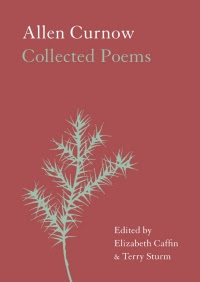 
A Symposium on the Life and Works of
Allen Curnow 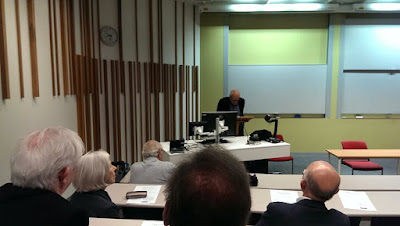 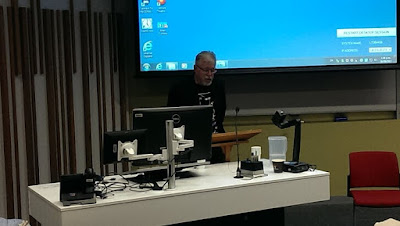 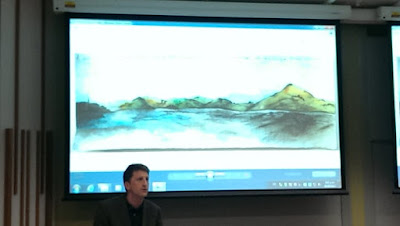 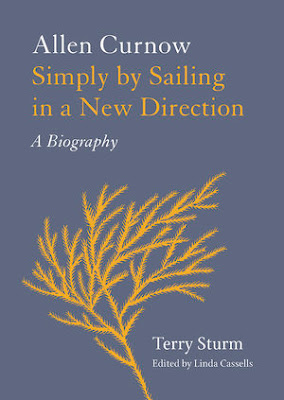 Terry Sturm: Simply by Sailing in a New Direction (2017)


So guess where I was yesterday ... One always approaches these events with a certain trepidation, I fear. I think you'll agree that the above list represents a pretty packed programme, but - as the prime mover of the whole affair, Alex Calder, remarked at the end - all the presenters "brought their A-game," and there was really never a dull moment in the whole day (not to mention an excellent lunch, which is more important than one might think for morale on such occasions).

There were numerous biographical revelations: Curnow's defiant contempt for homophobia, marching down Princes Street arm in arm with his theatre producer, who'd just been convicted of 'lewd acts,' in full sight of Auckland University's powers-that-were, was a particular high point (thanks for that detail, Paul Millar); and many of C. K. Stead's points about the 'authorised' nature of the biography were also shrewd and to-the-point. Michael Hulse, Jan Kemp and Elizabeth Smither contributed fascinating accounts of their very different friendships with both Allen and Jeny Curnow. 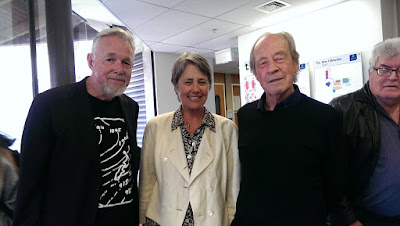 
The Academic papers were uniformly excellent. I particularly enjoyed the focus on his earlier work provided by Hugh Roberts, John Newton, Dougal McNeill and Mark Houlahan. At times they overlapped, at other times disagreed, but the combined picture they presented certainly helped me to understand a lot of aspects of his poetry which had hitherto been quite opaque to me. 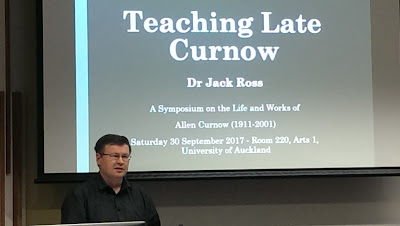 It's the later poetry, from the 1970s onwards, for which I myself feel a real enthusiasm (as I hope I revealed in my own paper on my strategies for teaching some of these poems to local students). Even here, though, there was much to learn. Roger Horrocks' ringing defence of the first book Curnow published after his long silence throughout the 1960s, Tree, Effigies, Moving Objects (1972), from the various accusations of 'roughness' and 'excessive obscurity' which bedevilled it at the time, was very persuasive, and Peter Simpson's analysis of two of these later poems both informative and charming. It tied in very well with Wystan Curnow's account of his father's long love affair with Italy, and - in particular - la città del sogno [dream city] itself, Venice, which Wystan interestingly contrasted with the Lyttelton of his childhood. 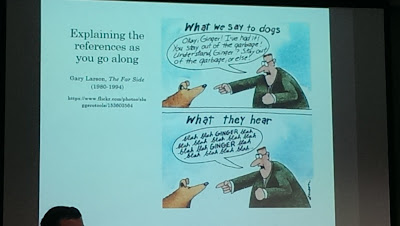 The perils of explaining all the references as you go along ...
[photograph: Jan Kemp]

What else? My Massey Palmerston North colleague Philip Steer had many interesting things to say about the environmental concerns of the 1930s, and the ways in which they manifest in Curnow's early poetry; Harry Ricketts analysed the 'coldness' many have claimed to detect in Curnow's 'post-Christian' poetry - which (I guess) places it alongside the work of such precursors as Eliot and Montale, as well as the more overtly present Wallace Stevens. John Geraets contributed a condensed overview of his thinking about Curnow over the years, grouped around certain predominant themes. 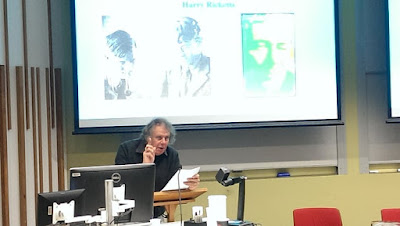 
There were some other voices I would have liked to hear. I would have liked Elizabeth Caffin and Linda Cassells to talk some more about their work on (respectively) the new collected poems and the biography. But since I was unfortunately unable to attend the booklaunch on Friday night, I suspect that they may have already discussed the subject there. It would have been interesting to hear some more details about it, though. 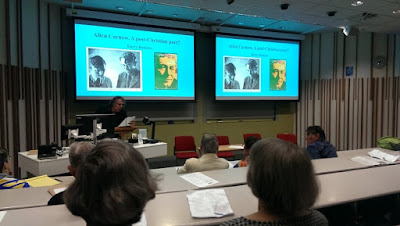 
All in all, it was a great day out, and a very fitting tribute to one of our most important and (I suspect) enduring poets.

Another important presence there (albeit in absentia) was that of the late Professor Terry Sturm, whom I knew pretty well when I used to work in the English Department. He was a very kind as well as a very brilliant man, and I have nothing but good memories of him (including a rather surprising speech in the Senior Common Room one day, after probably all of us had had a bit too much to drink, on the improbability of some of the more surprising claims made routinely in Penthouse forum ...). He was a good boss and a straight-shooting talker. I greatly enjoyed reading his biography of pioneering novelist Edith Lyttleton, and anticipate the same enjoyment from his work on Allen Curnow. 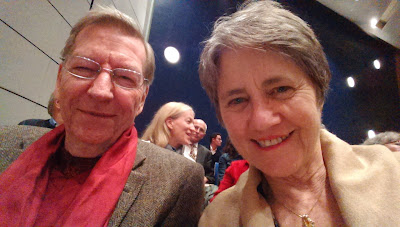 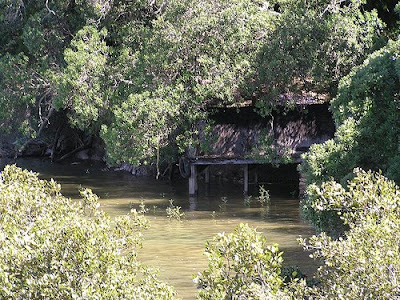 Comfortable
To creak in tune, comfortable to damn
Slime-suckled mangrove for its muddy truckling
With time and tide, knotted to the vein it leeches.


New Zealand is a very small country, still. It's strange how many connections you can find with people you hardly know at all (except by reputation). Does it matter? I guess not really. It's fun to table a few of them, though:

My father told me that as kids they stayed in a boarding house in Akaroa where the Curnow family were also guests. They didn't much take to Allen, he said, but they had a great time playing with his brother Tony (this must have been sometime in the late 20s, I imagine, when my grandfather was working as a teacher in Templeton, on the outskirts of Christchurch).

Then my English teacher at Rangitoto College, Mr. Lamb, had many reminiscences of Allen Curnow as a lecturer. He retired from Auckland University a few years before I got there, though. In fact the only time I ever spoke to him was one day in (I think) 1986, when I was in the English Department mailroom and he asked me for help with the fax machine. I had to admit that it was a mystery to me, too, so there went my chance of making a good impression.

The next time I remember seeing him was at a poetry booklaunch in the late 1990s, where my friend Leicester Kyle finally gave into our persuasions that he go over and speak to the great man. Leicester's father, Cecil, who also had poetic ambitions, had been a fellow reporter of Curnow's on the Press in Christchurch in the 1930s, and they had some nice chat about it. There was a suggestion that Allen might write a preface to a collection of Leicester's own poems, but nothing ever came of that.

Connections: I know that Shoal Bay seascape of "A Small Room with Large Windows" very well. My grandmother lived in Ngataringa Bay, just around the headland, and we grew up sailing around on boats and wading over the mudflats. I don't know the West Coast beaches nearly as intimately as Curnow did, mind you. Of course I've been to Karekare many times, but have only stayed overnight there once. Muriwai is my favourite of those wonderfully evocative beaches, perhaps because it's really just round the corner from Mairangi Bay.

Never turn your back on the sea.
The mumble of the fall of time is continuous. 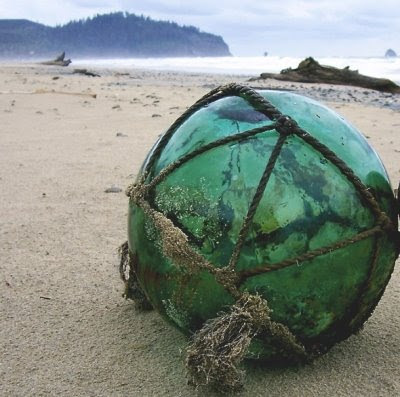 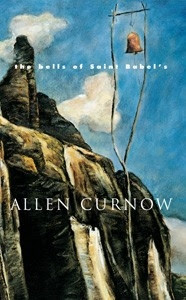 Curnow reached a kind of heightened and intense realism. I picked up, after some lectures about Stevens, that Curnow was clearly influenced by him. But he was also a friend of Dylan Thomas and some of Thomas's tone is into Curnow. Of course he had his own style. I met him first in 1968 when I studied English for one year. He lectured on Browning. His lectures were good and inspired me to read Browning. In fact I am slowly reading through 'Dramatis Personae' at the moment. I like his early things such as his poem about the leaf. It is a strange and haunting, and beautiful poem. But I have never been through all his books and worked out early or late styles. The poem that is the basis of that music by Lilburn and that stuff I don't like a s much as some of his other things.

It seems that he was always obsessed with death: in quite a dark way. I suppose I am also. Reading it in Curnow it does 'f--k with my brain' sometimes. (I quote Geraets once at Galbraiths, (Hamish Dewe responded, when I told him of G's view, said: "That's good."! BUT there is no doubt, he is was one of NZ's great poets.

Did he ever write AS a Christian? I think in a sense he was always a religious or a kind of philosophic poet. He played at times. Maybe influenced also by some of Stevens and WCWs.

I remain puzzled by his passionate reaction to M K Joseph's 'A Soldier's Tale' which book I liked when I read it and saw nothing wrong with it. I asked his son why Curnow wrote (Dichtung und Wahreit) the poem, and he said: "Well, he had no idea, he was never in a war."

He seemed to be almost fascinated by violence and killing more than he condemned it. I don't like the Moro assassination poems...nor do I side with him on his 'attack' on the Baader Meinhof. Gerhard Richter has a more subtle approach I feel.

It is good so much is being written on a NZ poet including the biography. I remember Terry Sturm. His lectures were good, as were those of Sebastian Black, Don Smith, and others.