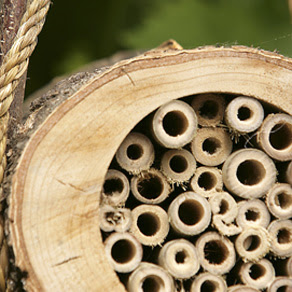 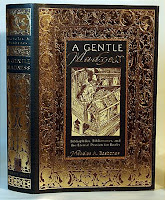 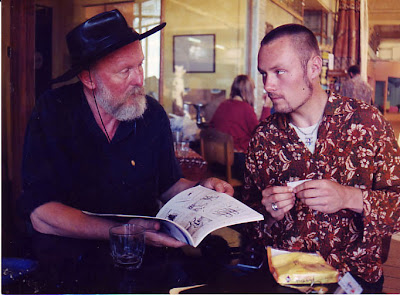 Happy Anniversary Imaginary Museum and well done on completing all those massive projects. I'm sure Leicester would be thrilled to see the online archive of his works that will allow so many people to read his wonderful poetry, and spare the trees at the same time. It's going to be splendid!

Congrats on the wood, Mr. Jack.

Let's hope you build a house from an Imaginary Museum.

That photo of Leicester was via Cornelius Stone? He might know. It looks as if it is at the front of the Alleluya. But I cant be sure.

I must write re L K and also try cataloging myself. Indeed I forget what where books are or if I have a copy. I even bought a book I already had about twice...one was poetry so I gave it to another poet! It might have been Michael!

Ah, good. Thanks a lot, Richard. Photographer Cornelius Stone, location Alleluya Cafe -- now if only I knew who the other guy in the picture was ...

Yes happy anniversary to the Imaginary Museum. I've enjoyed the wit and wisdom of your blog Jack.

Corn Stone writes in to say:

"Say, that photo with Lester is in Alleluya (as correctly noted) sometime in the mid-to-late 90s has a bloke called Oliver in it. They are just possibly related though I would not swear to it. (Lester is leafing through an anthology comic I published called UFO). "