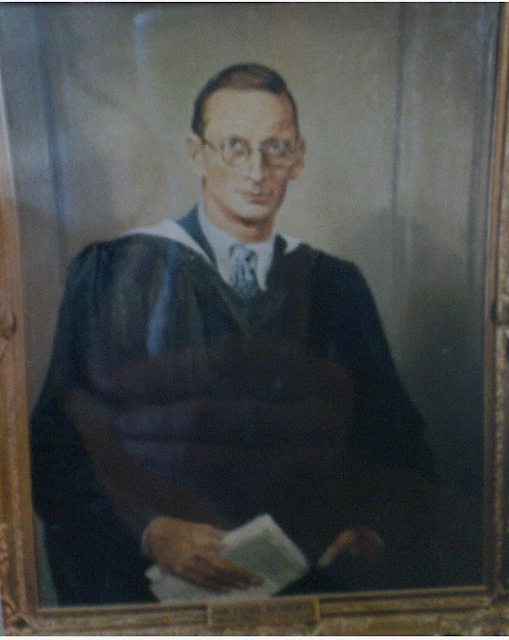 
I used to try to buy any stray volumes of collected poems I ran across in bookshops, on the off-chance that I'd be lucky enough to locate some submerged genius who nobody else knew about. This policy had somewhat mixed success, I must admit.

One of the most interesting such books I bought, however, was Michael Roberts' Collected Poems, way back in the 1980s sometime. 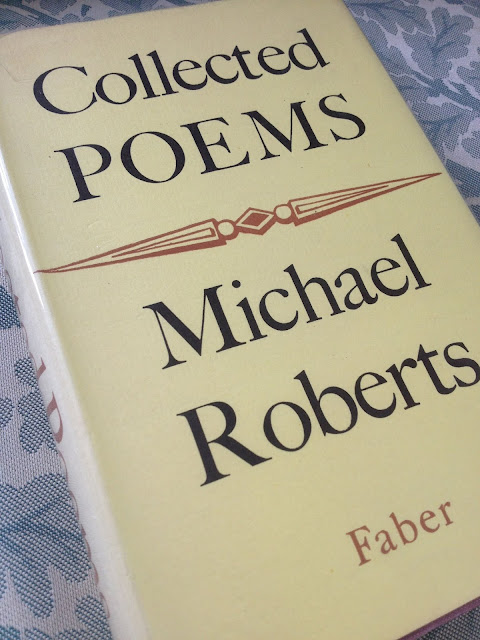 I didn't know anything much about him. It was a handsome Faber volume, with an introduction by the editor, his widow Janet Roberts - somewhat better known under her maiden name of Janet Adam Smith, a distinguished contributor to Scottish literature in her own right. 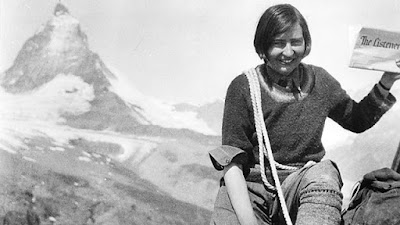 Here's one of the poems from the book:


This is the cave of which I spoke,
These are the blackened stones, and these
Our footprints, seven lives ago.

Darkness was in the cave like shifting smoke,
Stalagmites grew like equatorial tree,
There was a pool, quite black and silent, seven lives ago

Here such a one turned back, and there
Another stumbled and his nerve gave out;
Men have escaped blindly, they know not how.

Our candles gutter in the mouldering air,
Here the rock fell, beyond a doubt,
There was no light in those days, and there is none now.

Water drips from the roof, and the caves narrow,
Galleries lead downward to the unknown dark;
This was the point we reached, the farthest known.

Here someone in the debris found an arrow,
Men have been here before, and left their mark
Scratched on the limestone wall with splintered bone.

Here the dark word was said for memory’s sake,
And lost, here on the cold sand, to the puzzled brow.

This was the farthest point, the fabled lake:
These were our footprints, seven lives ago. 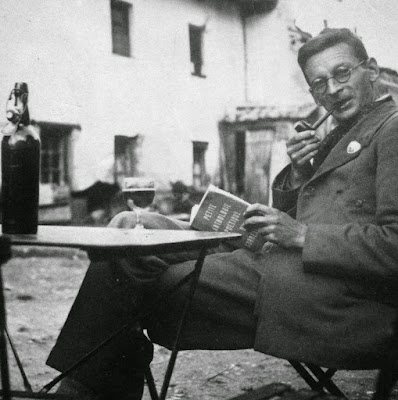 
There was a sort of studied simplicity about the diction: a concreteness and sureness of touch. The subject matter was interesting, too: lots about mountains, caves, climbing ... though I think the section of the book I liked best was his late sequence of poems about Chinghis [Genghis] Khan. 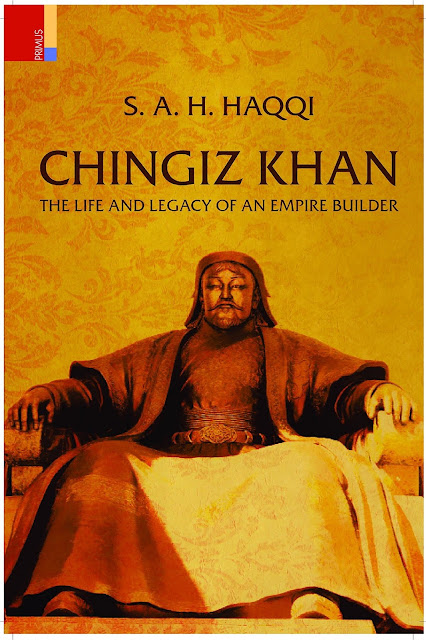 Chingiz Khan: The Life and Legacy of an Empire Builder (2010)

I guess that this must have been intended for broadcast on the radio, though I didn't realise that at the time. There were a lot of stage directions and details about the various voices the narrative was filtered through. It had an undeniable power to it, though:


Tchirek River runs
Under the Dark Mountain
Where the sky is like the sides of a tent
Stretched down over the Great Steppe.

The sky is grey, grey,
And the steppe is wide, wide:
Over grass the wind has battered low,
Sheep and cattle roam.

You can say that it's a bit like Matsuo Bashō's famous haiku:

Summer grasses,
All that remains
Of warriors' dreams

or, for that matter, Carl Sandburg's rather more protracted version of the same basic idea, "Grass":

I am the grass.
Let me work.

and that would certainly be true, and yet there's something extra there in Michael Roberts' poem - something about that evocation of the mountains, the steppe and the river which persuades us that he's been there - that there's nothing second-hand about his inspiration, however much it may recall other expressions of the same thought.

One thing's for certain. He doesn't sound anything like Auden - or like anybody else, really, except himself. 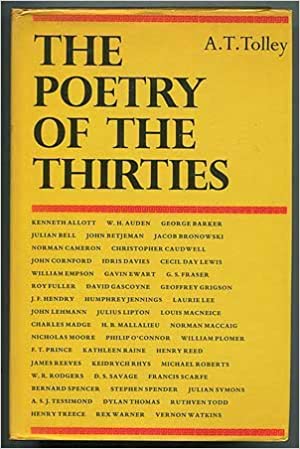 All of that, of course, was before I worked out what he was really famous for. You have to remember that these were the days before the internet, before Google and Wikipedia. All I really had to go on was the disconcertingly brief and gnomic entries in our copy of the latest (1975) edition of Oxford Companion to English Literature. 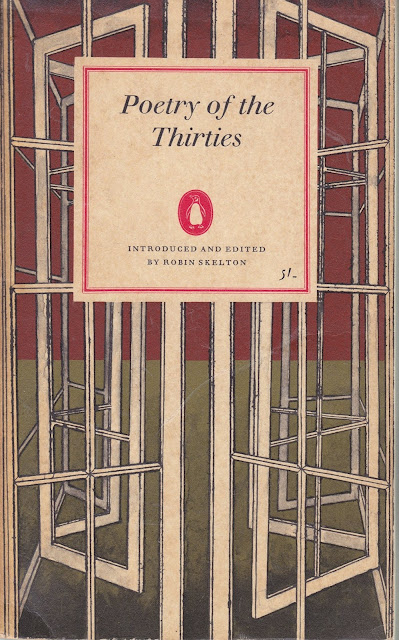 So, it seems that some time in the early thirties Leonard and Virginia Woolf's Hogarth Press was approached by a young schoolteacher, mountaineer (and ex-communist) called Michael Roberts who tried to sell them on the idea of a short anthology designed to show just what the new young poets beginning to emerge were getting up to.

The fact that one of the writers on the list was Virginia's ne'er-do-well nephew Julian Bell might well have been one of the factors that motivated them to agree. 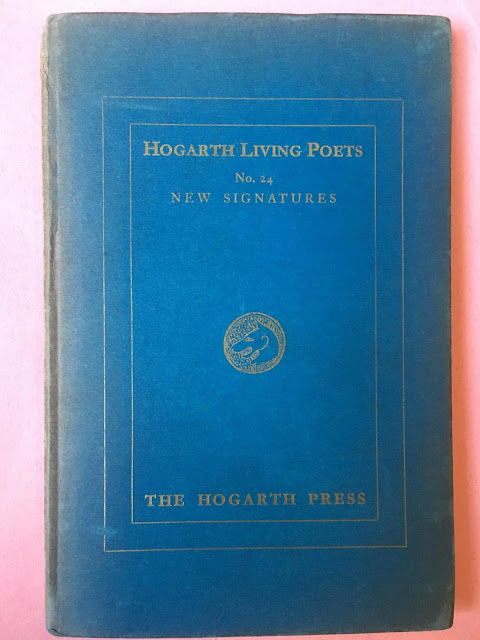 This was the result. It's quite a strange list, in retrospect: no MacNeice - and the choice of A. S. J. Tessimond may already have seemed a bit eccentric.

Nevertheless, it's probably better to concentrate on the successes than the failures. Auden was hardly known at the time. He'd only published one commercial collection: Poems (1930) - apart from a privately printed pamphlet produced by Stephen Spender on his handpress at home. The Orators was not yet out; nor was The Dance of Death.

Nor had Spender himself published a collection as yet. Only Day-Lewis had much under his belt, and he would later come to regard his three collections from the 1920s as mostly juvenilia. Roberts had published only one book of poems himself - and was probably best known for his reviews he and his wife had started to contribute to T. S. Eliot's Criterion.

Not all the reviewers were convinced. The young American poet T. C. Wilson [who he? - ed.] was content to remark: "the disparity between the intention and the published work is substantial."

Nevertheless, other reviewers and readers sat up and took notice of (in particular) Roberts's polemical introduction, in which he asserted 'that the modern poet could no longer write like Keats, rather he must take his imagery from urban and industrial civilization and "be abreast of his own times"' [cf Jason Harding, The Criterion: Cultural Politics and Periodical Networks in Inter-war Britain (2002): 160 et seq.]. 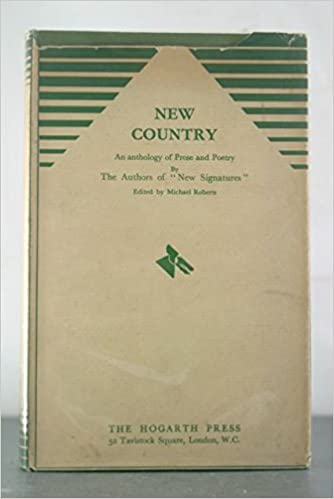 A year later, Roberts put out another, larger volume, offering both 'Prose and Poetry by the authors of New Signatures.' You'll note a few additions to the line-up: Richard Goodman, Charles Madge, and our old friend Rex Warner.

This was an even greater success, and led Eliot to commission a rather more substantial exercise in canon-building, one of the most influential poetry anthologies of the twentieth century, reprinted - in various versions - to this day, The Faber Book of Modern Verse: 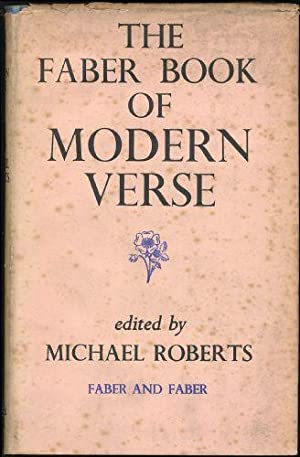 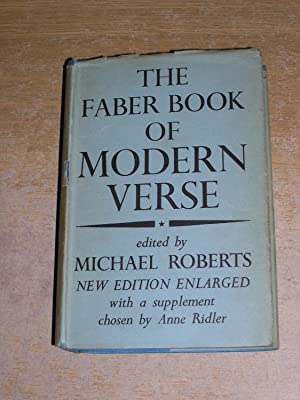 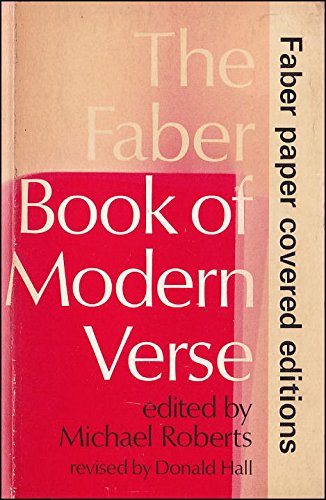 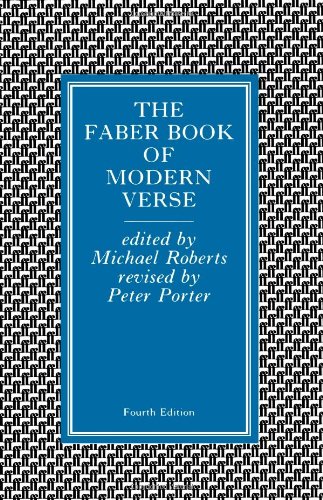 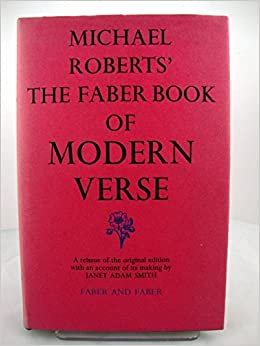 As you can see, the book has continued to be read from that day to this. It undoubtedly marks the high water mark of Roberts' influence, and of his publishing career. He continued to edit anthologies and publish poetry and books on science and current affairs, but the authors he'd been so successful in introducing to the public gaze went on to surpass him.

Like Louis MacNeice - and, for that matter, George Orwell - Roberts spent most of the war working for the BBC, broadcasting mainly to German-occupied countries. After the war he took up the post of Principal of the College of St Mark and St John in Chelsea, London. He died of leukaemia in 1948. His Collected Poems appeared, finally, a decade later.

So will he be remembered principally as an influential antbologist who also scribbled verse in his spare time, or as a poet who got diverted (briefly) into acting as the 'spokesperson for a generation'? Your guess is as good as mine. I suppose that it depends largely on whether you first encountered his work through the Faber Book of Modern Verse, or through the Collected Poems.

I read his poems before I read all those thirties-agenda-setting introductions, so I think of him mainly as a poet: a lover of the mountains and the open air, more at home on a cliff-face than a lecture room.

I, too, have had more success editing anthologies than through my own published collections of poems, so I suppose the answer is more important to me than it might be to most people. I can't help believing, though, that the work that you do can end up in unpredictable places, and I've taken much inspiration from the curt, cut-back idiom and concrete, tangible subject-matter of Michael Roberts.

Perhaps, as usual, it's best to allow the poet himself the last word:

On Reading Some Neglected Poets


This is a long road in a dubious mist;
Not with any groan nor any heard complaint
We march, uncomprehending, not expecting Time
To show us beacons.

When we have struggled on a little farther
This madness will yield of itself,
There will not be any singing or sudden joy,
But a load will be set down.

And maybe no one will ever come,
No other traveller passing that way,
Therefore the load we lifted will be left,
A milestone, insignificant. 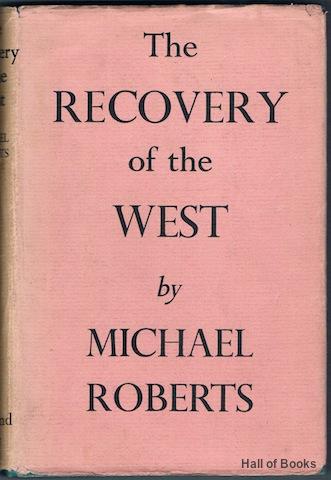 Michael Roberts: The Recovery of the West (1941) 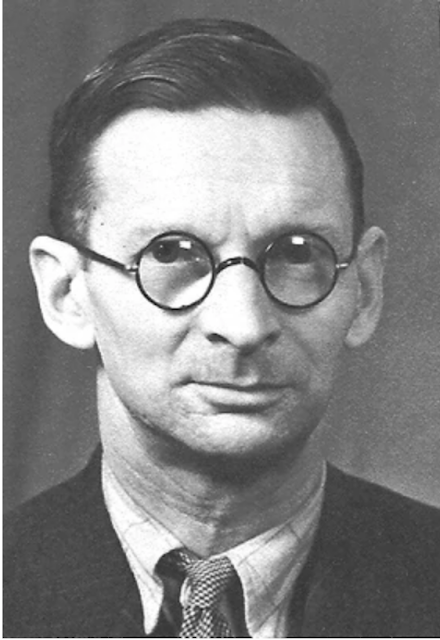 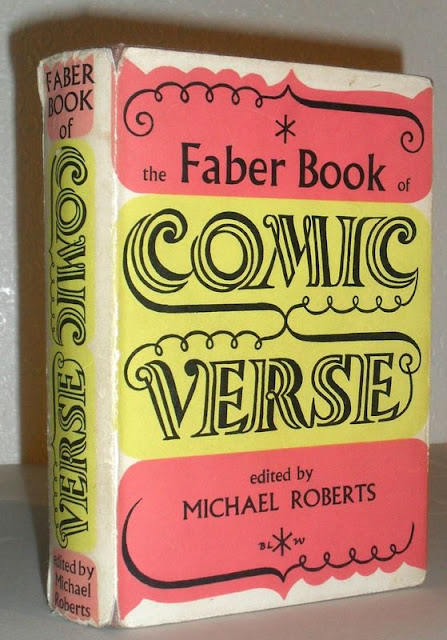