The Mysteries of Rotorua 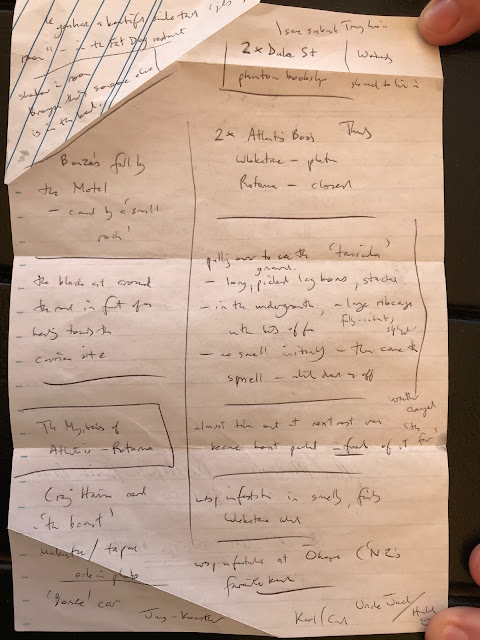 List of Strange Occurrences
(Unless otherwise noted, all photographs by Bronwyn Lloyd: 24-26/4/19)


Bronwyn and I had a very mysterious time of it on our recent excursion to Rotorua. This was not intended as a ghost-hunting expedition, but it certainly ended up that way. We seemed to be plagued the whole time by strange portents and coincidences ... 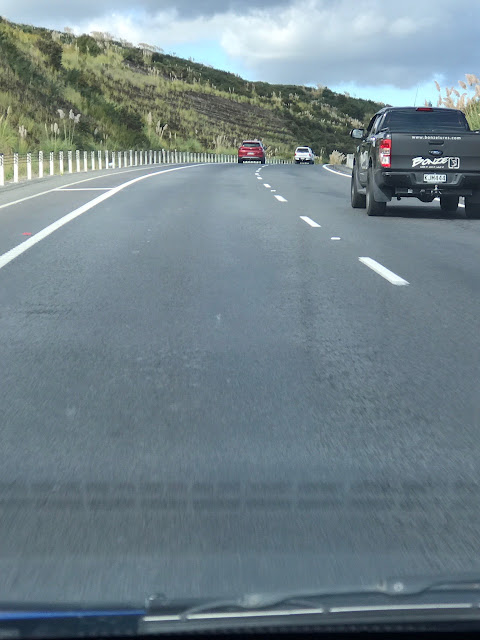 
Here's the first (and mildest) of them. If you look carefully at the car above, you can see the word 'Bonze' written on the back. 'Bonze' happens to be Bronwyn's childhood nickname (as well, of course, as an old name for a Buddhist priest). 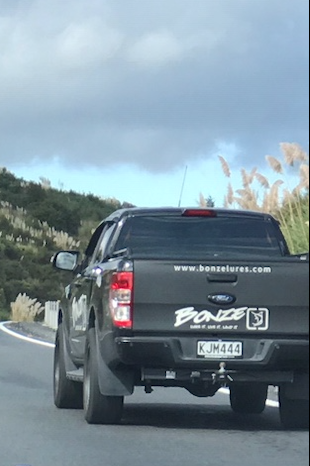 
Our plan was to drive down via Cambridge, as we'd heard from a friend that there was a good antique shop there, with lots of books and other treasures. The shop, Colonial Heritage Antiques was located at 40 Duke Street. Unfortunately google maps interpreted this as Duke St, Frankton (just outside Hamilton), so led us on a wild goose chase through the city.

Nothing daunted, we drove on towards Cambridge: 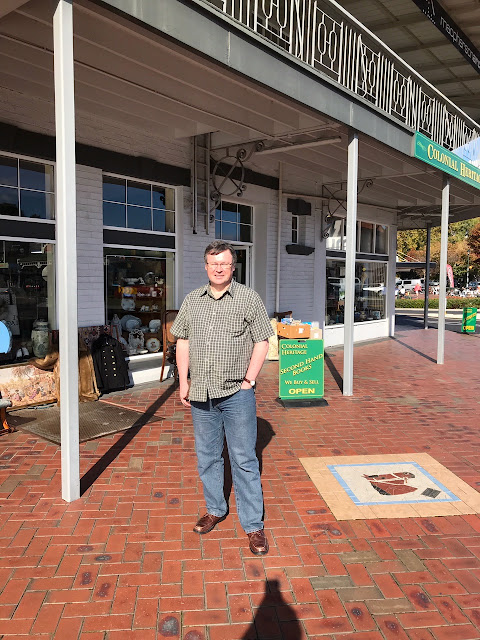 
Here I am outside Colonial Heritage Antiques (and, yes, I did pick up one or two books in there). You'll notice the strange orb-like illumination in the middle of my forehead. 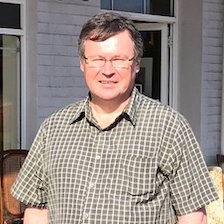 
I've included this detail of the shot to emphasise that this seems to me a fairly normal visual phenomenon - not at all like the one further down in this post ... 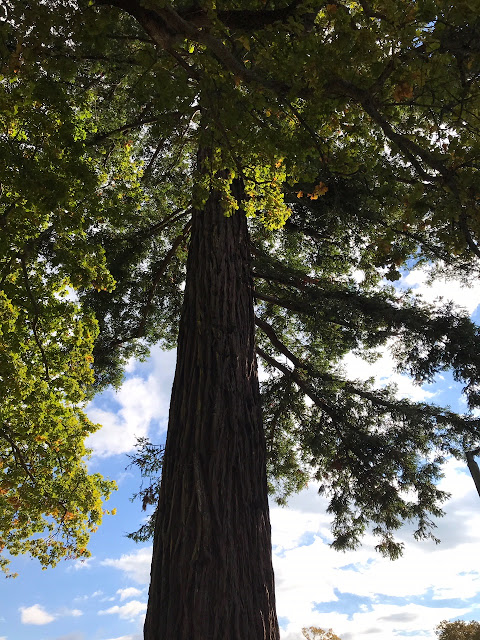 
We spent a pleasant evening in Rotorua on arrival there. Only one slightly strange thing happened. As we were sitting in the restaurant waiting for our meal, a woman came up to us and told Bronwyn what a lovely smile she had, and how it 'lit up the room.'

This was very nice of her, of course, but the point is that it has never happened before, and - but you'll have to wait for further comments on this event below. 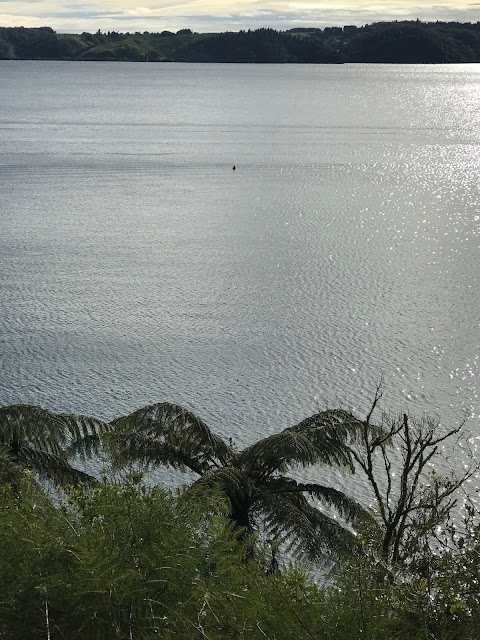 
We decided to do some sightseeing among the lakes, and stopped to take this rather suggestive shot of Lake Rotoiti as we were driving alongside it.

As she got out of the car, Bronwyn remarked on the little buoy visible in the picture, claiming that it looked like a taniwha, and could easily be made into a picture of Nessie or some other lake monster.

At that moment a motorboat roared by towing a water skier, and I said that if we waited for the wake to reach the buoy, it would look as if the little dark object was causing the waves. 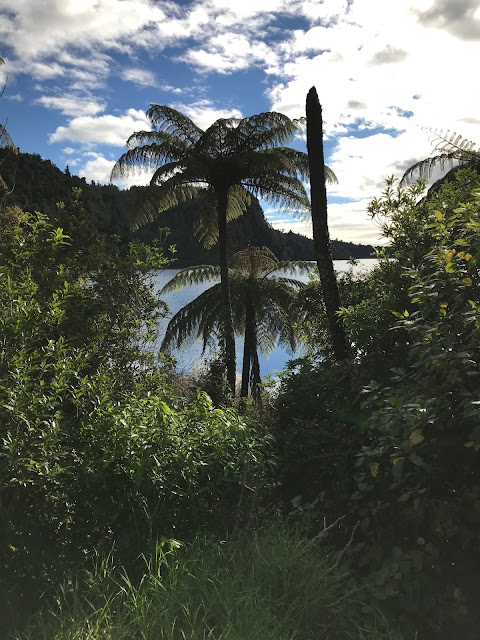 
Now I'd like you to look at the picture above very carefully. It was taken a moment after we noticed the bones.

I'd seen that there was a small stack of bones beside one of the trees when we arrived at the rest area (more of a pulling-over place, really). Now I began to see that they were quite large leg bones, and had definitely been gnawed by someone or something.

Bronwyn was standing a bit higher to take her shot, and she said that she could see a large ribcage, with some bits of fur and meat on it. It was much larger than a sheep's. We wondered if it might be a cow, or even a deer? It was about now that we were hit by the smell. 
Bronwyn was reluctant to photograph the bones themselves. A slight feeling of wrongness was already in the air for both of us. We felt like intruders in this place of death, and felt a definite anxiety to get away. It wasn't until much later in the day that we noticed the orb at the bottom of the photo. 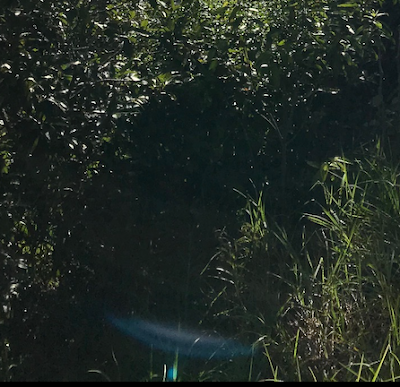 
So what is an orb, exactly? Anyone who's ever watched any ghost shows on TV will be familiar with these small visible disturbances on video and still photographic images.

Sceptics claim these are due solely to backscatter and other natural side-effects of photographic flash. Believers see them as the earliest intimation of an apparition or presence.

Certainly it's a little odd that this is the only one we've ever recorded (discounting the one above, outside the Cambridge shop), and that it was taken in one of the creepiest places we've been to.


If you look at it closely, it really is quite an odd thing. It looks almost as if something was trying to come through the picture at that moment.

At first we thought that someone might have stopped for a barbecue or a midnight feast at the spot, but there were no signs of fire, and the bones had definitely been chewed by teeth. 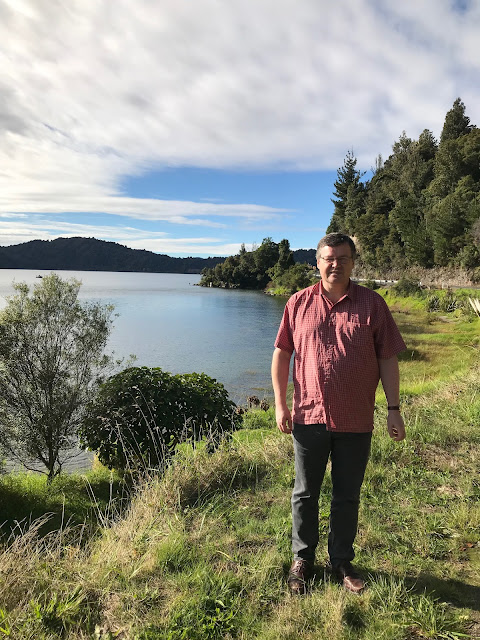 
Here's another shot of the green lake, Rotokakahi, a bit further down the road. As you can see, there's nothing odd in the shot - though we did almost get taken out by one of the incredibly aggressive local drivers who was tailgating me at the time.

It was almost, at times, as if they wanted to run us off the road, rather than simply to let us pull over and allow them to pass ... 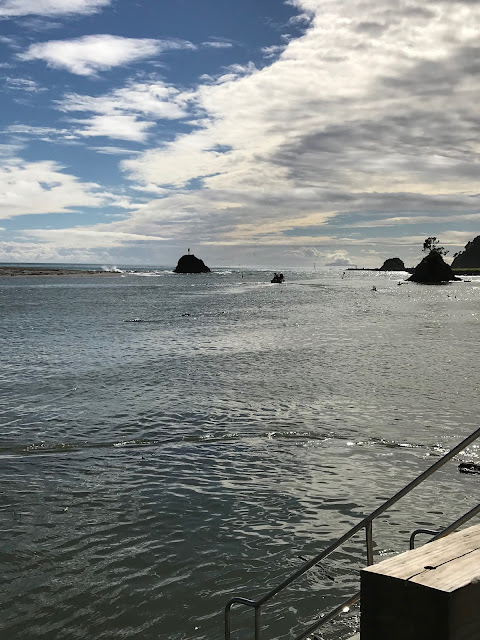 
Having gone so far, we decided to head on to the coast and check out Whakatane. Here's a shot from a little jetty and children's playground along the foreshore.

What it doesn't show is the omnipresent plague of wasps. Nobody else seemed to notice or react to them at all, but the moment we pulled up, they were buzzing around us, and (seemingly) trying to get into the car with us. 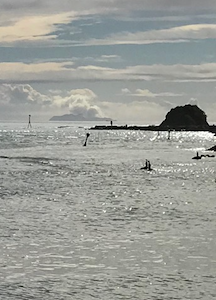 
We decided instead to drive a bit further along the coast and check out what's billed locally as "NZ's favourite beach", Ohope. 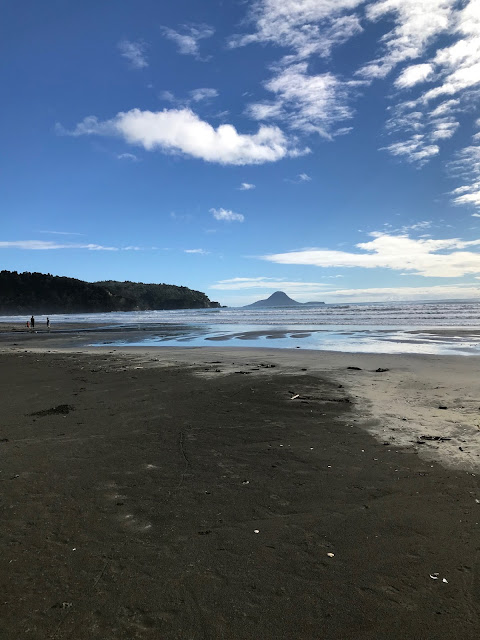 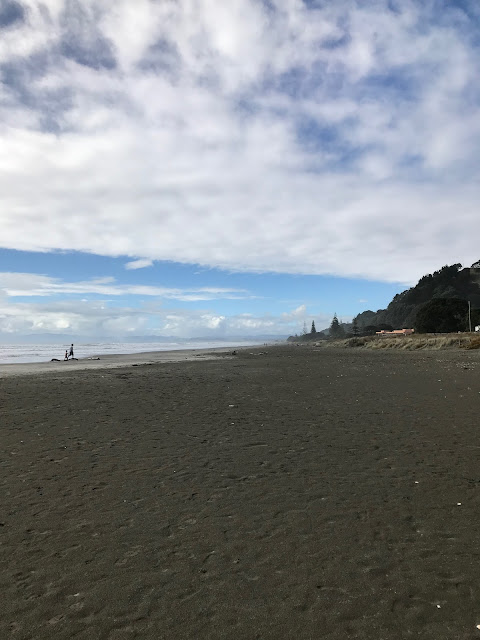 
And here's the view looking south.

Once again, the camera hasn't picked up the ubiquitous wasps. We rejected the idea of stopping for a coffee, and instead headed back to the big smoke, Rotorua.

On the way back we were looking out for the place where we'd seen those strange bones. Sure enough, just before we reached it, a black cat ran out across the road in front of us (narrowly avoiding a collision with the car in front). I know that that's good luck in some places, but it's bad luck in others.

Perhaps he was the one who'd been gnawing at them so assiduously. 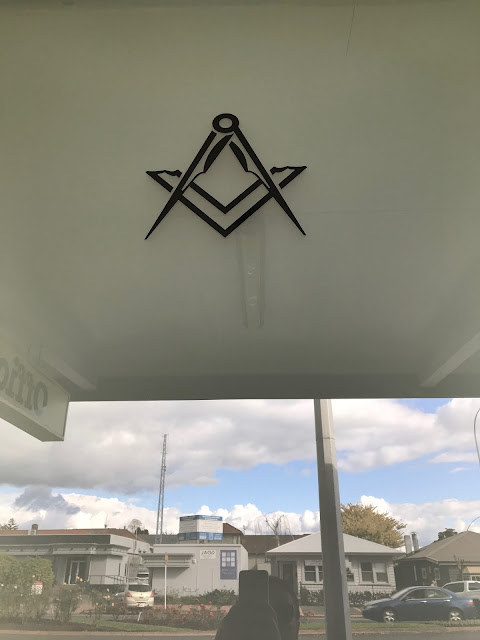 
Everything was closed in Rotorua. True, it was Anzac Day, but we'd hoped that a few shops might open in the afternoon, as they do elsewhere. No such luck. In particular, Atlantis Books, which I'd hoped to scope out, was clearly shut for the day.

Which brings me to another curious incident. Before leaving Whakatane, we saw online that there was a branch of Atlantis Books located there. We followed the directions, and got to the listed address, only to find - nothing.

For the second time in two days, our Australian-accented guide at google maps (whom we've nicknamed Kylie) had led us wrong. But she's hardly ever done so before - and never in so significant and patterned a way. 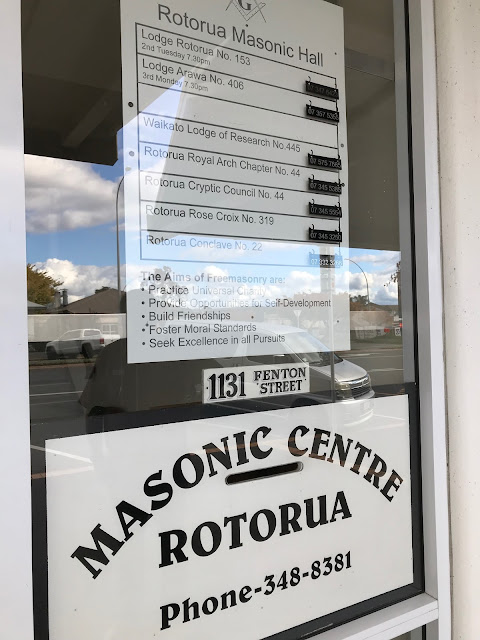 
The blank spot in this sign could be deciphered as once having advertised a'Geyserland Daylight Lodge'. I wonder just why it closed, and why all evidence of it had to be scrubbed out in this way? 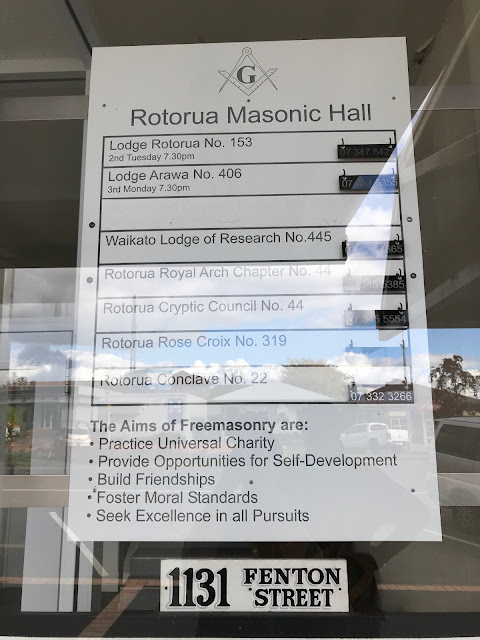 
With no shops open, we continued to wander. But Bronwyn had already fallen and skinned her knee when we set out to get some lunch, so we couldn't go too far.

There was a tiny pebble on the footpath which we concluded must have been the culprit - but really, it was as if she'd been pushed over by somebody, she went down so fast and hard. 
The gardens were (and are) somewhat spooky - even in the daytime. They're surrounded by lake weed and boiling mud pools, and seem as if they're only precariously maintaining their place on the foreshore. 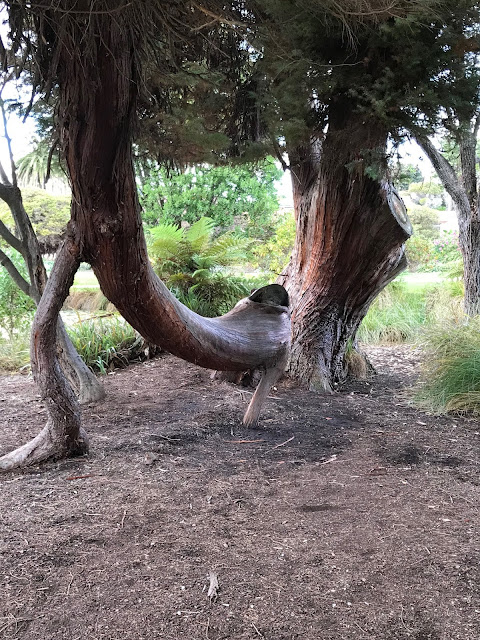 
And some of the trees look positively alive. 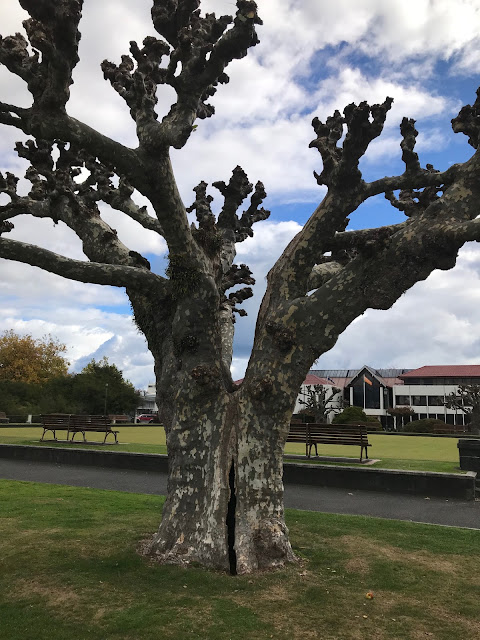 
Though it's hard to see how this one continues to survive. 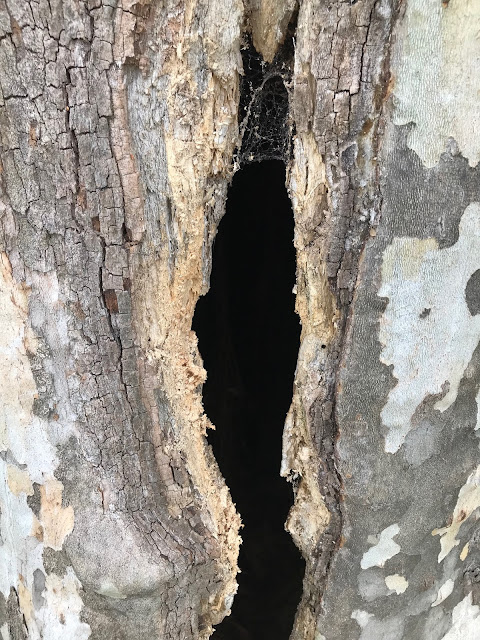 
What's lurking in there, I wonder? 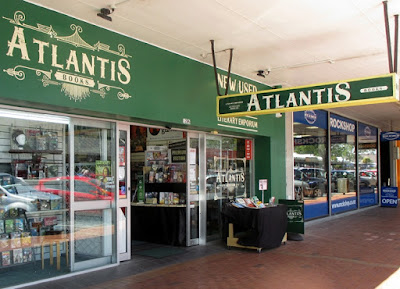 
Next day we duly went along to Atlantis Books, and had a high old time. As I was buying a stack of books at the counter, though, the owner asked me if I was in the trade?

'No, just a bibliophile,' I replied. 'I do teach literature, though.'

'I was looking at your picture online last night!'

'I've been thinking of doing some more study, and I was checking out the Massey website. And I saw you there.'

Just a coincidence, of course (and a very pleasant one), but there did seem to have been an awful lot of coincidences over the past couple of days. First someone came up and complimented Brownyn, and now someone claimed to recognise me from the internet ...

I don't know how familiar most of you are with Jung's theory of Synchronicity. Wikipedia defines it as:

a concept, first introduced by analytical psychologist Carl Jung, which holds that events are "meaningful coincidences" if they occur with no causal relationship yet seem to be meaningfully related.

Let's look a bit more carefully at our two days in and about Rotorua, at the heart of that mysterious region where not only thermal phenomena but pyschic ones, too, seem so close to the surface of things - a place of strange portals and openings into other realms:


Then there's the fact that I was sure I'd seen a shadowy figure in the corner of our room the first night, while Bronwyn felt that I'd taken off my shirt in the middle of the night (I can't have done, though, because it was on next morning). Was there someone else lying there in my place at some point?

For what it's worth, I feel a kind of a shadow came down over the day after we'd pulled over - and talked so frivolously and cheekily about 'taniwhas' and monsters - at that strange death-site. It was almost as if there were a tapu over the place, which we'd inadvertently offended against.

I hope that we worked it off in the course of the day. By next morning, everything seemed lighter, somehow. And our intentions were perfectly innocent. I'll be watching out for wasps and sudden falls over the next wee while, though.

And I'd counsel in general showing a certain respect in that area of the North Island. It is a genuinely strange place, and the superficial overlay of tourist sites has not really touched its atmosphere of old bloodshed and restless ghosts. 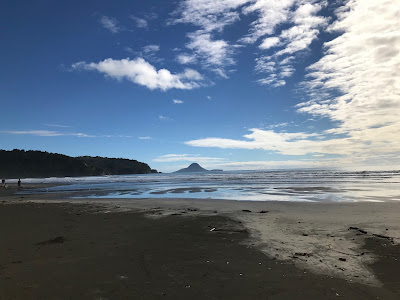