The Peripeteia of Frances Yates 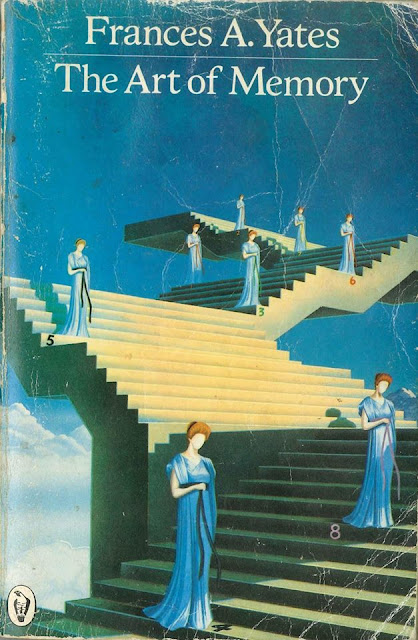 
And what, pray tell, does 'peripeteia' mean when it's at home?

a sudden reversal of fortune or change in circumstances, especially in reference to fictional narrative

is the best definition the online dictionary can provide.

I guess, in the case of Frances Yates, it refers to her transformation from an immensely learned but fairly dry-as-dust scholar of the intellectual life of the sixteenth and seventeenth century in Europe (with particular reference to the flourishing of hermetic and magical discourses in the allegedly proto-scientific late Renaissance) into a kind of pop culture guru: the High Priestess of the more respectable side of New Age Occultism. 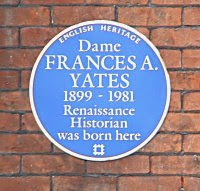 Her earlier books, on John Florio, the first translator of Montaigne into English (1934); Shakespeare (Love's Labour's Lost, 1936), and such apparently recondite subjects as The French Academies of the Sixteenth Century (1947) and The Valois Tapestries (1959), gave few signs of what was to come.

Reviewers were cautious about some of her 'wilder' conjectures, but for the most part she appeared just another habitué of Aby Warburg's superb library, transferred to England to avoid Nazi repression in 1933, and (as the Warburg Institute), affiliated with the University of London in 1944. 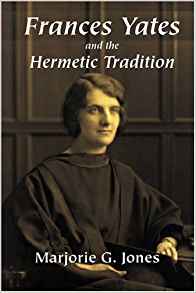 Frances Yates and the Hermetic Tradition (2008) 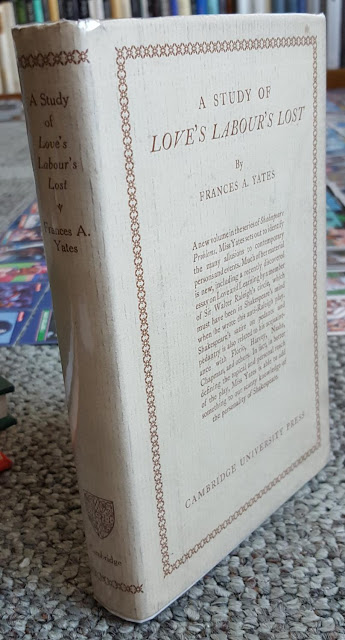 
The sea-change came with her next two publications: the double-whammy of Giordano Bruno and the Hermetic Tradition (1964) and The Art of Memory (1966). Wow! Talk about time, place and opportunity all coming together.

It was the age of The Morning of the Magicians (UK, translated as 'The Dawn of Magic': 1963 / US: 1964), Louis Pauwels' and Jacques Bergier's 1960 bestseller about the wilder side of twentieth century occultism. It all sounds familiar enough nowadays, but at the time most people had never even heard of the 'Vril Society' or the 'Thule Spceity" - let alone their philosophical connections with Nazism.

Le Matin des magiciens mixed up information about "conspiracy theories, ancient prophecies, alchemical transmutation, a giant race that once ruled the Earth, and the Nazca Lines" into what (in retrospect) seems a kind of blueprint for New Age nuttiness generally. Some of it may actually have been true, mind you.

It's not, I hasten to say, that Frances Yates's serious study of the memory systems of Ramon Lull and Giordano Bruno, and of the Renaissance Hermetic tradition generally had anything in common intellectually with Pauwels and Bergier's rather formless compendium of mid-twentieth century bugaboos and conspiracy theories, but it's impossible to deny that the same readers were attracted to both.

The Art of Memory in particular, outmoded though it may be in some few particulars fifty years after its publication, remains one of the most exciting books of intellectual history I've ever read. Its devotees are many, and the number of memory system addicts it has spawned must be many (even TV mentalist Derren Brown has claimed to practise its precepts). 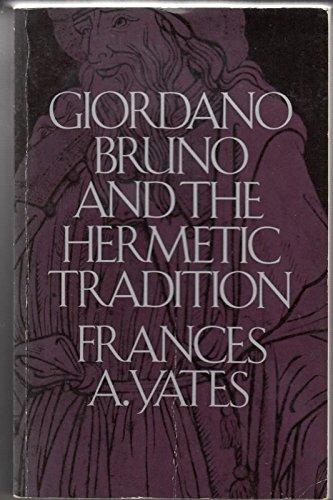 Giordano Bruno and the Hermetic Tradition (1964) 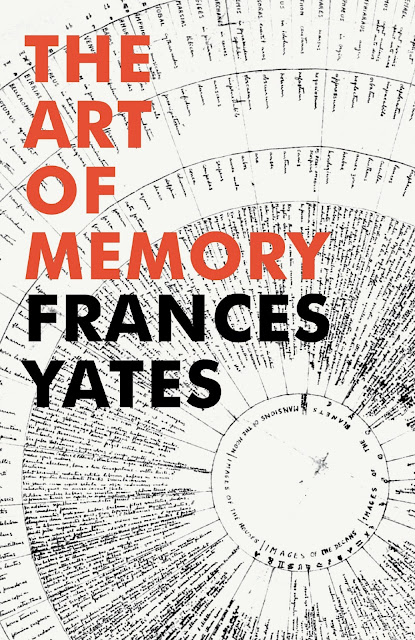 
All of which brings me to the second meaning of peripeteia in my title above.

I wish I could date it precisely, but it must have been sometime in the mid-1980s that I was browsing through Anah Dunsheath's Rare Books on High Street, when I stumbled across a little pile of books shoved to one side of the entrance to her shop.

They were, in fact, four. As well as the two books mentioned directly above, there were also: 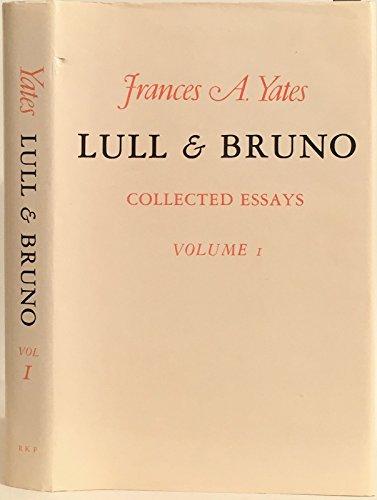 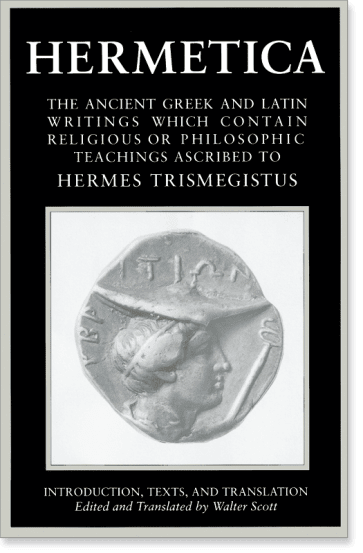 
All in all, it looked as if some budding Occultist had bought a bunch of exciting looking books about all sorts of esoteric matters, and had either found them too boring and abstruse for their taste, or else found a more desperate need for ready cash. Reader, I bought them.

Bought them and took them home with me and immediately started in on The Art of Memory and, really, nothing has been the same for me ever since. It was just so strange and fascinating: it gave an entirely new angle on classical antiquity, on figures as well known as Simonides and Cicero, but then - in the later chapters - it completely overturned any notions I'd had that Giordano Bruno had been a martyr to science, or that any number of my Renaissance heroes had been devoted to "reason" in any modern sense of the term.

It was, I must confess, a long time before I read the first part of her diptych, Giordano Bruno and the Hermetic Tradition, which seemed to me then (it doesn't now) a bit anticlimactic after the highs of The Art of Memory. Nor did I get very far with the rather boring translation of the Hermetica. The book of essays, Lull and Bruno, was very good value indeed, though, and offered a whole series of new perspectives on this matter of the Hermetic tradition.

There is a certain amount about Ramon Lull in The Art of Memory, but the essays collected here gave a glimpse of her mind at work: her painstaking way of collecting evidence, venturing conjectures, and building on them to make immensely pleasing - if not always entirely convincing - wholes.

Anyone who's at all familiar with my own fiction (a somewhat select group, admittedly) will have observed the pervasive Yatesian influence. It's particularly strong in my first two novels, Nights with Giordano Bruno (the title is a bit of a giveaway), and The Imaginary Museum of Atlantis (which lent its name to this blog), but also in the novella Trouble in Mind (2005).

After that the fever subsided a bit, but Frances Yates still is my go-to gal when it comes to any kind of abstruse or coded information. Her work has its ups and downs, definitely, but basically I consider her both completely intellectually honest and greatly gifted creatively - the models she came up so regularly with in her works of intellectual history have a huge mythopoetic force to them.

Her later work is more of a mixed bag. It was assured of a much wider sale than most historians of ideas enjoy, which led to jealousy from less fortunate colleagues. It also, at times, advanced some rather dubious conjectures on such subjects as the underlying design of Shakespeare's Globe theatre, and the precise influences at work in the court of King Frederick of Bohemia (whose ousting from the throne led directly to the Thirty Years War in Germany).

Here are her five late books, copies of all of which I've collected along the way: 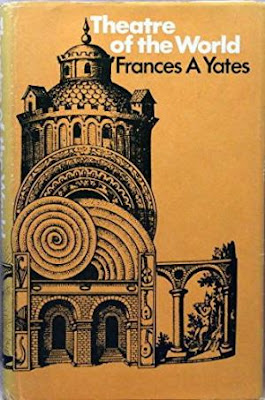 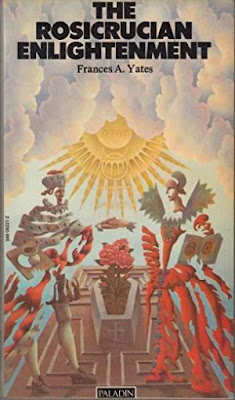 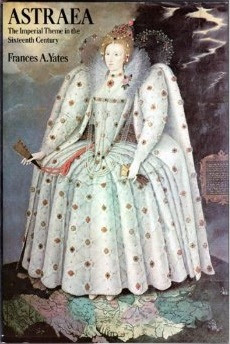 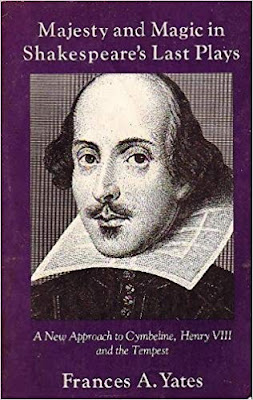 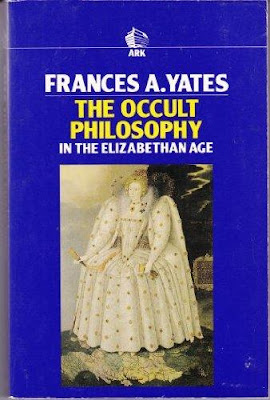 The Occult Philosophy in the Elizabethan Age (1979)

It's hard to avoid the conclusion that she was having fun in these last books. They touch on all the themes dear to her heart, and they're all exhaustively researched, and yet they're not quite so convincing as the best of her mature work. The Rosicrucian Enlightenment, in particular, is a dazzling read. Whether or not "Christian Rosenkreuz" and the various strange letters circulating around the continent in the early seventeenth century can really be explained by reference to the politics of the Holy Roman Empire may seem doubtful at times, but certainly nobody else has succeeded in making more sense of that strange tangle of esoteric philosophy and partisan religious politics.

Similarly, I'm not sure that she proves her point about the shape and structure of Shakespeare's various theatres, but she brings in Robert Fludd, John Dee, and an awe-inspiring range of learning which gives one some idea of just how complex and delightful such intellectual puzzles can be.

Nowadays, of course, these things have been vulgarised and made ridiculous by such absurd gallimaufries of half-digested platitude and pointless factoid as The Da Vinci Code and its progenitor The Holy Blood and the Holy Grail. When Yates was writing, though, one could still theorise without the haunting shadow of Indiana Jones, Robert Langdon, and Benjamin Gates (from National Treasure).

By contrast, it's never safe to assume that Yates has gone out too far on a limb, or that she doesn't really know what she's talking about. All of her books, in the final analysis, constitute tentative suggestions for future researchers in the field. She's no crank, but is always evidence-driven and willing to change her mind as and when new facts and theories emerge.

I've often dreamed of completing my Frances Yates collection: buying up all the older books I don't have, as well as the remaining volumes in her collected essays. They are quite expensive, for the most part, though, so I guess I'm still waiting for some blessed windfall like that day 35-odd years ago when I bent over to look at a stack of dusty-looking books on Anah Dunsheath's floor. 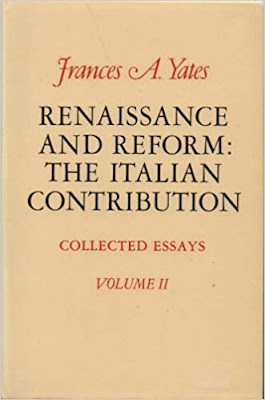 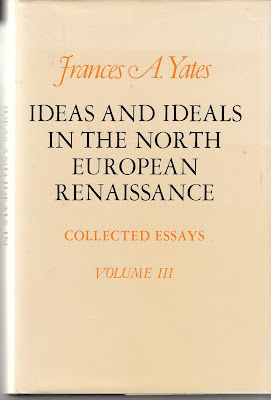 Frances Yates: Ideas and Ideals in the North European Renaissance (1984) 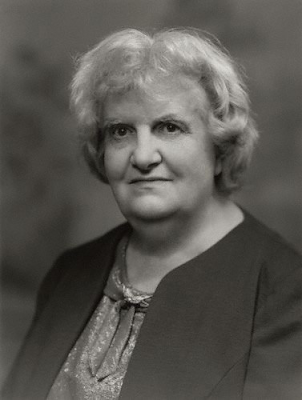 Thank you :-) I have only recently heard of Yates via spending a fortune on a book on commonplacing and reading the footnotes :-) I splurged my ill digested thoughts here.

There is work to do about bringing these strands together:-) are many of the problems we have because we don’t think through the influences? A recent work on epigenitics reads like a classic hermetic transformative work, the way we talk of genetics and electric cars solving all the worlds issues does sound like summoning angels and demons:-)

Jonathan Miller, whom you mention in your post, is a renaissance man if ever there was one. A trained medical doctor, specialising in neuro-science, he was also a stage comedian - one of the creators of the 1960s 'Beyond the Fringe' show. He doubled as a theatre and film director - though he later specialised in Opera productions in particular.

He's one of those people sent to Earth to make the rest of us feel small ...