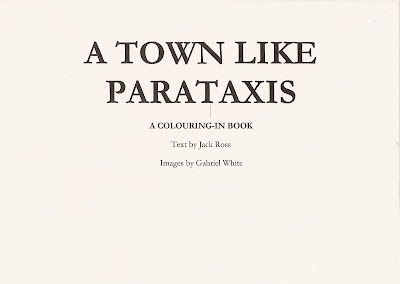 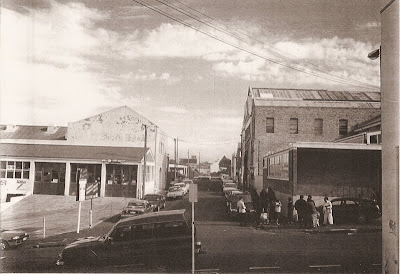 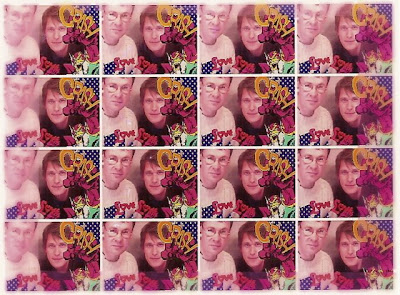 Oh, and if you're curious to see more in the same vein, I've also posted the entire text of a proposed book version of The Britney Suite which Gabriel and I put together a couple of years later, in 2003, but which never actually ended up seeing the light of day until now.
Posted by Dr Jack Ross at 8:55 am 4 comments: 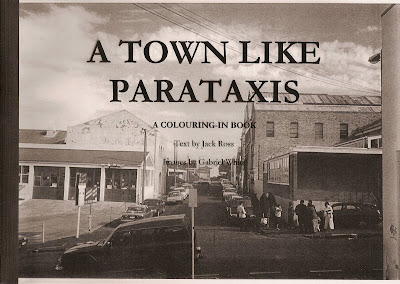 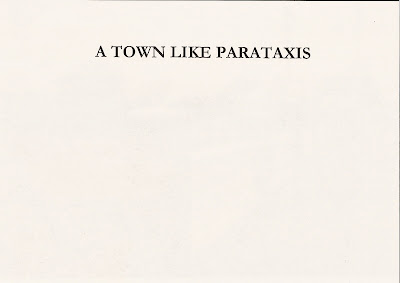 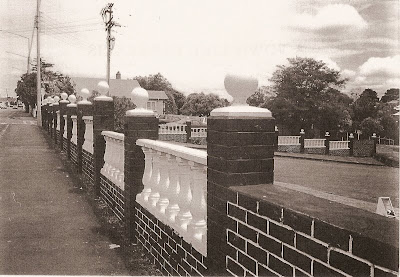 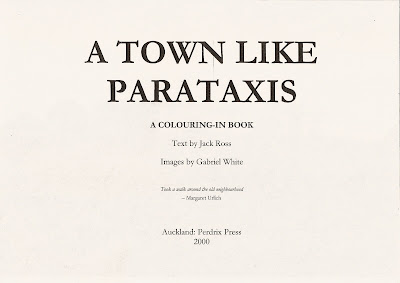 
Took a walk around the old neighbourhood
– Margaret Urlich 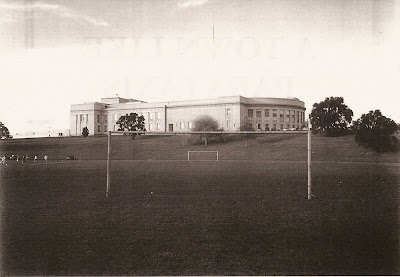 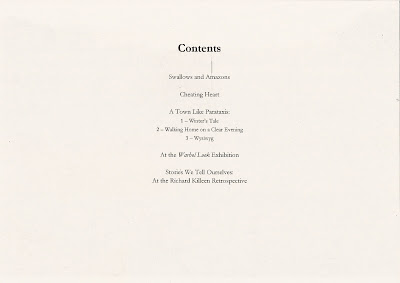 A Town Like Parataxis:
1 – Winter’s Tale
2 – Walking Home on a Clear Evening
3 – Wysiwyg

Stories We Tell Ourselves:
At the Richard Killeen Retrospective
Posted by Dr Jack Ross at 8:54 am No comments: 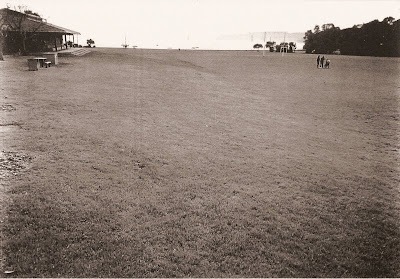 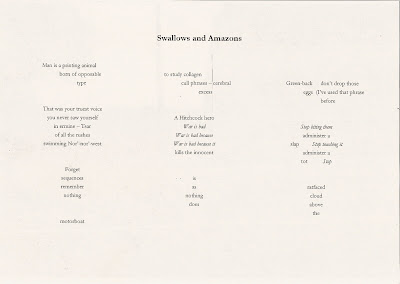 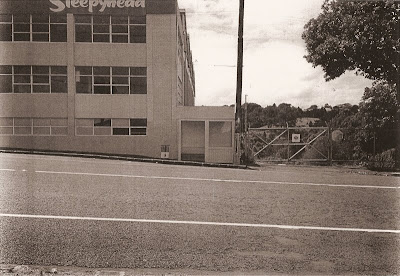 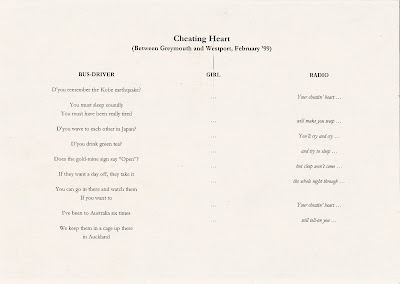 D’you remember the Kobe earthquake?
…Your cheatin’ heart …
You must sleep soundly
You must have been really tired
…will make you weep …
D’you wave to each other in Japan?
…You’ll cry and cry …
D’you drink green tea?
…and try to sleep …
Does the gold-mine sign say “Open”?
…but sleep won’t come …
If they want a day off, they take it
…the whole night through …
You can go in there and watch them
If you want to
…Your cheatin’ heart …
I’ve been to Australia six times
…will tell on you …
We keep them in a cage up there
in Auckland 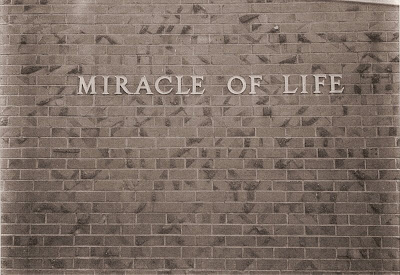 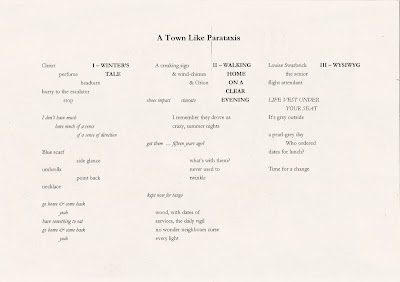 I remember they drove us
crazy, summer nights

got them … fifteen years ago?

what’s with them?
never used to
twinkle

wood, with dates of
services, the daily vigil
no wonder neighbours curse
every light

LIFE VEST UNDER
YOUR SEAT
It’s grey outside

a pearl-grey day
Who ordered
dates for lunch?

Time for a change 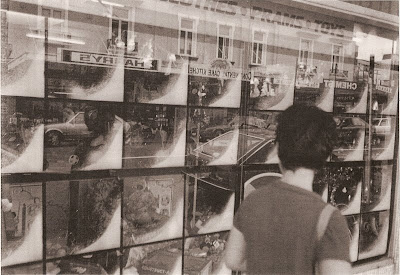 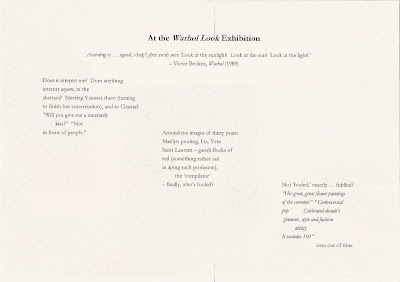 Does it interest me? Does anything
interest anyone, in the
abstract? Meeting Vanessa there (turning
to finish her conversation), and to Chantal:
“Will you give me a mustardy
kiss?” “Not
in front of people.”


Around me images of thirty years:
Marilyn pouting, Liz, Yves
Saint-Laurent – garish flocks of
red (something rather sad
in aping such profusion),
the ‘compilator’
– finally, who’s fooled?


Not ‘fooled,’ exactly … fiddled?
“His great, great flower paintings
of the seventies”“Controversial
popCelebrated decade’s
glamour, style and fashion
ability
It includes 500”
icon out of time 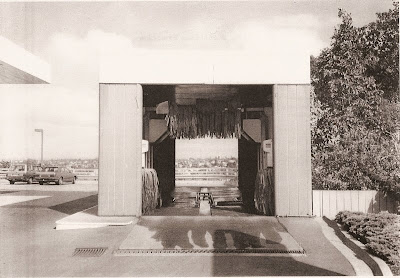 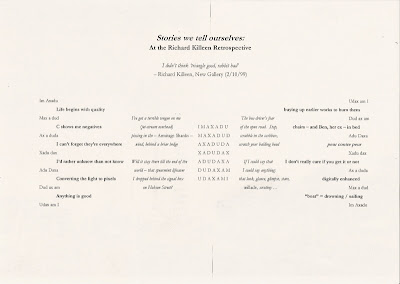 Stories we tell ourselves:
At the Richard Killeen Retrospective

Im AxaduUdax am I
Life begins with qualitybuying up earlier works to burn them
Max a dudI’ve got a terrible tongue on meThe bus-driver’s fearDud ax am
C shows me negatives(jet-stream overhead)I M A X A D Uof the open road. Stop,chairs – and Ben, her ex – in bed
Ax a dudapissing in the – Armitage Shanks –M A X A D U Dscrabble in the cashbox,Adu Daxa
I can’t forget they’re everywherewind, behind a briar hedgeA X A D U D Ascratch your balding headpeur contre peur
Xadu daxX A D U D A XXadu dax
I’d rather unknow than not knowWill it stay there till the end of theA D U D A X AIf I could say thatI don’t really care if you get it or not
Adu Daxaworld – that spearmint lifesaverD U D A X A M I could say anything:Ax a duda
Converting the light to pixelsI dropped behind the signal boxU D A X A M Ithat look, glance, glimpse, stare,digitally enhanced
Dud ax amon Hobson Street?œillade, scrutiny …Max a dud
Anything is good“boat” = drowning / sailing
Udax am IIm Axadu 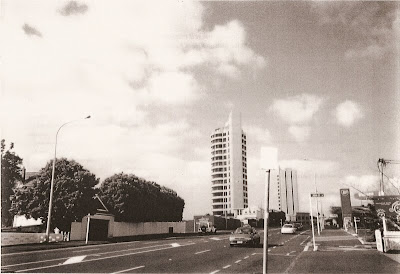 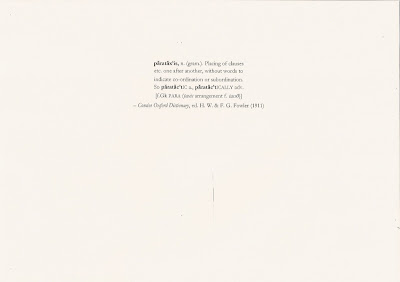 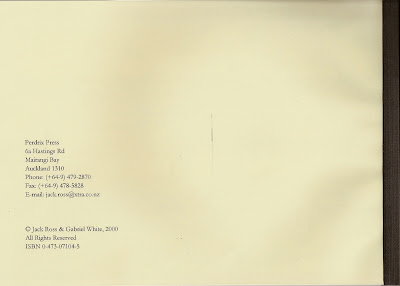 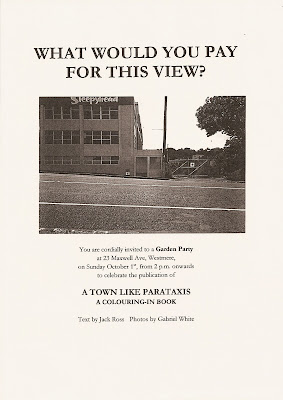 WHAT WOULD YOU PAY
FOR THIS VIEW?

You are cordially invited to a Garden Party
at 23 Maxwell Ave, Westmere,
on Sunday, October 1st, from 2 pm onwards
to celebrate the publication of 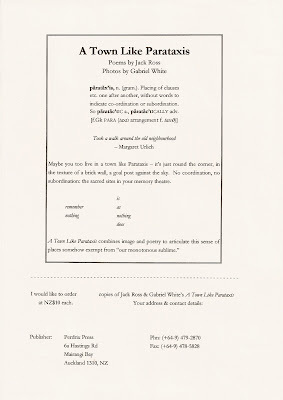 păratăx’ĭs, n. (gram.). Placing of clauses
etc. one after another, without words to
indicate co-ordination or subordination.
So păratăc’tIC a., păratăc’tICALLY adv.
[f.Gk PARA (taxis arrangement f. tassō)]

Took a walk around the old neighbourhood
- Margaret Urlich

Maybe you too live in a town like Parataxis - it's just around the corner, in the texture of a brick wall, a goal post against the sky. No coordination, no subordination: the sacred sites in your memory theatre.

A Town Like Parataxis combines image and poetry to articulate this sense of places somehow exempt from "our monotonous sublime."