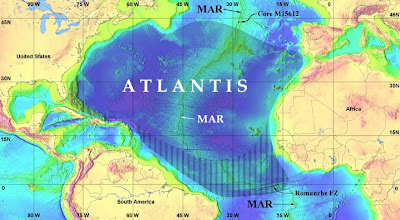 [The Hutton Commentaries]
The epic battle against recidivism at the Dargaville Museum outlined in a series of recent posts on Reading the Maps (and rather amusingly replied to on Art, Life, TV, etc.) has got me to thinking about the whole subject of fakes and fakery in general.

Why is it I'm so instinctively drawn to books of pseudo-history and ridiculously unlikely theories propounded by ignoramuses?

Did you know, for instance, that the "appearance of mu" in the word "Pounamu" defines it "as a religious relic from Lemurian times"? I bet you didn't. And yet it must be so, because I read it in a book, a most entertaining and interesting volume entitled The Atlantis Encyclopedia, by Joseph Frank (Franklin Lakes, NJ: New Page Books, 2005), pp.228-29. Frank's book contains a foreword by Brad Steiger, a veteran in the field, and author of the celebrated Atlantis Rising (1973), among many other volumes. Atlantis Rising has a most intriguing passage in it which he considers the possibility that Atlantis may be all around us even as we speak! 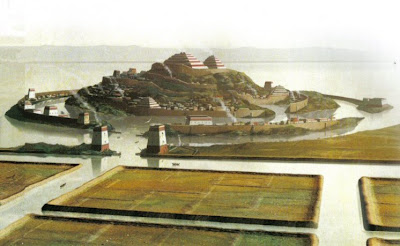 [Atlantis in the Andes]

As far-fetched as it may seem, for one moment consider that the incredible technology of Atlantis was able to step up the individual frequency of every man, woman, and child, every rock, flower, tree, and the very earth of their island continent and translate them into the fourth dimension.

Atlantis did not sink below the earth in a single day of an antediluvian cataclysm: Atlantis trembled for twenty-four hours as incredible machines raised its vibratory rate until it could materialise in another spectrum of tangibility and establish itself in another space-time continuum.

Atlantis may be all around us and may be entered through certain window areas of dimensional interpenetration.

Don’t be in a hurry to find such an ultra dimensional door, however; a single day in Atlantis may be equal to a month, a year, a decade in our own space-time continuum.
[Brad Steiger, Atlantis Rising. 1973 (London: Sphere Books, 1977): 136-37]

Rather a lot of "mays" and "mights" and other uses of the conditional tense in that extract, don't you think? Why might a day in Atlantis be equal to a month, a year or a decade in our own "space-time continuum"? Because that's what happens in the Narnia books? Or just because it's kind of fun to imagine it? (You never know, maybe future film-rights might be based on the idea ...)

Steiger has his tongue firmly in his cheek, I suspect, unlike his acolyte Joseph Frank, whose solemn, po-faced entries on such subjects as "Wai-ta-hanui" ["New Zealand's oldest known tribe, said to have arrived more than 2,000 years ago ... The Waitahanui were supposed to have been prodigious mariners who navigated the world in ocean-going sailing ships, and raised colossal stone structures, of which the Kaimanawa wall is the last surviving example." (p.287)] or "Mu" ["Atlantis and Mu engaged in some cultural interchange, but the peaceful Lemurians mostly regarded imperialist Atlanteans with a veiled mixture of dread and contempt." (p.188)] would be guaranteed to raise the hackles of Maps and all his PC archaeological buddies.

Why the hell do people write this kind of drivel?, I ask myself as I leaf through my little library of Atlantiana & Lemuriosity. I know why they publish it - because it sells. Which must mean that people enjoy reading it. Do they believe it? Not all of them can be postmodernist game-players addicted to the spurious and kitschy (which I suppose is my melancholy motivation for collecting it), but I doubt they're all credulous Trekkies and star-children, either. it's a kind of region of speculative semi-fiction, I suppose. Nice to read about and indulge in as a kind of "what-if."

Fundamentally, though, I think its appeal is based on mistrust. We don't really feel we can rely on "experts" any more. Too many cases of intellectual fraud and self-interest in the academic and scientific establishment have left them (or us) with about as much street-cred as so many used-car salesmen (or politicians, to take it down a couple of rungs). "Who pays your salary?" is - unfortunately - the only relevant question to ask of most "authorities": in court, in the lecture room, in print, or anywhere else for that matter.

At least cranks' motivations tend to be fairly easily discoverable - when they're not already firmly emblazoned on their sleeves. Don't get me wrong. I don't mean that I take a sympathetic interest in the views of neo-Nazis or Holocaust-deniers (or neo-Colonialists, for that matter) - but that's not because they're ill-informed idiots, it's because of the sheer horror of the crimes they're attempting to palliate. I'd say the same for apologists for Stalin or Mao, for that matter. Or any other gloomy old tyrant or mass-murderer. Sorry Mr Dolan, but I'm not too impressed by the morals of Genghis Khan, either ...

People who read books about Atlantis and the Martian pyramid and NASA's great Moon-landing hoax are not necessarily idiots (or if they are, then I'm one too - which might not be too much of a stretch for regular readers of this blog). They read them because they're halfway convinced already that everything told them by officialdom is a lie if not the result of a conspiracy. What else are they to think when big US companies have started paying their executives billion-dollar bonuses again before the ink is even dry on the blank cheques paid over to them by Congress? That we can trust our Lords and masters? That they have our best interests at heart?

Anybody who'd like to investigate further the relationship between literary fakes and the standard tropes of postmodernism could do worse than read Ken Ruthven's fascinating and provocative Faking Literature (Cambridge: Cambridge UP, 2001), where he goes through all the various scandals where allegedly "indigenous" writers ('B. Wongar', Helen 'Demidenko' [Darville]) have been praised to the skies for their sensitive and nunanced portrayals of alternate world-views, then "caught out" and denounced for their clumsy impostures a few months later.

The books hadn't changed. They still had the same fixed arrangements of white space and black letters as before. The only thing that had changed was the shitheads composing the reviews. So much did they hate being exposed as credulous dupes and tone-deaf critics, that they had to react with swift disproportionate rage to avoid exposing the whole nonsensical ramp of "established artistic reputations" altogether.

Funnily enough, I found Ruthven's book, virtually brand-new, on the chuck-out pile at Auckland Central Library, priced at one dollar, so maybe somebody inside that august institution felt a little queasy about its implications. Call me paranoid, but ...

No, seriously, the subject is clearly a complex one. But you can't go on teaching people to distrust fixed ideas and commonplaces, to test out ideas for themselves, and then expect them to except all the ideas you're trying to peddle to them. You know you're right - that your ideas are sound, well-researched, academically respectable. But why should they accept it on your say-so? It may be worrying to watch people reading books about Celtic NZ and the Chinese influence on the Italian Renaissance instead of "sound" historical research - I find it extremely irritating seeing people reading Jeffery Archer instead of trying to penetrate my own portentous and labyrinthine tomes - but you can't really blame them sometimes.

Why are they doing it? What do they find in these books? Those, I think, are the questions we should be asking instead. 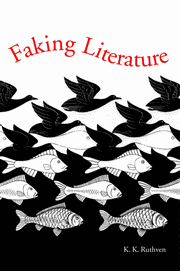