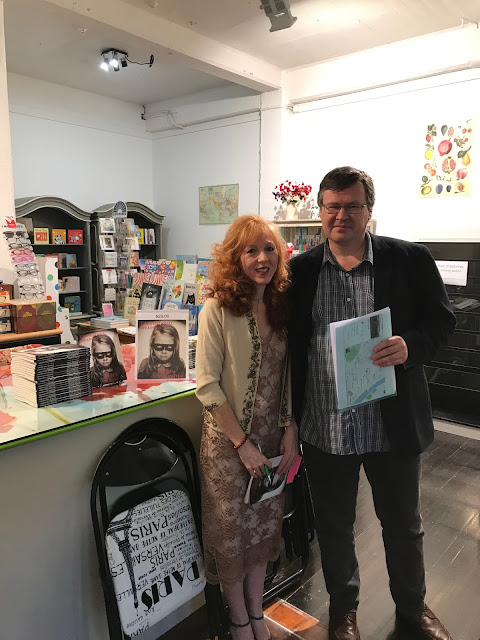 
So Bronwyn and I drove down last night, after my midday class, to attend Tracey's booklaunch in Hamilton. It was great! The crowd could hardly fit into the space - the refurbished Poppies Bookshop, one block back from Victoria Street - so they were gathering outside as well as in. The drink flowed free, and the catering was splendid. 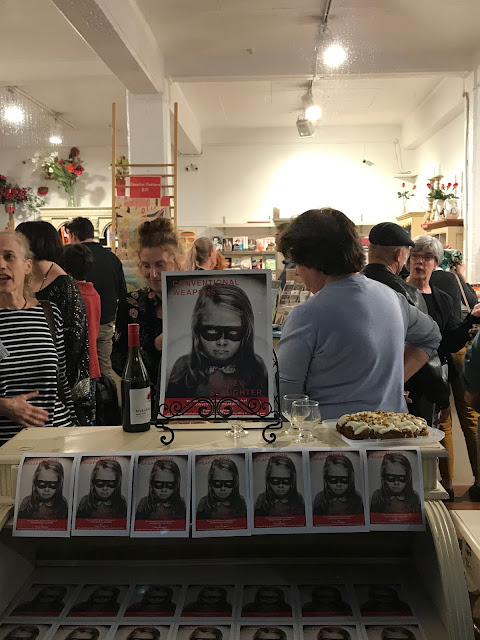 
Here's my launch speech for the book (which - of course - doesn't begin to do it justice, but one must at least try to fix an impression): 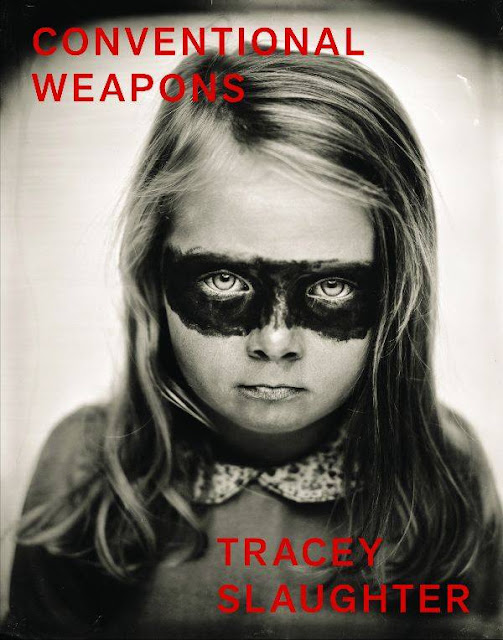 
I think that the thing I’d like to stress to begin with is that I first knew Tracey as a poet, long before I knew about her short stories. It was, in fact, her feature in Poetry NZ 25 (2002), which really woke me up to her as a writer. 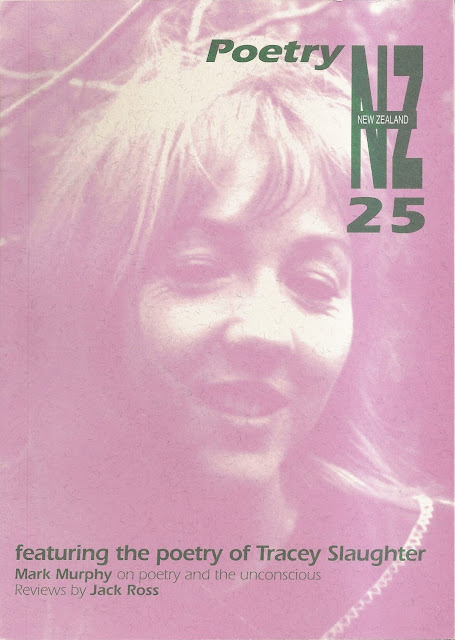 
Just reading the titles of those poems now is very evocative, I must say: “Lone Wolf goes to her Reunion”, “Anatomy of dancing with your Future Wife,” as well as the terrifying “Rules for Teachers (1915).”

Nor do you have to hunt out old issues of Poetry NZ to see them, either. These – and many more – were included in her first book, the wonderful – and revelatory – Her body rises: stories & poems (2005). 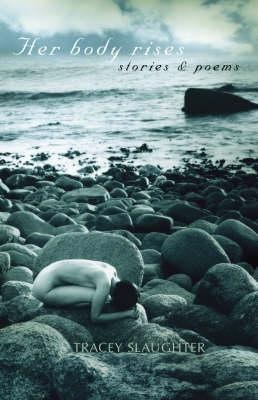 
Over the years I’ve been privileged to see a lot more of Tracey’s poems – as a friend, but particularly as an editor. She’s always been very generous to my requests for more material from her. One of the poems in the present book, Conventional Weapons, first appeared in my guest-issue of brief #50 (2014).

In fact, that whole issue was bookended by two long Tracey Slaughter poems, “31 reasons not to hear a heartbeat” at the beginning, and her fascinatingly disproportionate Victorian monologue “The Box of Phantoms” at the end. That one isn’t in this book, alas, but you can look it up in the issue. 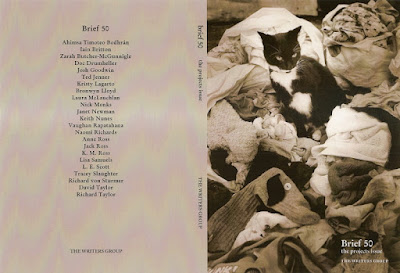 
So while it is technically true that this is Tracey’s first stand-alone poetry collection, it’s very misleading to see her as any kind of newcomer to the game. She’s been publishing poetry for more than two decades now, and it’s high time that we started to see her, like Raymond Carver, as someone equally adept at poetry and the short story.

But what kind of a poet is she? Words like ‘bodily,’ ‘visceral’, ‘grimy and dirty’ have frequently been used to characterise her work, and particularly these poems. There is a lot of sex in them. There’s also lot of desperation, pain, and sheer horror of the void. As Hera Lindsay Bird remarked on the dust jacket of another recent VUP book, Therese Lloyd’s The Facts, ‘it won’t make you feel better.’

But all that implies a kind of shock value: a quest for extremity for its own sake. But you have to read deeper and better than that if you want to begin to understand some of the many things Tracey is trying to do in these poems.

As always, she’s extremely, wonderfully literary. Mike Mathers’ Stuff article about this book states that: “If the collection had an overarching theme, it would be one of giving voice to a group of strong female characters of different ages.”

I mentioned before the long Victorian monologue in that old issue of brief magazine. In many ways this collection is a tip of the hat to Robert Browning’s Dramatis Personae (1864): to his idea of embodying complex and subtle character portraits in dramatic monologues – a precedent followed by his disciple Ezra Pound in Personae (1909).

It’s a mistake to think that poets are mostly concerned with self-revelation, leaving fiction writers to concern themselves with the delineation and analysis of character. Perhaps, in fact, it’s Robert’s wife Elizabeth Barrett Browning who’s the stronger influence here: particularly her wonderfully rich and complex verse novel Aurora Leigh (1856). 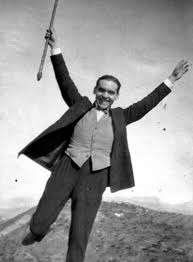 
Tracey understood long since that to be a good writer you also have to be an insightful reader, and I was particularly delighted to hear the echoes of Federico Garcia Lorca’s great ‘Lament for Ignacio Sanchez Mejias,’ with its repeated refrain of ‘a las cinco de la tarde’ [at five in the afternoon] in her own poem ‘breather’ (which came second in the 2018 International Peter Porter Poetry Prize).

It’s not that Tracey is imitating Lorca’s heart-broken lament for his doomed friend, the dead bullfighter, but she certainly seems to be channelling it somehow. The love trysts in cheap hotels which occur so often in this collection of poems have become a kind of underlying motif or background music, like Lorca’s Andalusian folk traditions and gypsy ballads.

The mention of music brings me to another major theme in Tracey’s work. She is herself an accomplished rock & roll drummer, and has performed for many years as the lead singer in a local covers band. In fact one of the original titles for this book was ‘Covers’ – which does tend to confirm that the complex relations between poetry and music are never very far away for her.

If Lorca, and all he represents, constitutes one pole of her inspiration, then, the sad, frail, whip-thin and radioactively talented Karen Carpenter might be said to embody the other. 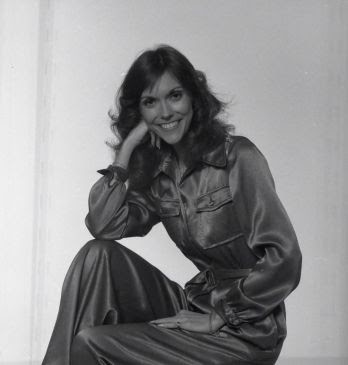 
Her long sequence ‘it was the seventies when me & Karen Carpenter hung out’, which covers almost twenty pages of the book, underlines this relationship in all its dangerous, flamboyant glamour. KC, or Kace, was a drummer like Tracey. Like Tracey she fought the pressure to come out from behind her drums. Unlike Tracey, she gave in.

A single review mentioning the word ‘plump’ was enough to set off the nightmarish anorexia which eventually took the star’s life – and it’s that aspect that Tracey’s narrator in the poem explores in all its painful detail. Painful, yes, but also funny with a kind of gallows humour:

the feet
of me & KC
glue our dreams
like trophies
to the cork-tile
kitchen. When we get
there the cupboards bulge
with Instants
bright in their toxic
brands. Our
tongues are caked
with calories, all for
our mothers’
convenience. You can
just get so lovesick
for puke. [53]

So, while I do continue to hear Lorca’s immortal elegy when I read Tracey Slaughter, I also hear Karen Carpenter’s late, great song ‘Calling Occupants of Interplanetary Craft’ – or rather, see the video for that song, with KC’s eyes bugging out of her face, and the jumpsuit emphasising every absent curve.

If life wasn’t like that – if young girls didn’t set out to starve themselves to death in the name of a false image of perfection; if desperate souls didn’t get themselves fucked in anonymous hotel rooms in random acts of adultery, then it might not be necessary to write about it.

Tracey has the courage to do so. More importantly, she also has the skill and the depth of poetic knowledge to write it in such a way that we have to go back to her poems again and again to tease out their corners, work out the angles, learn – each time – a little more about the sheer strangeness and beauty of human beings. Buy this book. You won’t regret it. 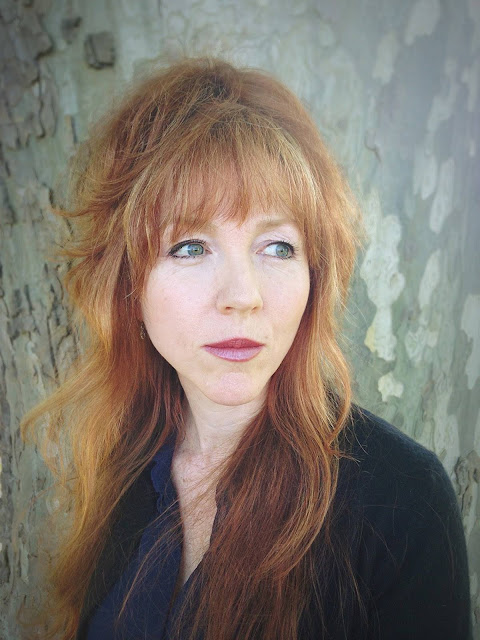 Hi Jack. I am your official commentator, so my apologies for my shortis absence.

Ted Jenner and I at Xmas were talking briefly of women writers. Tracey Slaughter's name came up as well as Paula Green and some others. I certainly liked that 'The Box of Phantoms'. I am keen to get more of her books. I recall that first PNZ she was in.

Dramatis Personae has some interesting poetry. Almost too difficult to fathom even with an annotated version I had. 'Caliban on Setebos' is one of my favourites. DP was one of the books I read through slowly in 2017.

I have several books of Lorca but haven't ever read much I liked by him except a play. But I have to concede I haven't read all the books I have. Tragic life of course. Jack Spicer (West Coast US Poet who, of course, drank himself to death) wrote 'letters' to him as sort of prose poems. I had heard of the Carpenters but forgot about them.

Clearly Slaughter's work is concentrated on the hard edges and passion, the body etc. And is well informed by other writers, music, culture etc. Not just theory only. Must get that book sometime.