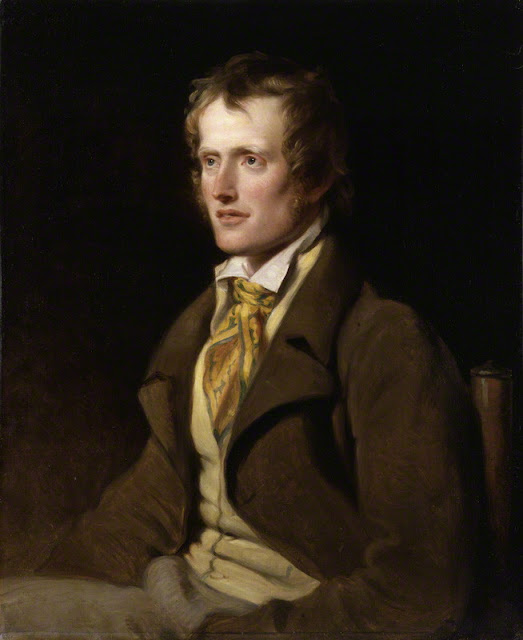 
It's not really that I'm trying to be particularly original or provocative in comparing these two poets (perish the thought). They belong to completely different phases of the Romantic era, for a start: John Clare, the peasant poet, born in poverty in 1793 - a contemporary of Keats and Byron; Charles Baudelaire, the original poète maudit, born in the stifling heart of the bourgeoisie in 1821, and dead of alcoholism and self-abuse at the age of 46. 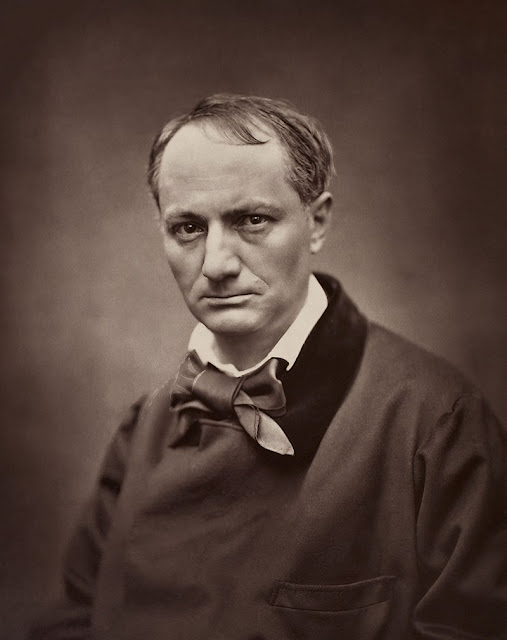 
Clare was (and remains) the patron saint of pastoral poets everywhere: a soul so pure he seemed to have come from another sphere, the pre-enclosure, peasant world of organic village life, free of the affectations of civilisation.

Baudelaire, by contrast, is the poet of drugs, sex, industrialism, city life, and the principal inspiration for the figure of the flâneur, the idle (but preternaturally observant) dandy - what the Russian critics called 'the superfluous man.' He was impecunious, self-destructive, vindictive, and relentlessly critical: of himself more than anything.

And yet, and yet. They didn't do anything quite as convenient as die in the same year, but they weren't far from it. John Clare died at 70 in 1864, Baudelaire three years later, in 1867. But then Clare spent the last 25 years of his life locked up in an asylum (from which he briefly escaped in 1841). Baudelaire, by contrast, suffered a massive stroke in 1866 and spent the last two years of his life in a succession of hospital wards.

In other words, neither of them could last in the world much beyond their mid-forties. The difference is, of course, that Clare experienced an extraordinary burst of creativity in his madhouse years - some poems written under his own name, others under that of Lord Byron, whom (some of the time) he believed himself to be.

So far so unconvincing. I agree that I haven't made a strong case, as yet, for considering them together. It's just that the other day I was reading The Wood is Sweet, a little selection of John Clare's poems made for children, and ran across one of his most famous poems, 'The Skylark': 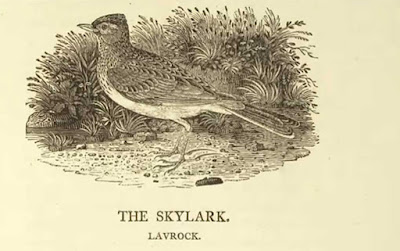 The rolls and harrows lie at rest beside
The battered road; and spreading far and wide
Above the russet clods, the corn is seen
Sprouting its spiry points of tender green,
Where squats the hare, to terrors wide awake,
Like some brown clod the harrows failed to break.
Opening their golden caskets to the sun,
The buttercups make schoolboys eager run,
To see who shall be first to pluck the prize —
Up from their hurry, see, the skylark flies,
And o'er her half-formed nest, with happy wings
Winnows the air, till in the cloud she sings,
Then hangs a dust-spot in the sunny skies,
And drops, and drops, till in her nest she lies,
Which they unheeded passed — not dreaming then
That birds which flew so high would drop agen
To nests upon the ground, which anything
May come at to destroy. Had they the wing
Like such a bird, themselves would be too proud,
And build on nothing but a passing cloud!
As free from danger as the heavens are free
From pain and toil, there would they build and be,
And sail about the world to scenes unheard
Of and unseen — Oh, were they but a bird!
So think they, while they listen to its song,
And smile and fancy and so pass along;
While its low nest, moist with the dews of morn,
Lies safely, with the leveret, in the corn.


This is a fairly typical Clare poem. He tends to write in standard metres - in this case heroic couplets, at other times ballad measure. His rhythms and versification tend to the traditional and unadventurous also: no sudden breaks in the iambic line, no startling rhymes (unlike his hero, Lord Byron).

So why do we love him so much? It's the detail of the lines, the sudden flashes of careful insight and genuine knowledge that one glimpses from time to time in his choice of phrases or adjectives that gives his verse its peculiar distinction.

On the one hand, it sounds a bit like a setpiece description by another of his models, James Thomson's The Seasons (1730), but the moment one goes below the surface, strange moments of vision start to appear:

Where squats the hare, to terrors wide awake,
Like some brown clod the harrows failed to break.

Clare, the 'whopstraw man,' a labourer whose job it was to harrow the harvested corn, is yet intensely aware of that 'squatting' hare - nor is it the beauty of the creature he chooses to emphasise, but its terror.

The schoolboys running to catch buttercups seem pretty conventional figures, too, until we realise that Clare is using them to construct the intense metaphor which governs the last half of his poem:

Had they the wing
Like such a bird, themselves would be too proud,
And build on nothing but a passing cloud!

They imagine themselves like the skylark, but see it solely in terms of the clouds its flight encompasses. They cannot imagine the truth that it, too, is ruled by fear and the constant threat of destruction of what it holds dearest: its nest.

So think they, while they listen to its song,
And smile and fancy and so pass along;
While its low nest, moist with the dews of morn,
Lies safely, with the leveret, in the corn.

Well, clearly the obvious comparison here is with Shelley's "Ode to a Skylark", whose first five or so lines virtually everyone who's ever read a poem in English can quote by heart: 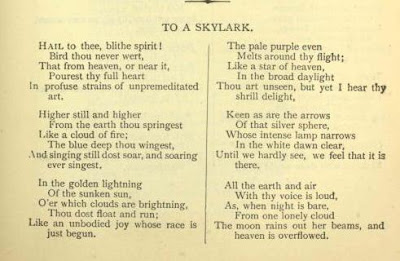 
The "schoolboy" comparison seems fairly apt, also. Shelley was 29 when he died, 27 when he published 'Ode to a Skylark.' Clare, in his mid-forties and at the heart of his powers, must have felt that he knew a good many things about birds which the younger poet had never had the chance - or possibly the desire - to learn. Even his strongest defenders would have to admit to a certain tendency towards abstraction in Shelley's verse. Clare's may be far less accomplished technically, but the precise and concrete was - in the end - all that interested him.

Let's take another tack on this poem of his, then. Here's Baudelaire's "The Albatross": : 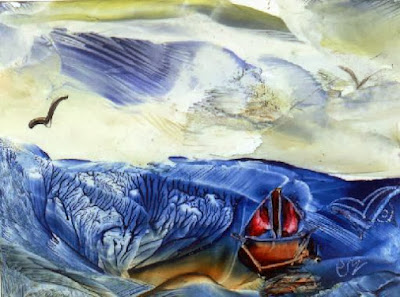 
If you click on this link, you can find a selection of English verse translations of this immortal poem by the likes of Roy Campbell, George Dillon, and various others. Rather than add to them, I thought it might be best to provide a simple prose crib. There's a reason why many regard Baudelaire as the greatest European poet since Dante, and it isn't because he dyed his hair green and contracted syphilis: it's the sheer beauty and ease of his writing. Many of the translations on the site are very skillful, but they're still not Baudelaire.

Often, to amuse themselves, the crewmen
catch albatrosses, vast sea birds
who follow, indolent travelling companions,
the ship as it glides across the bitter gulfs.

Hardly have they dumped them on the deck,
than these kings of the blue, clumsy and ashamed,
let their great white wings trail pitifully
beside them like oars.

This winged traveller, how weak and foolish he is!
He, lately so beautiful, how comic and ugly!
One teases his beak with the stub of a pipe,
another mimes, limping, this invalid who once flew!

The Poet resembles this prince of the clouds
who haunts the storm and laughs at archers;
exiled on earth in the midst of catcries,
His giants' wings impede him from walking.


Just as one can hear, faintly, at the back of Clare's poem, an echo of Percy Shelley's, similarly, here, one senses the presence of Coleridge's "Rime of the Ancient Mariner." Baudelaire was pretty well-read in English literature, a pioneering translator of Poe and De Quincey (among others), and he could hardly have been ignorant of the most famous albatross in poetic history:

'God save thee, ancient Mariner,
from the fiends that plague thee thus! —
Why look'st thou so?' - With my crossbow
I shot the albatross. 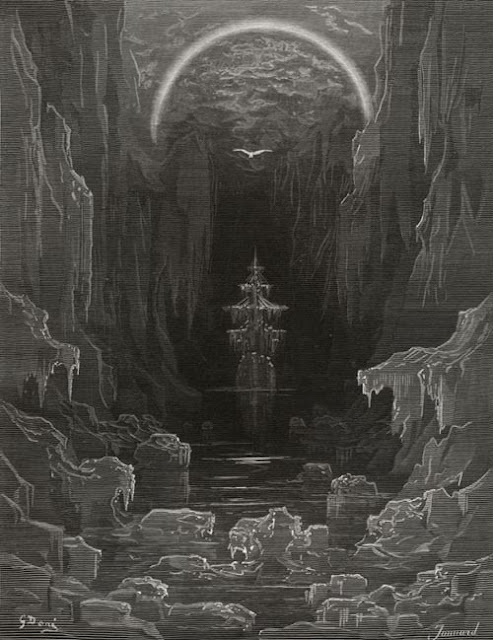 
That comment about how Baudelaire's ideal poet resembles the bird "qui hante la tempête et se rit de l'archer" [who haunts the tempest and laughs at the archer] is surely a reference to the crossbow-wielding mariner himself. But where exactly is Clare in this equation?

I guess it's in the reversal of expectations which dominates each poem. In Clare's case, the marauding schoolboys imagine that the skylark must nest in the clouds, since that's what they would do. Actually, though, it hides its nest as low down as it can, below eye level, in the corn with the rabbit and the other creeping creatures.

In Baudelaire's, the albatross is mocked because of its inability to master such simple, everyday arts as walking without stumbling across a deck. In fact it is because of its other great gifts, its giants' wings, that it cannot fit easily into a crowd, but the desire to simplify, to drag everything down to the level of the lowest common denominator is what leaves it so cruelly exposed.

Baudelaire's albatross was born to fly, and lacks the gifts for anything else. Clare's skylark is similarly gifted, but uses its flight to distract its enemies from what it most longs to protect. Both poets write out of an aching sense of loss and unbelonging. In Baudelaire's case this is expressed in loud outrage, in Clare's by the desire to hide and to escape.

If you want to understand John Clare, the first thing is to stop thinking of him as some simple, instinctive personality, lacking the art of his more self-conscious and educated contemporaries. His academy was every bit as rigorous as theirs, and his poetry - vast and uneven a bulk as there is of it - repays the same pains.

Similarly, reading Baudelaire for the cheap thrills of his iconoclasm and diablerie is mostly a waste of time. Those things are there, but it's the penetrating intensity of his intelligence and insight that gives his work its enduring power.

In both cases, paradoxically, it's sometimes best to approach these poets through their own prose. John Clare's "Journey out of Essex" - his heartbreaking account of his 1841 escape from the asylum to find his lost love, Mary Joyce (already dead for three years) - is fascinating enough. But his autobiographical and other prose notes on his life and the countryside he grew up in also have an indescribable charm of their own.

Baudelaire's prose is more multifaceted and complex, but his analyses of the paintings in successive salons show the concentrated critical intelligence which enabled him to revolutionise French - and, eventually, world - poetry. He was never really the idle druggie of legend, but rather a disciplined mind modelled on, but eventually surpassing, his hero, Edgar Allan Poe.

Both are poets not so much to read, as to reread. As soon as you've reached the end of each poem or journal entry, it's time to turn back to the beginning and start again. Only then does the peculiar light of their insight begin to communicate. These are not bodies of work one could ever exhaust.

I conclude, as usual, with a brief list of the books by each I've managed to accumulate in the last thirty-odd years of reading both: 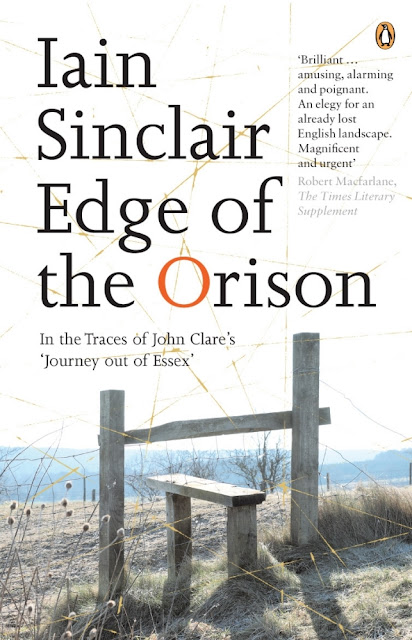 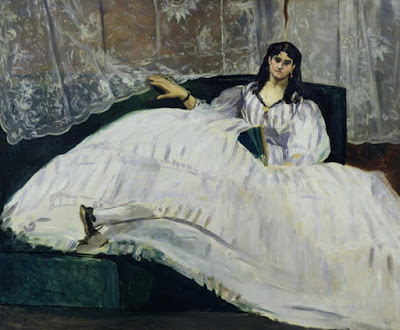 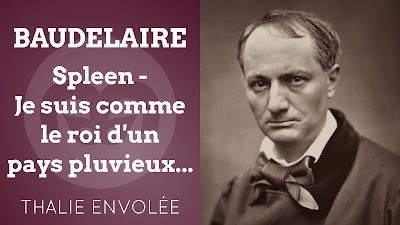