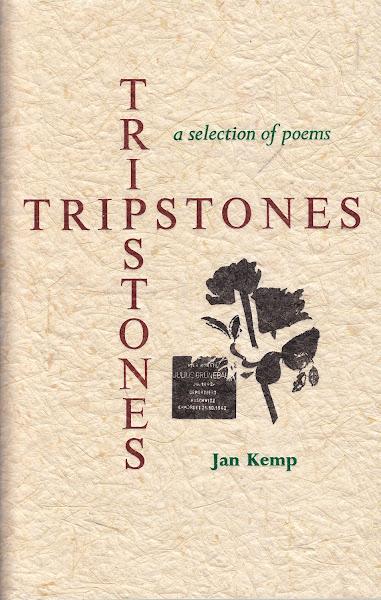 
Expatriate Kiwi poet Jan Kemp's latest collection, Tripstones, is a beautiful piece of bookmaking as well as making an important statement about her poetic identity. 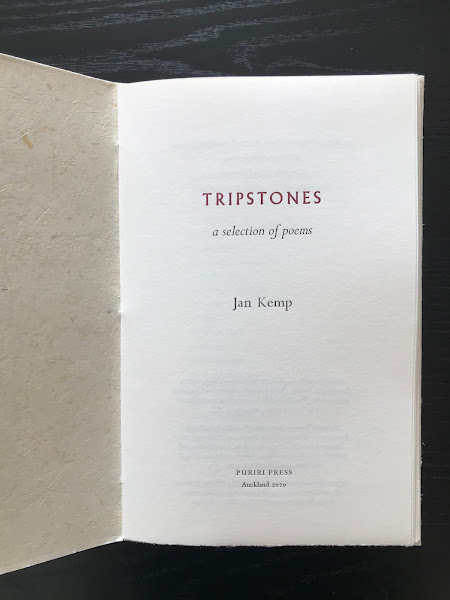 The central image here is the Stolperstein, the stumbling block, the stone that trips you up when you least expect it. 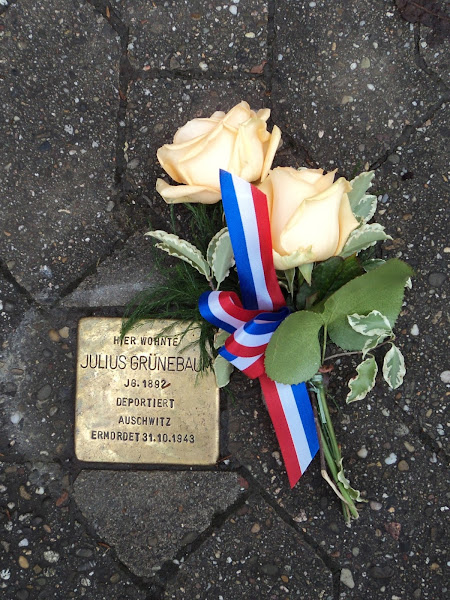 
Here's Jan's own picture of the Stolperstein she discovered in her own (new) hometown, Kronberg im Taunus. As she herself explains in the note at the back of the book:

A Stolperstein is a small square burnished brass plaque about 12cm x 12 cm set flush with the walkway paving in many German towns, villages and cities - gold against grey - so that you might notice one shining underfoot. You 'stumble' upon it, and then perhaps look down and read the inscription engraved on it, the name of a murdered victim of the Holocaust who lived in a nearby building.

The poems, too, drawn from the last thirty years of her writing life, from The Other Hemisphere (1991) to Black Ice & the Love Planet (2020), seem to be those she wishes us to be stopped by, to stumble over, not to be able to move on from too rapidly.

They range widely in theme and content, mind you. From the evocative local imagery of "Swimming" (which you can hear the author reading here), dated from Waiake Beach, Torbay, 2004 - just a few miles down the road from where I live: 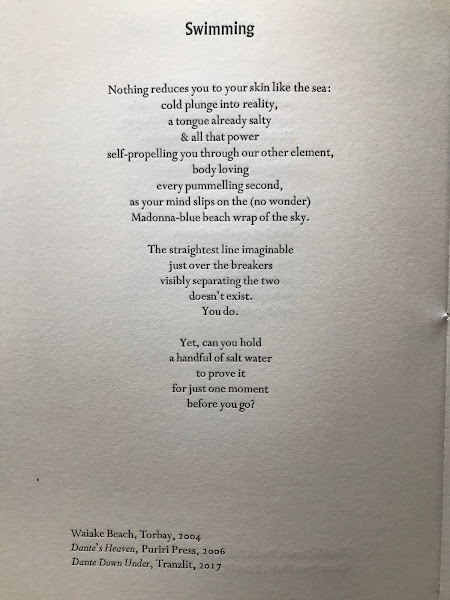 
Nothing reduces you to your skin like the sea:
cold plunge into reality,
a tongue already salty
& all that power
self-propelling you through our other element,
body loving
every pummelling second,
as your mind slips on the (no wonder)
Madonna-blue beach wrap of the sky. 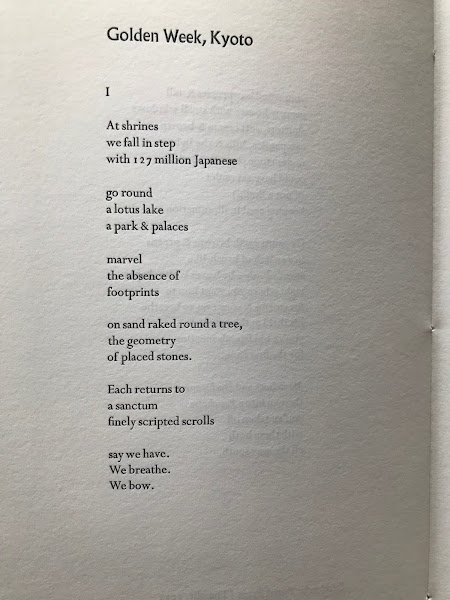 
To the Alice in Wonderland-like restrictions of 'Golden Week' in Kyoto:

Giants in yukatas,
a 4-tatami-mat room,
we bend far to unroll beds 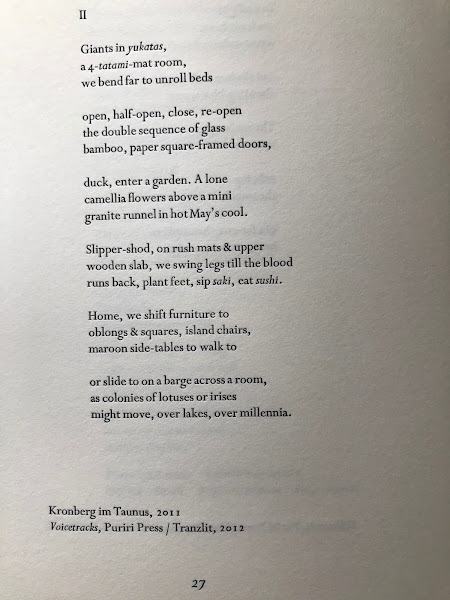 To her new Heimat in Germany ('The Kiwi in me' - joint English / German reading available here):

I've swapped Tane Mahuta
for two mighty Eiben,
the woods for the sea -

tui, tuatara for
Rotkehlchen, Eidechse,
but the Kiwi stays me. 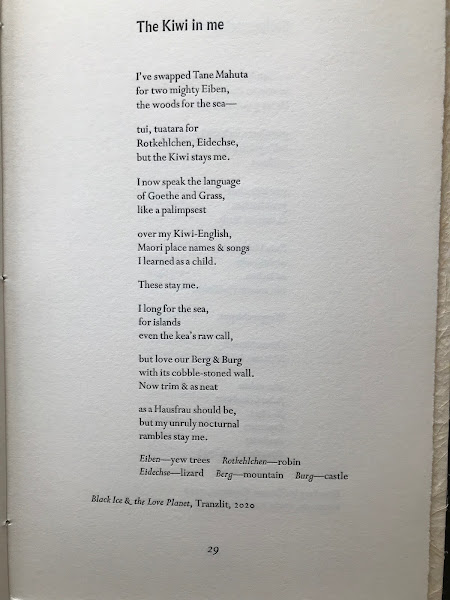 Increasingly the new poems need glossaries, peppered as they are with German terms. Did you know a Rotkehlchen was a robin redbreast and an Eidechse a lizard? I knew that Eiben were yew trees, but the linguistic realm inhabited by her more recent work does seem to presuppose a reader equally familiar with the particularities of New Zealand and German discourse.

Clearly this isn't an accidental choice. When you go international, you can go bland and unitone: an idiom suited for the airport bookshop; or, alternatively, you can cherish the peculiarities of your own idiolect.

Characteristically, this is the choice that Jan has made, something which fits with her life-long fascination with the spoken word, the sound of a particular poet reading a particular poem at one precise time - the reason she worked so hard for so many years on the Waiata (1974) and Aotearoa New Zealand (2002-2004) Poetry Sound Archives, as well as on our three published anthologies of work from those collections (2006-2008).

After all, as the first of the poems I quote from above concludes:

The straightest line imaginable
just over the breakers
visibly separating the two
doesn't exist.
You do.

Yet, can you hold
a handful of salt water
to prove it
for just one moment
before you go?

The straight line, the centrist discourse, doesn't exist - except in the abstractions we're invited so vociferously to inhabit and believe in - but, unprovably yet demonstrably, 'you do'.

This is a lovely and thought-provoking collection from a poet who's been making a contribution to our literature for almost half a century. Judging from the poems here, she's still going strong! 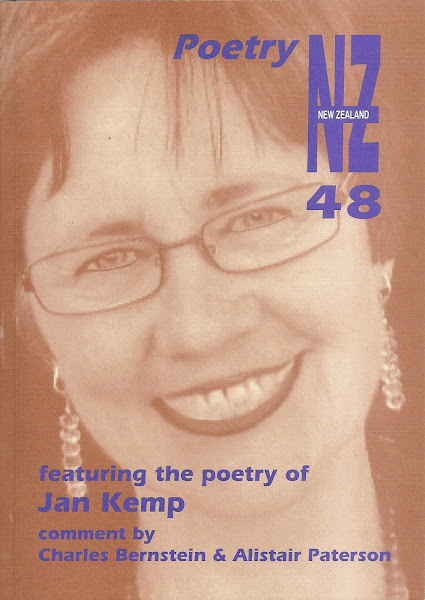 The book has been published by John Denny of Puriri Press in a limited edition of 50 copies. Most of these have already been sold or distributed to friends, but there are still a very few copies for sale. John Denny adds that:

People wanting a copy should contact me first to make sure there are some still available (puriripress@gmail.com), in which case I'll confirm and send them an invoice. The price is $NZ50 plus $5.90 pack & post.

As you can see from the sample pages included in this post, it's a lovely piece of printing: on sumptuous paper, with a handprinted cover, and all the things we collectors cherish so much in a small-press book.

[NB: As of Sunday, 25th October, this edition is officially
SOLD OUT
so from now on you'll have to consult it in a public collection near you!] 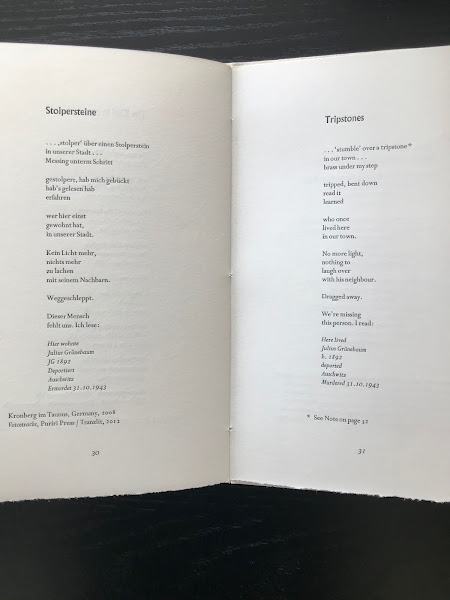 I possess a book 'Diamonds and Gravel' by Jan Kemp. I certainly would have bought 'Tripstones'. Why didn't Denny print more of them? He still can, surely. Perhaps not, I know very little about publishing or printing books.

Oh well, such is life: missed this post, but maybe it would have been too late.

If she lives in various parts of the world it adds to her art, the range and the stimulus.

A good post. Your examples and images of her book and of the Tripstones are great.

It was informative also, I had never heard of them: strange the ways of life and the world.

Hi Richard, thanks so much! 🙏 If you contact Jack, I'm sure he'd give you my email address. We've had some facsimile copies of Tripstones printed here in Germany - perhaps you'd like to purchase one? If yes, I can post it to you.

Hi Jan. Yes, I will contact Jack. I have been out of action a bit but am 'repaired'. A long time since this was here. I recall when I went to University of Auckland seeing a large poem of yours up in the Library,
My own poetry really only started when I was about 40 in 1988. But years before that I had a prose poem thing that the editors of Mate wanted to publish as a story. Then I drifted away into protest politics.
But in the 90s I met Hone Tuwhare. (I saw you toured with him once). I mentioned I had worked at the Railway Workshops in 1969, he said "I did too, in 1939." We talked about writing things on the railway wagons. He said: "I wrote on them, I was writing a poem one day when someone said to me,'Who do you think you are, Shakespeare?' He said: 'Who'se Shakespeare?'! He didn't know, in fact. We laughed about that.

Yes, I'll get a contact from Jack, who should see this I think. All the best, the book looks interesting. I'm going (inter alia) through my own books (of various kinds). I have a friend who originally learnt and studied Chinese for a degree, and now, I suppose he is about 60, he reads poetry at Poetry Live, Peter Le Baige. He also learnt German and I think modern Greek. So he could get better into German poetry.
I am a bit like Jack, a collector, although less intense but still with a lot of books and I like reading various poetry writers. So I will contact you. RT