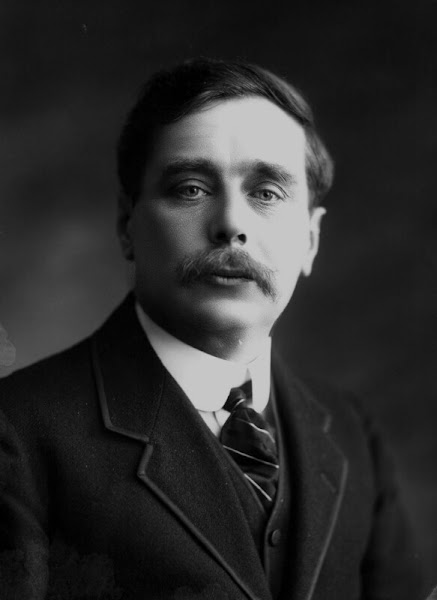 "I beg your pardon, sir," he said in his rather thin cockney voice, "is this your book?"
"It doesn't matter at all," said Wimsey gracefully, "I know it by heart. I only brought it along with me because it's handy for reading a few pages when you're stuck in a place like this for the night. You can always take it up and find something entertaining."
"This chap Wells," pursued the red-haired man, "he's what you'd call a very clever writer, isn't he? It's wonderful how he makes it all so real, and yet some of the things he says, you wouldn't hardly think they could really be possible. ... 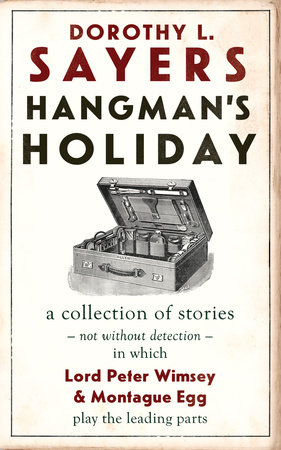 So begins the first story, "The Image in the Mirror", in Dorothy Sayer's detective story collection Hangman's Holiday. Lord Peter Wimsey's interlocutor goes on to discuss with him the implications of H. G. Wells's "The Plattner Story", an account of a schoolmaster who gets blown into the fourth dimension and comes back reversed: his left turned to right, his right to left. 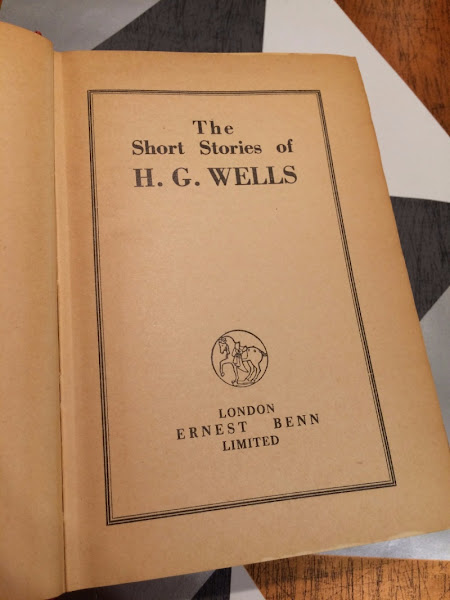 It's pretty clear that the book they're discussing is the then fairly recently published omnibus edition of The Short Stories of H. G. Wells. What I find most interesting about their conversation, though, is Wimsey's throwaway line about knowing it "by heart".

There was a time when this was my favourite book in the world, and I too knew it virtually by heart. In fact, I had a kind of ritual which involved trying to read the whole thing - all 1100-odd pages - in one day, but it's not an experiment I would really recommend. 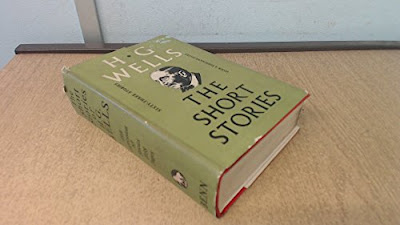 By then the stories were so familiar to me that I could practically recite them, racing from The Time Machine:

The Time Traveller (for so it will be convenient to speak of him) was expounding a recondite matter to us.

... all the way through to "A Dream of Armageddon", with its wonderfully poetic last lines:

"Nightmares," he cried; "nightmares indeed! My God! Great birds that fought and tore." 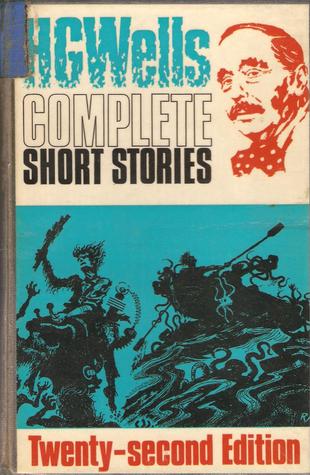 Although it was subsequently reprinted under the title The Complete Short Stories, the collection is by no means that - Wells, after all, had another two decades to live when it first appeared.

The 62 stories (and one essay) are divided into five sections, four of which reprint earlier stand-alone collections of Wells's: The opening section, The Time Machine and Other Stories, never published separately in book form, contains some of his strongest stories, published piecemeal throughout the 1890s. There are also another five separate stories grouped between sections 4 and 5 (for fuller details, see my breakdown of the contents in the Bibliography below). 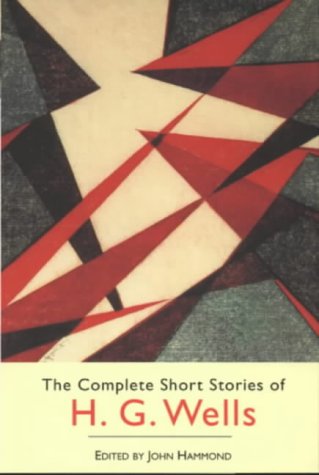 There is, however, another collection entitled The Complete Short Stories. This one was edited by John Hammmond in 1998. As well as all of the stories included in the 1927 collection - with the exception of the short novel The Time Machine - it includes another 22, most of them previously published in Hammond's 1984 collection The Man With a Nose and Other Uncollected Stories of H. G. Wells.

No doubt further stories will continue to surface from time to time (for more information, see the "H. G. Wells Bibliography" page on Wikipedia), but for all intents and purposes, these 84 stories might as well be thought of as the established canon.

As Dave, one of the commentators on this book on Goodreads, informs us: 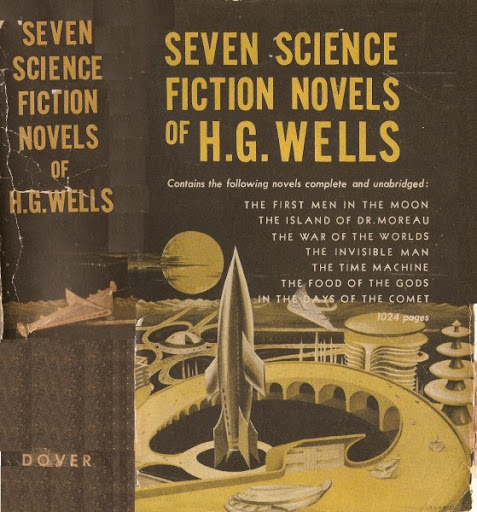 Those seven novels were very well chosen. They consist of: It's hard to imagine a more influential set of titles. Between them they introduced virtually every standard trope of the SF genre as it would develop over the next hundred years: space travel, time travel, alien invasion, utopian futures, genetic manipulation ... pretty much everything except robots (which would be added to the mix by Czech writer Karel Čapek's play R.U.R in 1920). 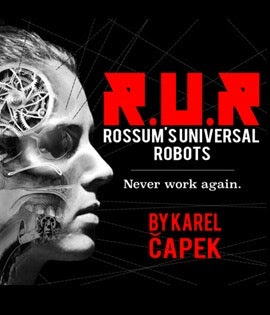 The dazzling talent of the young Wells seemed destined to sweep everything before it. As C. S. Lewis once quipped, however, as time went on he increasingly "traded his birthright for a pot of message" (if you don't get the pun, it's probably because you weren't brought up on the Authorised Version of the Bible. In the Book of Genesis, Esau trades his birthright to Jacob "for a mess of pottage"). Har-de-har-har. Maybe you had to be there ...

His later work does seem to lack the zest of those remarkable works of his first decade as a writer, but he remains one of the great sages and pathfinders for all subsequent work in the field of Speculative Fiction. The fact that he moved so easily from social satire to straight science fiction to the fantastic and supernatural (something very few of his successors succeeded in doing) meant that he avoided being typecast as a 'genre' writer. Though the sheer clarity and power of his prose also had a lot to do with that.

In 1930 Odhams Press published a 12-volume edition of his selected fiction which covered most of his major work in that form: 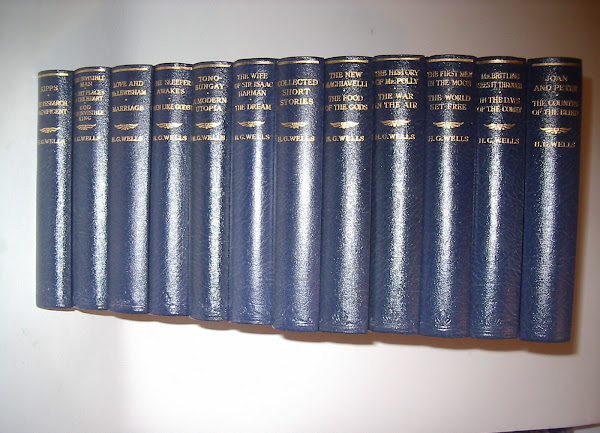 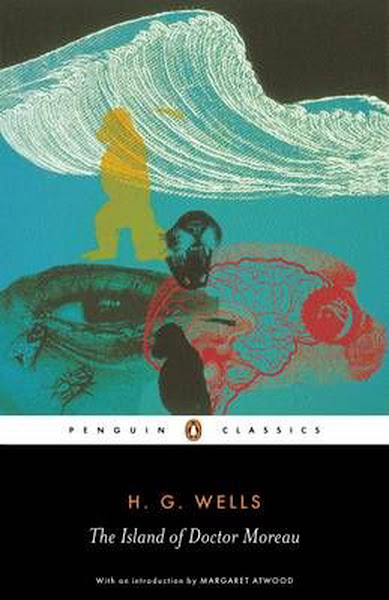 I suppose, if I had to choose myself from this gallery of masterpieces, the one I would go for would be The Island of Doctor Moreau. It's been filmed - badly - on more than one occasion (most recently with Val Kilmer and Marlon Brando in the principal roles), but the book itself has a haunting, nightmarish quality which completely entranced me when I first read it as a teenager. 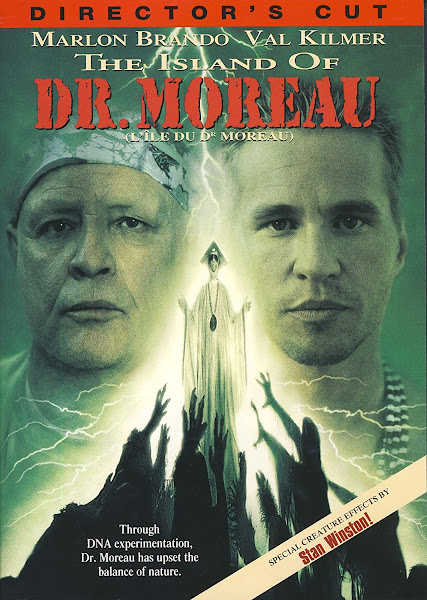 The figure of the mad scientist, tampering with God's work without fear or scruple, who consequently gets his comeuppance, comes to us straight from Frankenstein, of course. But the colonial setting transfers it into the morally compromised world of the early Conrad: Almayer's Folly (1895), say, or An Outcast of the Islands (1896). 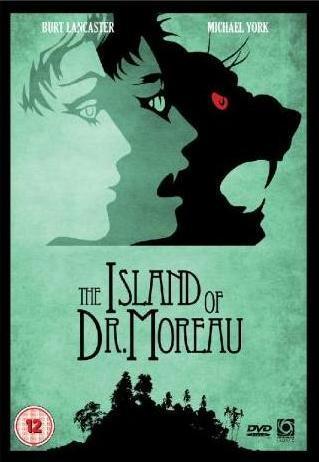 There are many themes jostling for dominance in this strange early story of Wells's: colonialism and colonial exploitation principal - in my view, at least - among them. One could almost see it as a counterblast to Kipling's Jungle Books (1894-1895). The strange parodic chants the half-animals live by certainly recall some of the stories and songs of Mowgli and his various brethren. 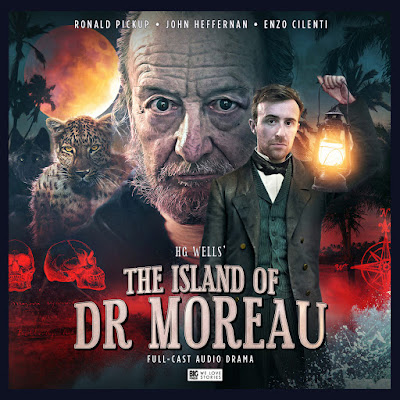 The colonial theme continues to recur in Wells's later fiction: in The First Men in the Moon (1901) and - perhaps most explicitly - Tono-Bungay (1909). I suppose the thing which makes Wells's early fiction so durable, in fact, is its refusal to simplify or avoid difficult questions of exploitation and brutality.

Later, of course, when he became a sage, he seems to have felt a responsibility to the 'left' in general which put him in strange company: co-authoring a book with Josef Stalin is not something most of us would want on our CV. Expediency and responsibility choked the initial outrage he felt - as a writer - at injustice and cruelty, just as personal prosperity gradually robbed his social satire of its edge.

The important thing about H. G. Wells, though, is not so much that he went off the rails a bit in his later years, as the extraordinary heights he had to fall from. I would argue strongly that the best place to start is by reading the original edition of The Stories of H. G. Wells, in any of its innumerable reprints. After that, the Seven Science Fiction Novels of 1934 will supply most of the rest of his truly durable work. 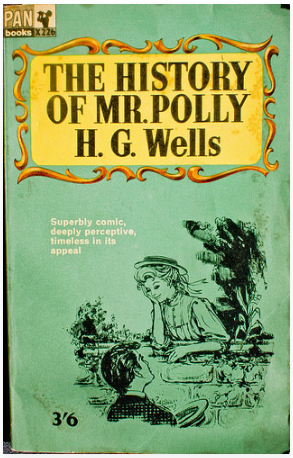 Mind you, this leaves out a number of excellent contemporary novels - Kipps and The History of Mr Polly, for instance. The Sleeper Awakes and The War in the Air should probably have been included among the best of his early Science Fiction novels, too. 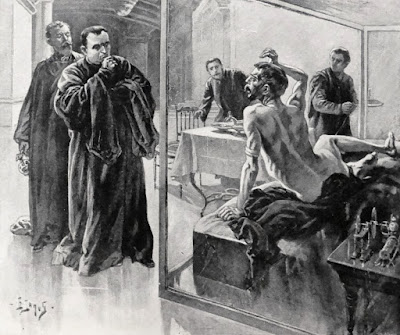 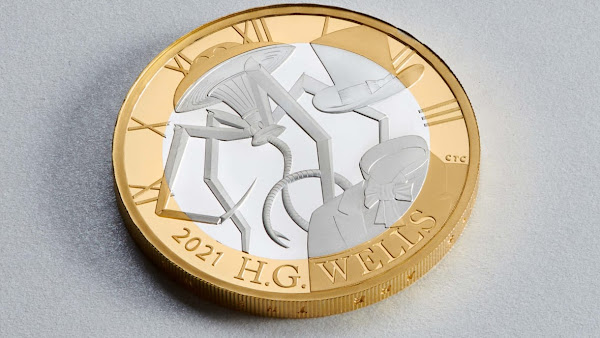 The recent news that the Royal Mint has just issued a special coin commemorating 75 years since H. G. Wells's death certainly confirms his continuing importance in British (and world) culture. On the other hand, certain errors on the coin - documented at length by various critics - show how little accurate knowledge of his work people actually have:

As the name suggests, the tripod only had three legs in Wells' novel. "How many people did this have to go through? Did they know how to count? Do they know what the "tri" prefix means??" artist Holly Humphries asked on Twitter. 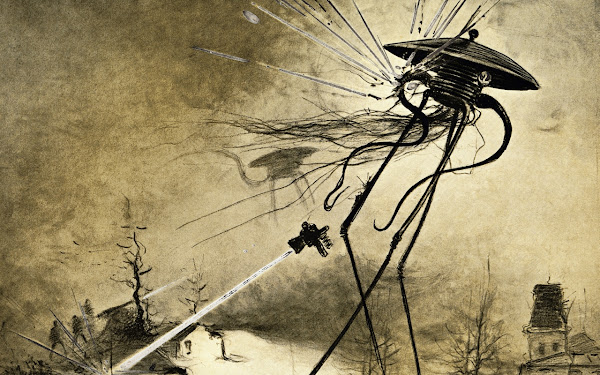 Not only this, but the portrait of the 'invisible man' on the coin has also drawn criticism:

Fans were also disappointed by the appearance of a top hat, supposedly in homage to Wells' book "The Invisible Man." The scientist Griffin, the titular Invisible Man, "was no gentleman, and did not wear a top hat," [Adam Roberts, vice-president of the H.G. Wells Society,] said.
"I suspect the designer has been influenced consciously or otherwise by DC Comics' 'Gentleman Ghost' - but he had nothing to do with Wells." 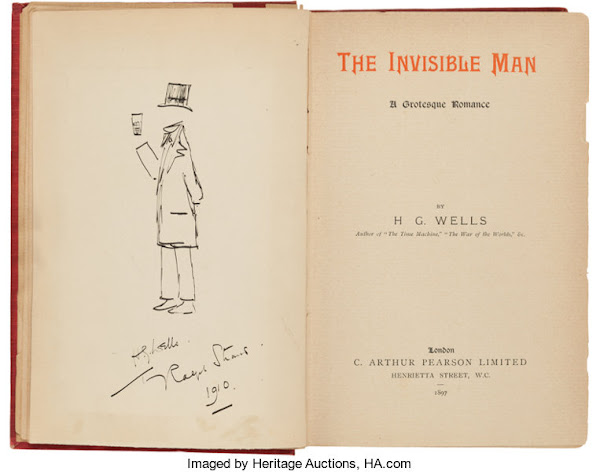 Here, however, I would have to take issue with the critics, whose knowledge of Victorian mores may not be quite so profound as they think. The original drawing above, by Wells himself, in a presentation copy of the book's first edition, clearly shows the invisible man in a top hat.

To complete the hat-trick, another flaw was spotted by Roberts, who said:

"The legend written around the rim of the coin, 'GOOD BOOKS ARE THE WAREHOUSES OF IDEAS', is (though it's sometimes attributed to Wells by various internet quote-sites) not an actual quotation by Wells."

Chris Costello, the coin's designer, remains defiant, insisting that "he was intentionally reinterpreting imagery from Wells' works for a modern audience."

"The characters in 'War of the Worlds' have been depicted many times, and I wanted to create something original and contemporary," he said.
"My design takes inspiration from a variety of machines featured in the book - including tripods and the handling machines which have five jointed legs and multiple appendages. The final design combines multiple stories into one stylized and unified composition that is emblematic of all of H.G. Well's (sic) work and fits the unique canvas of a coin."

I'll certainly grant that the choice of a four-legged tripod is "original" (though possibly somewhat misguided), and I don't think any responsibility can be laid at Costello's door for the probably spurious quotation, so I suppose the whole affair remains more a cause for celebration than carping criticism. I do wish, though, that artists would make a point of always - not just sometimes - reading the books they've been asked to illustrate. 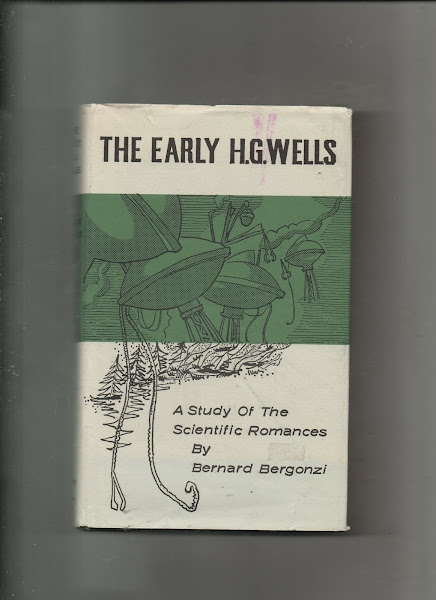 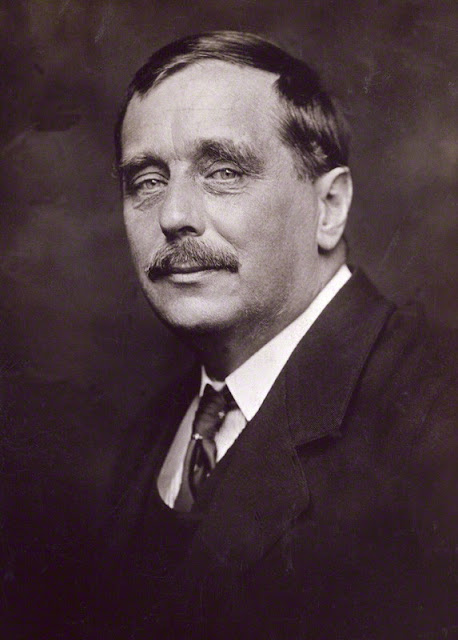 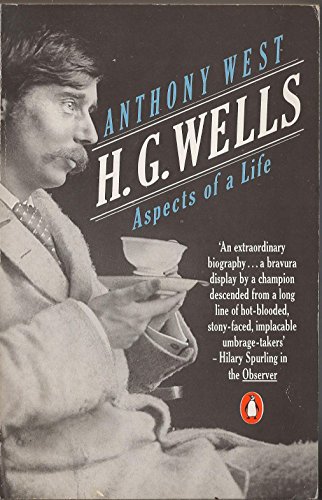