I guess it must be pretty obvious to anyone who's ever looked at this blog just how much I've been influenced by the life and works of the late Wystan Hugh Auden. I tried to explain the obsession here, but it's quite a tall order to sum up so long a course of reading and thinking in one short post.

I first encountered his poetry at school, in the mid-1970s. I can remember the moment, in fact. I was standing in the school store-room, waiting my turn to be 'seen' by one of the teachers (I think there was some lesson in how to ace a job interview going on, but I could be wrong about that). 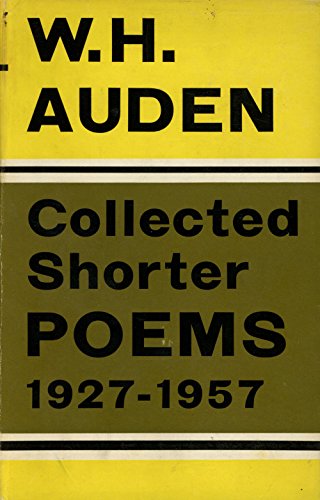 I noticed a book with an exceptionally garish cover lying on the table, and picked it up to see what it was. I was already a great fan of the poetry of A. E. Housman, so the first poem I picked from the table of contents was, I think, Auden's sonnet about him: 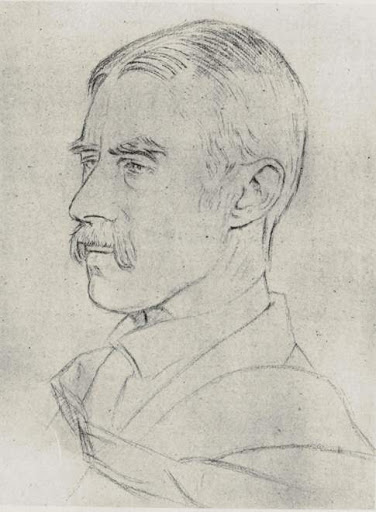 No one, not even Cambridge, was to blame
(Blame if you like the human situation):
Heart-injured in North London, he became
The Latin Scholar of his generation.

Deliberately he chose the dry-as-dust,
Kept tears like dirty postcards in a drawer;
Food was his public love, his private lust
Something to do with violence and the poor.

In savage foot-notes on unjust editions
He timidly attacked the life he led,
And put the money of his feelings on

The uncritical relations of the dead,
Where only geographical divisions
Parted the coarse hanged soldier from the don.


It enraged me! How dare he speak so flippantly of so wonderful a writer! 'His private lust' indeed! How could he know? I went around fulminating about the cheek of 'modern' poets who dared to criticise their elders and betters for weeks afterward.

It enraged me - but also fascinated me. I'd had a chance to look at some of the other poems in the book and, while I didn't understand everything I was reading (still don't, for that matter), I understood enough for them to stay with me, keep nagging at me, get under my skin against my will. 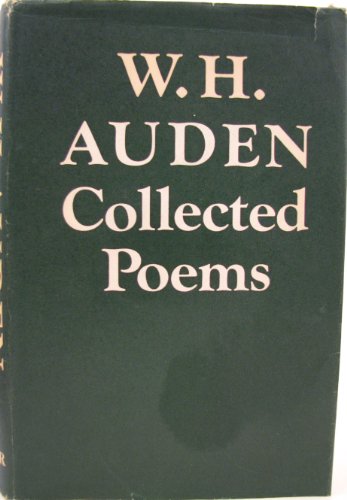 My Christmas present that year (1977) was Auden's newly published Collected Poems. By then I'd got to the stage of writing a sign for my door which read:


W. H. Auden rules!
And Edward Mendelson is his prophet ...

Mendelson's editing seemed amazingly accomplished and abstruse to me at the time, especially given the maze of competing readings and revisions he had to deal with as the poet's literary executor. Auden (like Wordsworth - or, for that matter, Yeats) was one of those poets who could never leave well enough alone. 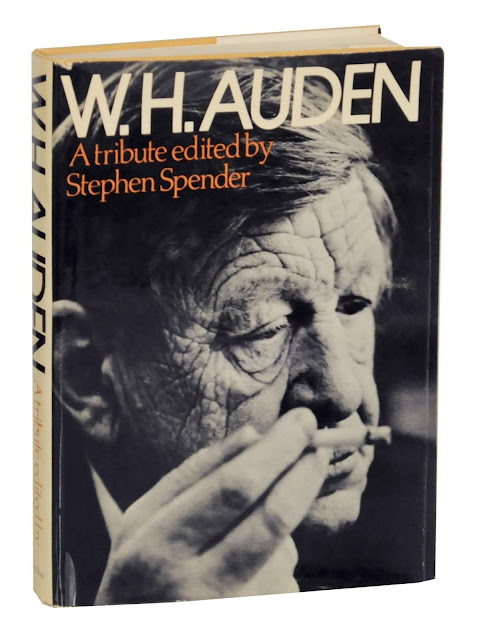 A great deal of my interest came from the book above, however. The fascinating essays and reminiscences it contained seemed to open up a whole cornucopia of thirties imagery and lifestyles. There was a photo-montage of Night Mail (the film, and the poem Auden wrote for it), pieces by Christopher Isherwood, Stephen Spender, a host of other old friends - virtually everyone who was anyone, in fact, except for those who'd predeceased him.

And so the obsession began to spread, gradually encompassing all the other writers whose lives he'd touched, or in whose books he'd somehow been recorded. I've written elsewhere on this blog about Isherwood, who would have to rank first in that pantheon, but there were many others as well: basically all the members of the so-called Auden Group: 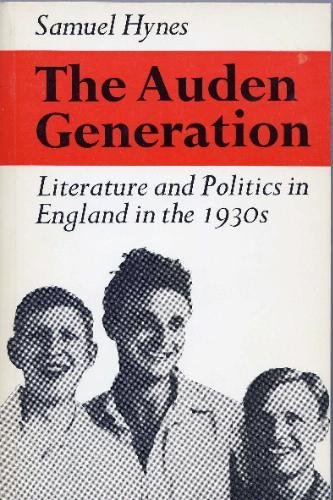 Hence, some 45 years after "first looking into Auden's Poems", this projected series of posts about those who have ended up - fairly or unfairly - in Auden's shadow. Auden could be a dominant, some would say a domineering figure. What of those other writers and poets? What might one say about them?

There are a great many to choose from. For a start, there are the other three components of 'Macspaunday' (a derogatory epithet coined by pro-Fascist writer Roy Campbell for this set of largely left-wing poets): Louis MacNeice, Stephen Spender, W. H. Auden, and Cecil Day-Lewis = Mac / sp /aun / day - get it?

Then there are those notorious lines from Day-Lewis's long poem The Magnetic Mountain (1933), much mocked and denigrated at the time by George Orwell (who referred to Auden as 'a kind of gutless Kipling'):

Then I'll hit the trail for that promising land;
May catch up with Wystan and Rex my friend ...

And then there are the editors and anthologists who promoted - some would say pushed - this literary movement at the time: Michael Roberts, whose two anthologies New Signatures (1932) and New Country (1933) constituted the first real attempt to define it; and Geoffrey Grigson, whose magazine New Verse (1933-39) existed - as he himself said - primarily to promote and print the work of Auden and his friends. 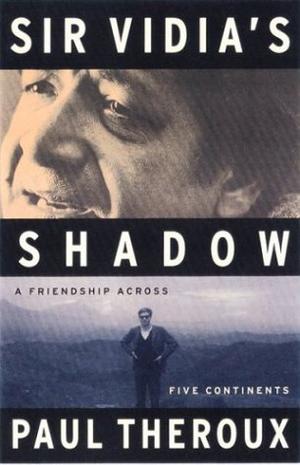 This, then, is my list of writers left unfairly - at least arguably - in Auden's shadow (I must confess to having found some inspiration for my title in Paul Theroux's memoir of his long and difficult friendship with West Indian writer V. S. Naipaul):


I'll put up the blogposts as I finish them, in no particular order, to avoid any invidious implications of primacy or degrees of importance. The list above, however, is arranged chronologically in order of date of birth. It's important, at times, to remember that Day-Lewis was three years Auden's senior, and Spender two years his junior.

Such details generally matter little for people you encounter as an adult, but the Auden group met first at school (Isherwood and Edward Upward), then at university (Spender, MacNeice and Day-Lewis), and a certain in-built competitiveness was the inevitable result.

There are plenty of other people I could have included: Charles Madge, of Mass-Observation fame, who did after all run off with Stephen Spender's first wife, and whose unfortunate account of first reading Auden (from his 'Letter to the Intelligentsia') remains extant to haunt him:

But there waited for me in the summer morning
Auden fiercely. I read, shuddered and knew.
And all the world's stationary things
In silence moved to take up new positions

Edward Upward the surrealist, too, was closely involved with the group. And if you count in their enemies: George Orwell, C. S. Lewis, Dylan Thomas, George Barker, the list could grow to include virtually everyone prominent in the arts in the 1930s ...

Let's begin with the six authors above, then. I think there are important things to be said about each of them - or if not, it isn't from lack of effort on my part in collecting their various works. 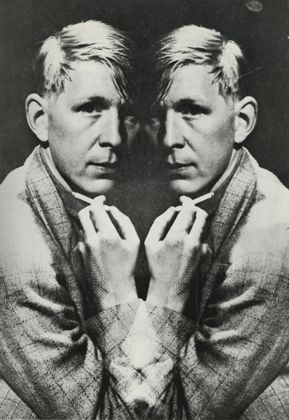 Edward Upward was a Marxist for longer than he was a surrealist.
I don't think you can call Orwell an enemy of Auden - he admired and quoted him, as well as deriding some of the poems that Auden himself suppressed when his enthusiasm wore off.
The other absence is Philip Larkin: in Larkin's Collected Poems his first influence - even before Yeats - is Auden. According to Michael Meyer, Larkin's hatred for Keyes - which lasted longer after his death than Keyes lived - derived from Keyes decision to exclude Larkin's Audenesque poems from the anthology Eight Oxford Poets. Larkin's view of the American Auden was much more hostile than his view of the the pre-war poet.

Yes, that's certainly true about Upward - unfortunately. I have read that trilogy of his, The Spiral Ascent, about being a Marxist in the 30s. It's the Mortmere stories that seem most durable, though.

Orwell and Auden had a vexed relationship. He was soundly abused by Orwell in The Road to Wigan Pier and then again in Homage to Catalonia ('I am not one of your fashionable pansies like Auden and Spender'), but then later on Orwell became friends with Spender and I think began to realise that Auden was far more complex than he'd given him credit for. They were never friends, though.

Yes, I thought about including Larkin, given that huge initial Auden-influence, but it would be hard to contend that he remained in any way 'in Auden's shadow' - just as Auden climbed out from under his various youthful influences, Housman, Hardy, Eliot, Larkin managed to shake off first Yeats, then Auden, to become the quintessential 'Movement' poet.

I've always had a bit of a soft spot for Sidney Keyes. His poetry hasn't really stood the test of time, but I enjoyed it very much when I was a teenager, and he still seems an interesting figure to me. Larkin, of course, as you say, loathed him.