I recently bought a copy of Ernst Jünger's Storm of Steel [In Stahlgewittern] (1920), one of those great classic First World War memoirs I'd heard of but never read. The translator, poet Michael Hofmann, after making a number of cracks about the howlers in the only previous English translation (by Basil Creighton - in 1929), claims that "unlike any of the other World War I books I've read, Storm of Steel has found its way into natural epic form" (p.xviii).

He also discusses the book's immensely protracted genesis: how it evolved from the original, heavily diaristic version published in 1920, through the "Nationalist" text of 1924 (the one translated by Creighton), then the more toned-down, nuanced narrative of 1934 (the only one available to the Nazis, who revered Jünger, though he did not return the favour), until its final substantive rewriting for the first edition of his Collected Works in 1961. 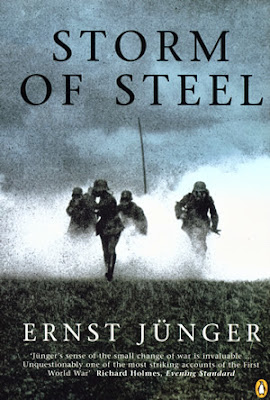 Hofmann sees this multiplicity of texts as a distinct advantage:


The inspiration of most of the English [war memoirs] is lyrical or dramatic; they work with one-off contrasts and ironies; they fear repetition or excess of detail. They begin as they mean to go on, with misfortunes and reverses: [Robert] Graves shelled by his own artillery; [Edmund] Blunden's grenade instructor blowing himself up with a bad grenade; [Siegfried] Sassoon breaking a leg while riding before he ever gets to France. There is something bleakly - bracingly - comic about all three. … Storm of Steel leaves all that behind.

Certainly Hofmann is correct when he says that "there is nothing comic about Jünger whatsoever." Let's take that famous episode of the "Christmas truce," for example. Perhaps the most famous description of this is in Robert Graves's short story "Christmas Truce" (first published in the Saturday Evening Post in 1962, and subsequently included in his Collected Short Stories (1965): 99-115). 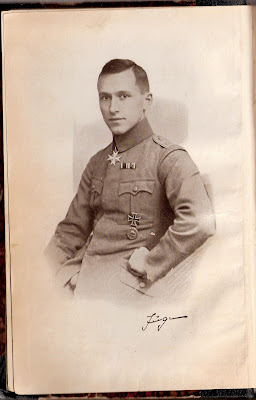 First, here's Jünger's account of Christmas 1915, from his chapter "Daily Life in the Trenches":

As Christmas approached, the weather seemed to worsen; we had recourse to pumps in our efforts to do something about the water. ["had recourse to" sounds like rather clumsy English to me: "were forced to use" would be my suggestion for something a bit more idiomatic. I wouldn't stress such a point if it weren't for the rather remorseless hatchet job Hofmann does (pp. xiv-xvi) on Creighton's earlier translation. His own seems to veer strangely between the wildly colloquial and the stiff and pedantic, but for all I know that's an accurate reflection of Jünger's prose style in German - Ed.] During this muddy phase, our losses also worsened …

We spent Christmas Eve in the line, and, standing in the mud, sang hymns, to which the British responded with machine-gun fire. On Christmas Day, we lost one man to a ricochet in the head. Immediately afterwards, the British attempted a friendly gesture by hauling a Christmas tree up on their traverse, but our angry troops quickly shot it down again, to which Tommy replied with rifle-grenades. it was all in all a less than merry Christmas. [pp. 58-59] 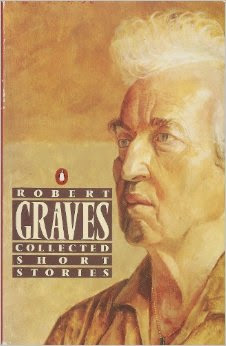 Let's contrast this with Graves's version. Well, first of all, there's a frame-story. A couple of old soldiers are educating Stanley the "Polytechnic student", who's asked them to accompany him on a "Ban the Bomb" march. Impatient with their attitude, Stan bursts out:

"Oh, can it, Grandfather! ... You're a professional pessimist And you didn't hate the Germans even when you were fighting them - in spite of the newspapers. What about that Christmas Truce?" [p.101]

But the point, according to them, is not so much the "Christmas truce" itself, as its follow-up the year after:

"Tell this lad about the two Christmas truces," I said [to his mate Dodger Green, who's just dropped by], "He's trying to enlist us for a march to Moscow, or somewhere."

Stan's grandfather was wounded in hospital at the time, so he saw nothing of the complex festivities, football games, magic show, slap-up feed, which Dodger describes. Even then, in 1914, there were exceptions:

the Prussians weren't having any. Nor were some English regiments: such as the East Lancs on our right flank and the Sherwood Foresters on the left - when the Fritzes came out with white flags, they fired over their heads and waved 'em back. But they didn't interfere with our party. It was worse in the French line: them Frogs machine-gunned all the "Merry Christmas" parties … Of course, the French go in for New Year celebrations more than Christmas. [pp. 105-6]

When it came to Christmas 1915, however, Stan's grandfather takes up the tale:

"Keep in your trenches, Wessex!" [Colonel Pomeroy] shouted over his shoulder. And [Major Coburg] gave the same orders to his lot.

"After jabbering a bit they agreed that any bloke who'd attended the 1914 party would be allowed out of trenches, but none of the rest - they could only trust us regular soldiers. Regulars, you see, know the rules of war and don't worry their heads about politics nor propaganda; them Duration blokes sickened us sometimes with their patriotism and their lofty skiting, and their hatred of 'the Teuton foe' as one of 'em called the Fritzes." [p.112]

The party this time is a disaster. One of the British soldiers seizes the opportunity to take revenge for "a brother killed at Loos" [p.114]. Even though he only wounds rather than killing the German officer he shoots, the damage is done. The British colonel is court-martialled, and there is no further fraternising between the two sides. Stan's grandfather's conclusion is a pessimistic one:

"Now listen, lad: if two real old-fashioned gentlemen like Colonel Pomeroy and Major Coburg - never heard of him again, but I doubt if he survived, having the guts he had - if two real men like them two couldn't hope for a their Christmas Truce in the days when 'mankind', as you call 'em, was still a little bit civilised, tell me, what can you hope for now?" [p.115]

Dodger, however, has a less gloomy take on the whole affair: "… don't listen to your Grand-dad. Don't be talked out of your beliefs! He's one of the Old and Bold, but maybe he's no wiser nor you and I."

Hofmann's commendation of what he sees as the "Homeric" reticence of Jünger's version comes, in part, from its chronology:

As well as being one of the earliest books on World War I ["published long before the likes of Blunden, Graves, Remarque and Sassoon, all of which appeared in the later 1920s, at a classic ten-year distance from the events they describe, giving their public and themselves time to recover" (p.viii)], Storm of Steel is also one of the newest, and it seems likely that it gained in both respects. If one might put it like this, in addition to outflanking the competition by getting in ahead of them, Storm of Steel also outlasted them: the experience it offers the reader is both more immediate and more considered, more naively open-ended and more artistically complex, more Sartre-ish and more - what shall I say? - Paterian. [p.xiii]

Now it's certainly true that the contrast between Jünger's and Graves's version of Christmas 1915 does not come out heavily in favour of the latter. Graves's story is a bit neat, a bit magazine-ish, which is possibly why he did not include any of this material in his own "classic" war memoir, Good-bye to All That (1929 - also heavily revised in its 1957 edition, which rather makes nonsense of Hofmann's claims for the superior "consideration" Jünger was able to give his own book). 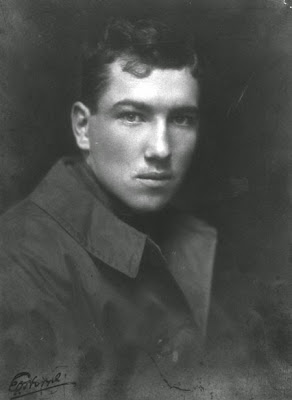 But one can't really have it all ways at once. Having read this encomium on Jünger's epic, it came as a bit of a shock to turn to the book itself. Even Hofmann grants that "Sometimes the progress seems slow and a little lumbering," combining all the various elements of the narrative into "one great narcotic experience." It is, not to put too fine a point on it, quite a boring book. At first, at any rate - certainly to readers used to the "one-off contrasts and ironies" of Graves, Sassoon and Blunden: their sheer story-telling ability, in other words.

This is not to say that I don't see Hofmann's point. There is a cumulative effect to Jünger's writing which is quite different to that of the great English and French memoirists and novelists of the war - different, too, from other German authors such as Erich Maria Remarque or Arnold Zweig. But "Sartre-ish and … Paterian"! Is he relying on the fact that no-one really reads Marius the Epicurean anymore, let alone Pater's less well-known works (with the possible exception of that one piece of prose poetry about the Mona Lisa which Yeats re-lineated and included in his Oxford Book of Modern Verse)? Hofmann himself admits:

I could never understand, unless it was for doctrinal political reasons, why Sartre, asked about Jünger, said merely: "I hate him." [p. xx]

Well, duh! Whatever the complexities of his relations with the Nazis, the fact that a good many of his problems with them stemmed from the fact that they weren't nationalistic enough (a bit like Heidegger, who saw Hitler and his mob of thugs as too "compromised by modernity" to preserve the purity of their Germanic ideals) might have something to do with explaining why so prominent an anti-fascist as Sartre might quite simply hate a silly old fool like Ernst Jünger.

Storm of Steel may or may not be a great book. It's certainly an interesting book - though frighteningly unreflective about the larger implications of the communal bloodletting Ernst and his comrades are indulging in (perhaps the "Homeric" quality Hofmann detects so readily in it comes more from the moral and ethical blindness displayed by the narrator than from any true approach to the unsentimental - though not, I would argue unfeeling - objectivity of the author of the Iliad).

I can't accept that it is any real rival to the great war memoirs of Blunden, Graves and Sassoon - or, for that matter, for the poetry of Wilfred Owen, Isaac Rosenberg or Edward Thomas. Their humanity and compassion continues to speak to us over the century that has elapsed since the first Christmas Truce (if such an event ever really took place, except symbolically). Jünger, for me, is more of a horrible warning - of what happens when you subtract those elements from a person, either through nature or nurture, but instead simply train him to kill and be killed.

It's possible, then, that Hofmann is right, and Jünger has more to say to us this Christmas, as the Ukraine burns and ISIL marches on the beleaguered ancient cities of Mesopotamia, about the true nature of humanity right here, right now. I don't agree with his implicit denigration of Robert Graves and the other "English memoirists" as at least equally valid commentators on the nature of war, though. What's more, when one considers that Graves published his first book of war poems in 1916, and his last stories on the subject of the war in the 1960s, Hofmann's arguments for Jünger's "outflanking the competition" begin to look a bit flimsy, also. 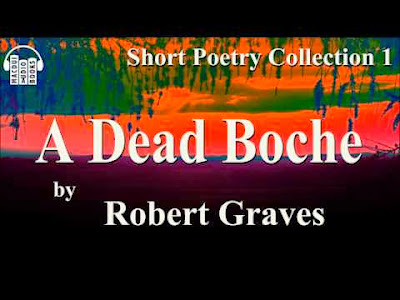 Here's a list of some classic WWI books from my collection (I haven't bothered to include very much fiction in this list, though of course Hemingway's A Farewell to Arms, Ford's Parade's End, and - more recently - Pat Barker's Regeneration Trilogy are all potentially relevant: not to mention well worth reading - or rereading, for that matter):