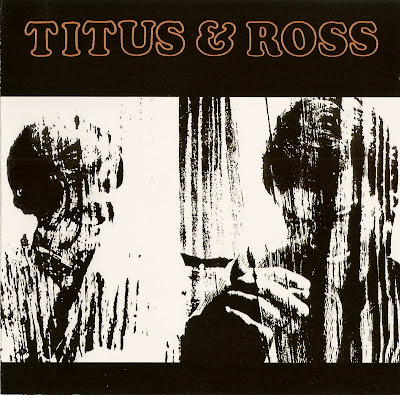 In one of Ezra Pound’s first published poems, ‘Famam Librosque cano’ ['Fame and the Book I sing' - an adaptation of the first line of the Aeneid] (A Lume Spento, 1908), he already imagines his future ‘audience’ as a ‘Scrawny, be-spectacled, out at heels’ scholar with a ‘three days’ beard’, who:

picking a ragged
Backless copy from the stall,
Too cheap for cataloguing,
Loquitur,

I picked from the Paris quais a Latin version of the Odyssey by Andreas Divus Justinopolitanus (Parisiis, In officina Christiani Wecheli, MDXXXVIII) ... I lost a Latin Iliad for the economy of four francs, these coins being at the time scarcer with me than they ever should be with any man of my tastes and abilities.
- Ezra Pound, “Early Translators of Homer,” Literary Essays of Ezra Pound, ed. T. S. Eliot. 1954 (London: Faber, 1974): 259.

As Pound goes on to mention, Divus’ Latin version of the ‘Nekuia’ (Odyssey, XI), served as the inspiration for Canto I (at the time his essay was written, c.1916, the ‘Third Canto’).

Other examples of this trope – "beautiful, neglected book, sometimes mislabelled or badly damaged, picked up for next-to-nothing on an open-air bookstall, often at the sacrifice of other treasures" – can easily be compiled. Robert Browning’s ‘old yellow book’, bought in the Piazza San Lorenzo on a June day in 1860, was (according to Charles W. Hodell's introduction to The Old Yellow Book: Source Book of Robert Browning’s The Ring and the Book. Everyman’s Library 503. 1911. (London: Dent; New York: Dutton, 1927): ix) found ‘crammed between insignificant neighbours’.

FitzGerald’s Rubáiyát of Omar Khayyám, published ‘as a small quarto, without the author’s name ... gained no notice, and most of the two hundred copies found their way into a remainder box, and were sold at a penny each’ (according to Ernest Rhys' introduction to The Rubáiyát of Omar Khayyám and Six Plays of Calderon, trans. Edward FitzGerald. Everyman’s Library 819. 1928. (London: Dent; New York: Dutton, 1948): xii). That is, until both Rossetti and Swinburne picked up odd copies independently, and the latter took it to show to George Meredith (Pound, too, refers to this incident. See The Cantos of Ezra Pound, 4th Collected ed. (London: Faber, 1987) 510 [80. 593]: ‘Rossetti found it remaindered ...’).

Similarly, in his introduction to the Thousand and One Days, a group of Persian tales translated by him from the French, Justin McCarthy tells us that:

It was on a second-hand bookstall – the very bookstall, I believe, that has been made famous by Mr. Andrew Lang in his ‘Book Lover’s Purgatory’ – that I, rummaging, discovered some little French volumes, French volumes of the last century, lettered ‘Mille et un Jours.’ The title captivated me at once. I had loved ‘The Thousand and One Nights’ all my life, but I had never heard of ‘The Thousand and One Days.’ ... They were imperfect, unfortunately, only four out of a proper five, but I bought them, and read their stories, as far as they went.
- Justin Huntly McCarthy, ed., The Thousand and One Days: Persian Tales, 2 vols (London: Chatto & Windus, 1892) 1: vii.

McCarthy goes on to tell us that he soon discovered that the Persian stories ‘were easily obtainable in modern French editions’, but it is the original (though ‘imperfect’) find which remained in his imagination. Without even bothering to follow up Andrew Lang's remarks on the subject, I think it best to move on immediately to the principal subject of this post: Scott Hamilton's recent discovery of a very interesting old CD from the 1970s: 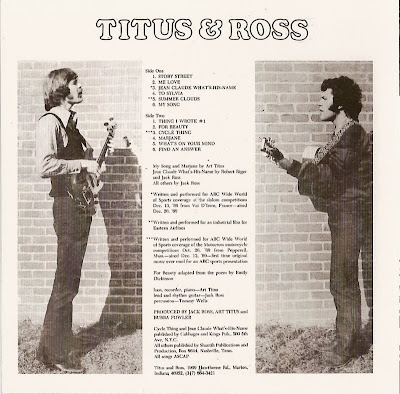 It was the age of the folk-rock duo. That Sundance Kid-looking dude on the left is (I think) Art Titus - a little reminiscent of Art Garfunkle, perhaps? - whereas his shorter, swarthier buddy is Jack Ross: clearly the brains of the outfit, if you look at their list of song credits:

I must confess to a certain indifference towards their style of music, despite Fallout Records' [home of the best rare music] exhortation on the CD cover: 'PREPARE TO BE BLOWN AWAY!'

In fact, it's a little difficult at first sight to see why anyone would want to reissue this first and only album by the 'enigmatic duo from Marion, Indiana,' whose 'origins and subsequent history remains unknown.' 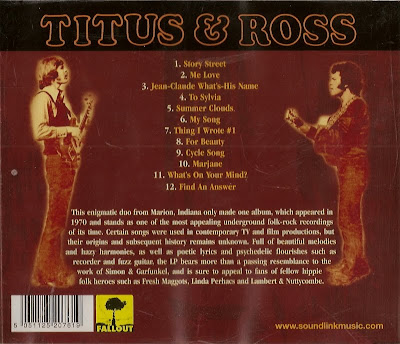 Given my own long and fruitful association with the almost equally enigmatic art-publisher Titus Books, which I'd hitherto assumed to be named after the eponymous hero of Mervyn Peake's Titus trilogy, new vistas of prophetic insight seem to be opened up by this otherwise innocuous coincidence.

I ask you, why would Titus have published four books - Trouble in Mind (2005), The Imaginary Museum of Atlantis (2006), EMO (2008) and Kingdom of Alt (2010) - by this Jack Ross (you'll find a list of various others in the sidebar opposite under the generic title "Jack Rosses of the World Unite!') over the past five years, if there weren't some ulterior motive?

I leave you to ponder that, my friends. 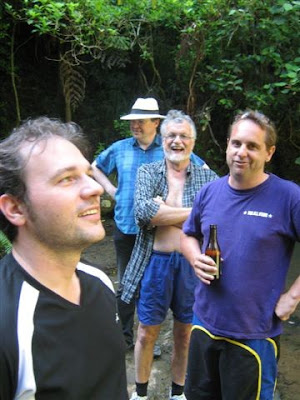 I can hear the latter in the former.