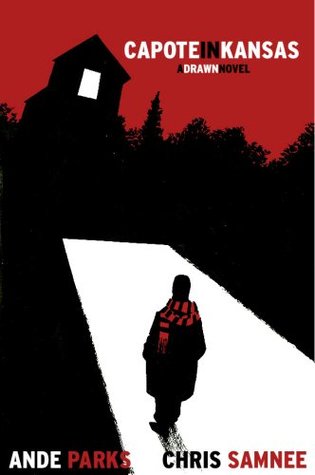 
Just as 2004 was (according to David Lodge, at any rate) the year of Henry James, so 2005 was, indisputably, the year of Truman Capote.

Two new feature films were released, both of them based on his sojourn in Kansas researching his non-fiction novel In Cold Blood, as well as the graphic novel above, which takes a distinctly different line on the whole schemozzle.

Not only that, Capote's long-lost early novel Summer Crossing was first published in 2005 (his so-called Complete Stories had appeared the year before: 'complete' until another fourteen early stories were located in the the archives of the New York Public Library, that is; along with a comprehensive selection of letters edited by his biographer Gerald Clarke). It was, to adapt a well-known phrase, a complete and total Capote-a-rama. 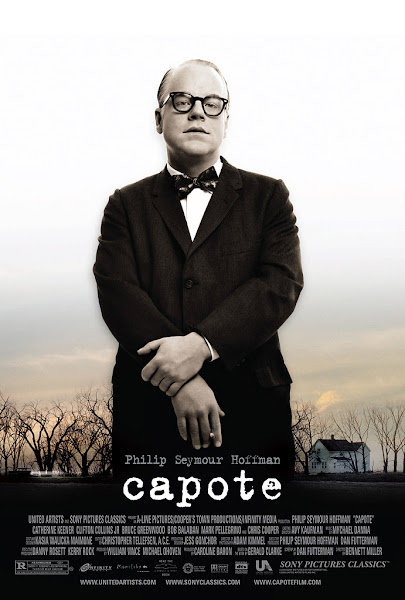 
As so often in these cases, the winner takes it all. Capote was first off the blocks, and earned most of the plaudits going before the rival movie was ready to screen. They are, admittedly, very different films - Capote austere, haunting, nuanced; Infamous more garish, gregarious, extroverted. But even the pickiest critics found it difficult to choose between Philip Seymour Hoffman's and Toby Jones's interpretations of the leading role. 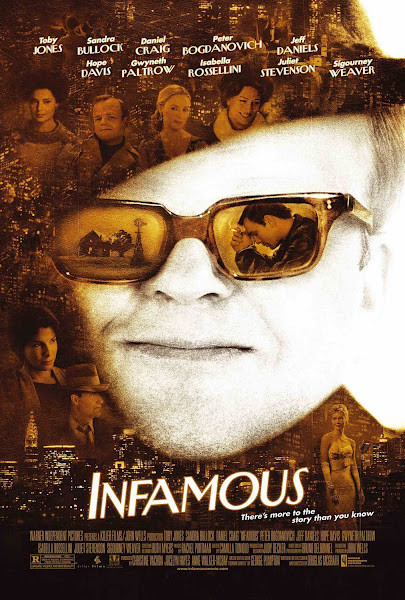 Toby Jones does, admittedly, look the part. He's very small, and manages almost to incarnate the waspish Capote - in outward appearance, at least. Philip Seymour Hoffman is, by contrast, large and hulking and bears little or no physical resemblance to Capote at all. And yet he, too, succeeded in embodying him for the purposes of the drama in a most mysterious way.

Catherine Keener probably made a slightly better Harper Lee than Sandra Bullock did, but that's largely because we're so used to seeing the latter in so many diverse comic and dramatic roles. There's not a lot in it otherwise. Daniel Craig added some necessary energy to the part of the artistic but murderous Perry Smith, but one could argue that what Infamous gained there was lost by its less-than-involving coverage of Capote's jet-setting lifestyle.

Again, plotwise, it's hard to award a clear victory to either film. Actually, it's nice to have both of them: for everyone except studio accountants, that is. The last time I can remember so clear-cut a juxtaposition as this was in the late 1980s, when the immense, Oscar-winning success of Stephen Frears' Dangerous Liaisons succeeding in pipping at the post the painstaking, no-expense-spared shoot of Valmont, Miloš Forman's carefully meditated attempt at a successor to his Amadeus (1984).

Which was the better film in that case? Without a doubt, Dangerous Liaisons. It benefited from a razor-sharp script, based on his own stage-play, by one of my favourite writers, the hugely talented Christopher Hampton. What's more, with the possible exception of Keanu Reeves, still to come into his own as the shaggy action-hero of the John Wick series, all the actors were superb: Uma Thurman, Michelle Pfeiffer, John Malkovitch, not to mention that celebrated bunny-boiler Glenn Close.

Valmont, by contrast, which probably most of you have never heard of, let alone seen, though it does include a truly wonderful performance by Annette Bening, is crippled by a soggy, over-long script - Meg Tilly and Colin Firth, too, fail to shine. It's not that Jean-Claude Carrière - scenarist for Peter Brooks' Mahabharata (1989), amongst innumerable other film and dramatic projects - is a bad writer: on the contrary, in fact. It's just that he isn't quite wicked enough to succeed in conveying the tone of the original novel. Unless, in this case, it was the director who held him back. As one critic put it:

Ouch! I suppose that the lesson to be learned here is that it's properly focussed dramatic writing that carries a film: not the sumptous nature of the production. In Amadeus Forman had an award-winning play by Peter Shaffer to guide his way. Christopher Hampton played the same role for Stephen Frears. Valmont is all over the place from start to finish - as the strangely unbalanced poster below bears witness: 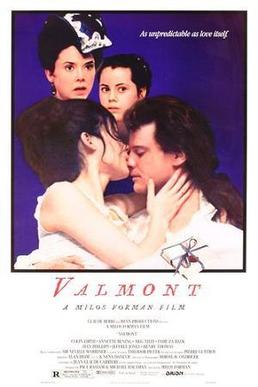 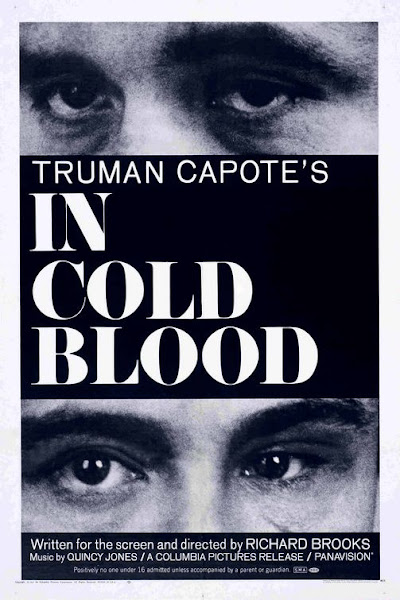 There is, of course, another film of the events surrounding In Cold Blood. Richard Brooks' 1967 film noir is an austere police procedural, which pays no attention to the bizarre saga of the book's genesis. It's cold, brutal, and yet - still - very, very watchable: in some ways the best film of the three, as witnessed by the four Oscar nominations it received at the time. 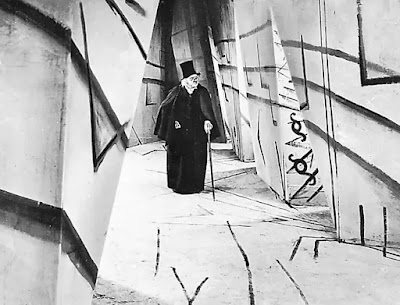 The 'drawn novel' Capote in Kansas seems more German Expressionist in inspiration. It looks, at times, like a set of outtakes from The Cabinet of Dr. Caligari, complete with crooked lines, strange perspectives, and constant doubling up of the action. 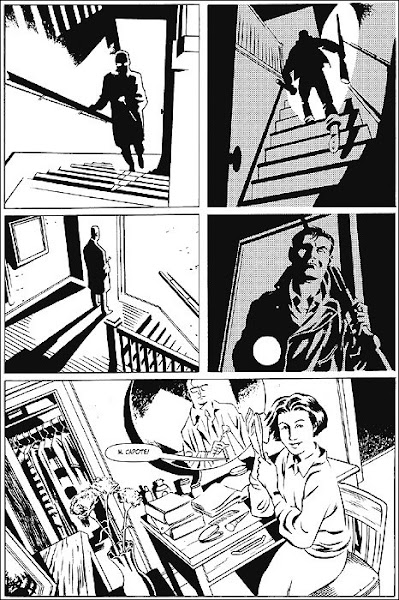 Parks & Samnee: Capote in Kansas (I)

Here, for example, we see Capote reenacting the murderer's walk up the stairs to kill the remaining members of the Clutter family. 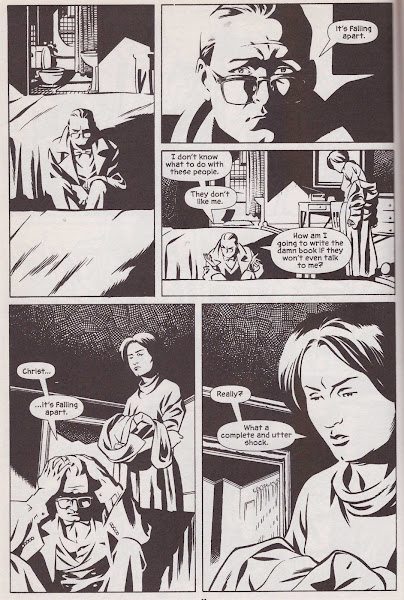 Much, too, is made of the relationship between Truman and his childhood friend Harper Lee, sooon to be the world-famous author of To Kill a Mockingbird. There are lots of ghosts there to rattle their respective cages. 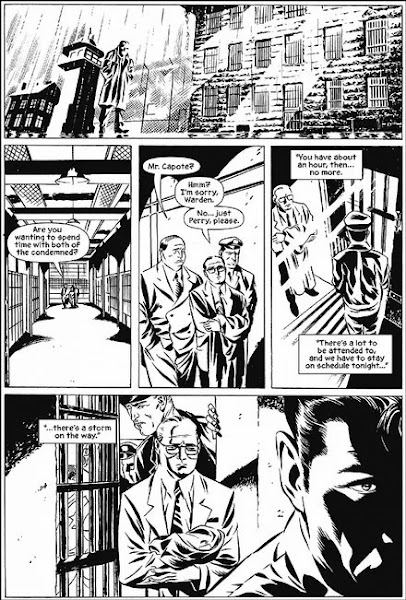 And finally, of course, there's the long drawn-out, Gothic endgame of the imprisonment of the two murderers - and Capote's consequent inability to put a full-stop to his book. 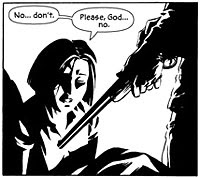 Ande Parks, understandably, pairs Capote as an unloved child with Capote as a brittle, loveless adult. More controversially, in his version of the story the rather difficult relationship between Capote and his old friend (now rival for literary fame) Harper ('Nell') Lee is doubled with his conversations with the ghost of Nancy Clutter, the muse who enables his whole project.

Interestingly enough, there appears to be another book called Capote in Kansas, published two years after Ande Parks' graphic novel by a certain Kim Powers, and described thus by a disgruntled reviewer:

Capote in Kansas’s thin plot centers on two literary myths, neither of particularly earth-shaking importance to anyone: first, that Capote ghostwrote one-hit-wonder Lee’s iconic novel and second, that Capote became so obsessed with the Kansas murders and its two psychopathic perpetrators that he was unable to write anything of significance after In Cold Blood.
- Pop Matters (16/9/2007) 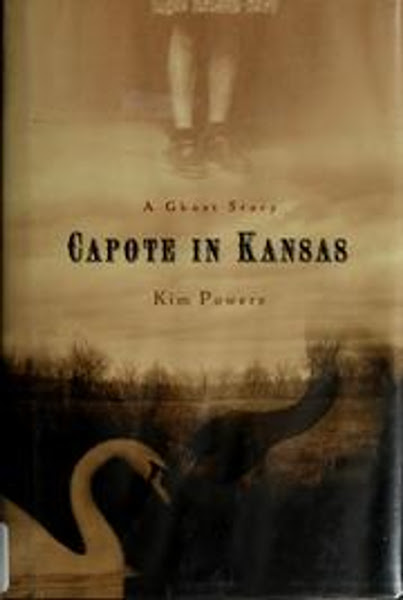 Is the somewhat tepid response to Powers' ghost story a sign that it might be time, at last, to put the whole matter to bed? It's increasingly obvious that Truman Capote is not simply going to shrivel up and go away, however much his numerous detractors, then and now, may have wished him to do. And anyone who, like me, has recently read through the 700-odd tightly packed pages of the Capote Reader can testify to the immense variety and durability of the author's gifts.

Whether you approve of him as a person or not - and it's hard, at times, to do so - his sheer charisma and charm, particularly apparent in his collected letters, remains undeniable. People are going to keep on reading him for some time to come, I suspect - and not just In Cold Blood, either.

"We're going to hear from that boy: and I don't mean a postcard," as John Turturro puts it so succinctly in Barton Fink. Time to open the doors and let some light in. 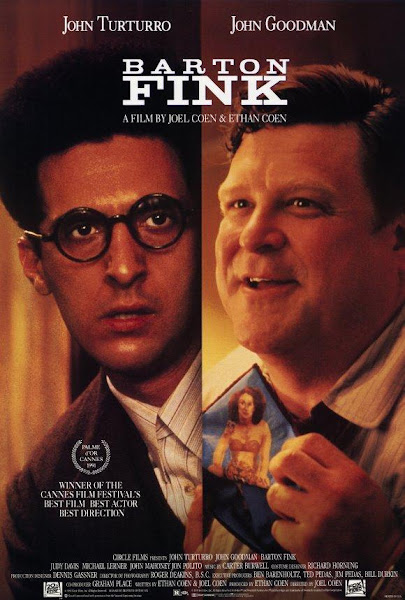 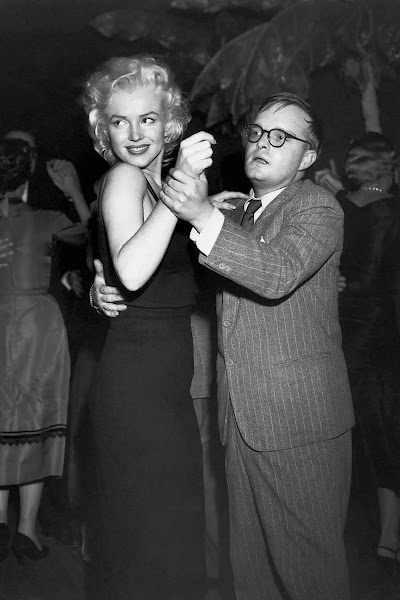 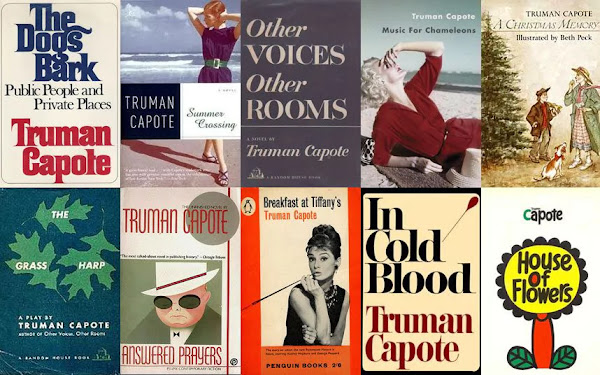