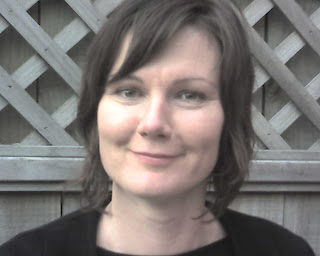 You are all most cordially invited to Pania Press's very first

in the spacious back garden of

All of you, that is, who wish to buy one or more copies of a sumptuous anthology of poems, pageworks & stories at the bargain price of $25, and (in the process) make a substantial donation to a very good cause.

The book is called:
Orange Roughy: Poems & Stories for Tazey
& includes contributions by the following writers and artists:
Martin Edmond
Graham Fletcher
Bernadette Hall
Michele Leggott
Bronwyn Lloyd
Thérèse Lloyd
Bill Manhire
Emma Neale
Susannah Poole
Tessa Rain
Richard Reeve
Jack Ross
Tracey Slaughter
Michael Steven
Damien Wilkins
I should stress that nobody involved in this project has taken a cent from it - all the proceeds, not just all the profits - are going to Thérèse in Iowa, so that's why we're anxious to sell as many of these fine books as possible.

If you can't make it to the launch, send money or a cheque to Pania HQ and we'll be happy to dispatch as many copies as you like of the book, post-free within NZ, for exactly the same price.

Orders can be made through the Pania website, either as a comment left on the site, or directly via our email address:
paniapress@hotmail.com
For further information, please follow the links above. Hope to see you on Sunday!
Posted by Dr Jack Ross at 10:29 am 2 comments: 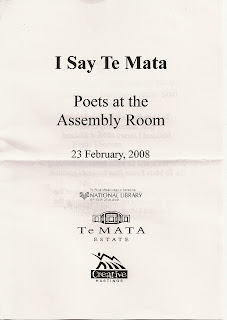 [I do have a bunch of photos I took of our little jaunt, but I must be one of the very few people still using an old-fashioned film camera, so you'll have to wait till I get the roll developed -- in the meantime, these black and white programme notes for the reading on Saturday night will have to do.]

The real unsung heroes of the whole affair, I reckon, were Tim Page and Mark Fryer, who did all the actual driving. Most of us travelled down in an (alleged) eleven-seater minibus, which actually had a bit of trouble accommodating nine + assorted baggage (including tripods, cameras, sound equipment etc.)

Then on the way back up to Auckland there was Michele's new staff to fit in behind the two front seats. It looks exactly like a pool cue. In fact it is (originally, at any rate) a pool cue. It's a lovely sky-blue, with some paua and silver at the top, and lots of white tracery of Michele-oriented imagery around the shaft.

Jacob Scott is a very contemporary artist, despite operating in such a traditional context. His murals in the marae wharekai were breathtaking visions of life in the Hawke's Bay over the past century or so. His previous laureate staffs have included (we were told) a hockey stick for Brian Turner, and a dipstick for measuring the level of winecasks for Hone. The pool cue fitted like a glove, in other words.

The Matua staff, which will now be housed in the National Library, has a firestick motif. In fact it is a firestick, though I'd hate to have to use it to produce a spark. It does, nevertheless, screw apart and could be used to provide friction if necessary. It'll be doing a bit of snuggling up to each new laureate staff in turn, apparently.

There were many highlights. Michele's moving speech after the long powhiri of welcome, where she told the assembled company how obnoxious we'd been on the drive down, and how she was going to be keeping us in line with her new stick on the way back. Not me, mind you. I was very good. I can't say the same for any of the others.

Then there was the evening reading in the massive Hawke's Bay Opera House. When I heard we were going to be in a side-room rather than the main auditorium, I had in mind something like a dusty old office in the Memorial Settlers' Hall. It was a massive ballroom! Full of tables! When we first saw it at the rehearsal on Friday night, we thought it must still be set up for a mega-wedding reception. Not so. It was set up for us. 180 people seated around huge banqueting tables.

What an audience! They laughed, they cried -- they came up and asked for autographs ... One of the real masterstrokes was the idea of asking some local secondary school students, winners of a poetry competition to read with us. I have to say that there are going to be some broken hearts when that quartet move away to the big city. And their poetry was pretty good, too.

Sorry, that sounds sarky. But the thing is, you don't really expect that much on these occasions. Just a polite clap for some piece of doggerel. But these were real poems -- by accomplished young writers. More amazingly still, they all stood up, read two poems, and sat down. That's the only reason the evening finished more or less on time. The rest of us were far less disciplined. No, they really blew me away. Come up and study writing at Massey Albany, guys -- don't let those people at Vic lure you away.

The discussion of Michele's winged words got so extravagant (and non-specific) at times, that I suspect she wondered if anyone present had ever actually read any of her books. We were able to reassure her that everybody on Matahiwi marae -- where we stayed for two nights -- was speaking from knowledge.

On the night we arrived Murray Edmond spoke for us, and his speech included a reading of a recent poem of Michele's. I guess I'm giving the game away a bit, but he prefaced it by saying that not only was it a wonderful poem (it was), but that Michele was pretty wonderful too ("though I'd never admit it to her face"). Sorry, Murray, I've blown your cover. And, yes, you're right -- Michele is pretty wonderful.

When we left we presented our hosts - now friends - at the marae with a kete of books, our books, to stay behind and be used there. I don't think any of us had anticipated that parting would be so emotional. They really took us to their hearts, and I thank them again from the bottom of mine.

Oh, and last but not least, Pipi Cafe, Havelock North, deserves all the puffs it can get for feeding a bunch of hungry poets for free, on the most sumptuous pizzas I've tasted for many a long day. Their "poesy" bread, with a little poetry postcard tucked into each packet, is well worth checking out. We were late, too, and had to take off in a hurry, so I think it's a tribute to their efficiency as well as their kindness that everyone was fed in time ...

I could go on -- the visit to Jacob's house, the swim in the lagoon, the photo-stop by Pania of the Reed, filming Rowley Habib -- but maybe that's enough for now. The people of the Hawke's Bay certainly made a bunch of Aucklanders feel more than welcome last weekend.

When's the next roadtrip? 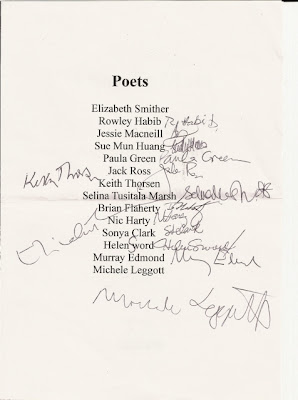 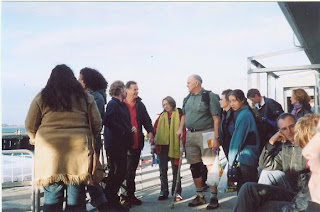 Yes, it's that time again! Poetry junkets are in the air. Here's the nzepc crew setting off for Stewart Island in Easter 2006. This year Michele Leggott, our new Poet Laureate, is taking a busload of poets down to Hawke's Bay for a powhiri and presentation of her Tokotoko carved poet's staff at Matawihi marae. This will be followed by a reading at the Hawke's Bay Opera House on Saturday night (23rd February: 8 pm. If that information makes you feel curious, then you should definitely come along).

I must confess that it's the roadtrip aspect that appeals to me most. After all, term starts on Monday, and there won't be any more fun after that till Easter at the earliest. The readings should be good, though (even if that Stewart Island crowd pictured below looks a little restive -- they don't know that they're about to experience the epic intensities of my "Zen and the Art of America's Next Top Model" poem). 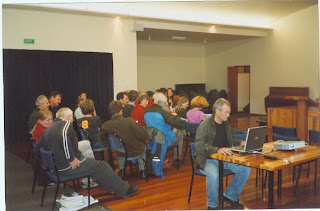 So here's the (planned) list of readers on Saturday night (everyone's promised to keep to five minutes each, so it'll be short, sharp and very disciplined):

And as for that "Te Mata" pun ... I guess the idea is that this is a kind of changing of the guard between the five Te Mata Vineyard Poet Laureates and the new National Library-funded Laureates. The same kind of thing happened in America, as I understand it, when the rather unglamorously-labelled "Poetry Consultant to the Library of Congress" became the "Poet Laureate of the United States." I think we can all drink to that -- in Te Mata sauvignon blanc, preferably.
Posted by Dr Jack Ross at 9:30 am 1 comment: