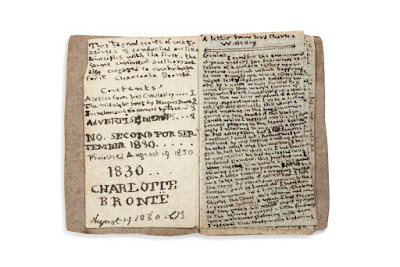 
I remember when I used to buy those fat old volumes of the works of some poet or other, they would almost invariably include a section at the front entitled 'Juvenilia.'

Kindlier editors would relegate this to the appendices, so that it didn't constitute one's first introduction to - say - Wordsworth or Tennyson, but those obedient to the remorseless dictates of chronology would place those sorry scraps of verse right there, front and centre, the first thing the eye was likely to light upon.

There's a passage in W. H. Auden's long narrative poem 'Letter to Lord Byron' where he imagines his own fate in the next world:

You know the terror that for poets lurks
Beyond the ferry when to Minos brought.
Poets must utter their Collected Works,
Including Juvenilia. So I thought
That you might warn him. Yes, I think you ought,
In case, when my turn comes, he shall cry ‘Atta boys,
Off with his bags, he’s crazy as a hatter, boys!’

Now was the fear an entirely idle one in his case. The remorseless hand of Katherine Bucknell, editor of this and many other volumes of literary remains by the poet and his great friend Christopher Isherwood, has not allowed even this sacred turf to remain untrodden: 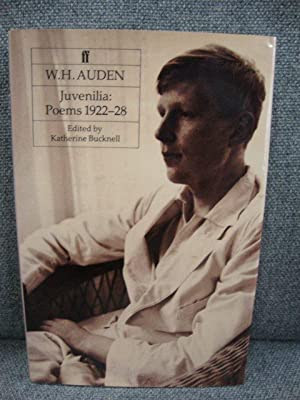 It's true that some of Auden's early verse is very good - excellent imitations of Thomas Hardy and Edward Thomas, for the most part - but none of it quite reaches the level of the poems included in his first, 1928, chapbook, let alone the Faber-published Poems (1930). 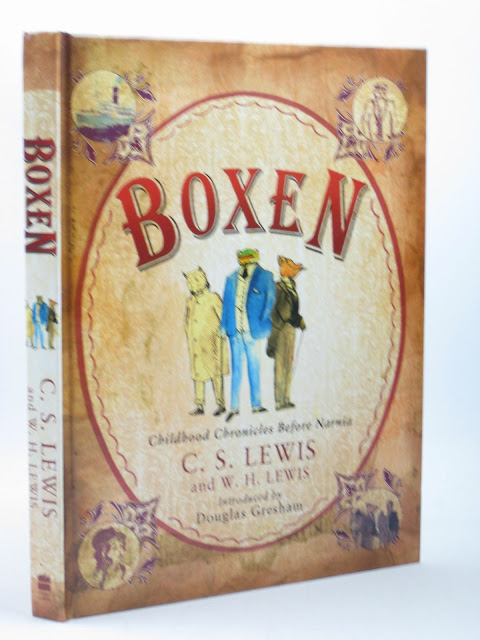 You have to be pretty high up the index of salability (as well as critical reputation) to merit publication of your juvenilia, it should be said. Another recent instance is C. S. Lewis, whose childish 'beast fable' world of Boxen first saw print in 1985, and then again - in a greatly expanded edition - in 2008.

Those who were hoping for something prophetic of the Narnia books were in for a bit of a disappointment, but so great is the interest in him that both books appear to have sold quite well to Lewis 'completists' (such as myself). 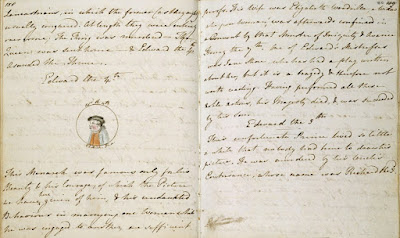 
A rather better known example is (of course) Jane Austen, whose juvenilia first appeared in print in the early twentieth century, and was added by R. W. Chapman as an extra to his classic five-volume edition of her novels in 1954. 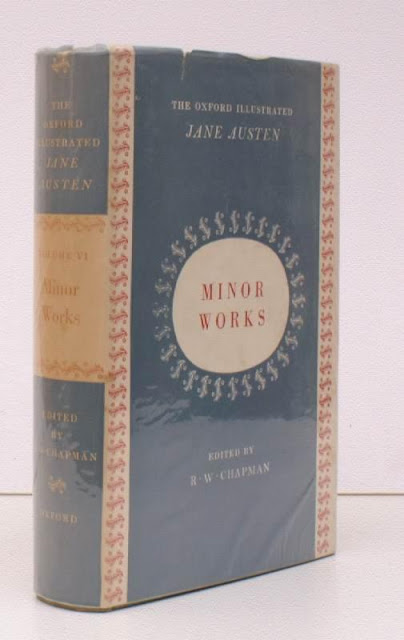 I suppose the essence of a really impressive body of juvenilia is that it needs to be created in partnership with a sibling or other collaborator. That was the case with C. S. Lewis and his older brother Warnie, as well as Jane Austen and her older sister Cassandra, illustrator of the classic "History of England … By a partial, prejudiced and ignorant Historian." 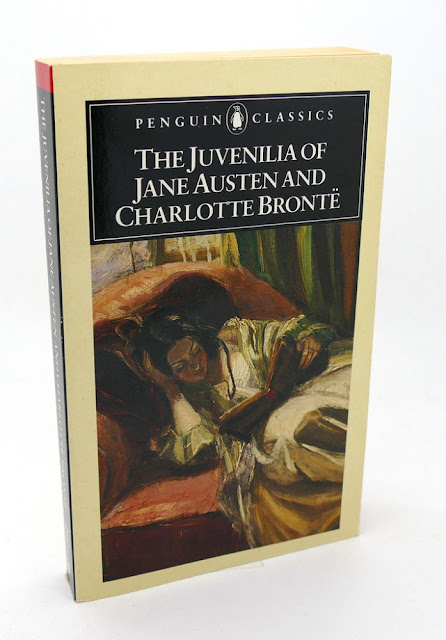 Of course there's no question who are the most famous family of juvenilia writers of all time - and I don't mean Daisy Ashford and her sisters, for all the undoubted charm of The Young Visiters and its successors. 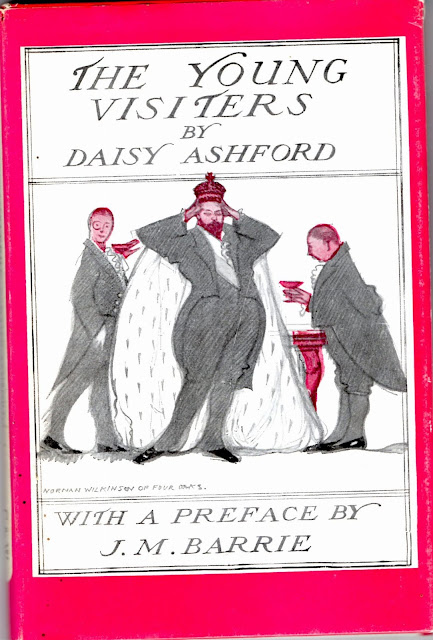 
I refer, of course, to the Brontës: Anne, Branwell, Charlotte, and Emily. The story goes that their father Patrick came home one day in 1826 with twelve wooden soldiers, which he meant to be a birthday present for Branwell, who was about to turn nine. His older sister Charlotte (10), and the two younger girls Emily (7) and Anne (6) each chose a particular soldier as their own, and began to elaborate a complex game around these "Young Men" (as they called them):

However, it was not until December 1827 that their ideas took written form, and the imaginary African kingdom of Glass Town came into existence, followed by the Empire of Angria. Emily and Anne created Gondal, an island continent in the North Pacific, ruled by a woman, after the departure of Charlotte in 1831. In the beginning, these stories were written in little books, the size of a matchbox (about 1.5 x 2.5 inches—3.8 x 6.4 cm), and cursorily bound with thread. The pages were filled with close, minute writing, often in capital letters without punctuation and embellished with illustrations, detailed maps, schemes, landscapes, and plans of buildings, created by the children according to their specialisations. The idea was that the books were of a size for the soldiers to read. The complexity of the stories matured as the children's imaginations developed, fed by reading the three weekly or monthly magazines to which their father had subscribed.
- Wikipedia 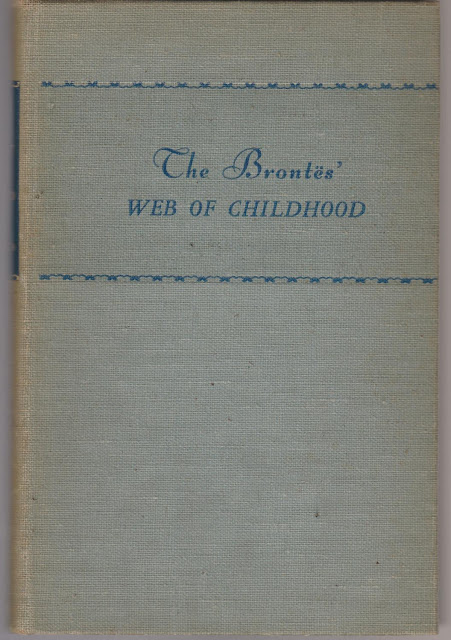 The classic account of all this is Fannie Ratchford's The Brontës’ Web of Childhood. She followed this up with a rather more controversial rearrangement of Emily Brontë's Gondal poems, which she saw as a connected series of lyric moments which could be linked into a 'verse novel' about a single protagonist, 'A. G. A.' - Queen Augusta Geraldine Almeda. 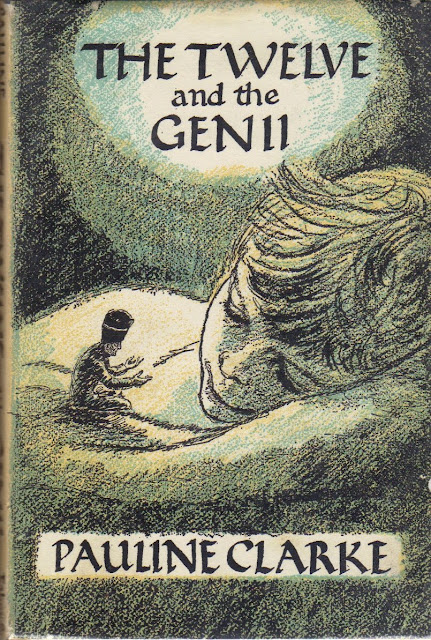 An even more imaginative response to their imaginary world can be found in Pauline Clarke's 1962 children's book, which concerns the further adventures of the twelve toy soldiers immortalised in the Brontë children's - the 'Genii' of the title - tales of Glass-town, Gondal and Angria. 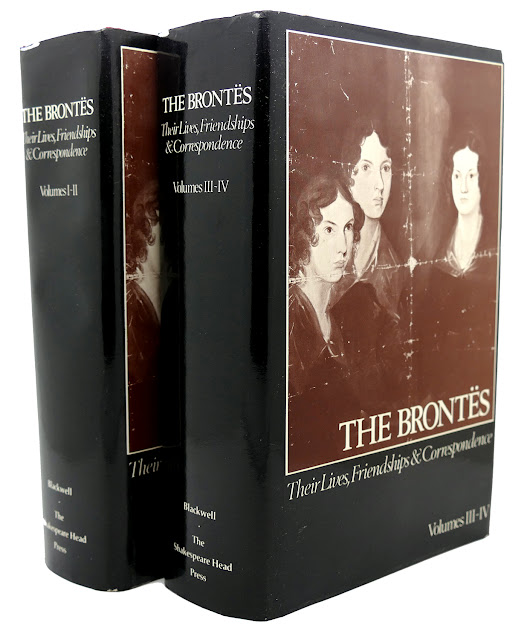 Actually reading the stories themselves is not so simple as it might appear. For a long time the most complete edition available was that produced by celebrated literary forger and thief Thomas J. Wise, in collaboration with John Alexander Symington, in 1936.

However, given that he:

privately printed abridged and inaccurate editions of ... [the] manuscripts; he removed the original covers from a number of the booklets and had them rebound for his own personal library; and others he took apart page by page, selling the fragments to friends and acquaintances.
- The Cambridge Companion to the Brontës, ed. Heather Glen (Cambridge: Cambridge University Press, 2002): 37

that's not really saying very much. 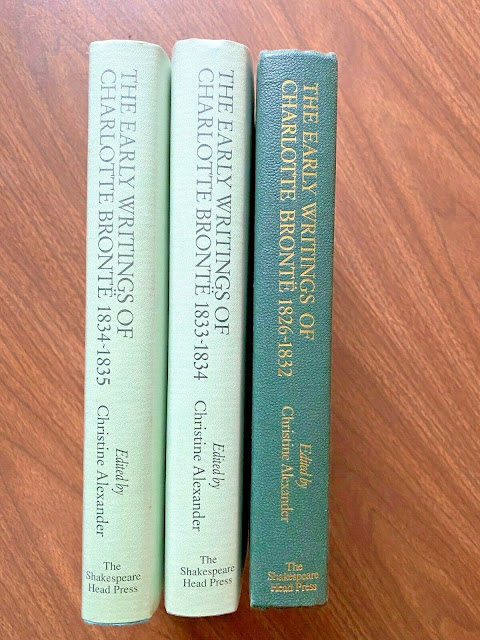 Light began to dawn on this unsatisfactory situation in 1987, when New Zealand-born Academic Christine Alexander started to publish her magisterial, 3-volume edition of the Early Writings of Charlotte Brontë.

I recently purchased all three of these books from Browsers Bookshop in Hamilton. Somewhat poignantly, it turned out to be a gift set presented by the editor to her old school, Woodford House. Judging from the library slip at the back, it had only ever been borrowed once, so I suppose it made sense to de-accession it. Anyway, their loss is my gain. 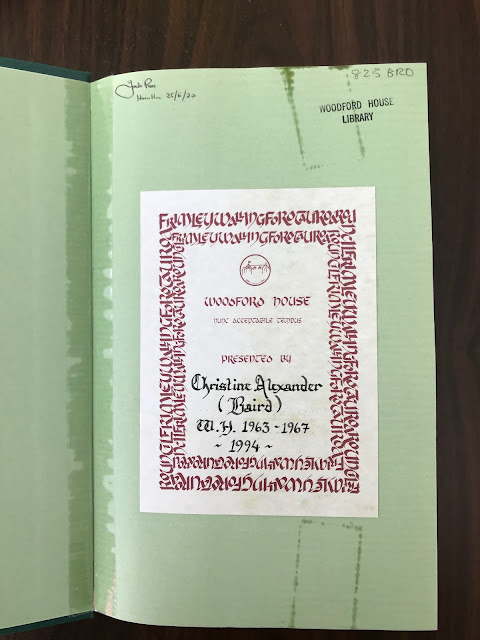 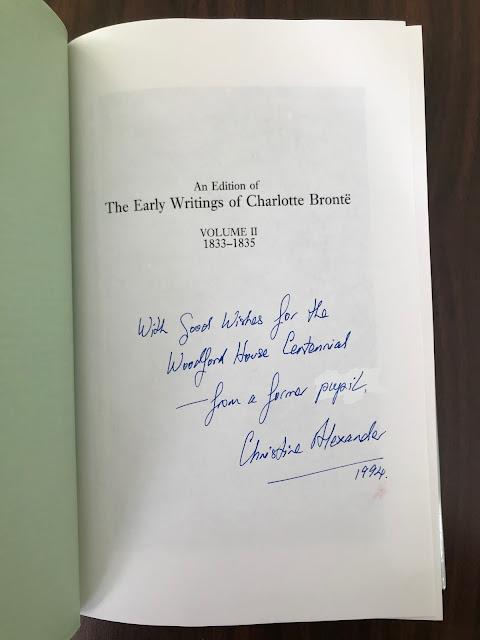 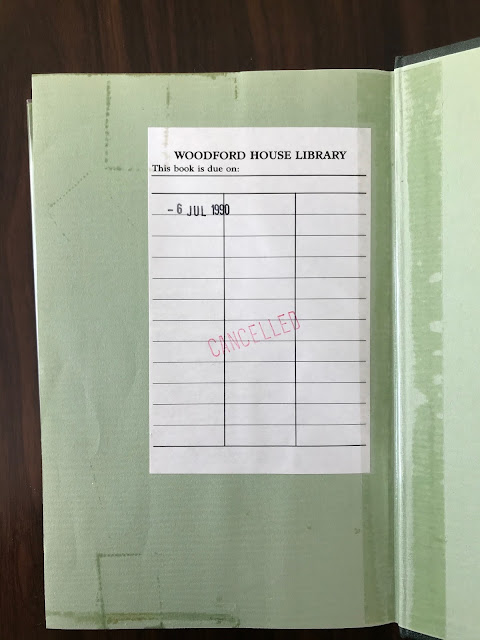 The fact that it proclaimed itself to be a three-volume edition and it was three volumes I bought led me, mistakenly, to think that it was complete. Not so, I'm afraid. Volume II, The Rise of Angria (1991), is divided into two separate parts.

So where's volume III? Nowhere, it would appear. For some reason the edition was interrupted mid-course, and we're still awaiting its completion thirty years later. 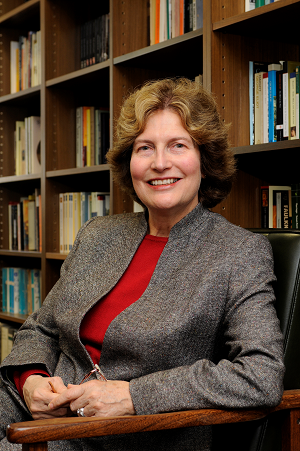 Not that time has exactly stood still in the meantime. There's been one more attempt, by Brontë scholar Juliet Barker, to provide a representative selection of Charlotte Brontë's part of the juvenilia, as well as a strange little stand-alone publication of the late play 'Stancliffe's Hotel.' 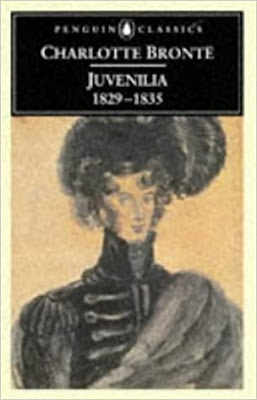 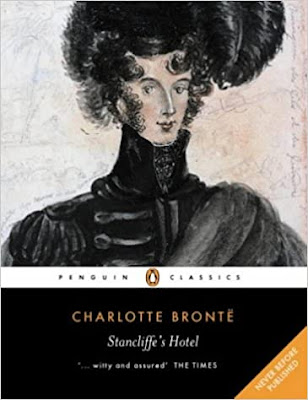 What can one say about all this? I suppose that the principal interest we take in the juvenilia of subsequently celebrated writer is for the echoes they presumbaly contain of their later, more accomplished works.

And yet they can have a strange charm in themselves. The Scottish writer Marjorie Fleming (1803-1811) wrote a diary in the late eighteen months of her brief life which contains such flashes of charm and wit that it's hard to put down even now. 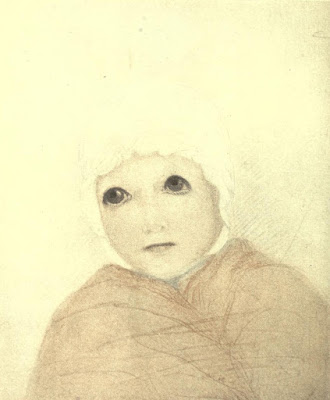 I'm not sure that the same can be said of Opal Whiteley's very odd diary, which was all the rage in the roaring twenties, but seems now to have been some kind of an odd hoax. 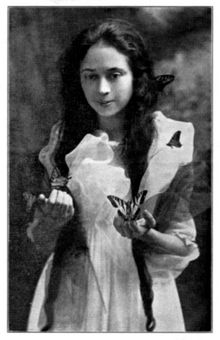 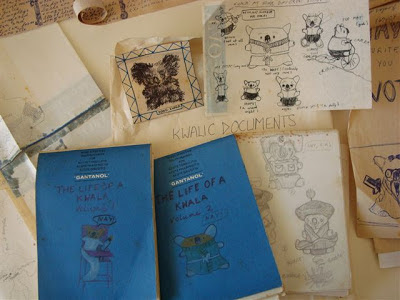 I have to add, as a postscript to this post, some links to the Mosehouse Studio posts Bronwyn Lloyd has devoted to the childhood writings and drawings of my own family - mostly to do with our toy Koala bears, inhabitants of the city of Kwalalumpa, mapped and genealogised with almost Brontë-like zeal by my sister Anne and myself. 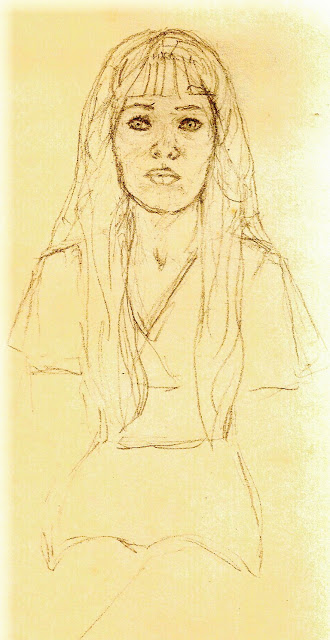