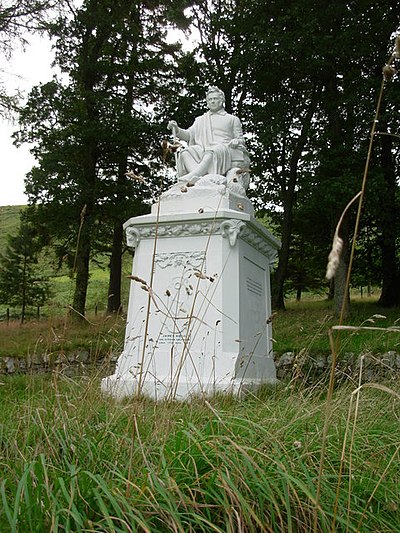 
While I was living in Edinburgh in the late 1980s, a friend of mine, Martin Frost, and I were in the habit of driving madly around the countryside of Scotland in his tiny Mini in search of cups of coffee and chocolate cake - perhaps also in a vain attempt to evade the inevitable consequences of continued inattention to our studies ... "An element of pleasure-seeking there," as a cousin of mine, Roddie Macleod, remarked of a neighbouring farmer who'd been in the habit of going into Dundee from time to time to disport himself. If such a thing is possible in Dundee, that is.

On one of these expeditions, we happened upon St. Mary's Loch, and found the statue above, dedicated to the famed Ettrick Shepherd, James Hogg, but memorable mainly for the inscription on its base, the rather extravagant encomium:

He taught the wandering winds to sing

Since then I've discovered that that is the last line of his book-length poem The Queen’s Wake (1813), so perhaps it wasn't quite so vainglorious as I imagined. 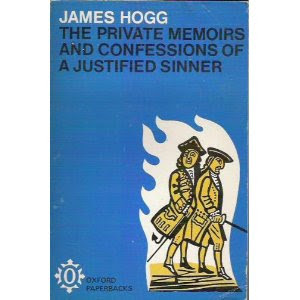 
I'm not sure if I'd read his novel The Private Memoirs and Confessions of a Justified Sinner at the time. If not, it must have been shortly afterwards, because I remember that it had an electrifying effect on me. Why had I never heard of this novel before? It was every bit the equal of - possibly even better than - Stevenson's Dr Jekyll and Mr Hyde, and the sheer intensity and strangeness of the writing would be hard to match outside the works of De Quincey or even Edgar Allan Poe.

It does, in fact, bear a certain resemblance to such doppelgänger stories as Poe's "William Wilson" (1839) or Melville's "Bartleby, the Scrivener" (1853), though of course it long preceded them. The title may owe something to De Quincey's Confessions of an English Opium Eater (1821), but they have little else in common.


In 1947, in his introduction to a new edition of the complete, uncensored text of Hogg's novel, the Nobel prize winner for that year, André Gide, confessed that he had read 'this astounding book ... with a stupefaction and admiration that increased at every page'. So, just as in the case of Poe, it was largely the admiration of the French (Baudelaire and Mallarmé for Poe; Gide for Hogg) that first plucked these great writers from provincial obscurity and brought their work to the attention of readers everywhere.

As you can see in the bibliography below, the pruned and bowdlerised versions of Victorian editors have been succeeded by a complete, textually rigorous edition of James Hogg's Collected Works. Whatever form you read it in, though, The Confessions of a Justified Sinner is every bit as important a text in the Fantastic tradition as Potocki's Manuscript Found in Saragossa (1805-15) or Schiller's Ghost-Seer (1787-1789). Indeed, it rivals Frankenstein itself. 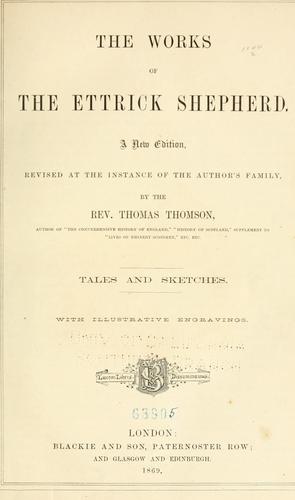 
It was therefore with a great deal of excitement that I came across a copy of The Works of the Ettrick Shepherd in Devonport the other day. Admittedly, it was in an edition "Revised at the Instance of the Author's Family, by the Rev. Thomas Thomson," which hardly inspires one with confidence in its textual integrity, but even this atmosphere of pious disdain for Hogg's "crudities" has its points of interest.

Hogg's reputation had suffered greatly from the caricatured version of him presented, under the name "the Ettrick Shepherd", in Noctes Ambrosianae, a popular series of feigned conversations which appeared in Blackwoods Magazine between 1822 and 1835. The Shepherd, a Scots-spouting buffoon, is generally upstaged by the more urbane "Christopher North" (Professor John Wilson - himself the author of most of the dialogues) and his friends "Timothy Tickler" (Robert Sym) and - occasionally - "The English Opium Eater" (Thomas De Quincey).

Hogg, who had little part in the concoction of most of these pieces, made no public comment on the matter. However (according to Wikipedia, at any rate) "some of his letters to Blackwood and others express outrage and anguish." Certainly this picture of him as "a part-animal, part-rural simpleton, and part-savant" coloured his reputation throughout the nineteenth and early twentieth century.

A chance remark by Hogg to Wordsworth describing the two of them as fellow bards was greeted with some disdain by the English poet. His 1835 "Extempore Effusion upon the Death of James Hogg" includes the following stanza:

The mighty Minstrel breathes no longer,
'Mid mouldering ruins low he lies;
And death upon the braes of Yarrow,
Has closed the Shepherd-poet's eyes.

However, the first two of these lines probably refer to Sir Walter Scott. Wordsworth's own notes on the poem say of Hogg: "He was undoubtedly a man of original genius, but of coarse manners and low and offensive opinions." 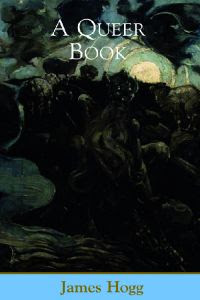 
All this patronising nonsense about his having somehow been a genius in spite of himself has hopefully now been laid to rest. Hogg is increasingly seen as a pillar of Scottish literature, in the tradition of Burns, Scott and Stevenson, as well as a profound influence on writers as diverse as George Douglas Brown, Alasdair Gray and Irvine Welsh. 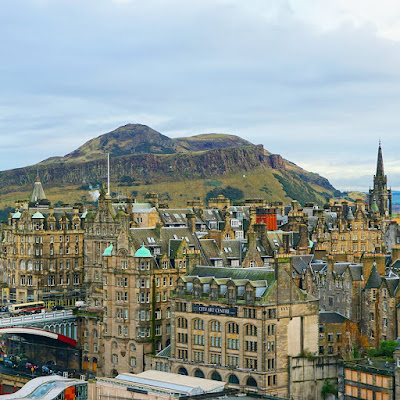 
For myself, I think that it was partly the fact that I was living right in the middle of the place where his novel is set which lent the book such an extraordinary atmosphere for me. I boarded in a Hall of Residence sited directly below Arthur's Seat, and sat on the edge of Salisbury crags reading Baudelaire on more than one occasion. 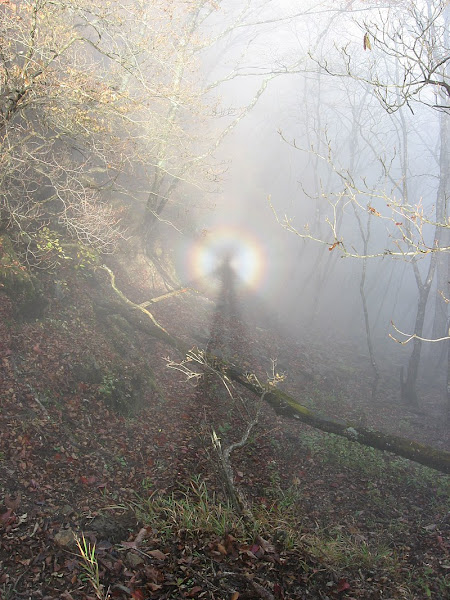 
The scene in Hogg's novel where the narrator sees the approach of an extraordinary apparition (which turns out to be a version of the famous Brocken spectre) was therefore located right on my front doorstep. 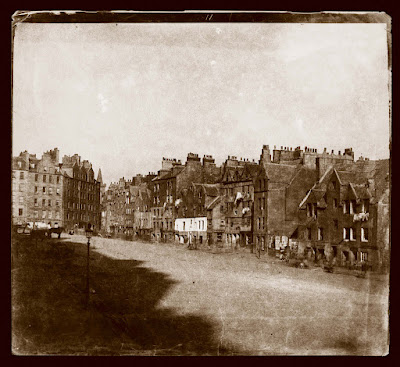 Nor has the rest of the city changed much since the nineteenth century. There's still the Old Town running down the Royal Mile from the Castle to Holyrood Abbey; the 18th-century New Town, with its Palladian squares and crescents, off to one side of it; and then all the Victorian infill housing shading off to the South. Such landmarks as the Cowgate and the Grassmarket remain pretty much as they were in Hogg's time.

It's strange for someone from the Antipodes to reside in so changeless a place, with the ghosts walking around right in front of you rather than drowned in a sea of new construction. Not restful, exactly, but somehow very satisfying to anyone with a strong sense of tradition.

If you've never read his novel, I envy you your first experience of it. Make sure that you choose the right text, though. The older editions of Hogg are quite unreliable. What you want is one based on the 1824 version - as most of them now fortunately are. It's not a case like Frankenstein where both texts, the 1818 one and Mary Shelley's 1831 revision, have their own points of interest. There's little evidence that Hogg had much - if anything - to do with the posthumous 1837 reprint of his novel, and (as Wikipedia puts it) "the extensive bowdlerization and theological censorship in particular suggest publisher's timidity." 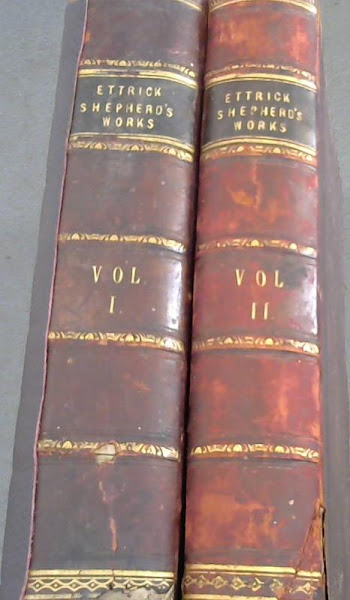 James Hogg: The Works of the Ettrick Shepherd (c.1874) 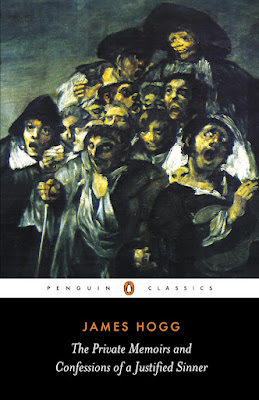 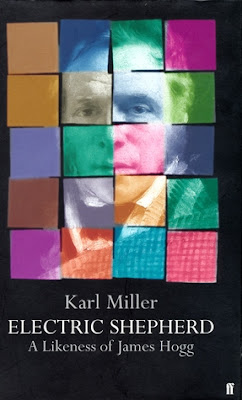 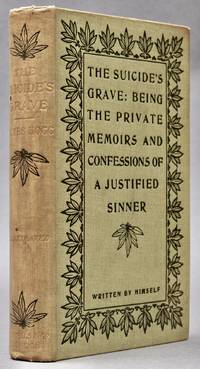 I and my friend read 'The Confessions...' one of the few things we agreed about was that this was a great thing. I re-read Dr. Jekyll and Mr. Hyde which is a great book recently. I should re-read this book also.

I became convinced that the protagonist was de facto the Devil, or is it near the end that he is accompanied by someone as he leaves town, by a strange person who is, it seems, like the Devil.

(I recall now that he is under the influence of a man who claims he can commit crimes and escape conviction. That indeed was a strange belief of certain very fundamental Christians (as you know the idea of Election). I am convinced that the great classics are all worth reading and re-reading if one has time. This book is relatively short. Stevenson's book was worth the re-read, as having read it as a teenager (I got it as a prize for first in the then 6th Form in Biology, lost or somehow mistakenly sold my copy, found another).

My edition is based on the one edited by Carey, from the 1824 version which is good.

There is someone who wrote about that area of Scotland and Hogg. But I cant recall the book. I didn't finish it. But what I read was good. It was a woman, I am pretty sure she is a fairly well know novelist. But I forget.)

There is a sense of isolation about the novel which I think is also in De Quincey's book, which is quite different. I obtained an old edition of almost all the works of the latter...But your find is a great one!

And it was great you were reading of something and someone from your own country of origin. I look to people from Northants or Leicester, or Bedfordshire (mainly Northants), and Banaba Island as well as London for my 'origins'...at least I have thus some connection to Dickens...or whoever.

Wordsworth wasn't always quite so acerbic...I read that he changed as (grew older, and) he became disillusioned by the French Revolution. But I suppose it remained true he was of a somewhat 'higher class', or later thought he was, which was the trouble. Perhaps an actual "ghost" etc and a murderer was "too much reality" to bear. Or too much fantasy.

Perhaps in the early days with the complex Coleridge, of Kublai and Frost at Midnight, In My Lime-Tree Bower My Prison, 'The Rime..', and Christabel etc there would have been more sympathy. But Opium addiction didn't help Coleridge sadly.

But in earlier days that group may have looked more favourably on Hogg's great work.

Hogg did something that no one did for a long time. Did Mary Shelley read it? Her Frankenstein was destroyed I feel by movies. There were parallels to Hogg's work but it is an eerie and powerful work. The book's the thing.

It's possible Mary Shelley did read Hogg's book. It was published in London, after all. But of course Frankenstein does have priority, having already appeared in 1818.

It's worth remembering, though, that the famous ghost-story-writing sessions of Byron, Polidori, Shelley, and Mary on Lake Geneva, during the 'haunted summer' of 1816, took place after they'd all been reading German ghost stories together.

The Gothic tradition went far beyond just English writers, but unfortunately most modern commentators aren't as well read in European literature as the Romantics themselves were.

Yes, I read how it was made. Mary Shelley I think was the only one to actually write a book. Ghosts, but also science and religion were involved. Part of this I found reading Richard Holmes The Age of Wonder. I agree the tradition of novels and ghost stories etc go way back. We artificially close them off. Reading some Elizabethan novels. But indeed there were many European novels and poems and as you have said elsewhere, the Persians, Indians, Chinese, Greeks Romans and even African and other places have added to not just ghost writing but writing in general. The ghost or gothic though is a part of "Romanticism" around that time which is a big issue on its own.