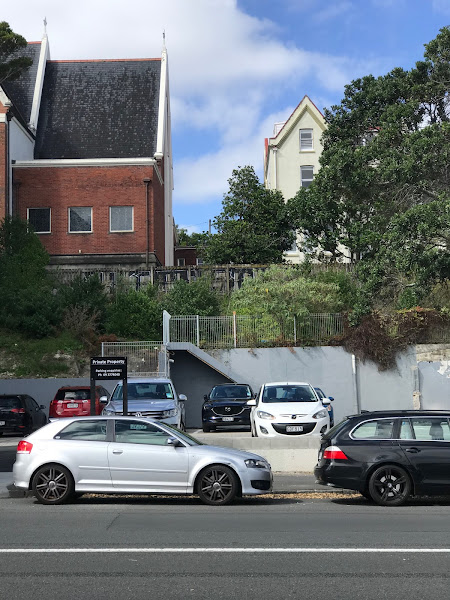 We took the bus into town last Wednesday - Bronwyn to deliver some beautiful new textile works for a group show at Masterworks Gallery on Upper Queen Street, and me to have a snout around the famous Hard-to-Find Secondhand Bookshop, which is literally just around the corner in St. Benedict's Street. 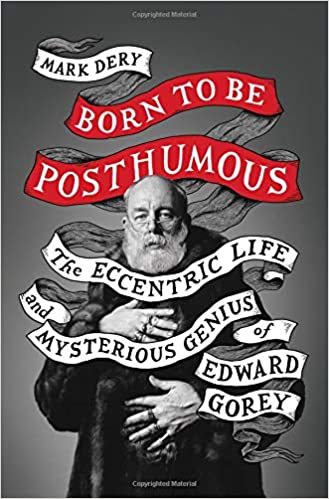 Among the books I bought was a biograpy of Edward Gorey, whose work I've been collecting for a number of years now. 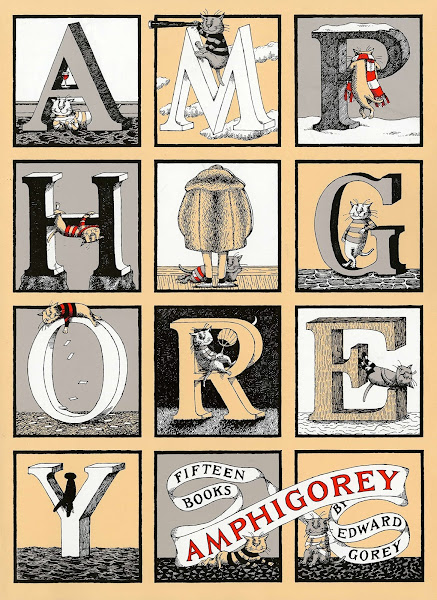 For those of you unfamiliar with the name, Edward Gorey (1925-2000) specialised in strange little picture books, set in a kind of sub-Victorian haze, which chronicled the unfortunate fates of various hapless individuals, mostly orphan children. 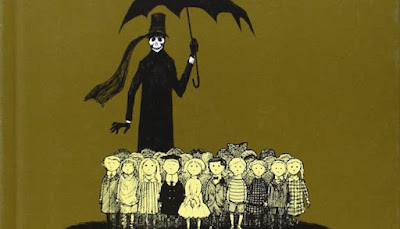 If that sounds a little macabre, it is. If it also sounds reminiscent of such works as Lemony Snicket's A Series of Unfortunate Events, or Ransom Riggs' Miss Peregrine's Home for Peculiar Children, then that's no accident. Both authors admit a considerable debt to Gorey's work, as does Tim Burton, many of whose films display his unmistakable influence. 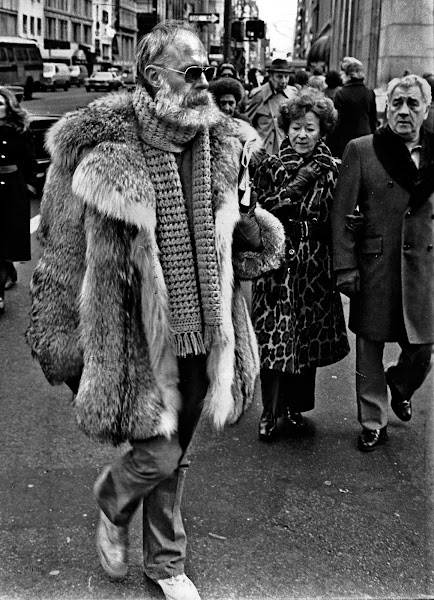 Gorey, who lived a life of high camp and preposterous eccentricity (as chronicled in an earlier book of interviews with him, Ascending Peculiarity), was certainly one of the great originals of the twentieth century. 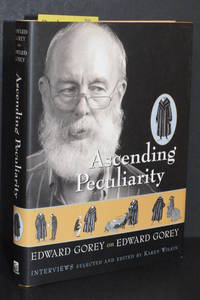 It's no surprise, then, when things begin to take on a rather Gorey-esque atmosphere after even the slightest encounter with his work. 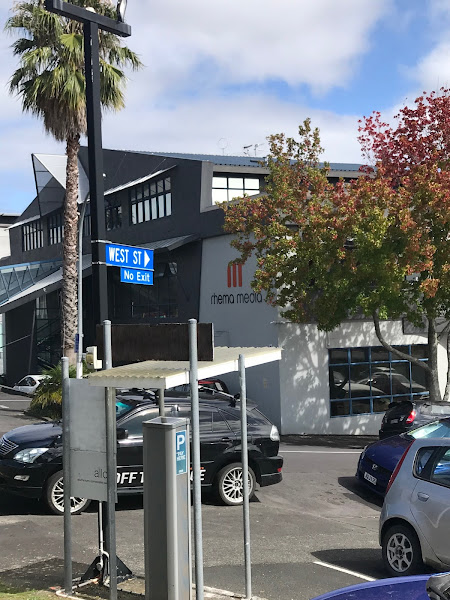 We were, as I said, in Upper Queen Street, walking down towards K Rd, on the other side of the Southern Motorway. At this point I spotted the sign, pictured above, for West Street.

Yes, and - so what? What's so important about West Street? I understand your impatience, but permit me to backtrack a little. 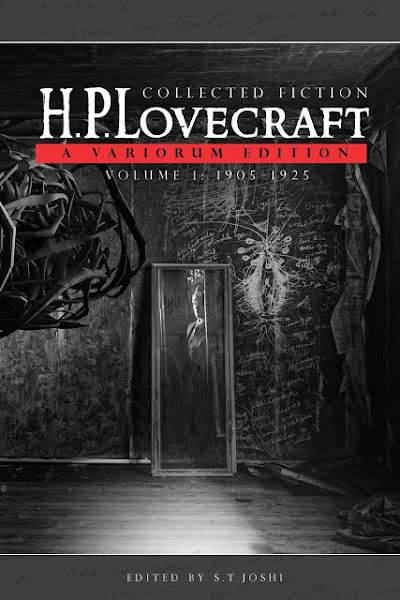 A year or so ago I purchased a copy of the latest, 'variorum' edition of H. P. Lovecraft's Collected Fiction. I've been reading through these very familiar stories of an evening before I go to sleep (which might account for some of the more baroque dreams I've been having lately).

I was interested to encounter, in that classic tale "The Call of Cthulhu," something I must have noticed many times before, a reference not only to New Zealand (the Antipodes figure quite often in Lovecraft's lists of 'eldritch' spaces), but to Auckland itself: 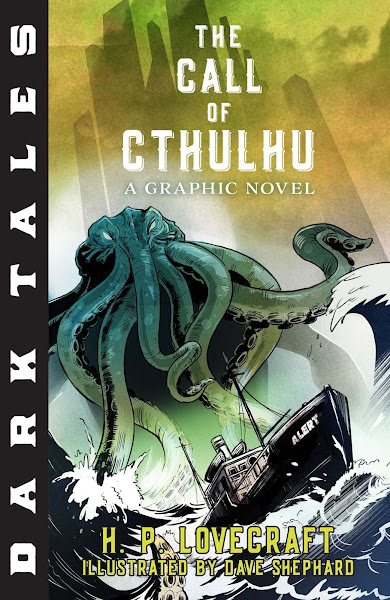 In Auckland I learned that Johansen had returned with yellow hair turned white after a perfunctory and inconclusive questioning at Sydney, and had thereafter sold his cottage in West Street and sailed with his wife to his old home in Oslo. 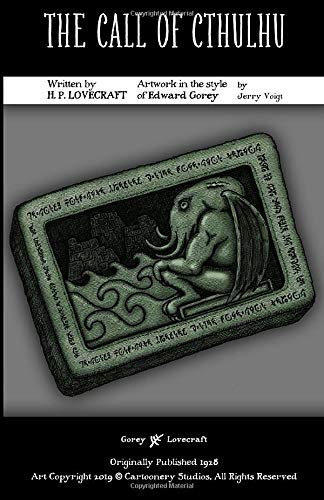 But wait. What's this? It turns out that I'm not the only one to see an affinity between Edward Gorey and H. P. Lovecraft (another useful reference is Mike Davis's 2012 article, What if Edward Gorey illustrated Lovecraft?).


Part Three of Lovecraft's "Call of Cthulhu,"entitled "The Madness from the Sea," begins with the narrator, Francis Thurston's chance discovery of:

an article from the Sydney Bulletin, an Australian newspaper, for April 18, 1925, that reported the discovery of a derelict ship in the Pacific Ocean with only one survivor — Norwegian sailor Gustaf Johansen, second mate on the schooner Emma out of Auckland, New Zealand [my emphasis], which on March 22 encountered a heavily armed yacht, the Alert, crewed by "a queer and evil-looking crew of Kanakas and half-castes" from Dunedin, New Zealand. After the Alert attacked without provocation, the crew of the Emma fought back and, though losing their own ship, managed to board the opposing ship and kill all their attackers.

The article went on to say that the survivors encountered an island the next day, in the vicinity of 47° 9' S, 126° 43' W, even though there are no charted islands in that area. Most of the remaining crew died on the island, but Johansen is said to be "queerly reticent" about what happened to them.

where, however, I found that little was known of the strange cult-members who had lingered in the old sea-taverns. Waterfront scum was far too common for special mention; though there was vague talk about one inland trip these mongrels had made, during which faint drumming and red flame were noted on the distant hills

After that he pays a flying visit to Auckland, with the results mentioned above ("Of his stirring experience he [Johansen] would tell his friends no more than he had told the admiralty officials, and all they could do was to give me his Oslo address"). So Thurston's next stop is Sydney, where:

I saw the Alert, now sold and in commercial use, at Circular Quay in Sydney Cove, but gained nothing from its non-committal bulk. The crouching image with its cuttlefish head, dragon body, scaly wings, and hieroglyphed pedestal, was preserved in the Museum at Hyde Park; and I studied it long and well, finding it a thing of balefully exquisite workmanship [...] utter mystery, terrible antiquity, and unearthly strangeness of material

"Shaken with such a mental revolution as I had never before known, I now resolved to visit Mate Johansen in Oslo."

and one autumn day landed at the trim wharves in the shadow of the Egeberg. Johansen’s address, I discovered, lay in the Old Town of King Harold Haardrada, which kept alive the name of Oslo during all the centuries that the greater city masqueraded as “Christiana”. I made the brief trip by taxicab, and knocked with palpitant heart at the door of a neat and ancient building with plastered front. A sad-faced woman in black answered my summons, and I was stung with disappointment when she told me in halting English that Gustaf Johansen was no more.

Fortunately, Johansen left behind "a long manuscript — of 'technical matters' as he said — written in English, evidently in order to safeguard her from the peril of casual perusal." From this, the narrator learns:

of the crew's discovery of the uncharted island, described as "a coastline of mingled mud, ooze, and weedy Cyclopean masonry which can be nothing less the tangible substance of earth's supreme terror — the nightmare corpse-city of R'lyeh." Exploring the risen land, which is "abnormal, non-Euclidian, and loathsomely redolent of spheres and dimensions apart from ours," the sailors manage to open a "monstrously carven portal," and from

the newly opened depths [...] It lumbered slobberingly into sight and gropingly squeezed Its gelatinous green immensity through the black doorway [...] The stars were right again, and what an age-old cult had failed to do by design, a band of innocent sailors had done by accident. After vigintillions of years great Cthulhu was loose again, and ravening for delight.

Thurston (or Johansen) writes that "The Thing cannot be described," though the story does call it "the green, sticky spawn of the stars," and refers to its "flabby claws" and "awful squid-head with writhing feelers." ... Johansen manages to get back to the yacht; when Cthulhu, hesitantly, enters the water to pursue the ship, Johansen turns the Alert around and rams the creature's head, which bursts with "a slushy nastiness as of a cloven sunfish" — only to immediately begin reforming as Johansen and William Briden (insane, and soon dead) make their escape.

After reading this manuscript, Thurston concludes that he will soon meet the fate of Johansen: "I know too much, and the cult still lives." He guesses, however, that Cthulhu, whilst restoring his broken head, was dragged down again with the sinking city, thus keeping humanity safe until the next time, when the stars are right. 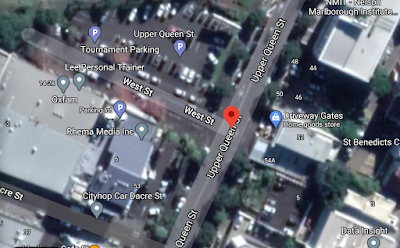 There's something rather enchanting in this account of the grand tour, ranging from the Antipodes to Scandinavia, which H. P. Lovecraft was too poverty-stricken ever to undertake in person. The rapturous letters and essays he devoted to visits to more easily attainable beauty spots such as Quebec or Charleston make it clear that nothing would have delighted him more.

Failing this, one imagines him poring over any maps and guidebooks he could locate in Providence, Rhode Island (or even nearby New York) in quest of local colour for his globe-trotting tale. 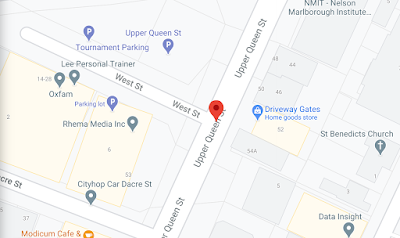 I have to say that I'd always assumed "West Street" to be a plausible fabrication on his part (what city doesn't include a few streets named after the points of the compass?). I am, after all, a native Aucklander - albeit one born and bred on the North Shore - but I could have sworn that there was no West Street hereabouts.

However, as it turns out, Lovecraft was right. 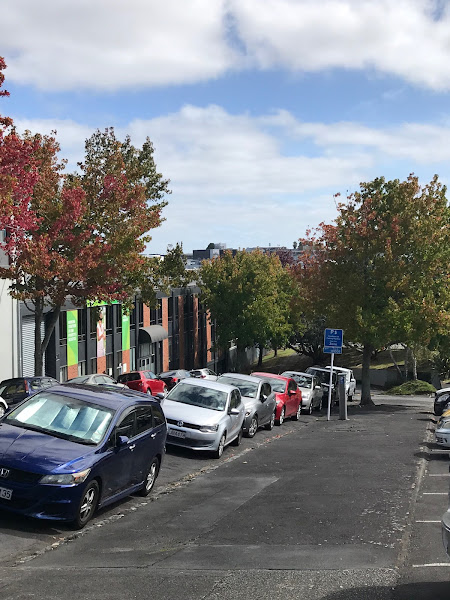 It may not be now much more than a place to park your car while you go shopping, but before they drove the motorway through, it was clearly a far more extensive boulevard. 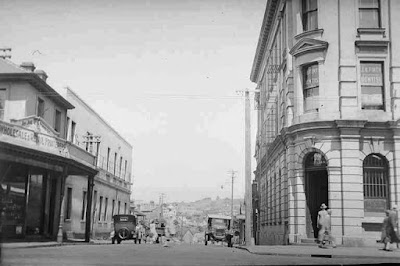 Here's an old picture taken facing down it, in the general direction of the sea. Lovecraft's story was written (and published) in the mid to late 1920s, and that, too, is the approximate date of this photograph.

Under the circumstances, any search for the possible location of First Mate Gustaf Johansen's cottage seems rather pointless. It probably stood on land long carved out to create Auckland's Spaghetti Junction.

However, in the spirit of the chain of strange coincidences chronicled in Lovecraft's story, I have to say that I was rather struck by some of the graffiti in the parking lot across from West Street, just below the louring presence of St. Benedict's Catholic Church. 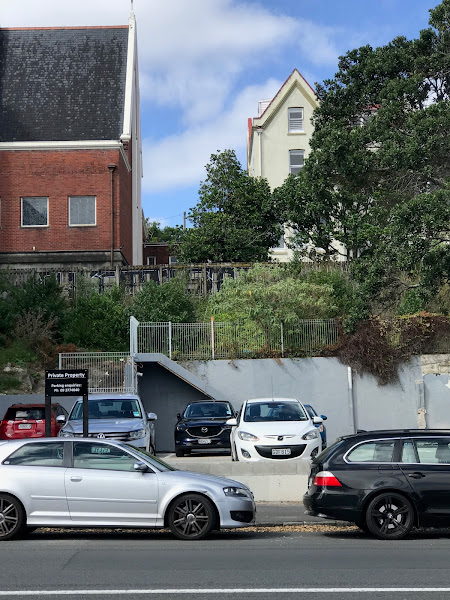 It's difficult to make out the inscription on the fence. Does it seem to you to read something like CTH[ulhu] SMI[les] [upon you]?

I suppose it's a bit strained of me to see it as an invitation to any potential votaries to join with the other worshippers at the local branch of the Esoteric Order of Dagon, but it does look somewhat suspiciously prominent, up there beside the brick-walled church. 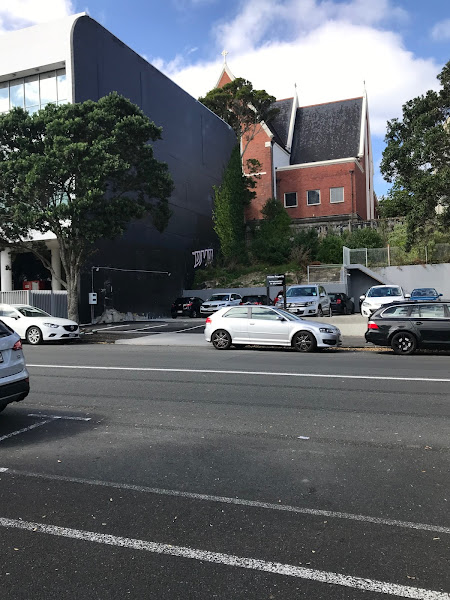 As for the writing on the parking building, it doesn't really seem to be in any easily recognisable script. It actually looks more like Hebrew than English: Hebrew, or possibly Amharic, or even some South-East-Asian language such as Lao or Thai. It's hard to guess what it might say. 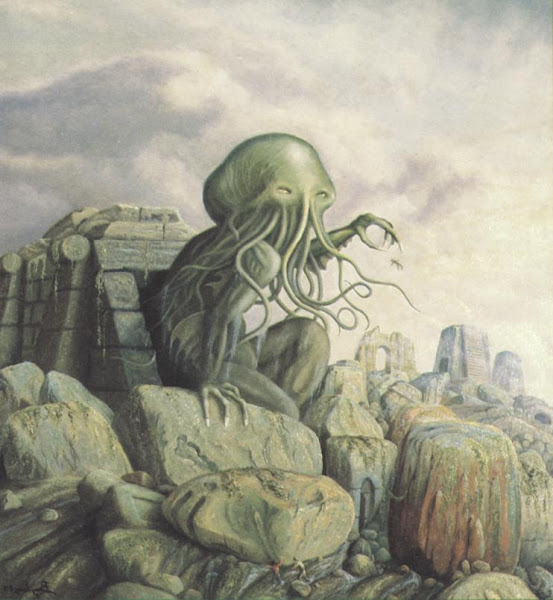 For the rest, although he never came here, H. P. Lovecraft's influence still seems to weigh as heavily on this one section of Central Auckland as does Chicago-born Edward Gorey's over the ghostly mansions of his own adoptive region, New England. 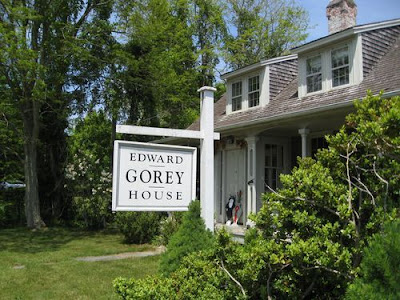