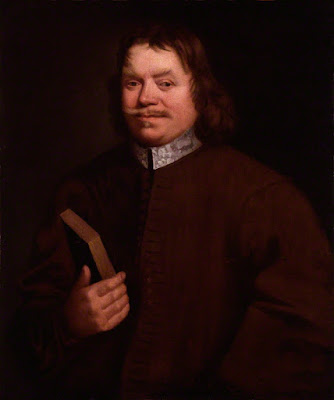 WHEN at the first I took my Pen in hand
Thus for to write; I did not understand
That I at all should make a little Book
In such a mode; Nay, I had undertook
To make another, which when almost done,
Before I was aware I this begun.

For quite some time after it came out, a number of informed judges were of the opinion that John Bunyan could not possibly have been the author of such works as The Pilgrim's Progress, written while he was in prison for daring to preach without a licence, though not published until 1678, six years after his release.

Their difficulty lay in conceiving how an ill-educated tinker could have conceived so compelling and vivid a work of the imagination: not to mention demonstrated so consummate a command of English prose. That kind of thing was allowable to established wits such as Dryden and Congreve, not to mention erudite eccentrics such as the regicide Milton, but surely not to a member of the working classes! 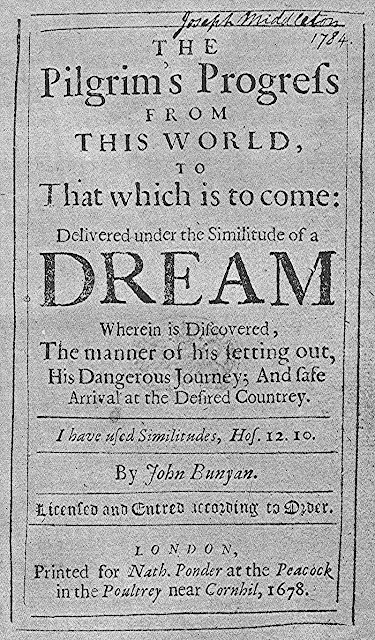 If you've never read it, rest assured that The Pilgrim's Progress is anything but a piece of dry-as-dust soul-searching. The story, with its fascinating echoes of the seventeenth century everyday of Bunyan's own experience, is absorbing enough, but the precise vernacular bite of the language he created to tell it lies behind virtually everything in the plain style which has been achieved since, from Swift to Cobbett to Orwell (not to mention, albeit at somewhat of a remove, Huckleberry Finn).

"The Author's Apology for His Book" is sometimes quoted as an example of the flatness of Bunyan's verse. I can assure you, though (as one who has tried it), that writing with such simplicity and directness as this is not an easy proposition: it is, in fact, much harder than the so-many-couplets-by-the-yard stuff, full of Classical allusions and pompous periphrases, which poets such as Dryden could more or less produce at will:

Neither did I but vacant seasons spend
In this my Scribble; nor did I intend
But to divert myself in doing this
From worser thoughts which make me do amiss.

What were these "worser thoughts"? The reason that Grace Abounding to the Chief of Sinners (1666), his spiritual autobiography, published while he was still in prison, is such a terrifying book to read is that it chronicles such excesses of paranoid self-scrutiny as to border, at times, on madness. There's one famous passage, in particular, where Bunyan is tempted to commit the sin against the Holy Ghost (what precisely this sin consists of has never been made quite clear, which is one reason it continues to terrify neurotic believers - such as myself as a child - to this day):

One day the temptation was hot upon me to try if I had faith by doing some miracle; which miracle was this, I must say to the puddles, Be dry, and to the dry places, Be you puddles.

This may sound a bit ridiculous, but it was anything but that to Bunyan. He persuaded himself that he had committed this sin, and was therefore damned to hell, and the sufferings he endured make grim (though also, at times, fascinating) reading. Eventually he escaped from this delusion. Prison was nothing beside it. By comparison, he endured twelve years of incarceration in Bedford Gaol with a light heart:

Thus I set Pen to Paper with delight,
And quickly had my thoughts in black and white.
For having now my Method by the end,
Still as I pull’d, it came; and so I penn’d
It down, until it came at last to be
For length and breadth the bigness which you see.

The idea of writing fiction was certainly an alien one to Bunyan. There were no English novels as yet, though prose tales had been told and published as far back as the Middle Ages. He therefore chose allegory as his vehicle.

Well, when I had thus put mine ends together,
I shew’d them others, that I might see whether
They would condemn them, or them justifie;
And some said, Let them live; some, Let them die;
Some said, John, print it; others said, Not so:
Some said, It might do good; others said, No.

Luckily he'd learnt by then to trust his own judgement - or, rather, God's:

At last I thought, Since you are thus divided,
I print it will, and so the case decided.

Admittedly there are one or two aspects of the work which cause a certain amount of consternation nowadays: the cave where the giants 'Pope' and 'Pagan' waylay and eat unwary travellers, for instance, but for the most part the descriptions of the corrupt magistrates of Vanity Fair and the prevarications of Mr. Worldly Wiseman still ring disconcertingly true.

There are many modern editions of his most famous book. I've listed the ones I myself own below. Funnily enough, the most interesting to read is the one which I've put second on the list, the nineteenth-century 'religious tracts' edition, which gives Biblical references and running commentary in little squares of text along the way. It has a real feel of the intensity with which this book was once read.

The Complete Works is a very strange book indeed, with a carved wooden cover and illustrations throughout. It's not terribly convenient to read, but is definitely a thing of beauty in itself: 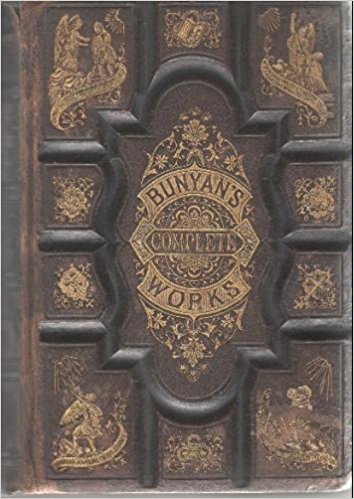 
I wrote this post at the suggestion of my good friend Richard Taylor, who seemed to feel that it might make a good follow-up to my posts on Spenser and Malory. I can't say that I regret having spent so much of my youth reading such ponderous tomes. Now, in my more frivolous middle age, I don't know that I'd have the energy to start on them from scratch (let alone such works as Piers Plowman or Beowulf, which I once had the application to plough through in the original).

Much of Bunyan's work is, however, extremely readable, and The Holy War and The Life and Death of Mr. Badman (great title!) are well worth pursuing if you take a liking to The Pilgrim's Progress (both are better than part two of that work, to be honest).

I suppose my main interest in him nowadays is as a predecessor to such literary non-conformists as William Blake and John Clare, however. There's a fascinating tradition there, which I write about in more detail in one of my posts on contemporary English poet Peter Reading. 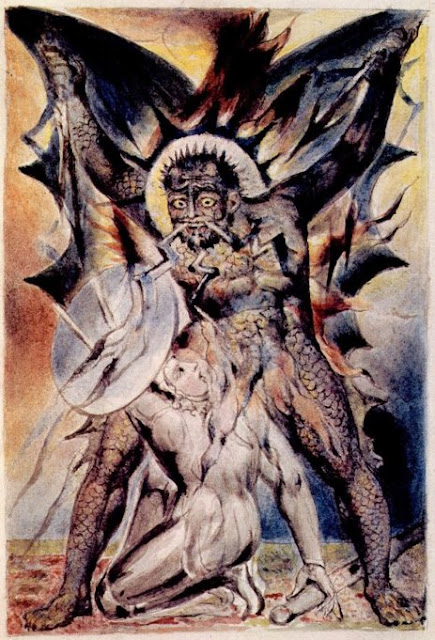