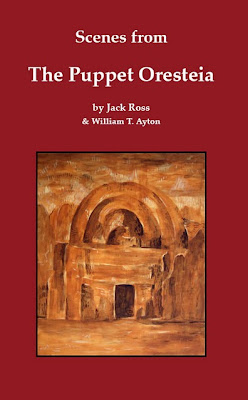 [Cover Design: William T. Ayton]
Sorry for any of you who've been disappointed by the lack of action on this blog over the past few weeks. I really have not been idle, but there are just so many things to keep up with mid-semester.

The most fun thing I've been doing lately, though, is collaborating with a US-based British artist, Bill Ayton, on an ilustrated version of my Puppet Oresteia play. 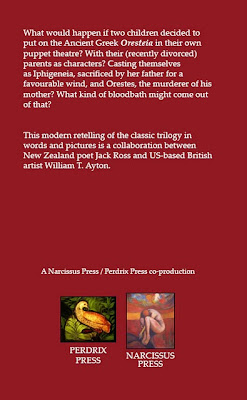 [back cover blurb]
The vicissitudes this text has been through since I first came up with the idea a couple of years ago - writings, rewritings, overhauls etc. - are probably not at all surprising for those of you who move in theatrical circles. After a while it became clear to me, though, that the only meaningful existence this text could ever have (for me, at any rate) was as a text - rather than as some kind of viable script for performance.

Bronwyn had made an entire puppet theatre, complete with backdrops and little puppets, in the meantime, though. Never mind. It still looks great in the photographs: 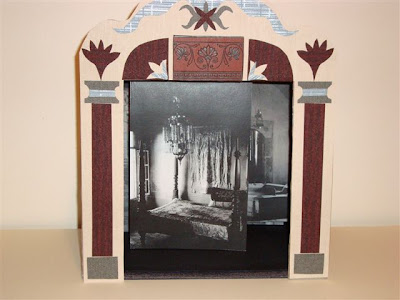 Scene One: a bedroom off the garden
[photograph: Bronwyn Lloyd]

Young Iphigenia (Gene) is explaining to her brother Orestes (Rusty) exactly why her wedding ceremomy is planned for the harbour at Aulis instead of at the palace at Mycenae as per usual. Is it because her betrothed, Achilles (aka Col. Killer), is anxious to get away to the Trojan war? Or are they cooking up something else for her down there ... 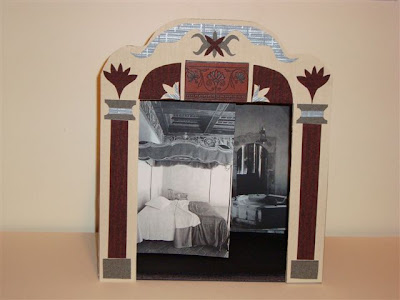 Clytemnestra (Mummy) has rather a hard time acccounting for just what she and her longtime boyfriend Aegisthus (Uncle Al) have been doing to Agamemnon (Daddy) and his new girlfriend Cassandra (Candy) when Rusty stumbles in on them unexpectedly. Is revenge really always a dish best eaten cold? 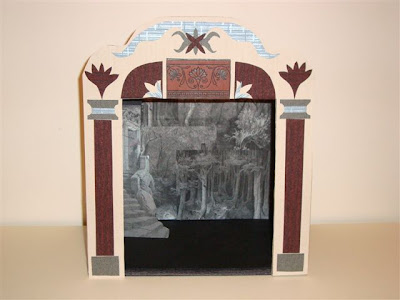 [Scene Three: in front of the shrine at Tauris]
[photograph: Bronwyn Lloyd]

Rusty's a junkie, haunted by demons, when he just happens to get shipwrecked by the very same shrine where Gene's been living all this time. But will she recognise him in time? The local custom is to sacrifice all strangers to the angry goddess, after all ...

It's not the most elegant of retellings, really. In fact it's as rough as guts in parts. But then that's kind of the point. The young girl whose puppet play this is is far more interested in her own family dynamics than she is in Ancient Greek tragedy ... [William T. Ayton: A Strange Nest]
The wonderful thing about working with Bill has been watching a whole new dimension of the text swim into being as his various ink illustrations morphed and evolved. There are now twenty-four of them, accompanying twenty-odd pages of text, so there can be no question of calling this mere "illustration" - on the contrary, this has been a true collaboration. [William T. Ayton: The Seashore at Tauris]
If you'd like to see what I mean, you'll have to go and check out the whole thing at lulu.com. This is my first venture into listing a book on that site, which has been another very interesting learning experience. I'm afraid that it's not yet on general sale, but I'll put up a link here as soon as it's available.

You can sample some of the choruses (all spoken by Cassandra / Candy) here.

[Update 20 May, 2011: I'm glad to be able to report that the book is now live on lulu: you can find it here, where it can be ordered for the pretty reasonable sum of $US 15 (plus postage).

Alternatively, you can order a copy from me for $NZ 20, and I'll even throw in the postage free (within New Zealand, that is) ...]

More even than Shakespeare etc I think Greek drama needs to be seen performed. But I enjoy reading it.

Off subject I finally started reading 'The Kingdom of Alt'

I am enjoying it so far. I really think that your 'The Purloined Letter' is brilliant!

Your mix of fact and fiction and 'paranoia' etc

[Almost certainly irrelevant, but as I recall Maps knew those French people and they came here, (I cant see Scott ever being in France but he may have been); I remember he argued with them that such a place as say Penrose, supposedly dull and "industrial" could be as beautiful as (say) Fiordland, that kind of thing. But these musings of mine are just details, not relevant to your 'story'... of course.]