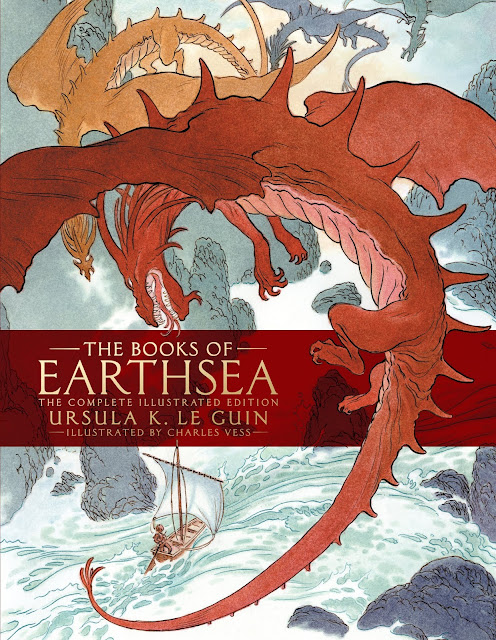 
It's hard to think of a time when I hadn't read Ursula Le Guin's work. I suppose I can date it fairly precisely if I think about it. A Wizard of Earthsea was lent to my sister Anne by her standard four teacher, a thin, dark-haired, intense young woman whose name escapes me now. And since Anne was only a year ahead of me at school, that would make it 1971, when the book (first published in 1968) was only a few years old. That means I've been reading Le Guin for roughly 47 years - amazing, really, when you think about it. 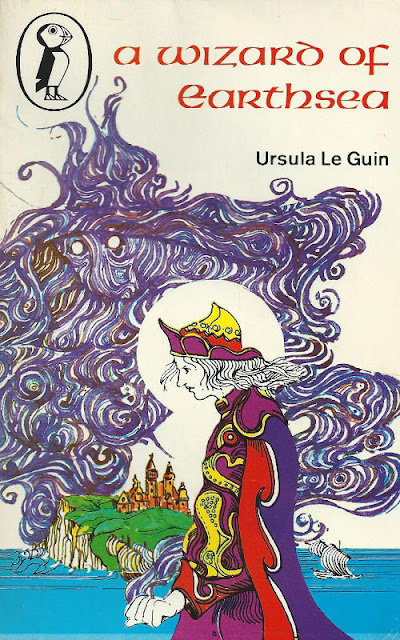 
Already a fan of such writers as Alan Garner, C. S. Lewis, and J. R. R. Tolkien, I could see that this was something quite different: different, but equally valid.

The Tombs of Atuan (1971), which we all read next, was a very different kettle of fish: more layered, subjective and intensely personal. I didn't like it as much as the more objective, epic voice of A Wizard of Earthsea, but (once again), even at that age, I could see it was just as valid. 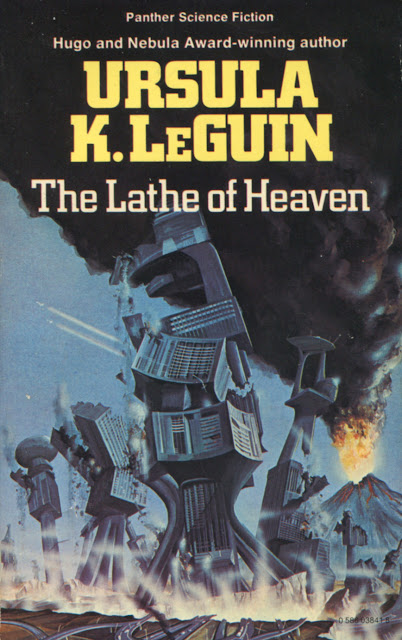 
The Farthest Shore (1972), when it came out the next year, seemed to combine the best features of the two styles.

By then I was hopelessly hooked, and - soon after - started my long, slow immersion in her early science fiction: first The Lathe of Heaven (which my father had in a scruffy little paperback edition: still possibly my favourite among all of her books), then the far more difficult Left Hand of Darkness - which still terrifies as much as it enthuses me - and finally her wonderful 'ambiguous Utopia', The Dispossessed. 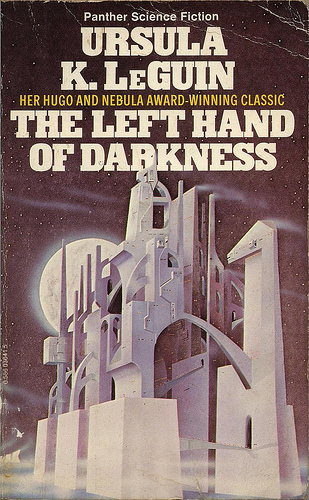 
After those early books came a long period of disappointment for me. Her early work seemed to me to constitute a touchstone of excellence in speculative fiction that only the greatest could hope to equal. But what was I to make of The Eye of the Heron or Buffalo Gals?

It seemed to me as if (to quote C. S. Lewis's witty denunciation of H. G. Wells) she "had sold her birthright for a pot of message." The wonderfully subtle and nuanced gender relations in books such as The Left Hand of Darkness or the original Earthsea Trilogy had been traded in for the strident excesses of militant feminism. 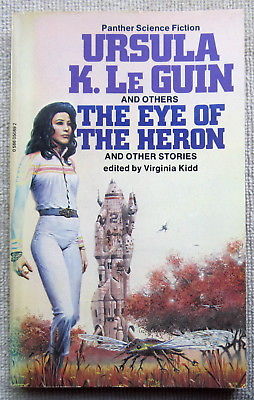 
The thing about addicts, though, is that it's very hard for them to break free from their addictions. By now the habit was formed, and I dutifully read book after book of hers, hoping against hope for a return to form. This even after she'd dared to politicise the pristine fantasy world of her own Earthsea with the bitter pill of Tehanu (1990). 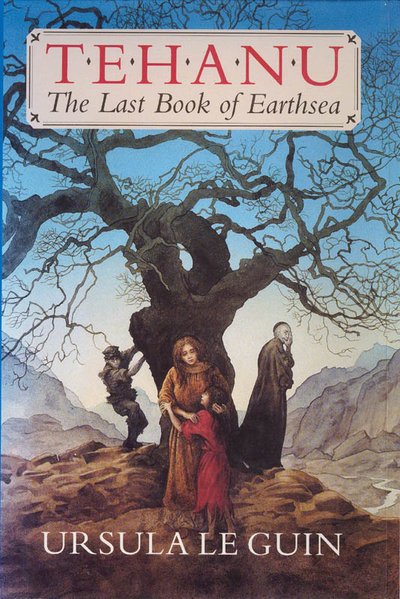 
The years came and went, the books piled up: particularly the collections of short stories, a form which has always seemed particularly congenial to her. Eventually even I, the stupid mule, began to get it, began to read back with a bit more insight, began to see how my adolescent judgements of her work simply betokened a lack of political maturity.

Now even those novels and stories of her middle period seem to me clearly integrated into her work as a whole - it makes me blush to realise how blindly stuck in my ways I must have been to think otherwise: to fail (for instance) to see the merits of such a wonderful story as 'Buffalo Gals, Won't You Come Out Tonight.' 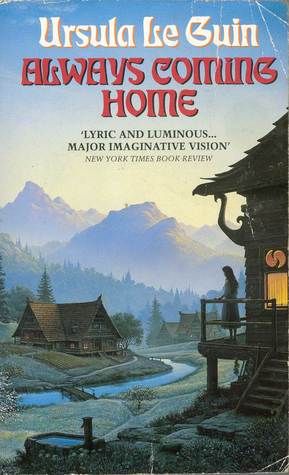 
Interestingly enough, I didn't share the adverse reaction to Always Coming Home when it first came out - after, that is, I'd learned that it had to be read straight through: songs, folklore, ethnologies, etymologies and all, if one was to have any hope of understanding the narrative all those things frame. Do they exist for the story, or does the story exist for them? It's an interesting question, but one - by its very nature - which remains unanswerable. 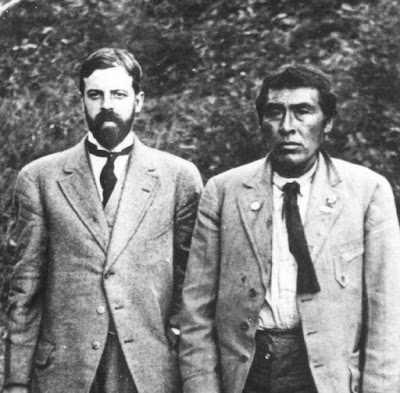 
Always Coming Home remains her most ambitious novel: the one which really betrays how much she was her father's daughter: Alfred L. Kroeber (1876-1960), one of the most influential ethnologists who ever lived, famous (or infamous, depending on how you read it) as one of the protagonists of the so-called Ishi saga, the story of which was eventually written as Ishi in Two Worlds (1961) by Theodora Kroeber, Ursula's mother - who never met Ishi himself - after her husband's death. 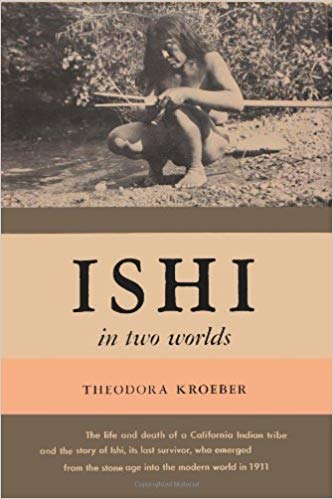 
Always Coming Home, for those of you who haven't read it, is a strange combination of a fantasy novel set in the near (or far) future, and an ethnography of a people called the Kesh, inhabitants of what is now Northern California. It includes accounts of their religious rituals, castes and guilds, stories and poems, their diet, and virtually the whole of their life-style from birth to death. It’s a hugely ambitious text, involving the creation of a whole imaginary future people, but – of course – also aspires to be a readable story. 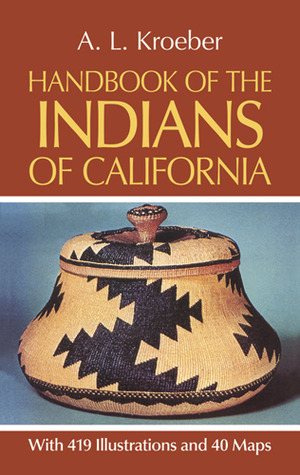 Alfred L. Kroeber: Handbook of the Indians of California (1925)


It’s always seemed obvious to me that it was, at least in part, inspired by her father's work: his Handbook of the Indians of California, or one of his many, many other works on Native American culture and folklore, such as Indian Myths of South Central California (1907) or the posthumously published Yurok Myths (1976).

Her mother's influence is just as strong, though: perhaps a unique case of a novelist daughter influenced by her linguist and anthropologist father and her biographer mother - who followed up her first, more scholarly book Ishi in Two Worlds with a more popular, lightly fictionalized version, Ishi: Last of His Tribe - in creating a work which can really only be described as ethno-speculative-fiction. 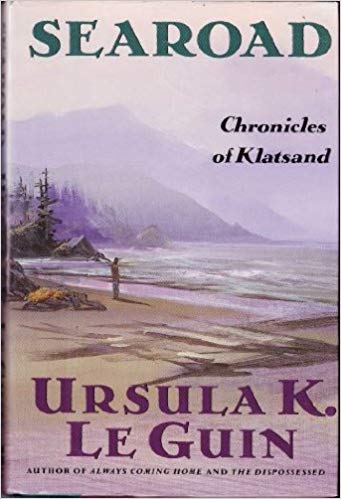 
Whether or not you agree with that reading, it's clear that all three of these writers, mother, father and daughter do have in common a deep kinship with the region they live in: the North-West Coast of the United States.

Perhaps her most potent expression of this feeling came in the book Searoad, an innovative book of linked short stories which combine to create the sense of a single place: Klatsand, a small town on the edge of the Pacific Ocean. Given this unity of conception, I've classed it as a novel in my bibliography of her work below, but actually it would fit just as well in the list of books of short stories.

That's quite characteristic of Le Guin, actually. She defies simple classification into genres. Her potted biography on Amazon.com reads as follows:

Given that they go on to say: "Her recent publications include the novel Lavinia [2008], Words Are My Matter, an essay collection [2016], and Finding My Elegy, New and Selected Poems [2012]," one can't help wondering how up-to-date these statistics are actually meant to be.

Myself, I count 13 'adult' novels alongside 9 for YA readers, which I would say adds up to 22. Given the doubts I've already signalled about Searoad, however, as well as the fact that The Word for World is Forest (1977) and Very Far Away from Anywhere Else (1976) are really more novella than novel-length, albeit published as stand-alone volumes, one could certainly argue for any figure around the 20s.

11 volumes of short stories does sound correct to me (including, as it should, her 2001 book Tales from Earthsea). The four collections of essays is hopelessly out-of-date, however. I count at least seven major volumes of these - although one could easily expand that to 8 if one included the British collection Dreams Must Explain Themselves (or, for that matter, 9, with the addition of the posthumous volume of Conversations on Writing with David Naimon).

The 12 books for children have risen to 13, the 6 books of poetry to 12, but the 4 of translation still seems accurate. By my count, then, 72 books (ignoring - mind you - a number of the chapbooks listed on her Wikipedia bibliography page), plus at least 10 volumes of collected works, ranging from the various editions of the Earthsea series to the four-volume Library of America collection - now (in 2020) projected to grow to an eventual 8).

It's an impressive total. It's not so much how many there are as how many masterpieces there are among them, though. She really was one of a kind. 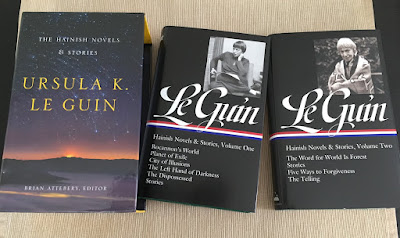 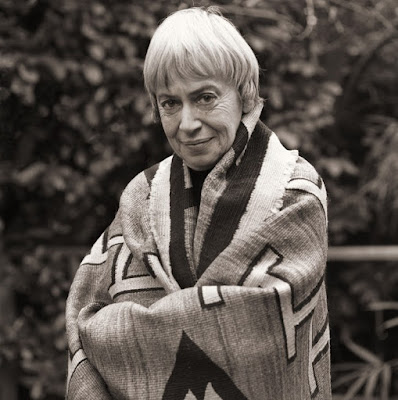 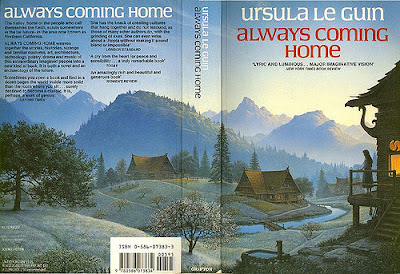 Hi there I am so thrilled I found your weblog, I really found you
by mistake, while I was looking on Google for something else, Nonetheless I am here
now and would just like to say kudos for a remarkable post and a all round exciting blog (I also love the theme/design), I don’t have time to
look over it all at the moment but I have saved it and also added your RSS feeds, so when I have time I will be back to read a great
deal more, Please do keep up the great work.