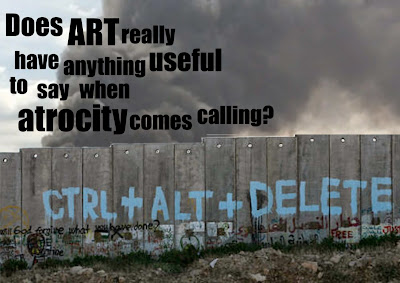 Next week I'm supposed to be leading a discussion with a group of students on this rather uncomfortably weighty topic. I find that what thoughts I do have on the subject all seem to have been expressed already - rather better - by W. H. Auden, possibly my favourite English-language poet of all time (invidious though it would be to have to make such a choice).

There is, for a start, his early poem "Missing" [From scars where kestrels hover] (1929), about those "Fighters for no-one's sake / Who died beyond the border":


Heroes are buried who
Did not believe in death,
And bravery is now
Not in the dying breath
But resisting the temptations
To skyline operations.

The poem concludes with the magnificent lines:


"Leave for Cape Wrath to-night,"
And the host after waiting
Must quench the lamps and pass
Alive into the house.

That image of the "host" passing "alive into the house" is very much Auden's idea of the thirties hero: someone who can resist all the "temptations" to the prestige of "skyline operations" but instead be content to remain alive as a witness.

It's a vision of the artist as ordinary citizen ("The poet is Mr. Everyman. He goes to work every day on the tram," as he told the young Stephen Spender at much the same time (as recorded in the latter's 1953 autobiography World Within World).

It recalls Milton's sonnet "On His Blindness" - "They also serve who only stand and wait" - but goes beyond that to reject the whole idea of the "test": the supreme ordeal (like the trenches of 1914-18, missed by a whisker by his whole generation) which proves you to be a man.


But can the artist go beyond this role of witness and observer? Auden's poem "Spain 1937" would seem to imply as much:


The stars are dead. The animals will not look.
We are left alone with our day, and the time is short, and
History to the defeated
May say Alas but cannot help nor pardon.

Here what is stressed is the need for action:


"What's your proposal? To build the just city? I will.
I agree. Or is it the suicide pact, the romantic
Death? Very well, I accept, for
I am your choice, your decision. Yes, I am Spain."

Many have heard it on remote peninsulas,
On sleepy plains, in the aberrant fishermen's islands
Or the corrupt heart of the city.
Have heard and migrated like gulls or the seeds of a flower.

They clung like burrs to the long expresses that lurch
Through the unjust lands, through the night, through the alpine tunnel;
They floated over the oceans;
They walked the passes. All presented their lives.

Spain is now symbolic of the choice, an invitation to the young of international brigades, who "clung like burrs to the long expresses that lurch / Through the unjust lands."

Auden subsequently chose to repudiate this poem. He said of it, in fact, in the preface to Collected Shorter Poems (1966), of the lines "History to the defeated / May say alas but cannot help nor pardon", that "to say this is to equate goodness with success":


It would have been bad enough if I had ever held this wicked doctrine, but that I should have stated it simply because it sounded to me rhetorically effective is quite inexcusable.

I don't know if he quite understood his own poem, though - or perhaps he feigned to misunderstand it in order to make a point. As I read it, at any rate, the poem is simply stating a fact about history: "Acts of injustice done / Between the rising and the setting sun / In history lie like bones, each one", as he remarked on another occasion. It isn't arguing that it is necessary to win in order to be right, but simply that those who die defeated (as the Spanish loyalists did, so many of them) cannot be helped by subsequent apologists or revisionists.

I can see that this is indeed an unpalatable "doctrine" for the later, Christian, Auden, but for the earlier Leftist, to whom History was itself a kind of deity, it added a necessary dose of cold reason.

This period culminates in Auden's "September 1, 1939," another of the poems excluded - much to his admirers' surprise - from Collected Shorter Poems:


I sit in one of the dives
On Fifty-second Street
Uncertain and afraid
As the clever hopes expire
Of a low dishonest decade:
Waves of anger and fear
Circulate over the bright
And darkened lands of the earth,
Obsessing our private lives;
The unmentionable odour of death
Offends the September night.

As he said much later, "All the attitudes I struck in the 1930s didn't save a single Jew." That, presumably, is one of the "clever hopes" expiring with the coming of war - along, perhaps, with the rest of the rabble-rousing rhetoric of "Spain 1937"?

The poem goes on with a kind of inexorable, nursery rhyme logic, to remind us that:


I and the public know
What all schoolchildren learn,
Those to whom evil is done
Do evil in return.

Because, in the final analysis:


The windiest militant trash
Important Persons shout
Is not so crude as our wish:
What mad Nijinsky wrote
About Diaghilev
Is true of the normal heart;
For the error bred in the bone
Of each woman and each man
Craves what it cannot have,
Not universal love
But to be loved alone.

The poem ends with an impassioned cri de coeur:


All I have is a voice
To undo the folded lie,
The romantic lie in the brain
Of the sensual man-in-the-street
And the lie of Authority
Whose buildings grope the sky:
There is no such thing as the State
And no one exists alone;
Hunger allows no choice
To the citizen or the police;
We must love one another or die.

It's that last line that caused all the trouble. It was much praised and much quoted at the time, as it seemed to sum up the whole business - why we had to keep going, keep struggling, keep trying to "love one another." Auden complained later (somewhat pedantically, one might say) that we would die whether we loved one another or not, and he therefore revised the line to read "We must love one another and die" in subsequent collections. Even this was not enough, though, so later still the whole poem was excised.

I suppose he had a point. It is a nice, resonant line, but it doesn't really make sense when you think about it. It seems a shame to scrap the whole poem for that, though. There's an earlier stanza which runs through my head every time I think about the "compassion fatigue" so endemic to our times:


Faces along the bar
Cling to their average day:
The lights must never go out,
The music must always play,
All the conventions conspire
To make this fort assume
The furniture of home;
Lest we should see where we are,
Lost in a haunted wood,
Children afraid of the night
Who have never been happy or good.

"Lost in a haunted wood / Children afraid of the night / Who have never been happy or good" - that's us all right.

I'll conclude with some lines from another one of those magisterial poems from the end of the 1930s, elegies for a dying age, poems that speak to us now with an ever more urgent voice - "In Memory of W. B. Yeats":


You were silly like us; your gift survived it all:
The parish of rich women, physical decay,
Yourself. Mad Ireland hurt you into poetry.
Now Ireland has her madness and her weather still,
For poetry makes nothing happen: it survives
In the valley of its making where executives
Would never want to tamper, flows on south
From ranches of isolation and the busy griefs,
Raw towns that we believe and die in; it survives,
A way of happening, a mouth.

It's interesting how often this poem is - not so much misquoted, as misunderstood. People recall that half-line "poetry makes nothing happen," and see that as an expression of quietism or defeatism in the face of the (so-called) "real world" of executives and their ilk. But if you read on, that's not at all the end of the matter. On the contrary, the "poetry" that Auden imagines so triumphantly in this poem "survives, / A way of happening, a mouth." Poetry may make nothing happen, but that's because it is, in itself, a way of happening - in the valley of its making, those "Raw towns that we believe and die in," it has its own healing power to offer.

The poem's splendidly resonant conclusion therefore expands on these earlier lines, rather than contradicting them:


Follow, poet, follow right
To the bottom of the night,
With your unconstraining voice
Still persuade us to rejoice.

With the farming of a verse
Make a vineyard of the curse,
Sing of human unsuccess
In a rapture of distress.

In the deserts of the heart
Let the healing fountains start,
In the prison of his days
Teach the free man how to praise.

Auden won't let us get away with the excuse that poetry is impotent to affect our lives: "With your unconstraining voice / Still persuade us to rejoice" is the task of every poet, in his view.

It's not that he's naive about the difficulty of the task: "In the prison of his days / Teach the free man how to praise" was written by one who foresaw the perils of consumerist vacuity and the "airtight cages" of poverty which could be established so easily alongside the palatial dwellings of those of us who call ourselves "free." 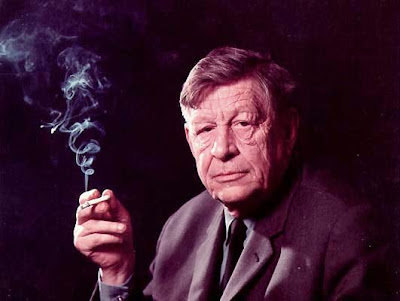 
Did Auden ever resolve these balances? No, of course not. But the various positions he occupied at different times are well worth reconsidering now, when we face a world which more and more resembles that of the 1930s. I think he knew we would, and that's why he outlined the task of poetry (and art in general) with such precision and care:


I, decent with the seasons, move
Different or with a different love

as he said in "The Letter," the first poem preserved in his final collected edition. "Let your last thinks be thanks," says one of the last. 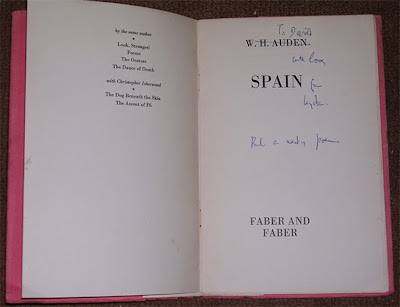 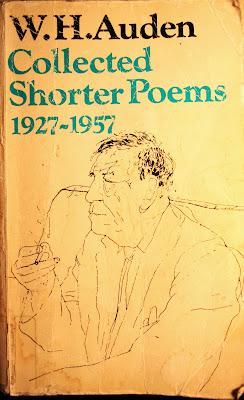 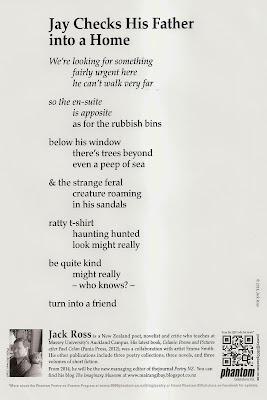 
Sorry for the long delays between posts on this site. I guess it's not much of an excuse, but I have been rather busy setting up a Poetry NZ blog for "views, reviews, interviews, and other news" about the magazine.

In the meantime, though, I did get quite a kick from seeing my very first poetry poster, from the Phantom Billstickers, "New Zealand's largest and finest street poster and street media company."

The plan is that they're going to produce a poster for each of the readers at "Poetry Central," the Auckland Central Library celebration of Poetry Day (which falls on Friday 22nd August - 5.30 for 6 pm - this year), and plaster them up all around the event. The above is my contribution to the festivities. 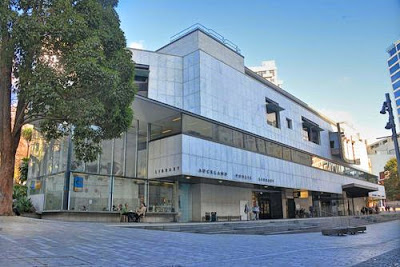 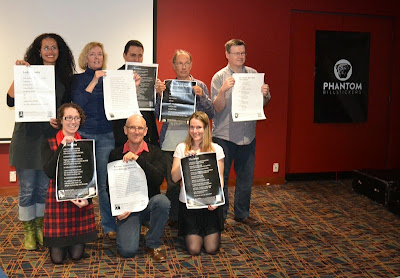 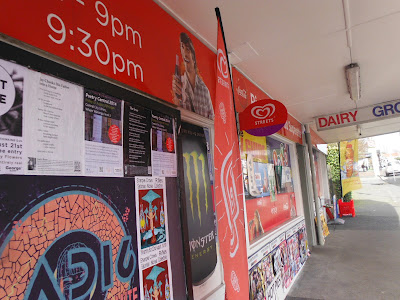 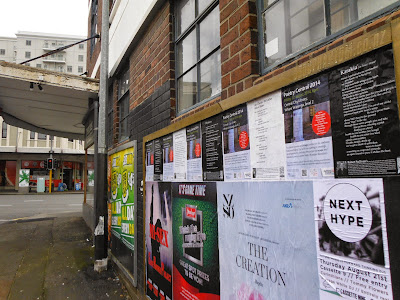