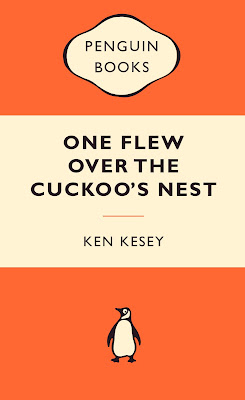 The publicity gurus at Massey have this thing where they try and get us to take over a high school for the day, with appropriate members of staff teaching all of the normal classes in some kind of special souped-up "university" way. As you'll gather from my tone, I have certain reservations about this idea. Are we really that much cooler and more interesting than their usual teachers? It seems unlikely.

Anyway, the latest target is Mahurangi College. We're going to occupy it next Monday, 27th August, and I (for my sins) have to teach one of the year 13 English classes - what I'm afraid I still think of as "seventh form." I'm quite terrified. I had to go to a High School to present prizes a few years ago, and the moment I arrived the fear came back - I felt at any moment I was going to be hauled off for disciplining by one of those eagle-eyed Heads and Deputy Heads keeping an alert eye out for trouble ...

The thing that does interest me about this event, though, is the subject of the lesson: Ken Kesey's novel One Flew Over the Cuckoo's Nest. I first read the book myself when I was in the sixth form at Rangitoto College, in - it must have been - 1978 (I remember one of the older, staider teachers fulminating on about all the hippie nonsense they were getting kids to read these days - instead of sticking to good ol' Dickens and Thomas Hardy). That was more than thirty years ago.

But there it still is, in the curriculum, Chief Broom, Randle McMurphy, the Combine and all ... When you think that the book was already a bit of a period piece then, at the end of the seventies, what does it sound like now, to these teenagers they're getting to read it? I was born in 1962, the year of the book's publication. Not only were these kids not born or thought of then, but their parents probably weren't either - it actually comes from their grandparents' generation. 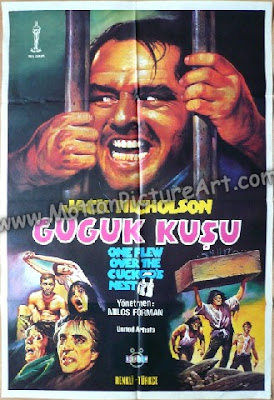 Anyway, it didn't seem safe to rely on those thirty-year-old memories - nor my recollections of the (then current) Jack Nicholson film, which was screened for us in the school video room, and which I suppose I must have watched on video at least once since. So I have been rereading the book. Not only that, I've also been rereading Tom Wolfe's The Electric Kool-Aid Acid Test (1968), an account of Kesey's subsequent adventures with LSD, the magic bus, and his group of Merry Pranksters. 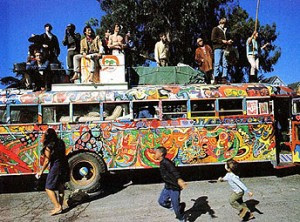 What strikes me most about One Flew Over the Cuckoo's Nest is just how good it is. Kesey definitely had a lot of talent, and his narrative barrels on like an express train. Nor do the themes of the book (presumably set in 1960, as reference is made to "voting for Eisenhower" as an especially loony thing to do, in the early pages of the book - crazy because it was his vice-president, Richard Nixon, who was actually running for president that year?) seem particularly dated. The idea of the "Combine", the machine that runs the whole country, keeping everyone in line, is still right on the button.

There's a certain inescapable romanticism about the whole thing, of course: the Chief's escape at the end, bearing McMurphy's soul with him, is a bit too good to be true. But then, it was never supposed to be a realist text, an expose of the mental health system (though there are elements of that within it). It's more of a blueprint for the real-life adventures and escapades that Kesey would himself enact a few years later.

And, as such, it's quite prophetic. Just like McMurphy, Kesey was eventually busted and flung into jail, and after his release, things were never quite the same. Where he and his pranksters had pioneered the Hessean Journey to the East, and were, at the time of their dissolution, trying to find a way to go "beyond acid," it was the bland suits of the music industry who reaped the cash rewards. Where he and his pals dreamed of a great spiritual awakening, the reality came down mostly to a string of squalid communes springing up on waste ground all over the world.

It might have been better, in some ways, if Kesey had achieved the martyrdom of his fictional hero instead of turning into a reclusive old has-been on a farm in the back of beyond. He did go on to publish a couple more books, but none of them had the power and influence of his first two - Sometimes a Great Notion (1964) still resolutely refuses to go away or go out of print, just like its predecessor.

Jack Kerouac grew old and sad, too - drinking himself to death in a scungy old cellar. But there the analogy ends. Kesey was always more focussed and productive than Kerouac: his pranks worked, his prose made better sense. He died in 2001, but it's hard to see his story as over yet. His books keep on selling, keep on being read, because he genuinely had something to say: the fact that he lapsed into being a mere man of letters gives you some clue of just how high the expectations for him had become.

If he was a John the Baptist rather than a Messiah, preaching the coming of something bigger than himself, then that can hardly be seen as a reproach. He may have got some of the details spectacularly wrong (in particular the timetable), but it's unfair to type him as a lost leader, a failed hope. Nobody since has succeeded in picking up that baton, but I guess we're all still waiting for someone to try. 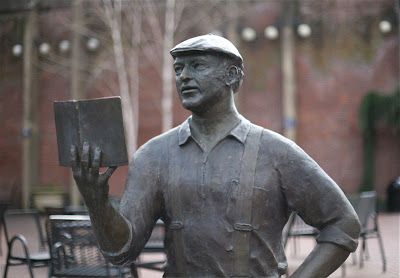 These comments sound like a great lesson, Jack. Why not ask the students if they think the book is relevant to them today? What do they think of the notion of the Combine?

My problem on these occasions is that I tend to talk too much rather than opening up the topic to discussion. Those sound like great questions to get the ball rolling. I appreciate it.