A Day out with David Howard 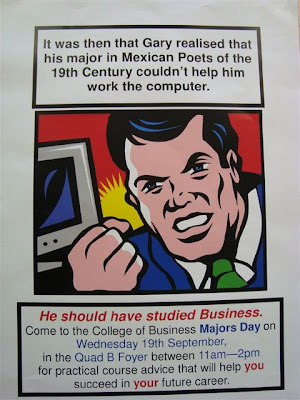 
Funnily enough, last weekend I was teaching a poetry course in the very room this poster adorned - or should I say "infested." It was, admittedly, a session on two contemporary poets: a New Zealander and a West Indian, but the cap still seems to fit, somehow.

After all, who else around here can be held responsible for a Doctoral thesis entitled "An Elusive Identity: Versions of South America in English Literature from Aphra Behn to the Present Day" (University of Edinburgh, 1990)? Written, incidentally, on a large institutional mainframe computer - which did take a bit of mastering, but which has certainly prepared me pretty well for all the idle tapping around I've been doing on them ever since.

I guess the only Mexican poets I looked at in any depth in that epoch-making masterwork were the sublime Renaissance genius Sor Juana Inés de la Cruz and (closer to the present day) Nobel Prize-winner Octavio Paz, together with certain of his contemporaries - I don't actually recall any nineteenth-century Mexican poets worthy of being discussed alongside the Argentine José Hernández (author of the epic Gaucho Martín Fierro). I could well be wrong, though.

Anyway, to hell with those dweebs! They're just jealous. Let them go back to their haggling and huckstering in the precincts of the temple. It gave me great pleasure to shake the dust of the place off my feet, and instead head north for a day-long road trip with my good friend and fellow poetry-obsessive David Howard, up here for the Going West Festival. 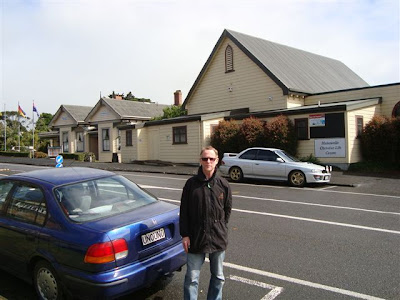 I've known David for many years. We first met in Auckland in the late nineties, when he was making a living as an entrepreneurial pyrotechnician and events-organiser. He could never completely submerge the writer in him, though. The books have continued to appear in steady succession since the mid 80s:


After he left Auckland around the turn of the millennium we stayed in touch, even after he moved to the frigid paddocks of Purakanui, north of Dunedin. Financial necessity forced him to visit Auckland from time to time to organise fireworks shows (his principal source of income), and most times we'd end up heading out into the wilds on various crazed excursions to the heart of the New Zealand dream ...

A surprising number of those drives ended up in Warkworth, mostly involving a trip to the Unicorn Bookshop, then run by the late lamented Richard Wasley. I wrote an obituary for Richard here, but since then his beautiful Unicorn Bookshop has reopened under new ownership. They'd been enlightened enough to offer me a $20 book token in their monthly prize draw, thus offering another reason for turning our footsteps in that direction. 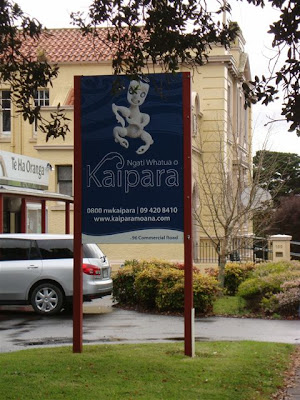 [Welcome to the Kaipara!] 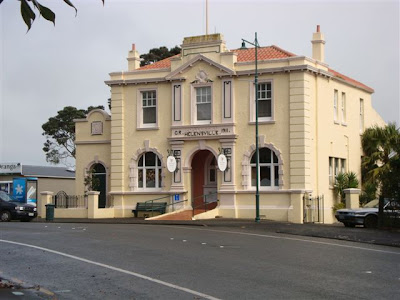 [Still a bit of colonial pizazz left in the old town] 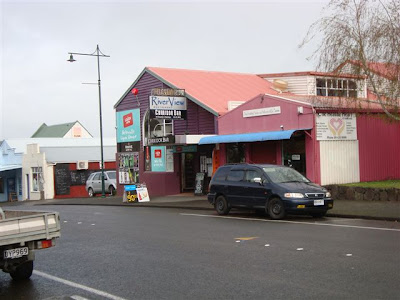 Scary, isn't it? If I'd been more assiduous, I would have got some shots of the bizarre old cinema complex at the bottom of the hill as you drive out of town, which is now home to a huge collection of art and antiques, only occasionally open to the public - mostly on weekends. This time we had to content ourselves with staring through the windows and speculating about the effects of damp on pre-loved paperbacks ...

The whole point of these road trips is to barrel along in the car in no particular direction, with no clear destination in mind, shooting the breeze about life, books, poetry, and the doings of mutual friends and acquaintances. We originally met through poet-priest the Rev. Leicester Kyle, long before his departure for the Coast and a date with ecological destiny. We're also the joint executors of his literary estate, so there are generally a few things to sort out about that.

These are not particularly high-pressure conversations. I can't recall us ever having a serious falling out in the fifteen or so years of our friendship. I find a lot of his work incomprehensible, and much of mine seems to him (I suspect) perversely raw and underwritten. Who cares? We get on with the job, always with a certain respect for each other's judgement and dedication to the task in hand. 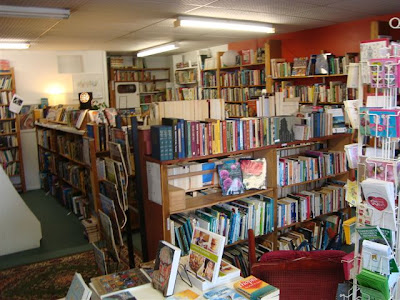 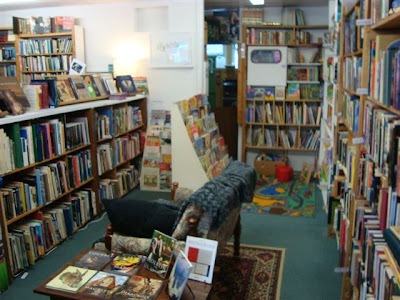 And yes, I asked permission before taking these shots. We did spend a fair amount of money on various obscure books of poetry in there, so I guess Tania thought it would be churlish to refuse. She insisted on staying out of the photo, though. Which is a shame, because it's a beautiful little shop she's building there. Much of Richard's old stock still remains, but her own taste for children's books is beginning to make real inroads.

And so the day meandered on. We'd started from Glen Eden, driven north along the coast, via Helensville, then crossed over to Warkworth. By now it was time to hurry David off to the airport - which took a tiny bit longer than anticipated, but still got us there with time for him to check in.

As he left, he gave me a copy of this beautiful little book of poems by Lithuanian poet Tomas Venclova (David does love those obscure Eastern-European writers) ... so I'll close with some lines from one of his sparse, spare, fascinatingly deadpan poems, "In the Lake Region" (trans. Ellen Hinsey):

The past does not enlighten us — but still, it attempts
to say something. Perhaps the crow knows more about us
and about history's dirt than we do ourselves.
Of what does she want to remind us? Of the black photos,
the black headphones,
of radio operators, black signatures under documents,
of the unarmed with their frozen pupils — of the prisoner's
boot or the trunk
of the refugee? Probably not. We will remember this anyway,
though it won't make us any wiser. The bird signifies
only stoicism
and patience. If you ask for them, your request
will be granted.

If you want to check out some of David's own poetry, why not go to his author page on the nzepc? 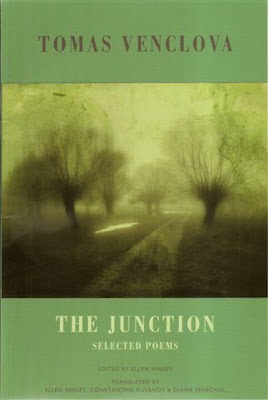 That is an amazing excerpt. You can imagine all the black bits of junk left on the ground next to the corpse of an indigent drunk after an East-European snow melt. (Also, it has proper amounts of crow appreciation).

Next time you and David should do a film: "Harold & Kumar Go to Warkworth: Fast Food. High Literature."

As for the poster, I detect the hand of an evil nemesis. The coincidences are too perfect. Does Stephen King know where you work?

Yes, you're quite right. It's too pat to be accidental ("Once is chance, twice is happenstance, three times is enemy action" as Goldfinger once remarked ...)

It's possibly stretching it a little to suspect the hand of the monarch of darkness himself -- I do suspect that Dr Andrew Chrystall might bave been involved, though -- he's always asking my opinion of his latest theory on schlock horror films and suchlike.

Check him out at:
http://www.massey.ac.nz/massey/learning/departments/school-communication-journalism-marketing/staff/staff-profile-andrew-chrystall.cfm
Is that a guilty look? I think so ...

Yes, that look is positively villainous. Canadian...likes surfing... There is your culprit.

Sometimes I wish I were one of those unworldly people to whom the term "Harold and Kumar" would mean nothing. And I can't help feeling that I'm going to end up being Kumar in this scenario ... even if there's no White Castle in Warkworth. That second movie was a bit throwaway, though - the one where they ended up in Guantanamo Bay ...

Have you seen Game of Thrones?
Have you read A Song of Ice and Fire?

(We haven't, incidentally, but our nephew recommended it to John, who thinks it sounds Jack Vance-y)

Funny you should ask, actually -- I just spent pretty much the whole of mid-semester break reading A Song of Ice and Fire when I should have been doing any number of other things ... It was the TV series we watched first, though, and both Bronwyn and I loved it.

It's appallingly, egregiously violent - so be warned - but the characters are interesting and sympathetic, and the acting and production absolutely superb.

I wrote a little thing about it on my bibliography blog, on the new "Acquisitions" page [http://madbookcollection.blogspot.co.nz/2010/05/recent-acquisitions.html#_ftn1], but there's certainly a lot more to be said.

I suspect I may wait till we get a chance to see series 2, which is still screening at present. George Martin is certainly no prose stylist, unlike Jack Vance, but he's a very competent writer who has an epic and uncompromising vision: he also avoids most of the more horrible cliches of the Tolkien imitators - politics interest him far more than vague eschatological uplift. It takes ages for anything to happen, though - in the books, at any rate. The TV series is faster moving.

The Queen of the Dothraki is pretty damned cute. In fact I feel you'd have to be more-or-less dead to think otherwise. Her horse-lord husband gave rise to a few "Good Lord!" exclamations from Bronwyn, too, so I think it's fair to say that the series has something for everyone ...

oops! I think I just posted a comment while the computer was signed into John's account. Just for the record, John is not, repeat not excited by muscled horse-lords in leather garb.

I'm disappointed that John Dolan is 'not excited by muscled horse-lords in leather garb' as it can nw be revealed that the trip Jack reported upon was for scouting locations for my new TV show, 'Howard in Helensville': this is a dystopian drama set in the last days of the Clark government rather than the future. It includes a dream sequence where I don leather, mount my stallion, and charge the evil lord Don Brash.

Funnily enough, no comments detailing excitement at horse-lords actually came through at this end, so perhaps the machine deleted them spontaneously.

As for the comments by 'anonymous', which claim to emanate from that sheltered pastoral scholar David Howard, permit me to express a certain scepticism. In any case, Helensville is John Key country -- not enough kiwi-fruit plantations to interest Don Brash ...

Hmmm...I did buy this computer from the Kingdom, so it's just possible my computer is censoring irreligious comments.

Anyhow, in the process of thanking you for the skinny on Game of Thrones (thanks!)I was merely offering an appreciative comment on the 3rd picture down here:

David, I beg you to overlook JD's idiosyncratic tastes and JR's ungenerous scepticism.'Howard in Helensville' is an inspiring dream, and one that you really owe it to NZ's viewing public to realize. However, might I suggest that you don a kilt in honour of Robbie Burns?