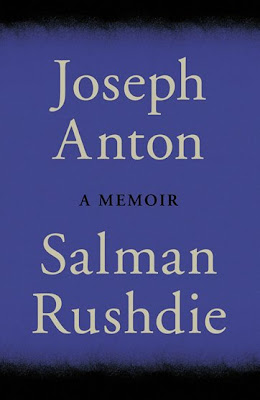 
Last Tuesday Bronwyn and I skived off work in the afternoon to go to the pictures. We hadn't been for weeks, and that's always the best time to go: it's cheaper, and the cinemas are mostly empty.

Afterwards she had some stuff she wanted to buy in Whitcoulls, so we popped in there for a bit. Into a bookshop. Always dangerous.

Up on the shelves, at a special "school holidays price" of five dollars off, was Salman Rushdie's memoir Joseph Anton. I looked at it, sniffed it (terribly ugly cover: waxy, showing every fingerprint and dint), walked away, came back, looked at it again, succumbed, bought it.

Since then it's occupied virtually every waking hour. I've been gulping it down like crack cocaine. Is it a good book? Who can say? It's certainly very readable ...

It put me in mind of another bookshop visit, in early 1989. I was living in Edinburgh at the time, and I went all the way into Princes St, to the biggest Waterstones in town, walked up to the counter, and asked for a book.

Then, as I turned to leave, in a conspiratorial whisper. "Do you really want to buy it?"

"In that case, that will be ..." [however many pounds it was - more than I could comfortably afford at the time, at any rate]

They took my money at the till, then, as I walked out the front door, another member of staff sidled up to me and passed me a plain, brown-paper-wrapped package. ("Like a copy of the Sheep-shagger's weekly," as a friend of mine remarked a few days later).

And that was that. I'd bought my copy of The Satanic Verses. 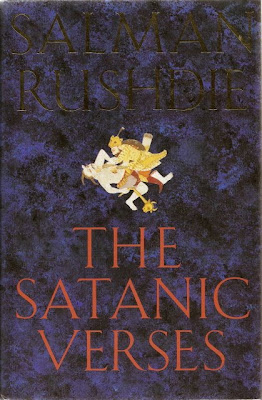 
Unlike most of the other pundits who were waxing eloquent on the subject at the time (including various cabinet ministers and senior diplomats), I took the book home, sat down, and read it. From cover to cover. No "curse of page 15" - no "I've read in it" or "I've read parts of it, enough to know ..." I guess that's the trouble with studying literature, it does leave you with that settled predisposition to read a book before you start to spout on about it.

And I really liked it. I mean - don't get me wrong. I could see their point of view. A number of bookshops had already been bombed for having it on display in their windows. Now, increasingly, the mere fact of being known to stock it was regarded as an incitement to violence. In Britain, at any rate.

The best way of getting me to read a book, though, is to tell me it's forbidden. Sorry. I side with William S. Burroughs on that one: "Everything is permitted." It may not always turn out to be good for me, but I'm going to decide that one for myself, I'm afraid. What's the point of living in a (so-called) "free" society if you don't take advantage of it? It wasn't by chance that I compiled an entire website devoted to Banned Books. Check it out sometime.

No school committee, board of censors, council of churches, or other clutch of ignoramuses is going to tell me what I can and can't read.

Cops and Customs Officials, yes. They have the guns and the numbers. They can physically confiscate stuff. But until they actually do, there I'll be, happily reading away, ruining my eyes and my mind, and basically just checking it out for myself. In the Spirit of Crazy Horse!

Here's my own collection of Rushdie-ana: 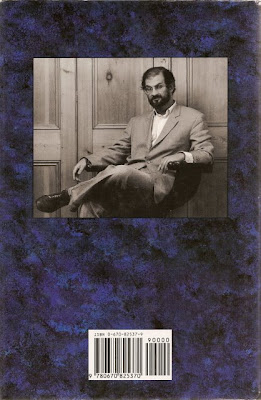 
Coming back to Joseph Anton, though, I guess the important thing about it, from my point of view, is that it fills in all the gaps of the story that we were unable to find out about at the time.

I must confess to having felt some curiosity as to how the famously "ugly" Satan-Rushdie (that hooded look was apparently the result of a medical condition, he tells us: once his eyelids were surgically corrected, he suddenly looked a whole lot less surly and "ungrateful") managed to get together with Padma Lakshmi, the stunningly gorgeous host of TV's Top Chef ... It's all here, along with brickbats (and occasional bouquets) for virtually everyone in English-language literary life over the last few decades: 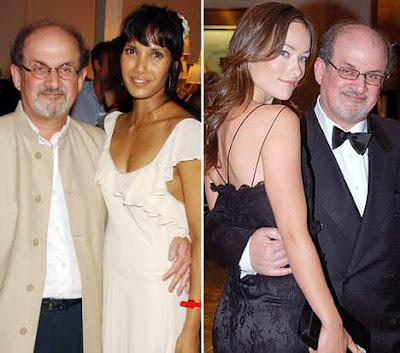 [Rushdie with Padma / & with "Old friend of the family" Olivia Wilde]

And, yes, this is definitely a tell-all memoir. He softens nothing, pulls no punches - above all, won't apologise for anything. There are no attempts here to imply that all those ignorant chanting fanatics "might have had a point," or that he could have just cut a few pages out of his book and thus removed the "cause of offence," or that Thatcher and her minions really had his best interests at heart in trying so successfully to fudge the issue for years at a time ...

I do think that this is a must-read for other writers, in particular. It's downright inspiring to watch Rushdie in action. He's so convinced of his own importance, of the importance of liberty of thought and freedom of speech (and of the necessity of keeping on earning royalties in order to keep all those wives and kids in alimony and childcare payments ...) Anytime one's tempted to falter or temporise on anything, Salman Rushdie provides a useful wake-up call. The one thing he's genuinely apologetic for is for trying to reach a rapprochement with various Muslim clerics in the UK. The "apology" he then wrote sticks in his craw like nothing else in the whole saga.

Predictably (in retrospect), this text, dictated by people who had no real influence over the course of events, accomplished nothing. Nothing except alienating his real friends and supporters. It was human to try, though, and it's this humanity that is, finally, the most valuable thing in Rushdie's book. He's not in any way a humble man, but it's nice to know that even he can get scared and make stupid mistakes - just like anyone else in such an impossible position ... 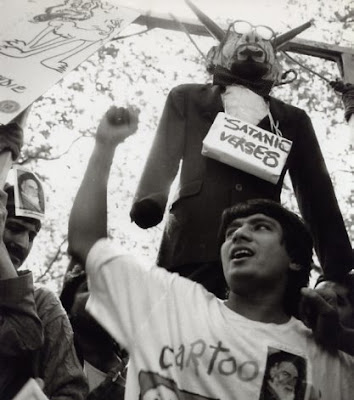 Hi Jack, I'm reading Joseph Anton too. I have to agree it is a compulsive and enjoyable read.

I started on 'Midnight's Children' but at the time I had several other books for a course in "Post Colonial Lit" taken by Neil (Sam's brother!) and Sebastian Black, and the African writes had shorter books e.g "Time of the Butcher Bird" by Alex La Guma and a book by Desai. In any case I sacrificed the Rushdie book (and sold it with about 4 boxes of books for about $2000 to another book collector / dealer) but I "stole a part where he goes on about the "the green and the black the red the green" etc which reminded me of my poem 'The Red' so I ripped it off for my The Infinite poem'!

Just as I "stole one line by Derrida "This then shall not have been a book" - but then I shut the book - that was enough "hard ware for one day" fro me! (Disseminations?") and sold it to Brett!! I think he gave or sold it back.

But I must revisit Rushdie. I get him mixed up with Umberto Eco and Marquez (don't worry my mind such as it is has always done that to me even as a teenager I think...dementia isn't fully blown...yet.)

But he has a good taste in women!

Is 'Shalimar the Clown' good?

Which is or are Rushdie's best novels?

Have you heard of Geoff Dyer? I haven't read any of his books but his essays are great (I came across his book 'Otherwise Known as the Human Condition' by chance, I had never heard of him until a month ago)

But he wrote an essay called 'Readers Block'...as writer he now reads less and less as when he reads he feels he shod be writing...

Not working as he spent most of his life (if not all) on the dole in Britain!

As for Rushdie's best novels, I have to confess that I haven't read all of them (yet).

Shame is very good, I think - as is Midnight's Children (especially when read while travelling through India: all of a sudden it all seemed to make perfect sense) ... & of course everyone should read The Satanic Verses ...

Haroun and the Sea of Stories is an unexpectedly charming children's book, but its sequel Luka and the Fire of Life isn't much chop.

Didn't get far with The Enchantress of Florence and didn't much like The Moor's Last Sigh. I haven't read Shalimar the Clown, so I'll be interested to hear what you think of it.

Thanks Jack - it's reassuring to know you haven't read all his work! Of course we need to read The Satanic verses...I saw that film about the division of India...that will do me for Midnight's Children!

But while I know you don't need anymore books as such(!!), but if you do spot Geoff Dyer's 'Otherwise Known as the Human Condition' I recommend it. (The cover looked quite attractive so I got it from the library.) I don't know about his fiction books.

I'm getting my second more "direct" Blog "Richard,you MUST try to be more focused - " ready to go and have a draft of my first post. I will do essays and some lit crit. so I need to read your book and also Scott's. I'll do reviews of books old and new etc and maybe some political comment but I'm wary of that - certainly not as strange perhaps as EYELIGHT which will stay there, of course (for now, or as long as it can).

What's the next one?

You may well ask. I think the answer will surprise you ...