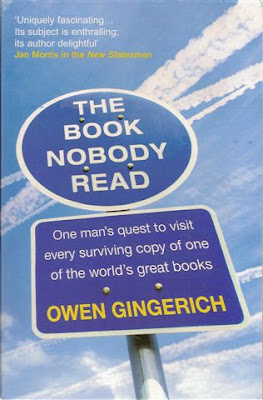 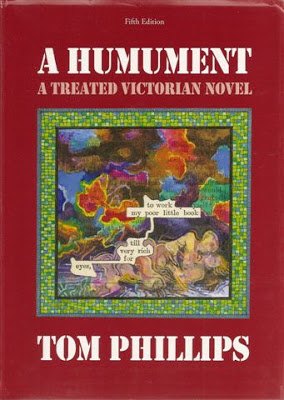 Sometime around noon on the 5th of November, 1966, the artist Tom Phillips was poking around an old warehouse in London, looking for bargain books:

When we arrived at the racks of cheap and dusty books left over from house clearances I boasted to Ron [Kitaj] that if I took the first one that cost threepence I could make it serve a serious long-term project. My eye quickly chanced on a yellow book with the tempting title A Human Document. Looking inside we found it had the fateful price. 'If it's a dime,' said Ron, 'then that's your book: and I'm your witness.' ['Notes on A Humument,' p.370]


45 years and five editions later, A Humument stands as a curious monument to human ingenuity. "Energy worthy of a better cause," as my father might say. Or energy very sensibly employed, perhaps? Who can say ...

Phillips does goes out of his way to mention the interesting fact that the warehouse stood on "Peckham Rye, where William Blake saw his first angels", and it was (of course) Blake who once reminded us that energy is "eternal delight."

Sometime in October 1970, Historians of Science Jerry Ravetz and Owen Gingerich asked themselves whether (at the time or since) anyone had actually read Nicolaus Copernicus's ground-breaking text De revolutionibus orbium coelestium libri sex [Six books on the Revolution of the Heavenly Spheres] (1543). The question was prompted by the rather bad review Arthur Koestler gave the book in his 1959 classic The Sleepwalkers: A History of Man's Changing Vision of the Universe. Koestler referred to Copernicus's book as an "all time worst seller" and "the book that nobody read." But was he right?

How can you actually tell if anyone read a book or not? A simple name on the fly-leaf is insufficient. I have lots of books in my collection which I've never read. Some of them are reference books which it's useful to have but which I'll never read cover to cover - others I'm been meaning to get to but haven't yet done so.

Nor is quoting from the book any kind of irrefutable proof. Plenty of people read the summaries and advertising copy for Copernicus's book, but did the do more than dip into its somewhat forbidding contents?

The answer (according to Gingerich) is marginal annotations. His conversation in York that Saturday evening in 1970 prompted him to look up a copy of the first edition at the Royal Observatory in Edinburgh. It turned out to be annotated from beginning to end, and thus suggested the interesting counter-question:

If it was read so rarely, why was the very next copy I chanced upon so full of evidence of a most perceptive reader, who had marked innumerable errors and who had worked his way through to the very end, even past the obscure material on planetary latitudes that brought up the rear of the four hundred page volume? [The Book Nobody Read, p.422]


And so began on what the blurb to his book calls "a thirty-year odyssey to examine every one of the hundreds of surviving copies of the original in order to prove [Koestler] wrong."

Once again, it sounds a rather unlikely way of spending one's time - fantastically arduous and demanding an almost insane level of precision in recording every detail of every copy (labour which eventually resulted in An Annotated Census of Copernicus' De Revolutionibus (Nuremberg, 543 and Basel, 1566) (Leiden: Brill, 2002), to which The Book Nobody Read is a rather more lighthearted companion volume).

Along the way, Gingerich discovered a huge amount about the sixteenth-century scholarly networks, transcending religion and politics, which united the astronomers and mathematicians of the age, and which enabled them to copy and supplement each other's notes in the margins of copy after copy of De revolutionibus. Koestler's rather flippant and dismissive remark was proved not only to be "dead wrong" (as Gingerich puts it), but to mask a whole complex of fascinating (and hitherto undreamt-of) connections. 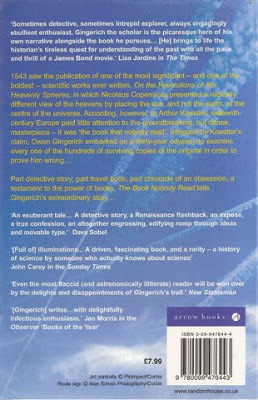 [The Book Nobody Read] 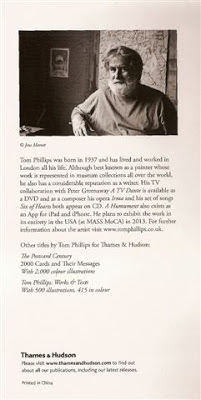 So what's my point in comparing these two projects? They both seem to have occupied roughly the same period of time: forty-odd years for Phillips, thirty-odd years for Gingerich. Both have as their central object the illumination / elucidation of a single book: in Gingerich's case a (famously unreadable) scientific classic, in Phillip's a (not very widely read) Victorian novel, W. H. Mallock's A Human Document (1892).

Of course in the one case Gingerich's labours could be said to have cast light on an obscure sector of intellectual history; whereas Phillips' indefatigable cutting and pasting and colouring casts light on nothing except the strange workings of his own mind.

Or do they? Surely the mere popularity of Phillips's book - in contradistinction to Mallock's, which failed miserably to equal the success of his earlier satirical novel The New Republic (1877) - tells us something about the spirit of our own age, our postmodern distrust of the sanctity of the text, our singular dedication to game-playing and chaos?

Both projects are equally crazy. I guess that's what I'd like to suggest to you. I know that Gingerich's comes accompanied with all the panoply of "hard" science - the graphs, the tables of analysis, the famous names of the past - but then Phillips doesn't lack those scholarly trappings either. The fascinating notes on his project reprinted at the back of his book refer to it as "'a Gesamtkunstwerk in small format'", though a "full Variorum Edition may remain a dream (or a posthumous project) since the wheel is still turning and the odd spark still flies off" [p.383].

Both books, Phillips' and Gingerich's, are in fact "Human Documents" of the most fascinating kind: they show the unexpected consequences of immersion in virtually any product of the human imagination. The fact that they're both consecrated to particular copies of a single book doe tend to endear them to bibliophiles such as myself, but one can easily see how the principle could be extended.

In his lifetime, as the caricature below suggests, Mallock had a hard time reconciling the conflicting claims of religion and science. it's hard to know if he would have been pleased to see one of his novels at the centre of so arbitrary an embellishment as A Humument, but I doubt that he would have failed to see the point. If we can have no clear idea in advance of the end results of our investigations, then it doesn't pay to reject any possible line of enquiry out-of-hand. This applies to Phillips' work every bit as much as Gingerich's. 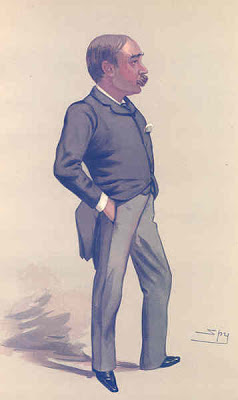 True, one might call Copernicus an intellectual giant, Mallock a dwarf, but it's salutary to remember that - during their respective lifetimes - the opposite was the case. Mallock was widely read and well regarded, while - to those very few who had heard of him - Copernicus was known only as an obscure cleric in a small town on Poland's Baltic coast, who exhibited the strange quirk of devoting his spare time to celestial mechanics.

One book I found lurking in the back of a second-hand shop in Whangarei; the other was lent to me by inveterate poet and text-experimenter Richard Taylor. I leave it to you to guess which was which. 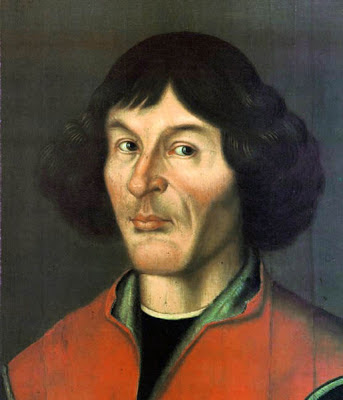 Fascinating Jack! Yes, who can say what will be the outcome of anything? Hume's point I recall when I studied some philosophy.

But (likely) probabilities tend to prevail, despite Murphy;s and Sod's various Laws.

As a teenager I used to read a lot about astronomy and Copernicus was in there with Newton, Edison and many others of course.

More recently I heard the letters of the New Zealander, Beatrice Hill Tinsley, who was one of the 20th Cent's most important astronomer astrophysicist. Have you heard of her?

I had a book of (recommendatiosnof greatboosk to read -I lve lists lie ahtt) and one book was Newton's Principia! The author had all the other (mostly predicatble but some not) writers and classics, but that surprised me. It is quite diffclut but in ayitis philspphyadnlasmot literature...but I am not that keen, I only read a few paragraphs of it.

Yes, it is great to HAVE those books. Many are for reference. Many to "burgle" some to re-read. Many to stay unread.

One thing - if I sell off, or dispense with, good books I have: a few years later or in good time I find all sorts of references to said books.

I had a book of bizarre books once and I used some of the titles in poems. One poem went more or less:

"Anderson walked off at this point, excited as if a man with a great purpose: The Joys of Proctology tucked snugly under his arm."