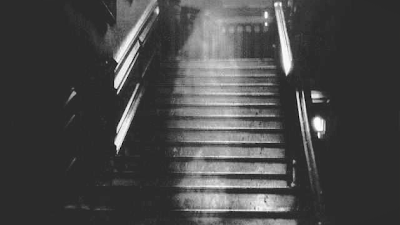 
I saw a ghost on Monday night. At least I think it was Monday night - the event is getting a little blurry now, a few days later. It might have been Sunday night, the end of mid-semester break, with the alarm clock set for the new working week, but I'm pretty sure that it was Monday.

When I say "saw a ghost," I have to admit that I was in bed at the time, and was definitely in that state of drifting in and out of sleep when most apparitions are seen. It might be better to say "I saw a hypnagogic hallucination of a woman on Monday night" instead, then.

I was lying in bed, as I say, and I saw a woman walk past the door of our room, up the corridor towards the bathroom and the stairs. My impression of her was that she had dark mid-length hair, and was wearing a trench coat or some other kind of dress coat. I think she was wearing a skirt, and had reasonably dressy shoes on too. I only saw her for a moment, though, so I could be wrong about that.

She definitely looked in at me as she passed, and I think she smiled at me - not a particularly warm or reassuring smile, as I examine it now in my mind's eye, but not a clearly threatening one either. A bit of a grimace, really.

I knew at the time that I should get up and go and check if there really was a woman in the house. The bed was very warm, though, and I felt somewhat reluctant to venture out into the cold dark hall. I did hear a few thumps and scrapes later on which (again) should probably have got me out of bed, but didn't. Such things are fairly typical in an old house built in the 1940s, anyway. It wasn't Bronwyn. I could see her lying asleep beside me.

Once before I've had a similar experience, half-waking in a motorcamp unit with the strong impression that there was a strange woman in the room, leaning over the bed. On that occasion, though, there actually was a woman (or so I conjecture). Our neighbours in the motorcamp had been having an uproarious time of it next door, and presumably this was just one of them who'd mistaken the door and walked into the wrong unit. I was wearing my earplugs to shut our the racket they were making, so it would have taken a fair amount of noise to wake me.

On this occasion, though, there's no reason to suppose that the woman was real. The front door was still snibbed with its chain next morning, and the back door was bolted. I don't have any clear guesses who she was, either. She wasn't my sister, who did die in that house: wrong hair colour, and quite a different face.

I record the event for what it's worth, then (not a lot in evidential terms). I've seen hypnagogic phenomena before in that half-asleep / half=waking state: grey cats coming at me across the bed-covers; other animals, friendly and threatening - never a person or even a human face before.

I should add that I'd been reading a book about ghosts before going to bed (Roger Clarke's A Natural History of Ghosts: 500 Years of Hunting for Proof), so no doubt I was primed to see something. I have read an awful lot of books on that subject, though, and even slept in allegedly "haunted" houses and rooms, but there's never been so much as the hint of an apparition before - certainly nothing as clear as this.

So is our house haunted? Who can say? There's been no repetition of the sight in the nights since then, and I suspect there won't be - it was an unusually concrete dream manifestation, that's the best I can do. I have no idea why it took that particular form, though. 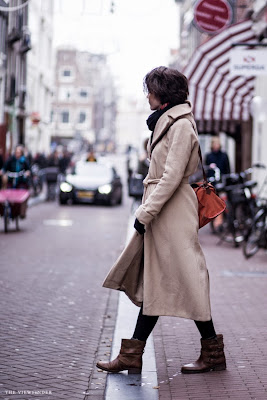 [She looked something like this: only without the bag and the styly boots:
she had straighter hair, too, and her face was turned towards me]