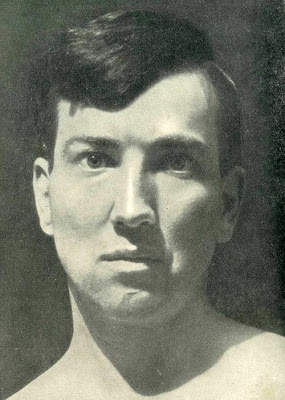 
I suppose that the upcoming anniversary of the outbreak of war in August, 1914 has got me thinking again about the literature of the First World War. Having recently read Harry Rickett's excellent book Strange Meetings: The Lives of the Poets of the Great War (2010), I realised just how little I knew about so many of the writers he mentions. Some, admittedly, sound more interesting as people than poets: Robert Nicholls, for instance. It did get me daydreaming of a systematic re-reading of some of my favourites, though.

Probably first and foremost among these is Robert Graves. Just last year I managed to acquire the missing volumes of his nephew Richard Perceval Graves' rather soupy (but nevertheless indispensable) biographical trilogy about his uncle. I'd read them before, but they did remind just how long and complex - and strange - a time "old Gravy" (to quote Siegfried Sassoon's nickname for him) had of it: all those books, all those projects, all that basking in the sun in the Balearic Islands (or, rather, sitting inside reading and typing in Deyà, Majorca).

In fact it was rereading Sassoon's own (lightly fictionalised) autobiographical trilogy, Memoirs of a Foxhunting Man, Memoirs of an Infantry Officer and Sherston's Progress that got me going again on Graves (whom he calls, in context, "David Cromlech"). They were very different people, and their friendship did not long survive the war - though it was really the advent of Laura Riding, Graves's principal model for the "White Goddess" that clinched it. That, and some rather tactless demands for money on Graves's part ("Why keep a Jewish friend unless you bleed him?" as Sassoon rather chillingly remarked in a verse letter to RG). 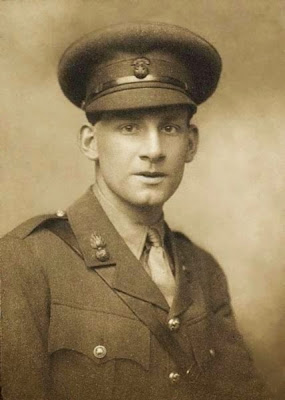 
Rather than personalities, then, I thought it might be best to concentrate on Graves's undoubted successes, his unequivocal masterpieces, if you like. In my opinion there are (at least) five of them:

The concensus of opinion now seems to be that the best version of this "early autobiography" to read is the 1929 one, published shortly before Graves's departure for Majorca with his new muse, Laura Riding. The 1957 revision, which is the one I first read myself (and which is most readily available) tends to soften the abrupt and eccentric typography and sentence structures of the original text, althrough it does expand on certain details (notably Graves's relationship with T. E. Lawrence). The awkward truth is that neither version is entirely satisfactory on its own: you really have to read both to appreciate the full force of Graves's imagination in full cry. 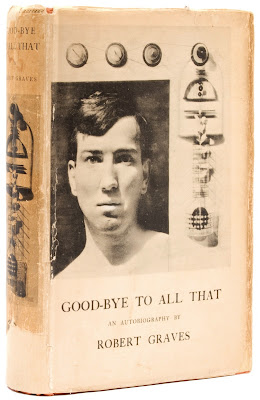 
Ever since this book was dramatised by the BBC in the 1970s, it has needed little introduction (there was an earlier attempt to film it in the 1930s, with Charles Laughton as claudius, but that ended up on the cutting room floor, unfortunately). It remains by far the most convincing and entertaining revisionist history of the early Caesars, despite all the myriad attempts to supplant it since. It's also the most immediately accessible and readable of Graves's historical novels, despite the fascinating material included in many of the others. 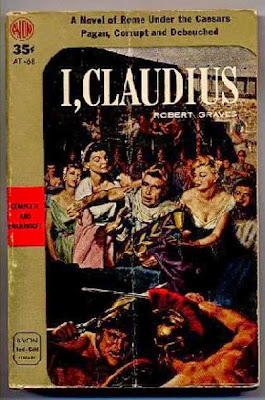 
It's hard to describe this book accurately without making it sound like the work of a raving lunatic. Graves's speculations take him from the stone age to late antiquity, and include "solutions" to any number of unsolveable riddles and conundrums. It has to be experienced to be believed, but there's no doubt that no-one has ever written a more explosive book on the true nature of the poetic imagination. 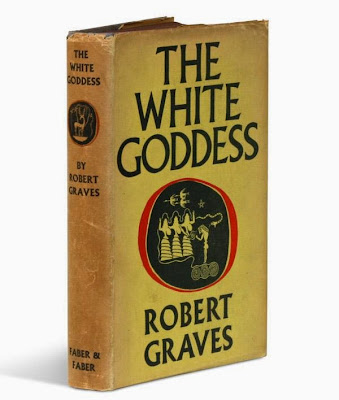 It may seem a little surprising to include a mere translation here, but I do feel that this one stands out from Graves's many solid achievements in this genre. There's something about his deadpan delivery which enables Apuleius' masterpiece to shine out, unimpeded by the clumsy literalism which so many of his other modern translators have clung to. It stays in print for a good reason: because people enjoy it more than any of the rival versions. 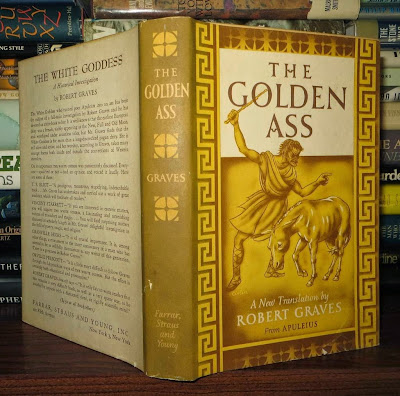 The successive editions of this work incorporated more and more of Graves's increasingly out-there conjectures about the ancient Greeks (the contention that "ambrosia" was magic mushrooms, for instance), but for sheer concision and completeness, it's hard to fault this work. It offers multiple versions of most of the stories, together with clear source notes and - admittedly speculative - explanations of some of their stranger features. In other words, it emphasises the dynamic and fluid nature of myth, rather than clinging to a single interpretative paradigm. That's one reason it's still of use 60 years after its first publication. 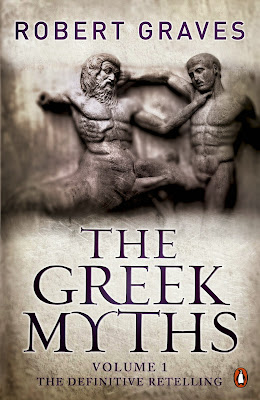 
Some would add to this list his bizarre series of speculations about Christianity, culminating in the massive Nazarene Gospel Restored (1954) - and including along the way such eccentric works as My Head! My Head! Being the History of Elisha and the Shulamite Woman; with the History of Moses as Elisha related it, and her Questions put to him (1925), King Jesus (1946), Adam’s Rib and Other Anomalous Elements in the Hebrew Creation Myth: A New View (1955), Jesus in Rome (1957) and Hebrew Myths: The Book of Genesis (1964). 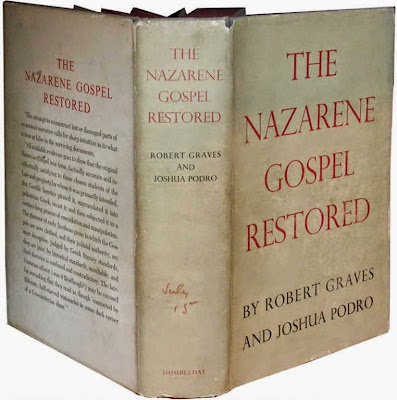 
For me, that's a step too far. But I certainly acknowledge that this was - first to last - one of the subjects which most consistently interested Graves, from the very first poem in his Collected Poems, "In the Wilderness," about Jesus's meeting with the "guileless young scapegoat," to his later works of Biblical reconstruction, many of them written in collaboration with Talmudic scholar Joshua Podro. 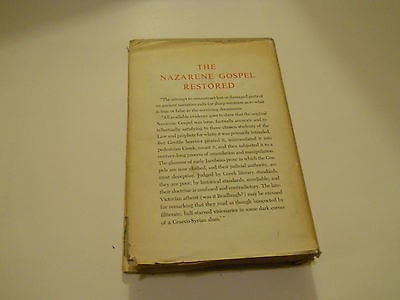 
But why no poetry? Graves was, after all, a poet first and foremost. I have to say that my enthusiasm for his poetry has waned over the years, though I still like a lot of the pieces included in his own successively winnowed-down volumes of Collected Poems, culminating in the 1975 volume which was the last he personally oversaw.

This has now been supplanted by the three-volume Carcanet edition of his Complete Poems (also available as a single volume, without the apparatus and textual variants). I suppose there would be an argument for including that, too, among the "indispensible" works of Graves. There's a lot there to take in, though, and certainly a lot that he personally repudiated along the way. 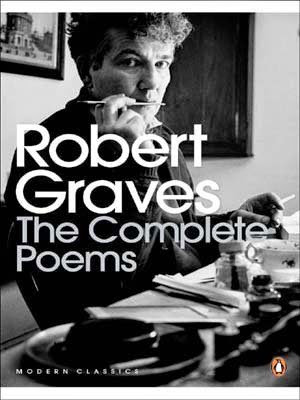 
As a supplement to my usual habit of listing all the books which I, personally, own by Robert Graves (and there are many), I thought it might be best to begin by discussing Manchester poetry publisher Carcanet's fifteen-year Robert Graves project.

Beginning with the three volumes of Complete Poems mentioned above, they've reprinted, in handsome, well-edited new editions, the following texts - often in new, definitive versions. I've put in bold the ones that I myself own - or have on order at present:

It's a terrfiyingly ambitious project. They've republished all 14 of his historical novels; all his short stories; all of his poetry; a substantial selection of his essays, works of non-fiction and translations; as well as the most substantive of his collaborations with Laura Riding.

I'd really like to own the entire set, but one must be sensible - and, after all, I have most of the others in their original editions. The only serious deficiency in my own collection is their new edition of The Nazarene Gospel Restored (with significant revisions and additions). It seems to have gone out of print almost as soon as it was published. They do list it as "reprinting" on their website, though, so I do have hopes of being able to purchase it soon at a non-prohibitive price. 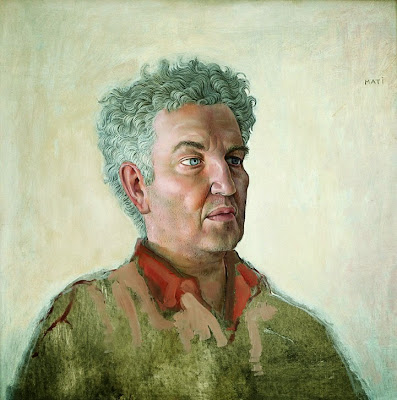 I have the two remaining volumes of Complete Poems on order, but haven't received them yet. Volume I is certainly impressively scholarly (if a little overwhelming), though.


I think there are a few more children's books, and an early novel written in collaboration with Laura Riding - No Decency Left (1932), not to mention his "re-written" version of Dickens, The Real David Copperfield (1933), to collect, but otherwise I think that's all his published writing in this form.

This is the hardest genre of Graves-iana to collect - he wrote so many books of essays and miscellaneous non-fiction, sometimes with different titles (and even different contents) for the UK and US editions. As you can see, I have been fairly assiduous, but there are still many gaps in my holdings.

The only translation I'm aware of lacking is Georg Schwarz's Almost Forgotten Germany (1936). There may well be others I don't know about, though. There's a good deal of translation in some of the books on mythology.


Graves is alleged to have done a good deal of editing work on both of these books of war memoirs by "Frank Richards" (born Francis Philip Woodruff).

Probably the best of these biographies is Miranda Seymour's - there's no getting over the completeness and detail of Richard Perceval Graves' rather family-centred version of his uncle's life, though. Martin Seymour-Smith's is well written but (I'm told) unreliable on details. Probably the letters give the best sense of the man himself. 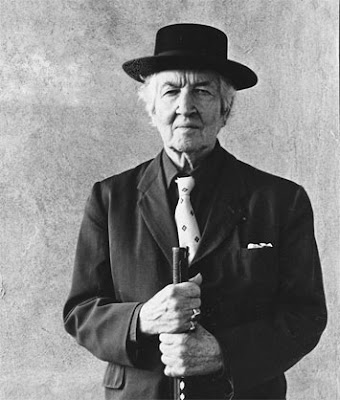 Good as usual. I have some of those books and read something of Graves in a biog of Laura Riding. Like many books I have to say I never finished that although it is good I just seem to drift off so to speak. I have those books (paper back) of the myths and Goodbye to All that in a battered Penguin. Leicester was very keen on that book, but I have never got further than page one, again not because it wasn't interesting, I liked it - partly I think I really didn't want to read about war.

I did read some time back most of the books by Pat Barker on Sassoon, Owen and the psychiatrist or psychologist Rivers. They are a great series.

I have a (Penguin - they are very easy to find) of Graves's translation of The Golden Ass - one can go through life not doing many things but to not read that is close to criminal...

Of course there were the I Claudius and the other thing on TV (a very good series). For those times the film 'Caligula' is very good if rather, well, you have to see it: complete with Richard Strauss's great and ominous music from his opera 'Romeo and Juliet'!

I just peered into at Baker's bio of Ryder 'In Extremis' and she sent so many letters to Len Lye at one stage (about a libretto she was doing for him for something) he had to neither receive or send anymore to her. Graves was just the chap to be with Ryder with his huge frame and his cape and so on!

But you might even do something about Laura Ryder also: some of her poems are great but others are abstract strange (which isn't a always a bad thing) - I think the best were those influenced by Stein - but I once read a couple really strange but interesting stories by her...

It was a good thing that such as Graves learned Greek and other languages in those English schools as it means they were able to tackle the Greek stories etc, albeit idiosyncratically in his case.