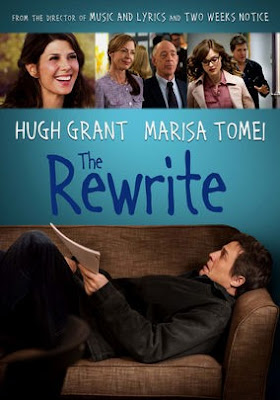 
Bronwyn and I were watching this truly silly Hugh Grant vehicle the other night, when I got to thinking about the portrayal of Creative Writing teachers on screen - to date, at any rate. Strangely enough, there were one or two moments during the film when I got a faint intimation that its author (also its director) might know something about what he was talking about.

Hugh Grant was turning in his usual foppish performance as ineffectual-Englishman-abroad, but sometimes - such as the moment when he was forced to face the full horror of a Creative Writing class he hadn't prepared for at all - when it began to resemble reality for a brief instant.

His method of evaluating portfolios - consisting of checking out their respective author's profile pictures on facebook, rather than actually reading any of them - had a certain undeniable panache, but it was when I found I was actually taking note of some of his techniques and resolving to try them out next time I'm in class, that I realised that the movie was working for me, at least: despite the complete lack of any screen chemistry between Hugh Grant and Marisa Tomei; despite the floppy, rather pointless ending.

That's pretty sad, isn't it? Taking pointers from Hugh Grant. I must be desperate. 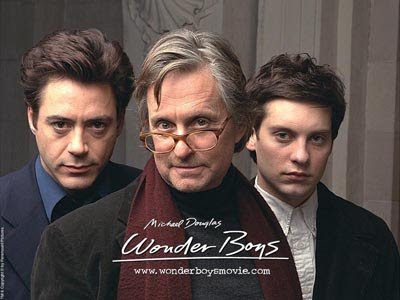 
It got me to thinking, though. What are some of the other notable Creative Writing teacher performances in cinema history? I was very shocked indeed to discover, a few years ago, that none of my colleagues had ever even seen the Great-Grandaddy of them all: Wonder Boys.

I'm afraid that this film has been in my personal pantheon for so long that it is, for me, beyond all criticism. I know people say that Michael Douglas was miscast, that he's too old, that he doesn't look enough like an intellectual ... etc. etc. Blah blah woof woof - as Jessica Alba once memorably put it in an episode of Dark Angel.

Who the hell cares what he looks like? Whether there's even the slightest plausibility in any of the events of that long strange weekend in Pittsburgh, the weekend of Word-fest?

"That book of yours must have been one nutty ride," as one of the bit-players remarks to Grady Tripp, Michael Douglas's character in the movie, author of Arsonist's Daughter, "a little book I wrote 'under the influence,' as you put it, which happened to win a little thing called the P.E.N. award," as he points out pompously to Katie Holmes, who is trying to persuade him to edit out one or two little details ("the characters' dental records, the genealogies of their horses") from his latest opus.

I find myself quoting from it at least once a day: "As fit as a fucking fiddle" - Grady's description of Tobey Maguire's character, aka: "James Leer, Junior Lit major and sole inhabitant of his own gloomy gulag", whom he's just caught with a loaded gun out in the garden of the Vice-Chancellor's house; "Jesus, what is it with you Catholics?" - the "sensitive" response to James's latest story from one of his classmates; "Sometimes people just need to be rescued" - when Grady and his editor bust James out of his grandparents's house, leaving a dead dog behind in his bed to act as decoy:

"Spells? Jesus, James, you make it sound like we're in a Tennessee Williams play. I don't get spells." / "What do you call them, then?" / "Episodes."

I love the way that nobody uses anything but a typewriter to produce their various works, short or long, with somewhat unfortunate results when it turns out that Grady, for one, does not make copies. "It's not dark yet, but it's getting there," as Bob Dylan puts it in one of the two songs he contributed to the film.

"It's nice to know that the youth of America are in safe hands" is Robert Downey Jr.'s parting shot as he disappears into the Dean's office to attempt (with mixed success) to parley them all out of trouble.

Part of it is the excellence of the book it's based on, of course. Michael Chabon's second novel is yet another long love-letter to Pittsburgh, his "drug of choice," as Grady characterises Frances McDormand's taste for the written word. Whole sections and subplots of the book have been left out of the cinematic version. What is there, however, rings true enough to Chabon's semi-autobiographical tale of a writer caught in the trap of an unfinishable and uncomfortably vast second novel, after the breakthrough ease of his first, the Great Gatsby-like Mysteries of Pittsburgh.

Mostly, though, it's just that even though our professional (and private) lives could never bear the faintest resemblance to Grady's (perish the thought!), one can't help feeling at times that they should - that it should be as cool a thing to do as Michael Douglas makes it. For me, this is the closest thing to Holy Writ the profession has yet inspired. 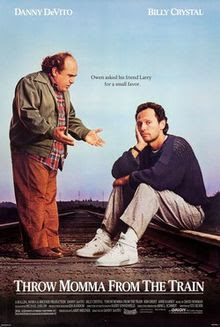 
When it comes to quotable quotes, though, this early effort by Danny DeVito and Bily Crystal is pretty impressive, too. The DeVito character's "short stories" - all of which run something like "He came into the room. He was carrying an axe. He hit her with it again and again and again. Until she was dead" - are quite effective, as are Billy Crystal's attempts to improve them a bit: "There's no real suspense. We don't get to know any of the characters, to feel for them, before they get killed - perhaps instead of killing her he could offer her a mint julep?"

Good, too, are Crystal's struggles with the first line of his new novel: "The night was ..." hot, sweaty, cold, dark, humid - culminating in the "Momma" character's suggestion: sultry. "I'll kill her myself," shouts Crystal. Maybe because she's a better writer than he is.

The term "criss-cross" certainly entered my vocabulary thanks to this film. For years, though, I was under the impression that it was an actual quote from Hitchcock's Strangers on a Train, which Throw Momma from the Train sets out to parody with such vigour. Not so, it would appear. It's all Danny DeVito (or, I suppose, the screenwriter, Phil Silver). 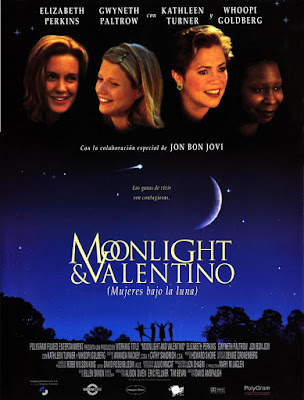 
Finally, last and probably least, there's this little zircon from the mid-nineties. At the time I had a bit of a crush on Elizabeth Perkins, who plays an uppity poet forced to teach Creative Writing classes for a living after her husband dies in this otherwise forgettable rom-com. I can't quite remember who gets off with Jon Bon Jovi, who plays a hunky house-painter - but the plot summary on the Internet Movie Database says that he "profoundly affects" each of the four female star's lives.

I do remember a scene in class where Elizabeth Perkins is trying to explain to a student why the single repeated name of his girlfriend does not constitute a poem. He keeps claiming that to make any addition to the word would be pointless: it already expresses all the meaning in the universe. She keeps on arguing that his work cannot be expected to connect with an audience who've never actually met her. He says that he doesn't care.

I suppose what interested me about the scene was the way in which you could see the teacher gradually becoming more and more persuaded of the merits of his argument, while feeling unable to say so without letting the side down. A not too unfamiliar situation, I'm sorry to say. 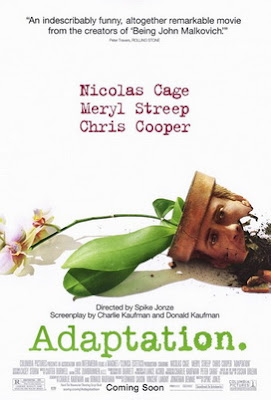 
So what do you think? There are bound to be others I've missed. I suppose one should include Charlie Kaufman's Adaptation, with its brilliant parody of Robert McKee - played by Brian Cox - and his (in)famous "story seminars." 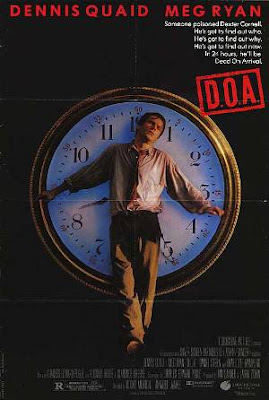 
Then there's a minor thriller called D.O.A. (a remake of the 1950 film noir classic), starring Dennis Quaid as an English professor who is poisoned by a colleague who is planning to plagiarise a novel by one of Quaid's students, a young man who has just committed suicide by jumping off a building (though actually he was pushed - by the colleague in question).

It turns out that the drunken slacker Quaid never even read the student's novel, simply scrawled an "A+" on the front, and so would never have been able to detect the theft. By then it's too late, though: everybody dies or goes to prison and the book doesn't even get to see the light of day. No great advertisement for the profession, to say the least.

There are plenty of other films about writers stealing other writer's work: The Words (2012), with Bradley Cooper, would be a case in point - or the rather more amusing The Hoax (2006), with Richard Gere, about the faking of Howard Hughes' memoirs - but that's not really the same thing. There's no element of writing teaching going on in either film, so far as I can see.

The same goes for the excellent 2006 Will Ferrell / Emma Thompson film Stranger than Fiction, or the even better Love and Death in Long Island (1997), or the surprisingly entertaining Ruby Sparks (2012), or even Misery (1990) itself, for that matter - or any of the rest of those truth-gets-confused-with-fiction-in-the-screwed-up-mind-of-a-writer movies ... 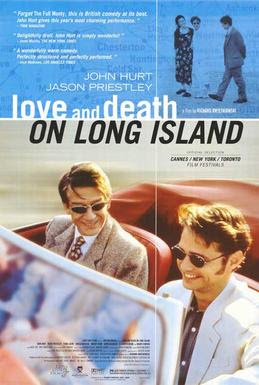 Interesting. I haven't seen the film based on Chabon's book but it looks interesting. I saw the film with De Vito who was great in the very good TV series 'Taxi'. But I had forgotten the plot that one of them had writer's block, but thanks to my "memory" called Wikipedia I remembered it (mostly).

Did you think of the film 'The Shining' which I finally saw a year ago or so: I always wanted to see the movie. It was good and I 'quoted' "All work and no play makes Jack a dull boy." That was a great movie. But it's not about teaching but has the aspect of writer's block.

My son has told me a lot about 'Misery'. It is a brilliant idea for a movie / book. Of course characters or fans getting into books is an old idea but that doesn't matter. In that respect 'At Swim Two Birds' by Flann O'Brien is an example of the characters rebelling and so on.

That fake biography. I read a biography of Hughes. I dont know who wrote it. I've been quoting it! Of course anything about his life is going to be pretty crazy...now I think of it perhaps it was the fake one.

Well, about 1992 I had written a poem with things in it from that (I read it at The Shakespear at Poetry Live and it went down well. In fact the US poet Kleinzhaler was there (he was the guest poet), and he liked it (he had come with Ashbery to Australia, but Ashbery stayed there), I had a beer with him and read him one of my poems. As a side comment his poems are good...