The Age of Slaughter 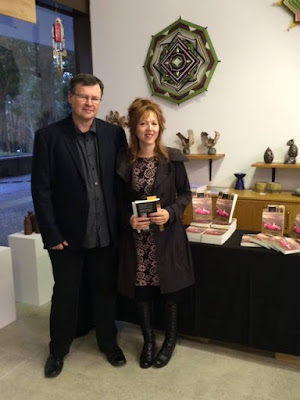 So on Thursday Bronwyn and I drove down to Hamilton for the launch of Tracey Slaughter's latest book, deleted scenes for lovers.

Here's Tracey with her book (unless otherwise noted, all the pictures in this post have been borrowed from Mayhem Literary Journal's facebook page): 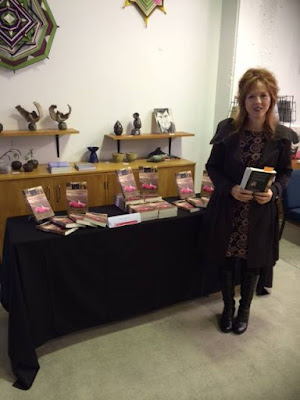 The event was very ably MC'ed by Waikato University's own Mark Houlahan: 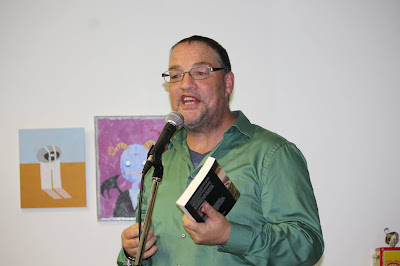 It was very well attended: 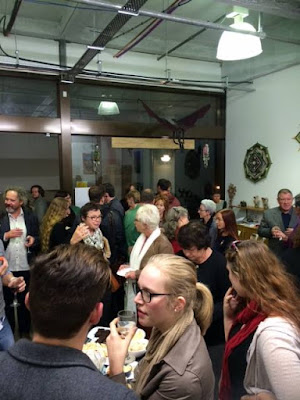 The Crowd in the Gallery 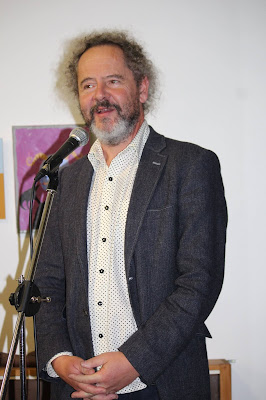 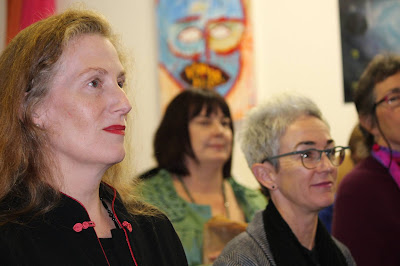 And also me, making the official launch speech: 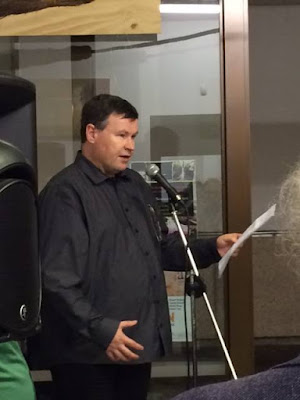 Me launching the book

And, for those of you who are curious, here it is:


There are many great New Zealand poets, novelists – and creative writers generally, but I still feel confident in claiming that the short story is the genre in which we’ve most distinguished ourselves.

To my mind, these are the four great epochs of the New Zealand short story:

First (of course) the Age of Mansfield: It’s fair to say that the atmospheric intensity of Katherine Mansfield’s fiction was helped by her reading of Chekhov, Flaubert and Maupassant. But I think her work would have developed that way even if she’d never encountered them.

Secondly, the Age of Sargeson: Again, there were outside, mainly American influences on the innovations pioneered here by Frank Sargeson. But his exploration of the literary resources of the New Zealand vernacular – breaking away from dialect as a kind of comic turn – remains revolutionary.

The chronology gets a bit more shaky after that, but the next great age, for me, is the Age of Marshall. Owen Marshall – still with us, fortunately – with his immense body of work exploring the New Zealand experience in all its multifaceted variety, built on the work of previous writers such as Maurice Duggan to present a more consciously symbolic reading of the landscape and mores of the country.

And now we come to the Age of Slaughter. This last category may rouse a bit more controversy. There are, to be sure, many fine practitioners of the art of the short story in New Zealand right now: Breton Dukes, Sue Orr, Alice Tawhai, to name just a few. What is it about Tracey’s work which gives it such extraordinary significance?

It’s not simply a matter of talent – though I would defy anyone to read Tracey’s latest collection, deleted scenes for lovers, which I feel so privileged to be here today to launch, and question the sheer magnitude of her ability as a writer: her ear for language, the mythopoeic intensity of her imagination. No, it’s more of a question, for me, of a paradigm shift.

This is one I’ve been sensing for quite some time, both in the work I receive as an editor, and the kinds of writing I see our students starting to produce – since Tracey and I both work as teachers of Creative Writing.

The Age of Slaughter, for me, has an Apocalyptic air. The authors born into it, or who inhabit it by necessity, feel at home with intense emotion. Unlike the schools of the laconic and the ironic that preceded them, they have no problem with excess, with big themes and extravagant linguistic tropes.

There’s a certain black humour about them, too: like William Faulkner, Tracey writes about situations so devastating that she almost forces us to laugh. Sometimes, as in the passage from a projected memoir with which she won the Landfall essay prize last year, she jets out passages of jewelled prose so intense and dazzling that we hardly notice the banalities of the seventies key party and ranch slider aesthetic that underlies them.

Both Sargeson and Marshall specialised in apparent simplicity: a straightforward surface concealing strange depths. Tracey, by contrast (I would argue), has taken inspiration from Mansfield’s late stories to use the full resources of a poet’s word-palette when painting her complex and devastating scenes. You always have to read a Tracey Slaughter story twice: even then some of its subtleties may lie in wait to ambush you later.

Courage, however, is the word which most frequently comes to my mind when I read Tracey’s work. She goes places others (including myself) are afraid to. The interrogation of the word “consent” in the story of that name, the sheer intensity of the wish for escape and freedom in “How to Leave Your Family,” the dark close of “The Longest Drink in Town” – there’s no holding back in any of these pieces. But neither is there any over-simplification, no failure – above all – to find the “right word, not its second cousin,” which Mark Twain defined as “the difference between lightning and a lightning bug.”

If you want to know where New Zealand culture is right now, read Tracey Slaughter. Buy her book; get her to sign it; you won’t regret it. I’ll go further. Even if many of you couldn’t care less about New Zealand writers and their various turf wars and attempts at self-definition (why should you, after all?), if you want to know how it feels to live in this country: to recognise the thousand small details that go to make up a sense of place: the feel of wet flannelette pyjamas on a child who’s wet the bed; how it feels to kiss a smoky mouth you shouldn’t, read Tracey Slaughter.

To say I recommend this book is to put it mildly. I think it’s an indispensable book. This is our Prelude, our That Summer, our The Day Hemingway Died. This is no drawing-room talent we’re talking here: this is Tracey Slaughter. And for better or worse, in all its beauty and complexity, but also its fears and devastations, its intimations of total eclipse, this is the Age of Slaughter. 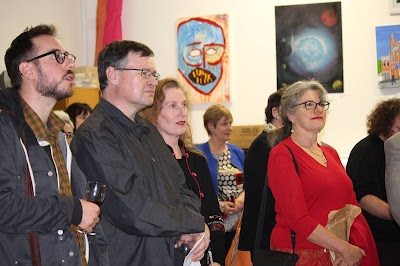 I liked those poems she wrote that I mentioned to you. They were very different from her stories. Which is interesting. I am the only other writer who writes almost as if there were two of me, although some of my poems that seem so 'different' are older poems. I tried to write stories, but they seem even more formidable than novels, if shorter. How to write like Damien Wilkins, Marshall and many others mentioned as well as Russian, English, and other writers round the world. Alice Munro and other specialize in the short story. Some of Joyce Carol Oates's have been made into film. In the US - Peter Taylor, John Cheever, Malamud, Hemmingway himself. Carver altho I haven't read any of his stories (I will do, but I didn't think much of his poems or those of Owen Marshall). But the stories by him in The Master of Big Jingles I read, or some of them, were incredible. I also like Chekov and du Maupassant as well as Maugham.

There, is, as you may know, also a writer called Alan Marshall in Australia. Mansfield perhaps didn't live long enough to go beyond the short story.

Some writers never seem to run out of steam. Six books! Impressive. I saw the review in the Listener which was very positive.

There are a lot of interesting writers in NZ now: women and men. Not like the time of Robin Hyde (who was more of a novelist, although most writers seem to 'practise' with short stories before writing novels.

Good speech Jack, you're looking more and more like John Ashbery these days by the way...You don't look like Gertrude Stein yet though.

Perhaps when the grey really takes over I'll start to look more like Gertrude Stein ... For the moment I'm happy to settle for Ashbery.

I use the expression "touch wood" as my English grandmother told me (not the USian "knock on wood"): so I will do so and say that at my last look John Ashbery is still alive. He has to be about 89. He seemed to almost never run out of ideas. But his once friend Schuyler is good also, as was O'Hara, sadly dead so young.

I started going grey in my late or mid 20s. Eventually, from about 1989 to 1994 or so I used to dye my hair. So some people didn't recognise me who had seen me at that time. Now I am almost completely incognito and am slowly changing into Gertrude Stein myself although I haven't thought of any new writing ideas...