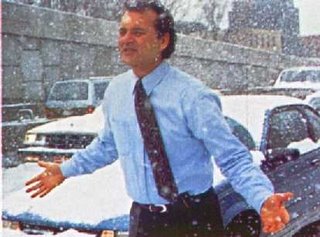 “I’m both! I’m a celebrity in an emergency …”
This is my launch speech for the screening of Gabriel White's new film (see further details here):

There’s a scene in the movie Groundhog Day where the cameraman Larry is trying to pick up a girl at a party. “People think that I just point my camera at stuff, but there’s a heck of a lot more to it than that!” She’s clearly unimpressed, and makes a hasty excuse to get away before he even gets to show her the inside of his van.

I guess the first point to make about Gabriel’s work generally, but especially his new film Aucklantis, is that there’s a heck of a lot more to it than meets the eye. Yes, on the surface it’s all very simple. He walks along the street, filming himself, and talking. Sometimes he does the washing-up while he’s talking. Sometimes he discusses where he’s going to put the camera.

This conciseness and economy of means is a mask, though. Gabriel has understood that the shortest distance between two points is a straight line. The remorselessly quotidian and ordinary nature of the things he films is designed to wake us up to the myriad strangenesses in the ways we react to the world around us.

I guess the most obvious analogy is with Joyce’s Ulysses (which he actually invokes at one point in the film you’re about to see). Again, the concept is simple: the events of one day in Dublin, seen through the eyes of a number of different characters, but patterned on the events and people of the Odyssey.

Joyce undercuts the bourgeois complacencies of provincial Dublin by setting them against the heroic intensity of Homer. Or does he? Perhaps he means to say that Leopold Bloom really is as much of a hero as his original, Odysseus.

Gabriel’s own model is Plato’s Atlantis – does he mean to satirise our lifestyle or simply examine it? That’s for you to decide. He certainly succeeds in making provincial Auckland seem as much of a battleground for the gods as Plato’s lost continent ever did.

I’d prefer to posit a connection with Groundhog Day, which is (I have to admit) one of my favourite films of all time. Phil (or Bill Murray) is forced to repeat the same day over and over again until he exhausts every possible way of living it. He ends up becoming a better person through sheer boredom and failure to discover anything else to do with his time. 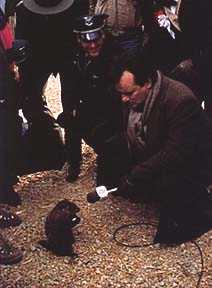 Gabriel, too, is bound to the beat between Freemans Bay and the City Centre. He, too, resolves to get all he can from it. But is it Gabriel the character or Gabriel the filmmaker I’m talking about? Is there a difference? In Groundhog Day the weatherman Phil is constantly paralleled with the groundhog Phil. Every day the groundhog is frightened by his own shadow, and so the endless winter goes on. Phil the character tries kidnapping his alter ego, singing its praises, abusing it – nothing works. When he stops acting like a kind of human groundhog himself, though, the enchantment is broken.

At one point in his own film Gabriel speculates that his shadow is spying on him through stealth technology. He’s getting the better of it, though, by watching it spy on him, and thus getting an angle on how he appears to it. He even acts up to it at times to give it interesting things to watch …

Groundhog Day required a cast of hundreds, a set of Hollywood Stars, finding a more photogenic small town to stand in for Punxsutawney, Philadelphia, and a few million dollars. Aucklantis succeeds in covering substantially more territory at a fraction of the cost by the simple application of wit and ingenuity.

It came as a great surprise to the makers of Groundhog Day when they started to get letters from rabbis and monks and religious leaders praising them for the wisdom of their film. It was, after all, just supposed to be another frothy Hollywood comedy. Gabriel’s film is funny, too, and one can read it on that level with no problems at all. Go deeper, though, and it’ll repay your scrutiny.