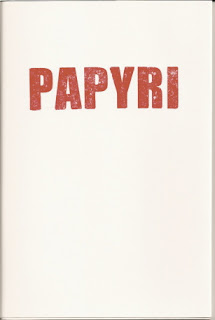 I have an announcement, and I have a question.

The announcement is that Michael Steven at Soapbox Press has just published my sequence of versions from Sappho in a limited edition of seventy signed chapbooks. It's called Papyri, and it's the second in a series which already includes his own first book of poems, Homage to Robert Creeley.

Further titles are promised later in the year ... 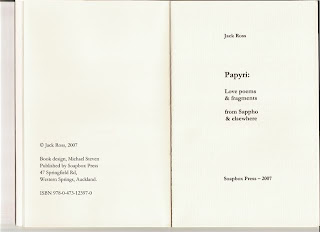 If you'd like to buy a copy, they're available in Parsons, Jason Books and Moa-hunter books, but they can also be ordered directly from the publisher at:

The question is, what's your opinion of single-author collections of essays?

Bronwyn says she thinks essays are better off jostling with other kinds of writing in a magazine or anthology.

Scott Hamilton, on the other hand, claims that unless our critical statements, manifestoes, reviews etc. are collected in some kind of permanent form, then literary discourse remains entirely in the hands - or between the covers - of the establishment.

I'd like to agree with him. I 've read plenty of interesting books of that sort by the likes of Leslie Fiedler (No! In Thunder) and George Steiner (Bluebeard's Castle), not to mention collections of tarted-up reviews by writers I admired for their poetry or fiction.

However, I do wonder how many essays can really survive transplantation from their original contexts? This especially applies to reviews, of course, but also to pieces written for a particular magazine at a particular time, to combat some particular injustice or misapprehension.

Anyway, what do you think? Do you think it would be useful if more essay collections came out in New Zealand? At the moment it's mainly Victoria University Press that issues them, and their list is generally reserved for big guns such as Wedde, Manhire and O'Brien ...
Posted by Dr Jack Ross at 1:46 pm

Excellent book. Great 'translations' (when is a translation a translation etc) - lyrical with more than a hint of Rossian wit! But seriously - very beautiful.

The Language Poets' strength was that they talked about each others' poetry extensively and usually positively (or to the point) - it is tactic - it worked - many of them of course branched off into "post language" language poets etc. Joyce began his literary life by writing essays. Pound. I like Lamb, Lytton Strachey, Huxley ("Texts and Pretexts I used to read over and over as a teenager - he has the best translation for me of the waiting at midnight poem by Sappho - Carson's of that I think is weak),Hazlitt, Davenport, Charles Bernstein, Barthes, Edmonds and many others.

I am less attracted to essays dotted in magazines - however that is also valid. Also need - but more independent publications - certainly publish some of your own.

Prefer collections. I toyed with the idea of writing (a book about) or contributing to something about Smithyman (or Brunton) and or the NZ lit. scene - in fact may do that by myself. May kick it off if (when I recover from this terrible liver disease) I get a great burst of enthusiasm. Promise to consult various dictionaries, philosophic tomes, spelling & grammar books.

The Establishment is there - but we need to sidle from its jaws sometimes.

Aside from promotion and criticism essays offer pleasure and solace as do novels etc.

The essay is an art form in itself - invented as you will know by Montaigne - and translated by Folio so in fact Shakespeare read his essays in English (it is surmised). I have read a number.

"However, I do wonder how many essays can really survive transplantation from their original contexts? This especially applies to reviews, of course, but also to pieces written for a particular magazine at a particular time, to combat some particular injustice or misapprehension."

This was one weakness of "Karmic Traces" (not as cheesy as it sounds) - but it was still interesting ( e.g a fascinating thing about Macdiarmid or Grieve) - and Sontag; her (good) essays wont date nor do I feel that those of Steiner will - or Lamb or Hazlitt or e.g "The Pleasures of the Text" so (apart from 'tarted up' things and fill ins) the essays will survive - however a good introduction is always needed - and in introduction to the introduction if needed!!

If the essays are about a particular set of concerns, or if the writer is well-known enough to be of interest, or if the critic's known for bombast (eg John Dolan, yea, I'd read his essays) then the collection could work. I don't read collections of reviews. I'm more inclined to read a collection of essays on a particular topic (I've just been browsing through a collection on Macbeth). Hope this helps. I'm far more interested in poetry than criticism these days.

Re: essays and context, I think it depends on a number of things - such as how cohesive they are as a whole, and how well one can read the context *in* them, whether they self-contextualise (I'm thinking of something like Rushdie's Imaginary Homelands here)... one way of solving this problem, that can sometimes work well, is to have the author write a sort of contextualising framework for them - say, break them into sections and introduce each section.