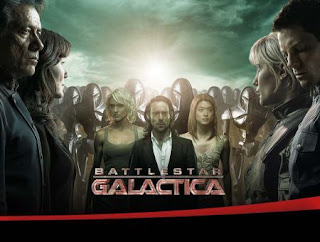 Well, yes, I guess you don't have to be a genius to figure it out. The feature-length miniseries which spawned the remake first screened in 2003, less than two years after a certain sneak attack on the World Trade Centre got the Americans so crazy for vengeance.

It's true that the Cylons pretty much succeeded in wiping out human life on the 12 colonies with their own weapons of mass destruction, but the analogy is not -- as I understand it -- meant to be an exact one: simply a good way of setting up a dramatic situation where one can examine at leisure the psychology of a particularly paranoid and inward-looking society at war.

The "remake" idea is an excellent one when it comes to protective camouflage. What harm could possibly come from revisiting kindly old Lorne Greene as Adama, and those two good old boys Apollo and Starbuck hotdogging around the sky in their Star Wars-knock-off fighters? That version was made back in the late seventies, when Vietnam had sickened the USA on real wars, and escapist fantasy westerns and space operas were the order of the day.

Is mine a reductionist reading? Possibly. I'm a big fan of the new series -- not (even at the time) the old one -- but what struck me about it from the first was the profoundly insightful line it took on military expediency and power-hunger.

It isn't just the black uniforms with silver highlights that make Lee Adama and the others look like a squad of young Fascists. Edward James Olmos's croaky, world-weary Adama is certainly no Hitler, but he might be a Rommel or an Admiral Raeder. Is there anything he and his friends won't do in the interests of survival? Adama's led a military coup against civilian government, ordered the assassination of a superior officer, connived at torture, the black market, the murder of civilians -- the list goes on and on. Some hero.

But it's all okay, because the Cylons are even worse. 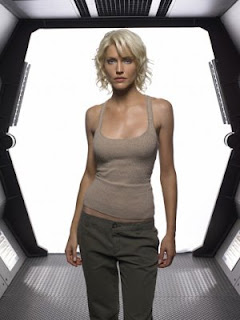 Or are they? The biggest revelation of the new-look series is the Cylons themselves. they look human. They look better than human, actually. The women -- Tricia Helfer (above), Grace Park (below) and our own ex-Xena Lucy Lawless -- are all babes and supermodels. The men, on the other hand, tend to take a bit of a back seat when it comes to decision-making. 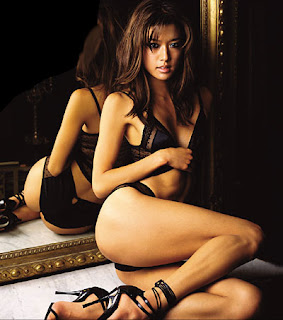 Gorgeous female robots are no new thing in Sci Fi, of course -- think of Metropolis or (for that matter) Blade Runner or Solaris. The interesting thing about these "skin-jobs" (or "toasters"- or any of the other loving terms applied to them by the freedom-loving colonials) is their obsession with theology.

Yes, you heard me right. The quickest way to spot a Cylon infiltrator is to lure them into a discussion about the existence of God and His/Her intentions for the universe. That's the true genius of this TV series. Who the hell came up with that idea?

The Cylons are strict Monotheists -- they're very impatient with the pagan superstitions of the 12 colonies (the planets were named after thinly-disguised signs of the Zodiac: Tauron for Taurus, Geminon for Gemini etc.). The "gods" whom Starbuck and the others repeatedly invoke are an early version of the twelve Olympians: Zeus, Diana, Apollo, Athena and so on.

Liberal Humanism versus Islam? The Colonials are a pluralist society, very like contemporary America. The Cylons, on the other hand, are made of sterner stuff. Philosophy, for them, is to be taken seriously. The basic issue for them, as Sharon-the-Cylon explains to Adama at one point, is whether humanity deserves to survive. The jury's still out on that one, I'm afraid.

As for Iraq, the evidence is all there if you want to look for it: torture in Abu Ghraib prison, the lynch-mob mentality of the fleet's civilians, the primitive glee that Apollo and the others take in killing (they do have qualms when it comes to destroying their own ships -- but they fade pretty fast when the bullets start flying).

It's not a programme which propounds easy solutions, but there at times when the cowardly, compromised, half-schizophrenic Dr Gaius Baltar looks like the only sane one aboard. At least he enjoys basic human pleasures: booze, sex, cards. He's smart, too, if a little eccentric. Compare him to the drunken buffoon executive officer Colonel Tigh, and it's hard not to see the dichotomy between the red and blue states of the USA condensed into one simple proposition.

Start watching it. I think you'll find it's worth it. Who would have thought the American mainstream media could be so intelligently self-analytical? 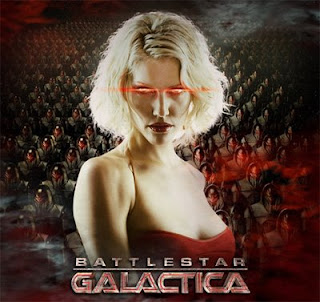 got to mention Starbuck/Katee Sackhoff. Maybe she isn't a popular addition when mentioned because her character isn't very "sexy" but I like her a lot.

Actually I think one of the most ingenious things about the programme is its ability to reverse our expectations. The "New Caprica" refugee camp plotline at the beginning of series 3 casts the colonials as Iraqis and the Cylons as American occupying forces. Suicide bombers and fanaticism are easily forgiven in Col. Tigh and the others because they're so like "us."

Starbuck has a particularly interesting role at this point, as she's forced to play the part of an abducted trophy bride. Her character gets more complex as time goes on, I think, far beyond the "out of the box is where I live" flying jock of the first series ... Yeah, I'm kind of a fan of Katee Sackhoff, too.

Excellent analysis - I'm just waiting for the surge! And blogging when I should be writing.

Yeah, join the club -- only in my case it's the fatal attraction of dreaming up yet another blog posting instead of marking that pile of essays .;..

I've seen a couple of episodes and have enjoyed the show. I just need to rent out the series and actually get time to watch it. I've only heard good comments about the show and I think that your post has talked me into making a commitment to watch. (I'm not good at following TV shows as I get too distracted.)

I wish I could say the same. There's so little on TV these days, though, that we've taken to watching old series straight through on DVD instead. It means you can properly appreciate the story-arcs -- in the few cases that really deserve it, that is ... Deadwood is another interesting case, but it merits even more detailed analysis.

I just saw that a book of papers on BSG has just been published:

editor C.W. Marshall (of the University of British Columbia) says, "I think we get a better examination of the psychology of what's going on in Iraq and Afghanistan in the science fiction setting than we do watching CNN."
Vancouver 24 Hours Tuesday June 24 2008 vol.4 no.60