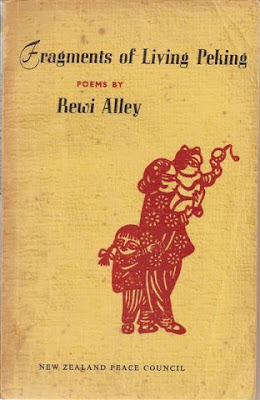 Since there was so much response to my post on Duggan's copy of Hopkins, here are some pictures of another, not dissimilar, find I made a couple of years ago in a second-hand shop in Devonport: 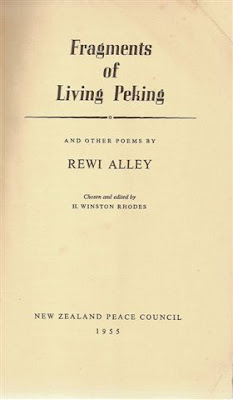 Once again, it was the book itself that attracted me initially, but then, looking inside, oh ho! 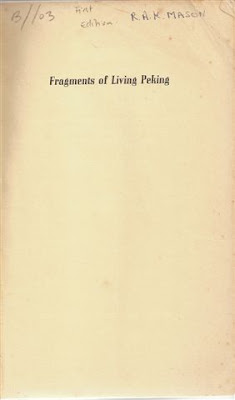 Could that really be R. A. K. Mason's signature? I knew he was pretty keen on China, but surely he would have had rather more flowing calligraphy than that? 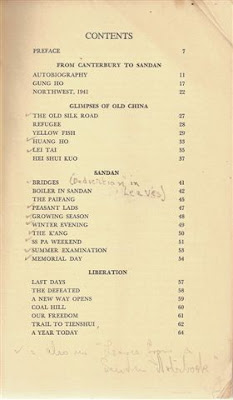 If it is him, then his annotations seem more bibliographical than interpretive in nature. He marks poems which can also be found in Rewi Alley's previous book Leaves from a Sandan Notebook (1950). 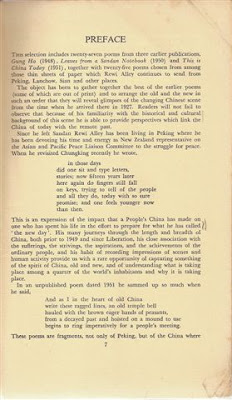 He does put a little mark by the passage in H. Winston Rhodes' preface recording "the impact that a People's China has made on one [i.e. Alley] who has spent his life in the effort to prepare for what he has called 'the new day'." This is Mason the committed Communist, remember, the author of "Sonnet to MacArthur's Eyes" ... 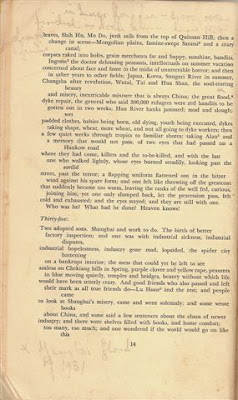 Besides that, most of the notes and marginal scribbles record pieces of factual information to be found in Alley's text, together with hints about places to visit. Mason did, after all, visit China "as first president of the New Zealand–China Society in 1957", according to his entry in the Oxford Companion to NZ Literature (quoted on the Book Council site), two years after the publication of this book, and so he was probably looking to Alley more as a source of information than of poetic inspiration. 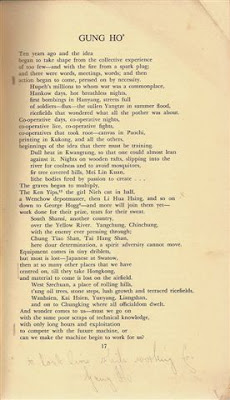 This isn't the place to go in to my views on all those pat judgments about the (alleged) "failure" of Mason's poetic gift - I put my opinion on record in a review of Rachel Barrowman and John Caselberg's twin, competing biographies in WLWE: World Literature Written in English (UK) 40 (2): (2004) [144-47]. Suffice it to say that merely keeping on churning out verses into old age can scarcely be regarded (necessarily) as being true to one's muse ... Mason chose a different path, but only a fool (or a dyed-in-the-wool social conservative) should feel him or herself qualified to write him off as some kind of failure. 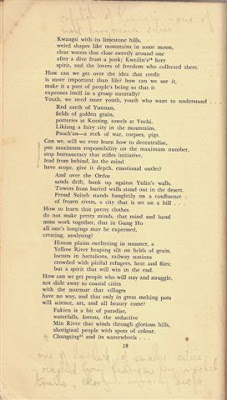 I guess what I like most about the book is the sense of Mason carefully preparing himself for his upcoming trip to China, eager to see the "new day" for himself, and probably equally keen to meet Rewi Alley, too. 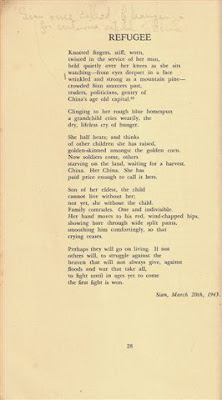 By now Alley had been forced to 'closet' himself again, after living pretty openly as a homosexual in his early years in China: the puritan new government of the People's Republic made this a necessity - as Simon Winchester records in his fascinating new biography of that other great friend of China, Joseph Needham (Bomb, Book and Compass: Joseph Needham and the Great Secrets of China. 2008. Camberwell, Victoria: Penguin Group (Australia), 2009). 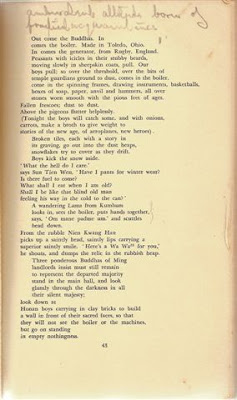 A wandering Lama from Kumbum looks in, sees the boiler, puts hands together. Says 'Om mane padme um.' and scuttles head down. [p.43]

Mason's note at the top of the page seems to read "ambivalent attitude born of practical acquaintance."

So do we start anew, with new wine in old bottles, as we have been taught not to do. Yet, is the wine so new? Perhaps it has just been mellowing these thousands of years, now is ripe for using ... [p.44]

There's something rather moving about these carefully marked passages, written long before the Cultural Revolution, the Gang of Four, and all the other great disillusionments really started to take their toll. As with Mason's career as a whole, I feel, it's best to listen patiently than commit oneself to hasty, pat judgments - "ambivalent attitude born of practical acquaintance", in fact.
Posted by Dr Jack Ross at 10:23 am

I'm not an expert on Mason, and don't have the Barrowman biography to hand, but it's tempting to see this interest in a utopian China as a response to the trauma and demoralisation that the Great Waterfront Lockout of 1951 caused the poet. If I recall rightly the trauma of having to deal with the human impact of the government's brutal treatment of wharfies and their families, and the demoralisation caused by defeat, threw Mason into a massive depression and saw him withdrawing to Matipo Road in your native Mairangi Bay, Jack, for months or years of gardening therapy. China must have seemed quite a contrast to New Zealand.

According to Barrowman, who is frustratingly short on information at times, Mason took over the NZ-China Friendship Society in the early '50s after giving the boot to a bloke named Leo Sim. If I remember rightly Barrowman claims that Sim had made the Society a fractious place by linking it to the ultra-left politics of the 'Fourth International', the collection of small dissident communist groups Trotsky had founded near the end of his life.

Sim was in the '30s a leading member of the pro-Stalin Communist Party of New Zealand. He actually travelled to Moscow in the late '30s to represent his party at a meeting of Stalin's Comintern, which claimed to be a continuation of the Third International Lenin had founded after the Bolshevik revolution. Sim split from the CPNZ after the beginning of World War Two - according to an anonymous official historian of the party, this was because he wanted to 'turn the World War into a civil war' in New Zealand. He founded a short-lived Bolshevik Party, which was based in the Wairarapa, and which produced a periodical called The Bolshevik. A single copy of The Bolshevik is preserved in the Turnbull, and it's a pretty unimpressive piece of work - brief, handwritten, fairly incoherent. Sim and one of his followers was sent to a prison camp for distributing the publication.

Unfortunately, Barrowman provides no more information about Sim and his supposed postwar alignment with Trotskyism. Conventional wisdom holds that Trotskyism didn't appear in an organised form in this country until the '70s. Perhaps, though, Sim ran a little postwar group which has escaped the attention of historians?

I agree about how frustrating the Barrowman book can be. As well as constantly hinting at things she doesn't discuss in depth (despite the inordinate length of said tome), she also has a very bad habit of embedding vital information - Mason's committal to a mental hospital, for instance - in the middle of vast, ill-ordered paragraphs, which makes it very difficult to use for reference.

Caselberg's book is even worse, though, so I guess we're stuck with Barrowman till something better comes along.

Oh, and her bibliography is very selective and untrustworthy, too. Despite Mason's small number of publications, she still manages to leave out some quite important periodical appearances.

I read books by Alley years ago -but as teenager I read Mason's poetry over and over again. I understood (the import of) his poem about McArthur but I didn't know much about the Korean war in those days. But his poems "haunted me like a passion".

I also have a drawing dad did about 1929 of him. On it he has written:

My father was interested in lectures by Sutch at the WEA and Mason's talks and his poetry etc but he didn't share his politics.

But his poetry (in the Pegasus book) I basically learned by heart. I also read most of T S Eliot's poetry in those days.

Smithyman said aloud (as if talking to himself) (tutorial for English I in 1968) words to the effect that politics had caused his poetry to stop.