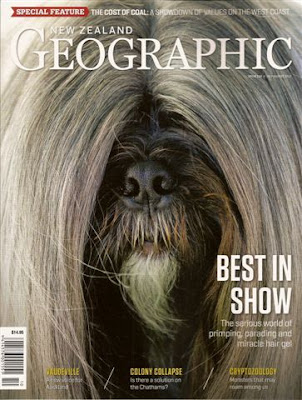 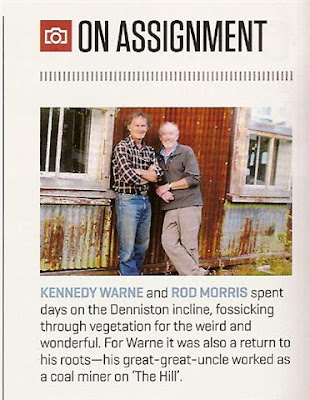 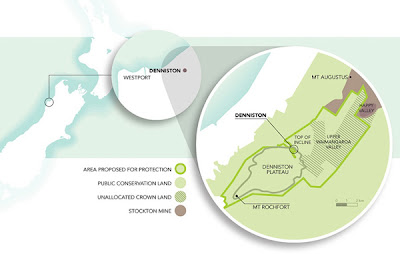 The plateau must not be destroyed! I'm looking forward to reading Leicester's article.

What can I tell you? The news is not good. I have to specify that there's not very much of Leicester in the article, but the whole thing is required reading for anyone who's ever spent time down there ...

The N.Z. Geographic on the Denniston plateau is fascinating. Leicester sent me a copy of his book in 2000. He was always rather jocular and sometimes dismissive about his role (about many things he wrote or did also): a sometimes "Post-modernist" (certainly a very subtle and original) poet and a retired priest (and a man with great interest in science), who claimed to be a South Island poet. He also commented to me:

Here is that small work I mentioned. It's constructed to convey information and elicit sympathy, which I think it does, [but the poetry] is of uneven quality. A few of the poems are very good, but another few are boring..."

He then comments that to put poetry "to work" (contra Auden's (sincere?)) "poetry makes nothing happen" is not traditional in NZ but is overseas.

At the time I marked the lines including:

"On this plastic pavement moulded by the thumb of God."

Which is one that Kennedy Warne quotes in his essay.

At the time I was looking for "poetic merit", and the subject didn't interest me quite so much. I also thought this wasn't his best book, and that it was rather occasional.

But on re-reading it, in the light of Warne and Rod Morris' (the photographer) piece in the NZ Geographic, I realised that as with most of Leicester's work it is very great poetry, of great skill and there is nothing boring about his book at all. The notes at the back are informative - a whole village (Stockton) was bought en passant so to speak by the multinationals (Bathurst Resourses and Solid Energy etc) who are ripping the guts out of the place to get more coal which they is of a very high calorific content, and will be used by Japanese and Chinese steel industries etc to smelt iron. [hence the issue has connections to and is maybe s important as the issue of the selling of NZ assets]. The editorial mentions this and the issue of global warming about which I have been skeptical.but that aside we have a real destructive, a devastating process happening here. Scott Hamilton of Reading the Maps should be onto this one. I intend to do something on my own Blog (I am going to make more than one as Jack has) about Leicester etc) as soon as I have my stuff organized here.

It is true that mining as such is not always "bad" (and for now the world needs steel) and Leicester also felt some ambiguity being in those protest things...at times he told me he felt a bit alienated as some of the miners and unionists weren't happy with him, others were in agreement more or less.

The Geographic piece also deals with the history of mining there and the views of some of the locals: many who are opposed but others are in favour as about 500 jobs will be created.

There certainly needs to be a national awareness of this event/issue. [It is not quite a fait accompli] I noticed in an old Lonely Planet book I looked at tourists are more or less persuaded to avoid that part of NZ! (It’s hard to get a detailed map of the area in question). I suspect that (not many) want to look at coalmines (especially if the issue is not clear and that nature of the (micro and macro) environment and ecology there is not highlighted as Warne and Morris have done so well). We do need coal that is true, but we need to be looking at less drastic measures and creative ways for energy creation & use.

[Fusion as against fission is one possibility, and some form of nanotechnology, and also improved electrical energy efficiency. I recall when I studied that subject that the transfer of electrical energy by magnetic induction is less than 1% of its potential. * There is also wind power. There are other ideas but this tearing into the ground without very very close supervision etc this opencast mining is madness. It is done for money of certain individuals only.

It is true that the industries involved do attempt to restore the environment and insects, grasses etc but more public awareness of what is happening there is necessary. (The rivers become very polluted [it is true that some already are without any mining at all due to the presence of coal strata]

Certainly the whole matter should be studied and debated on face Book, on Blogs, in the newspapers and else where (there was an article in a recent Otago Times)...


*There is limit (100% is impossible as are perpetual motion machines!) to the efficiency of all "machines" of whatever kinds: but I am thinking of ways to increase the efficiency ratio.

Here is link to the Otago News paper article