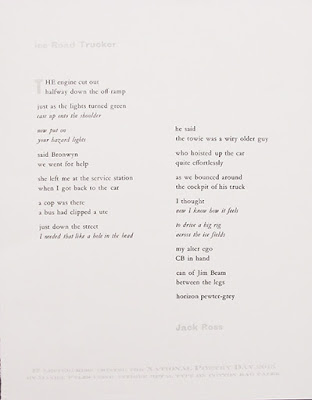 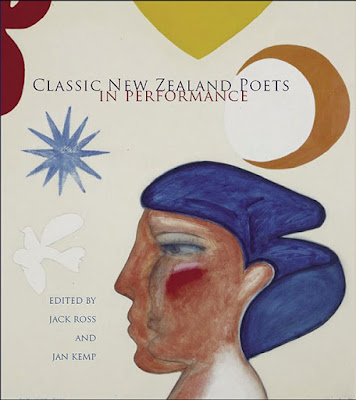 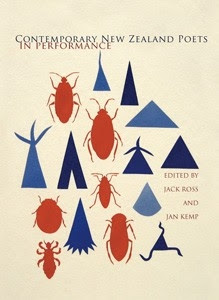 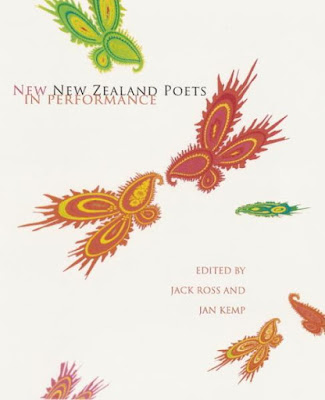 These CD and books you did with Jan Kemp are great Jack. I thought that of the one you were in, the most innovative (I don't necessarily mean the best) was your poems. I had previously felt you were sometimes too clinical and even detached, but I liked that and the poems you read on the Six Pack are very good. They all come over well. I haven't had time to listen to the others....but back to the CD you were on, there were a lot of poets I liked on there, and many read well. But what I liked was your formal innovation (so it helps in those cases to see the poems or know about the layout if that isn't possible and I know it is for some). I suddenly got a sense of what you were doing with contrasting and linking small texts...one I also saw I think in Brief or was it on a CD (?) where you mixed things: some philosophy connected (somehow) to your own (your own?) experience going into a small jail where the convicts had been (in Tasmania).

All the best for the New Year!

And a very happy New Year to you also!

I think the poem you're talking about is one called "Antigone," which was in the last percutio (issue 9, I think). Actually, Bronwyn's just made it into a kind of chapbook / poster (you can see the link here [http://mosehouse.blogspot.co.nz/2015/12/special-edition_21.html]).

Thanks for your comments about the recordings. I share your sense that it's useful to see a written text as well as hear a poem sometimes, but it's nice to hear that something is getting across from them.

Really enjoyed your review of Ken's book, by the way: very thoughtful and insightful, it seemed to me.

I think those recordings are good. I like following the text on the page and then listening to the poems.

Thanks re Ken's book. It was a big ask, I had to work on it. But Ken spent a long time on it. I was looking back at it a few days ago. It is worth people reading or at least buying, to support a certain kind of NZ writing. Ken is quite unique for sure. It is a unique book.

I am making my way through the latest PNZ review and enjoyed (amongst much else) the essay about prose poems which directed me to some very good NZ poets I knew nothing of, although I did have the book referred to by (the US poet) Hass('Human Wishes'). I don't think I had got around to reading it, so that was good. Also the poets Hera Bird and Zara Butcher-McGunnigle. It is a great essay by Janet Newman.

Just read a couple of good poems by Rapatahana.

What next? I liked (again there is a lot of good stuff, as there was in the previous issue and both guest poets are good for different reasons (diff. styles).

Geraets is also always interesting and enigmatic poetically and in his essays.

But there are many others...