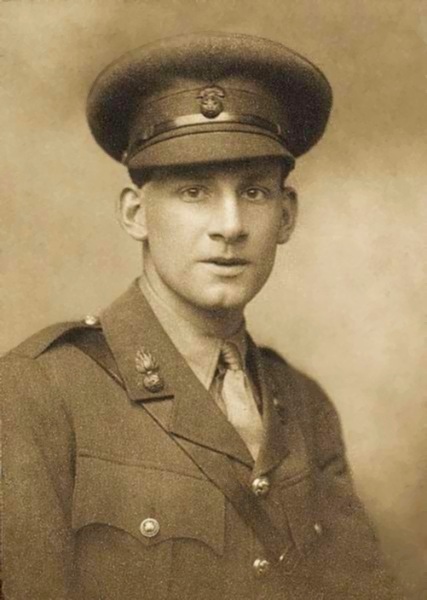 
A visitor to the house once asked me why there was so much war poetry in the bookcases in the living room: more specifically, why there were so many books by Robert Graves, Siegfried Sassoon and Edward Thomas, and nothing by Wilfred Owen, who is generally regarded as the pick of the bunch? I had to admit she had me there. Why wasn't there any Wilfred Owen? I've since repaired that omission, but it's interesting to me (at least) that it occurred in the first place.

I wouldn't say that I was exceptionally keen on war poetry. Certainly I've read all the usual suspects, and have a number of books on the subject, but it's not really one of my absolute areas of fanatical interest. I do love Edward Thomas, though (as my previous post on the subject should testify). And my fascination with the strange reaches of Robert Graves's imagination remains unabated. Why so much by Siegfried Sassoon, though? 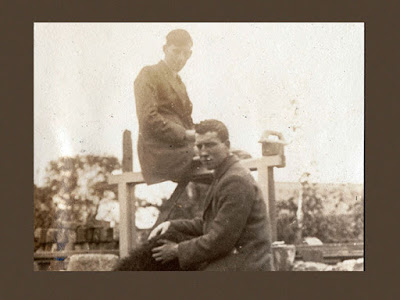 
Just about everything to do with the First World War is - quite naturally - very much in the news at present. I've supplied my own tentative bibliography of the subject here. I find some of Sassoon's war poetry as powerful as any ever written: "Base Details," for instance - but also 'Everyone Sang', which is just one of those perfect poems which come out of nowhere sometimes. Not out of nowhere, really, when one comes to think about it: out of four years of suffering and pain and loss of innocence and meaningless machine-age slaughter.

I'm not sure that he's really received his due as an autobiographer, though. Everyone knows Memoirs of an Infantry Office (1930), and most people are aware that it's part of a trilogy, The Complete Memoirs of George Sherston (his imaginary alterego). But how many readers go on to his second, more directly autobiographical trilogy, The Old Century (1938), The Weald of Youth (1942) and Siegfried’s Journey, 1916-1920 (1945)? And yet it's every bit as charmingly and precisely written, and perhaps even more evocative of the vanished world before the bombardment (in Osbert Sitwell's phrase). 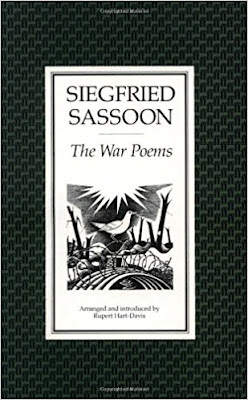 
Six prose memoirs is quite a substantial legacy. And when you add in the posthumous publications: Rupert Hart-Davis's beautifully crafted collections of War Poems (1983), together with three volumes of diaries (1981-85), not to mention Paul Fussell's elegant illustrated edition of the Sherston Memoirs, Sassoon's Long Journey (1983), he begins to look even more substantial. 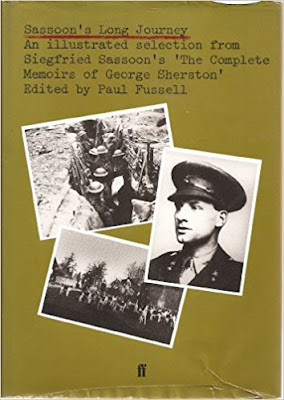 
Like Graves, he did have the advantage of having survived: not through any want of trying to get killed on the part of either of them, mind you. For all the editing and re-editing, Wilfred Owen's legacy remains fragmentary and thwarted because there is (comparatively) so little of the harsh, late war poetry we all admire, and so much of the flowery, fulsome pre-war poet. The fact that almost all Owen's surviving letters are addressed to his mother doesn't help, either - and nor does the fact that most of the biographical information we have about him comes through the filter of his rather jealous brother, Harold (himself a most accomplished memoirist). 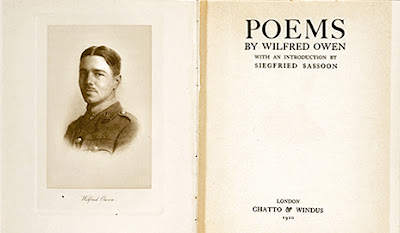 
But what is it, finally, that explains my rather compulsive collecting of Sassoon's books? They are very beautifully produced and designed, of course: fine Faber layouts on pre-Second-World-War paper, for the most part. To some extent it's because of the sidelights it throws on Graves, who remains my main man in the field, I must confess (despite the comparative weakness of his own war poetry: his heart was never really in it like Sassoon and Owen). 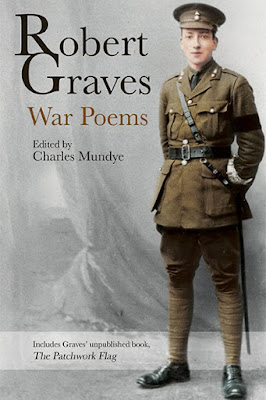 
I suppose, to some extent, it's because his work shows just how much can be accomplished with limited talents if you similarly limit your objectives. Graves was a far more unruly genius than Sassoon, but did he ever write anything as moving and perfect as the Sherston memoirs? I suspect not. Owen proved himself a far more gifted poet in the few months of mature work he was able to complete, but it was Sassoon who liberated him from his Georgian shackles, encouraged his work, and put up with his adolescent hero worship.

What's more, if you actually sit down and read a collection such as Counter-Attack (1918) from cover to cover, I think you might find it hard to sustain your belief in that label of "minor poet" which now hangs around him. It's a pretty powerful book, with poem after poem on its pages destined for immortality. How many other poets of any era can say the same? 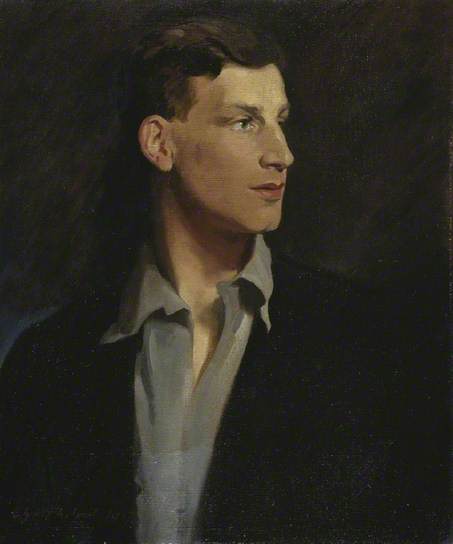 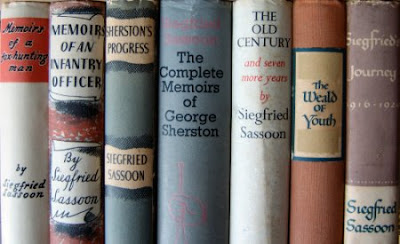 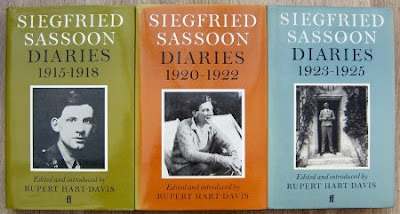 Interesting. I forget if I have read a poem by Sassoon. I have read Rosenberg, some Gurney, David Jones (via his In Parenthesis which I see as a poem) and Brooke. I like some of Rupert Brooke's but of course he never saw combat. I must have read some Sassoon.

But I read Pat Barker's 'Regeneration Series' which I liked a lot. Graves I haven't read much of. Leicester liked his 'Goodbye to All That' which I have so I should have a look.

I'm sure I read him (Sassoon), but probably within collections. I was impressed that he won an award for bravery and then went to protest the war, then returned to the war. It is all bizarre. A terrible war. We need to forget it now it is 100 years ago. Perhaps get worked up about the NZ Wars or the Pelopnnesian Wars....I think the war mongers and the RSA milk all these wars. They dream of more wars. They love wars these crazy RSA warmongers and ANZAC fanatics.

PS I have become fascinated by the work of Mina Loy who I had heard of but only now have been able to read. Do you know her work. She was an eccentric like Laura Ryder (who connects to Graves of course, but I find her poetry, not always, but often rather obscure. She (Ryder) wrote some mysterious stories though..)....But Mina Loy was mentioned (quoted in part) by Brentley Fraser in the book I reviewed, and it piqued my interest in her.

I do have a copy of a Mina Loy book: The Lost Lunar Baedeker, it's called, I think.

I must confess I haven't read it, but looking at the online reviews makes me wonder why not - it sounds pretty fascinating. Thanks for the tip, Richard.

I had heard of her but when Brentley Frazer mentioned her in notes to his book I realized also that I hadn't really read her [she is in Rothenburg and Joris' two vol. 'Poems for the Millenium' which I have but I want to get the edition I have called 'The Last Lunar Baedeker'. I wrote out all of her poem Love Songs to Joannes. I have to say that like (apparently Pound and Eliot who liked her and Moore) (Pound used the term Logopoeia for esp. Loy I think) I was baffled. But on YouTube there is a lecture on it. I starts with what looks like a student talking, then switches to the lecturer. Then it starts to become clearer and you will be interested in the connection to your other favourite (I like it also) The Golden Ass -- that is the Cupid and Psyche legend which I am just now re-reading. )I should re-read the entire book as it is good.

What annoys me in way are two things: 1) like failing to solve a chess problem I feel I could have had I spent more effort and time on it 2) the exposition is good but it spoils my love of things simply being made of words a la Mallarme (more or less)!

But she was very clever. The large Lunar Baedeker has images by Loy and so on. But while say, Celan I found hard to engage with (I did with certain poems) I immediately 'connected' with Loy. I found it comical at first then just fascinating. Now I am seeing method in her 'madness'. You'll becoming a Loyia-Biblio-ologist which will add to your Arabian Nights Epic bibliology!!

[Reason I tend to avoid NZ books, somewhat: I would have double the number of books, as I know the more I got into it all the more I would acquire and would want more. I DO have a respectable NZ section but I have to stop....Why is it, for example, I kept about 10 of Keneally novels when all I have done is to watch Schindler's List? Because I thought I might one day want or 'need them'....It is a worry.]

But Loy seems, if the lecture is good, to be 'about' more openness in relationship and despite some 'craziness' she seems to have an enlightened view of this business men and women which chimes with the confessional thing as she deals with it in a strange mix of method and madness (poetic 'madness'). So that you can read her Joannes love thing just as it is without understanding it as such. But she also, in her life, wanted to be at the front. She envied men that they were in that combat zone (I don't think she was naive although most people were until they entered combat zones) but she was trying to say something about the struggle and she also reacts to Futurism, accepting some ideas and rejecting others. Marinetti was one of her lovers. So she is certainly interesting and the writing I find vital.

Get a student of yours to do a PhD on her!