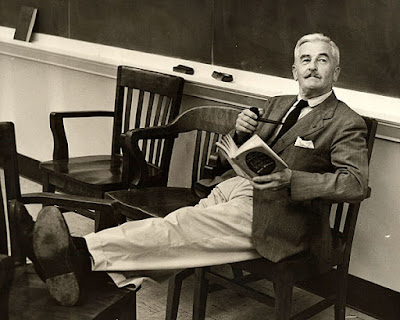 Faulkner in the University


I guess that's a bit of a test, actually. What do the words "Yoknapatawpha County" mean to you? If the answer is not a lot, I suspect you're not alone.

What they should mean, of course, is ground zero for William Faulkner's fictional universe of decaying Southern Colonels and pushy rednecks in the fever-drenched woods and swamps of Old Dixie.

I've just finished reading Joseph Blotner's immense, two-volume life of Faulkner, which seems at times to aspire to chronicle every day of his life in full detail. 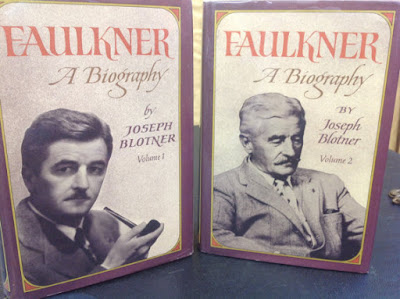 
Blotner does his best to soften Faulkner's reputation as a hopeless drunk and ne'er-do-well ("Count No 'Count," as some of the locals used to call him), and points out the immense industry and craftsmanship that enabled him to churn out 19 novels, 2 poetry collections, 5 collections of short stories, and 125-odd short stories in forty years of writing.

Nevertheless, Faulkner was definitely a bit of a wild card - prone to sitting for hours in complete silence, suspicious of strangers to an almost paranoid degree, and generally "not a tame lion" (as people keep on remarking of Aslan in C. S. Lewis's Narnia books). 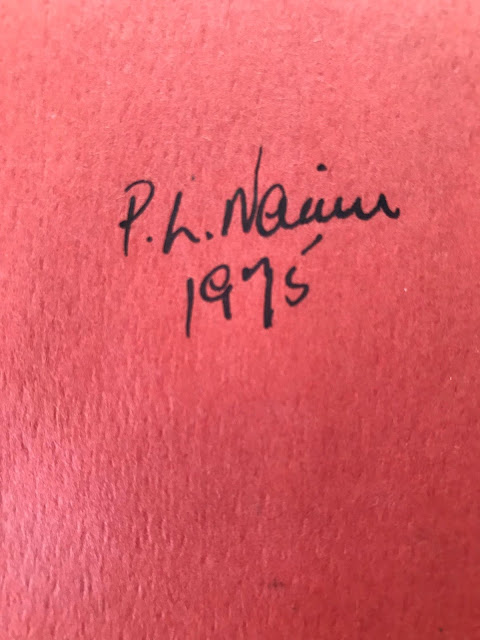 
My own copy of Blotner, bought second-hand sometime in the 1980s, is clean and unannotated apart from a few interesting inscriptions on the fly-leaf. I thought I might share these with you in the hope of further elucidation of just what "P. L. Nairn [?: Nairne? Napier?]" may have meant by them. 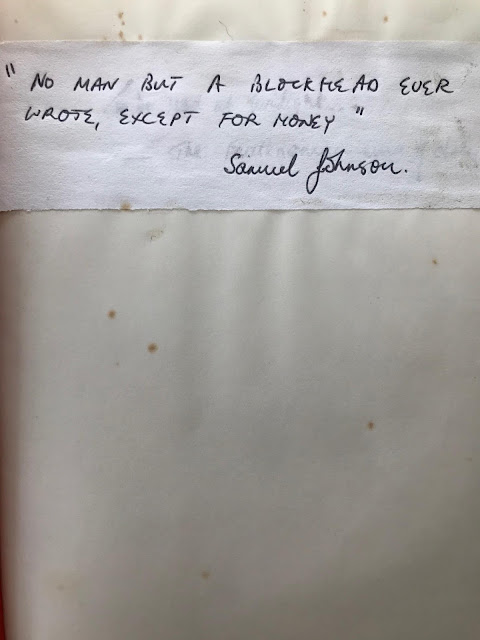 "No man but a blockhead ever wrote, except for money"
- Samuel Johnson

That one seems pretty self-explanatory. One constant theme in Faulkner's letters and daily life is the endless need for money. Selling short stories, selling movie scripts, selling anything that moved in order to maintain his beleaguered Southern Mansion Rowan Oak is a constant theme. This tails off a bit after the award of the Nobel Prize (most of which he actually ended up putting in trust to help other writers: particularly African American ones - which goes some way to giving the lie to his alleged racism), but by then the royalties on his books had begun to grow more substantial, in any case. 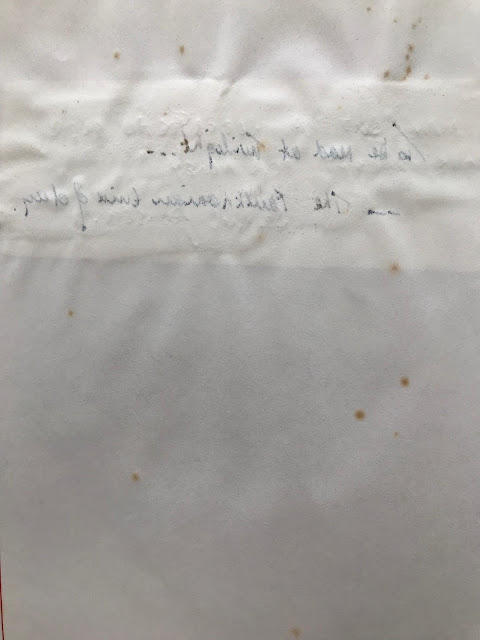 
What interests me most about this motto, however, is the fact that it's written on a separate piece of paper which has been pasted in over another inscription. One can just dimly make it out if the page is held up to the light:

To be read at Twilight ...
- The Faulknerian time of day. 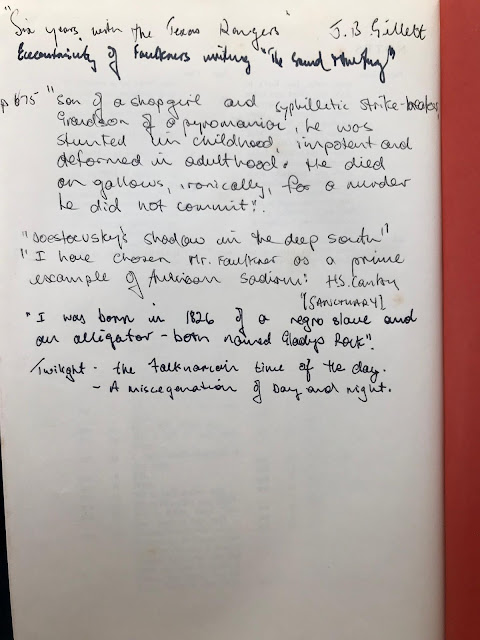 Blotner, vol. I: back flyleaf


It's not till he gets to the back of the book that he really lets himself go, however:

"Six Years with the Texas Rangers" J. B. Gillett

Towards the end of 1925, Faulkner's friend Phil Stone lent him a number of books (listed on p.489 of Blotner's biography): "As a change of diet from poetry, perhaps, he lent his friend James B. Gillett's Six Years with the Texas Rangers." Interesting? Not to me. It clearly was to P. L. Nairne, however.

Eccentricity [?] of Faulkner's writing "The Sound & The Fury"

Roughly 35 pages (pp. 564-98) of Blotner's biography are devoted to the ins and outs of composing The Sound and the Fury, universally agreed to be Faulkner's most dizzyingly experimental piece of work, and regarded by most (myself included) as his masterpiece. Perhaps this is a reference to that strange ordeal.

p. 675: "son of a shopgirl and [a] syphilitic strike-breaker, grandson of a pyromaniac, he was stunted in childhood, impotent and deformed in adulthood. He died on [a] gallows, ironically, for a murder he did not commit."

This is a quotation from Blotner's summing-up of the character Popeye in Faulkner's 1931 novel Sanctuary. While perfectly accurate in context, it does sound a little bizarre taken by itself.

"Dostoevsky's shadow in the deep south"

This is the title of one of the reviews of Sanctuary, mentioned on p. 685 of Blotner, along with the following quote from Henry Seidel Canby's article about the book in the Saturday Review of Literature:

"I have chosen Mr. Faulkner as a prime example of American sadism: H. S. Canby [SANCTUARY]

And so we come to:

"I was born in 1826 of a negro slave and an alligator - both named Gladys Rock."

This is a straight quote from an interview Faukner gave to a reporter called Marshall J. Smith in 1931 (Blotner, 694). He went on: "I have two brothers. One is Dr. Walter E. Traprock and the other is Eaglerock - an airplane." Walter E. Traprock, as it turns out, is the pseudonym under which George Shepard Chappell published a series of parody travel books: The Cruise of the Kawa: Wanderings in the South Seas (1921), My Northern Exposure: the Kawa at the Pole (1922), and Sarah of the Sahara: a Romance of Nomads Land (1923) among them. Faulkner was in fact the eldest of three brothers. The youngest, Dean Swift Falkner (the "u" came later), was killed in an airplane crash in 1935. His eldest brother Bill had bought him the plane, as well as teaching him to fly it. Connections! Connections everywhere, from what I can see.

Twilight: The Faulknerian time of the day.
- A miscegenation of Day and night.

This appears to be another version of the obscured quotation at the front of the book, tidied up a little and with the addition of the "miscegenation of day and night" conceit. I'm not sure that it's a particularly happy one.

Interestingly enough, it's the Dostoevsky quote, above, which seems to lead in the most promising directions, witness the following passage on p.716 of Blotner's first volume:

When the [student] reporter [from College Topics, at the University of Virginia, who knocked him up in his hotel room at midnight in late 1931] raised the question of technique, Faulkner talked about Dostoevsky. He could have cut The Brothers Karamazov by two thirds if he had let the brothers tell their stories without authorial exposition, he said. Eventually all straight exposition would be replaced by soliloquies in different coloured inks.

It's a well-known fact that Faulkner believed that Benjy's monologue at the beginning of The Sound and the Fury - literally the tale referred in Macbeth's famous soliloquoy as: "told by an idiot" and "signifying nothing" - could be straightened out most easily by the judicious use of coloured inks.

He was eventually persuaded (reluctantly), that this was beyond the printing technology of the time, but he never stopped hankering after it. The proposal of a limited édition de luxe in 1931 brought the idea to life again, and he sent in a complex scheme of three coloured inks to the printers, who had to abandon the notion, unfortunately, due to the damage to the book trade caused by the Great Depression. 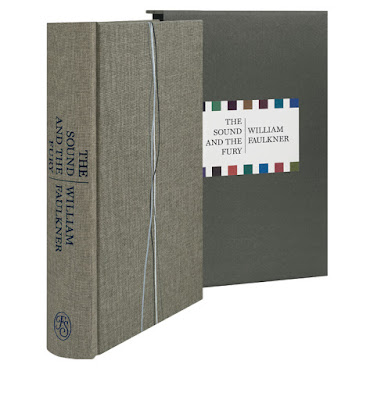 William Faulkner: The Sound and the Fury (Folio Society)


You can't keep a good idea down, though, and in 2012 the Folio Society in London actually published such a book: with a full commentary on the text and a complex battery of no fewer than fourteen different coloured inks! 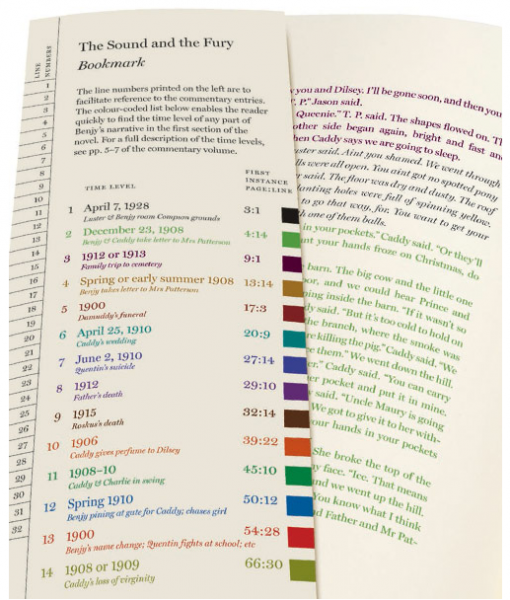 William Faulkner: The Sound and the Fury (Folio Society)


There's a great deal more to be said about Faulkner, some of which I aspire to include on this blog at some point: his immense influence on such Latin American "Boom" novelists as Carlos Fuentes, Mario Vargas Llosa and Gabriel García Márquez, for instance.

For the moment, though, I'll simply note here the recent completion of the Library of America's five-volume edition of Faulkner's complete novels, all in their revised and "corrected" texts: 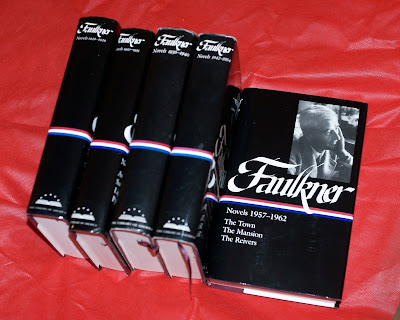 Here's a listing of my own Faulkner collection. Not complete, certainly, but with most of the books that any but the most abject collector would consider to be indispensable to a close knowledge of the subject. Enjoy! 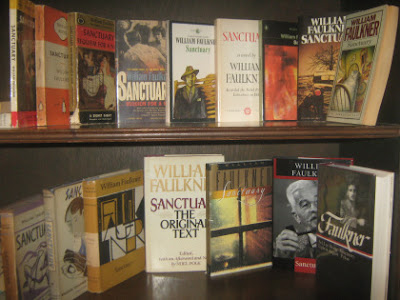 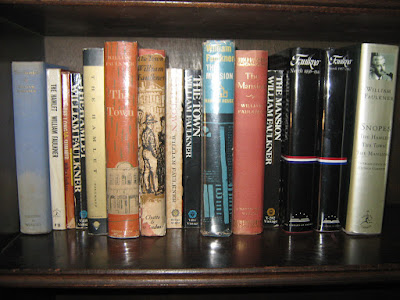