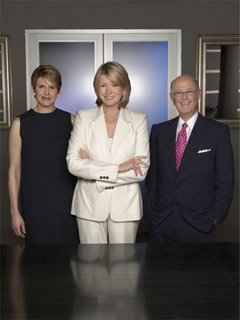 So said the man showing the successful Apprentice contestants around one of Martha Stewart's weirder country houses on TV2 last night. This was their reward for selling more garden hoses than the other team had sold portable air pumps.

"Martha's the biggest animal-lover you can imagine," he continued to gush as he ushered them past a succession of immense stuffed fishes plastered all over every available wall. She loves 'em, all right -- especially stuffed.

The colours of the whole house were based on this fish motif, apparently, because Martha's "really into monochrome design" -- she likes painted ceilings; she got the colour for the wall from an old faded print (it looked a bit like it, too) ... and so on and so on and so on.

The progressive deification of celebrities has reached frightening levels on this spin-off of Donald Trump's presumably deliberately absurdist The Apprentice. One begins, finally, to get some inkling of what the Romans felt inside while worshipping their emperor as a living god.

Marcela gushed on and on for minutes about what it meant to her when Martha deigned to lean over and sample a bit of her sugar bun at another reward ceremony (breakfast at another of Martha's ghastly vulgar over-designed pads). "It was so intimate," she explained, "sharing a moment like that." Martha Stewart taking a piece from one of the very pastries she herself had (allegedly) baked ...

The funny thing, of course, is that the programme completely tanked in the USA. Martha was seen as wimpy and insufficiently decisive, and Trump had to tick her off for damaging his franchise.

One can see why it failed -- all the mad antics of the various performers fail to explain why any of them would want to work for Martha. Her "business strategies," as outlined in a series of excruciatingly banal inserts, consist of revelations along the lines of "Buy low, sell high." Last night she solemnly informed us that doing a good sales pitch involved trying to make your words reach your audience in order to promote the product you wish to sell.

What's next? "Speaking is when you open your mouth and words come out of it ... if you choose the correct words, then people sometimes understand what you say. On the other hand ..." Perhaps that's a little too philosophical for Martha.

The whole jailbird thing is adroitly mixed into the combination trainwreck / history lesson that is Martha Stewart: The Apprentice. Roundly rebuking a "quitter," Chuck, on an early episode, she declared: "I've never quit anything in my life. I even went to jail, for God's sake ..."

Funny, she almost sounded like Gandhi there for a minute. He went to jail to fight for the independence of his country; Martin Luther King went there to agitate for civil rights -- but Martha went to jail for a far higher cause, her own sacred right to party. Why shouldn't she play the market, do a little insider trading? They were her stocks, after all ...

The bitching and moaning in the loft has reached the usual poisonous levels familiar from earlier incarnations of this programme (in its various Trump avatars), but once notices that Martha's wisdom and mana remain beyond criticism. To question that would be indeed to sin against the holy ghost.

Martha's poor long-suffering daughter, who sits there week after week biting her tongue and looking as if she might have a thing or two to report about her mother if only she were given free access to a camera (and had a fully-fuelled jet ready to whisk her off somewhere beyond the reach of the Martha Stewart goon-squad immediately afterwards), is the final bizarre ingredient in the mix.

It's a stuffed program. We all knew that going in. What's refreshing and wholesome about the Martha Stewart "reality" show is that it actually failed. Apparently there's a moment when people have had enough of toadying and grovelling to this repulsive saccharine-scented bully. Maybe quite a few of us actually do notice the difference between Paris Hilton and a singer (or a celebrity, for that matter).

I agree it's not a lot of hope to hold out, but it's something, at least.
Posted by Dr Jack Ross at 9:05 am

Jack - sorry but my comment is going to sound rather inane - I expect 'everyone else' knows who these people are but I don't know any of them - who are they? - are you talking about film stars?

I am not interested in these people (if you are) as these 'stars' (I hate them) -in my view are mostly very hollow people - a lot of them are worse than hollow - they are evil even - I see they have something about Paul McCarthy and so on on TV - I am completly uninterested in him. (I always found the Beatles music to be very simplistic and at best inane - however I have a dim view of most pop music and culture). (I know the post modernist views etc and I agree somewhat but I am not in that kind of a mood).

The US especially seems to have produced this kind of - this strange almost psychotic nation that is corrupt and violent and criticises other countries for developing weapons to defend themslves against them (and they themselves have created the fear that produces the 'monstors' they then tell everyone they are afraid of and this process spirals) (when they have millions of the same weapons) - I see the US as a dangerous fascist country - but it is a kind of surreal fascism. Where you can say what you like and no one takes any notice so there may as well not be any democracy or "freedom" as the rich rule - not only the minds of the people but the state itself. (Orwell and Kafka et al come to mind here...). And where telvision and film etc rules peoples' minds and mostly assists the fascism.

If I get the gist of what you care saying right - it is as if Nero was in charge of the West and various other maniacs are running the rest of the place. None of it really matters - that is why we do poetry and art - these are highter things that will last. Conceptualy at least - it doesn't matter if are all immolated somehow as we are all going to die anyway - so I am very happy! I have "ceased to care" -

But keep on blogging - when you win a big poetry prize or get a "name" like Silliman you will get lots of people reading your Blog. Now THAT kind of fame and kudos and recognition / respect etc is based or would be based on real talent - most of these "stars" etc (in contrast) lack real ability. If they are "sexy" and stupid that is good enough for pepe - who become fixated on someone esle besides themslves and hence do nothing much with their own lives - live through others - ('The immense tragedy of the peasant's bent back -' at least Pound had a passion) ..nothing fundamental ever changes (re-read King Lear)(not "you" -I am being rhetorical) in the world -but in the world of art - high art -real depth is produced. Think of Bach -

(cf to film stars of today or "pop" stars)

- he was hardly known - that is good.

"Understand the weapon -- understand the war." That was Jophn Cornford's dictum from the Spanish Civil War. TV is influential to a degree it's difficult to exaggerate. People watch it rather than living -- without understanding that, it's hard to make any sense at all out of postmodernity.

It's not cynicism that makes me want to engage with the larger implications of Martha Stewart (google her and see the three trillion sites that come up ...) Understanding the weapon is, in this case, I believe, our only hope.

I know you are not cynical (being self-interested is not the same as cynicism - it is essential (or at the least it is very healthy) to "push" oneseelf)(what happens to film stars etc is they get sucked into what I feel is a kind of terrible machine - poets can keep to one side of that..) - I never doubt your integrity. (Sometimes I think you are too concerned about these things - but I know where you are coming from).

Just at the moment I have great temptation to dive away from it all.

Understand the weapon - yes.
I think we agree in most areas - but not in the details.

Re fighting for freedom a la Cornford and Orwell* etc - for me that is always a job for someone else -that may sound cynical but ther can always be found someone who is "brave" and wants to rush off to war to save the world - so there is no need for me to get hurt myself - someone else can do it for me).

Here some aspects or ways of twisting postmodernism or philosophy come to my rescue!

Postmodernity I was suggesting -nothing new here- is a double-edged weapon - Foucault is able indirectly to attack the "system" (even if all his premises are not "logical" (logic per se can also be a negative weapon)) but in some interpretations - what I understand of Baudrillard is either a cop out or it is illuminating...Derrrida is so complex as to be ambiguous - but I am not an expert in these people - they are all good: a counterweight to say - well certain Marxists or "Positivists" or whoever - I hadn't read any Chomsky. He seems very astute - I am going only by the video clips on Scott's Blog.

But I recall Kendrick Smithyman commenting on how Mason stopped writing (much) poetry after he became political...this was (in 1968) before I got caught up in political stuff myself the next year. Now I am thinking of Yeat's poem (line of a) - "The best lack all conviction/and the worst are full of passionate intensity" (however it goes) - a bit too tidy perhaps but memorable and quite insightful - if a bit dubius outside the poem.

And Scott once wondered - half to himself if Smithyman really cared about people. The thing is - how much do we actually care about anyone apart from ourselves?

My friend Jim "The Ant" Dollimore believes Capitalism is great stuff - that it will gradually get better (everywhere) as science spreads its benefits and advances & technology reaches more and more people - hence we dont really need to worry about much - but we do have to attack terrorism so he supports the US and Britain in Afghanistan etc. What do you say to him? ...(He doesn't use a computer). His view will be quite common amongst many Liberals. ('Islamo-fascism' is a favourite word of his).

*Cornford etc aside - to have the ethical attitude that it is right "save humanity and so on" doesn't mean one has to do anything. lack of action therefore is not thus immoral - however 'morality or integrity' is defined.

I think this topic is very different and there should be more pages like this,Your comment has a lot of truth to it, and I'd like to invite you to visit my page:
10/325-
Vicoprofen - Lortab- Tylenol
#3- Ativan
All Major Medications are available right here at: http://www.crdrx.com

You're a spammer, aren't you, "vicoprofen"? I thought I'd got rid of the likes of you by turning on the word verification, but apparently you've found a way around it -- how very ingenious of you.