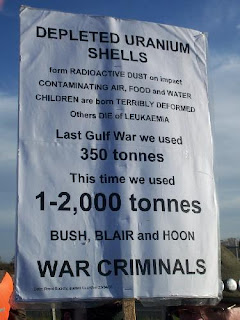 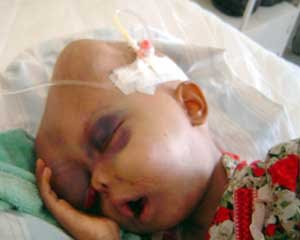 The real damage will have been done by then, though. It appears that this genetic damage can stay in affected populations for generations. "Gulf War Syndrome" (so-called) appears to have been caused by it also. Anyway, check it out for yourselves - this might be a good starting-place - and whatever you do, don't go poking round any recent battlefields in Iraq or Yugoslavia. Landmines are not the only perils we've left behind.
Posted by Dr Jack Ross at 10:51 am

Jack - to add to what you are saying here -

John Pilger writes about this in his book "The New Rulers of the World" and also on the illegal embargo of Iraq (it contravenes the UN laws) which mean that Hospitals in Iraq couldn't work at all well (in fact they went from very advanced to primitive becasue of a lack of medical and other supplies) - in fact it caused many deaths - during the period bewteen the two Gulf Wars. Meanwhile the British, the US, and the Turks bombed Iraq . The Turks especially targetted Kurds - this is a part of what has contributed to the myth that the Iraqis killed many Kurds - apart from facilitating such "targetting", the US and British military etc have always targetted civilians - e.g. in Korea. I have read a book on this, but not only that, by a circumstance (and a chance conversation I overheard) I can explain - I have corroborating evidence from a British citizen with whom I worked once (who was in Navy on an aircraft carrier during the Korean War)* that the description of the US bombing hositals and repeatedly targetting civilians in Korea was quite true.

It would be remarkable if that policy had changed one jot in a few years. This corruption and coercion and invasion of Iraq since the 1980s is a war crime or crimes on a huge scale.

*BTW he is or was not a "left winger" - quite the opposite.

And the world is silent! There are many people who believe in justice and what is right. Many people in positions of power who believe that these things ought not happen. But if they (and we) continue to shake our heads in sadness and do nothing, evil will continue. Those who believe in what is Right have a duty to act upon it. May Thoreau rest in Peace. How few are the Thoreau's of this world!
Thalia Arawi

Your words shame me (as I guess they're meant to do ...) Yes, we talk on and do nothing. Where are our Thoreaus, ready to go to prison to fight monstrous injustice -- slavery in his day, poisoning the earth in ours?

I have to commend the activists who called attention to the the dubious presence of the American tracking station on our soil, at Waihopai, the other day: I'm talking about Brother Peter Murnane and his collaborators. I've met him, and know him to be a gentle man of principle. I'm delighted to see that he's such a man of courage as well.