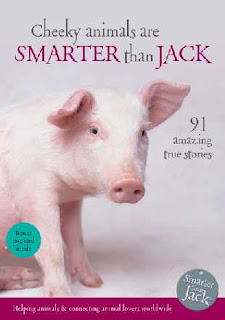 Well, I guess it's true: cheeky animals are smarter than Jack. It kind of goes without saying, really. But I'm not entirely sure that I welcome the advent of a whole series of books reinforcing the fact.

What I'm curious about, though, is: Who is this Jack? I mean, I've looked in vain through the publicity material accompanying the series for the least reference to the original Jack. Is it simply meant to be a generic masculine appellation: Jack & Jill, Jack the Giant-killer -- the ubiquitous hero of so many nursery rhymes and folktales? Or is he some actual person (or animal, for that matter? Probably not, given the fact that so many other animals have been proclaimed to be smarter than him).

One thing's for certain -- he's male, and he's constantly being outsmarted. Which brings me to the real subject of this post.

I was all set to go along to the beach to read out my poem from the volume above, Poetry Pudding, edited by Jenny Argante and published by Reed earlier this year. There was a big launch party planned on Long Bay beach, with kids and party games and (I hoped) parents waiting in the wings to control their unruly offspring.

All set to go -- but then I checked the time. Not Sunday afternoon, but Saturday afternoon, 28th July 2007. So I missed it. Animals really are smarter than Jack.

So I've decided that the least I can do is to repent in this public forum, remind you that it 's now on sale in bookshops (or, alternatively, from the Reed website here), and to reprint, as a kind of teaser, my own poem from the book. Sorry, Tania:

My name is …
John Carter, Warlord of Barsoom X
I live in …
The Fortress of Solitude X
My father is …
a barbarian chieftain from the Plains of Leng X
My mother is …
a slavegirl from the Mongolian steppes X
I have 100 sisters and no brothers
save for the heads impaled atop my tent X
This summer I …
set out to pillage all the known world X
It was …
very easy X
My teacher is …
a dog whose last words will be screams of pain X !!
My best friend is …
my mighty two-handed battle-axe X
My classmates are …
dust beneath my chariot-wheels X
I like to …
ride like the wind on my 8-legged steed Thorondor X
When I grow up I want to be …
a vengeful ghost X

This silly work is becoming increasingly typical of you, I’m afraid. You know you could do far better if you tried.

You big fat liar! I bet you fifty bucks that you chickened out after reading all that stuff about "getting the kids quiet on the mat" in the original invitation ...

Prove it. Where's your evidence? Who's to say it wasn't an honest mistake?