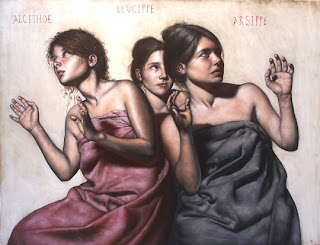 
The daughters of Minyas impiously reject the cult of Bacchus. To pass the time as they work, they tell the stories which take up the first half of Book IV: one of Ovid’s ‘framing’ devices ... (Melville, 395)

The Daughters of Minyas transformed

The tale was done but still the girls worked on,
Scorning the god, dishonouring his feast,
When suddenly the crash of unseen drums
Clamoured, and fifes and jingling brass
Resounded, and the air was sweet with scents
of myrrh and saffron, and – beyond belief! –
The weaving all turned green. the hanging cloth
Grew leaves of ivy, part became a vine,
What had been threads formed tendrils, from the warp
Broad leaves unfurled, bunches of grapes were seen,
Matching the purple with their coloured sheen.
And now the day was spent, the hour stole on
When one would doubt if it were light or dark,
Some lingering light at night’s vague borderlands.
Suddenly the whole house began to shake,
the lamps flared up, and all the rooms were bright
With flashing crimson fires, and phantom forms
of savage beast of prey howled all around.
Among the smoke-filled rooms, one here, one there,
The sisters cowered in hiding to escape
The flames and glare, and, as they sought the dark,
A skinny membrane spread down their dwarfed limbs,
And wrapped thin wings around their tiny arms,
And in what fashion they had lost their shape
The dark hid from them., Not with feathered plumes
They ride the air, but keep themselves aloft
On parchment wings; and when they try to speak
They send a tiny sound that suits their size.
And pour their plaints in thin high squeaking cries.
Houses they haunt, not woods; they loathe the light;
From dusk they take their name*, and flit by night.

* take their name: ‘bat’ in Latin is uespertilio, from uesper ‘evening’; In ’flit by night’ Ovid also alludes to its Greek name, nykteris, from nyx ‘night’. In Nicander’s much more elaborate version of the story the sisters are changed into a bat, an owl, and another, unidentified, bird. (Melville, 399) 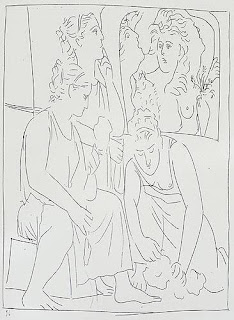 
"In more recent years translations have appeared in the USA whose main value is as a warning of the difficulty of the task," [xxx] says A. D. Melville in his “Translator’s Note.” Bold words.
Presumably he has in mind Rolfe Humphries (1955) and Horace Gregory (1958), but it's hard to see just why he supposes his own pentameters so superior to theirs. I suspect Charles Boer had this remark in mind when he commented on the "pedantic and dull" nature of the several British attempts to represent the Metamorphoses in verse.
Melville's lines may be unexciting, though, but his book is clearly laid-0ut, engagingly annotated, and generally extremely accessible, especially for the first-time Ovidian. 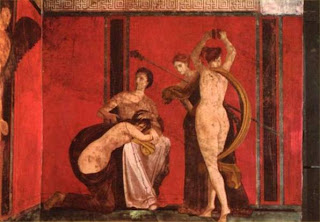 And why the daughters of Minyas? What is it that interests me about them? Is it the fact that they are turned into bats as a consequence of scorning Dionysos, the god of wine? Dionysos / Bacchus, of course, was the son of Zeus and Semele, conceived before she was burnt to death by seeing the god in his full glory, and rescued from her corpse to be gestated in his father's thigh.

They reject the god in his several aspects as maiden, bull, lion and panther, and as a result one of them, Leucippe, tears her own son Hipassus to pieces and feasts on his flesh.

This idea of the necessity of losing control and submitting to the judgements of the god of intoxicating drugs offers an interesting contrast with our own culture's desire to maintain rationality at all costs.

Whether they became bats or (as other authorities have it) a mouse, a screech-owl and a barn-owl, it's clear that they are guilty of preferring their own ontological certainties to the expanded horizons offered by the god.

Semele was punished for her presumptuous attempt to attain immortality by seeing her lover, the god, as he truly was. The Minyades appear to exemplify the opposite fault, lacking (as they do) the attention-span even to pay heed to their metamorphosing visitor.
Posted by Dr Jack Ross at 9:30 am

It's great to read this - I have this edition - from memory Melville doesn't claim to be the ultimate in translators - he admits he had to make concessions - the usual spiel by translators -I think he also mentions Pound positively.

Reading this I wish I had persisted with Latin in 1964 or so..obviously (obviously?) there is no substitute for reading it in Latin - or is there? - are all the many versions new (all variously and equally valid or not) poems all springing infinitely from the head of The Eternal Translator?

To maintain one's ontology utterly is partly in the rational the "real" -interesting this cult of Dionysus. In the 60s drugs were everywhere in Auckland and the Western world generally ('syphilisation' Shadbolt called it) - I never used them - but I saw young men destroyed by such as LSD. IN about 1969 - 73 or so we in the PYM (it was backed by the Communist Party) opposed drugs as being another opiate of the masses and even we were wary of alcohol - I didn't drink in thsoe days - I didn't drink until about 1990 and that was only so as I could read poetry live or get the Dutch courage to meet women... I have since basically stopped drinking. The alcohol and drugs are poison and destroy that greatest liberator of consciousness - the mind. They are not needed...but the bacchic struggles dialectically and constantly with the rational and the so-called real. Reason versus or in struggle with Romantic madness working to a fiery transform. A new thing.

But Ovid the artist is caught in the endless transforming turmoil as rationally he writes of the mad and the strange.

It seems to me that there is a preoccupation in Ovid with the question of the capacity of the human being to transform inwardly - to change endlessly what one is to oneself. And yes this is an irrational, even if conscious and wilful, capacity. What exactly stops us from getting lost in ourselves, changing too much - from becoming gods? That's the second thought I've been having - the idea of change as God. And I guess it's interesting to make something of the the semi 'divine' irony of Metamorphoses 'lost-in-translation', though I think Ovid himself would probably be far too busy worrying about the implications of what his words were saying to his all-too-human contemporaries than what they might say to us, his distant descendants. The fact is that that the poem warns repeatedly - raves - of the dangers of self-deification literally within earshot of Augustus himself. Not surprising perhaps that Mr. Ovid was packed off to Timbuktu after a while.

I guess to explore this seriously, I'd need to read Ovid in terms of the tradition in which he wrote to see how or whether his voice contrasts with the norm in this respect. In any case, I don't find Metamorphoses (so far) a convincing glorification of Rome (as in the Aeneid).

A more personal reaction I had to the work took place in the form of a dream. I was pushed backwards by a Carl Steadish Maori Studies lecturer into a kind of air vent. As I went into this dark vortex I was informed that I would almost certainly not survive the experience, unless some divinity intervened. I seemed to be falling against swords - running the gauntlet - though I didn't dare turn to face them. Pretty smartly I shrugged off my Pakeha bashfulness about calling on a Maori god for assistance and yelled for Tane to come to my aid - when in doubt opt for a local. I'm not sure whether or not the forest god heard or answered my prayer - also in the wrong language. Anyway, I seemed not to die. And, yeah I like the point Richard made about the gods preferring to dispense their highly subjective justice through metamorphosis over the death penalty.

Reading Ovid reminds me of reading The Histories by Heroditus - the best gossip column of all time - in the way the stories or fibs or convolutions or whatever just keep on coming like waves - or swords that strike but strangely don't mame. Even when you've read them all, you really are none the wiser as to how things turned out.

Briefly - this is a fascinating comment - I must study it more - I also think that it relates literally to the constant transformation of the physical or physical/metaphysical universe - that increasingly strange phenomena - which is endless - Ovid reads as if written yesterday (hence Pounds use of him in the Cantos) - as Eliot Weinberger said (in 'Karmic Traces') of some of the older poets.

"It seems to me that there is a preoccupation in Ovid with the question of the capacity of the human being to transform inwardly - to change endlessly what one is to oneself. And yes this is an irrational, even if conscious and wilful, capacity. What exactly stops us from getting lost in ourselves, changing too much - from becoming gods?"

This is exciting - Yeats I think was frightened and was fascinated by this.

The translations I have read of other works may not have been good but for me Ovid is THE writer of ancients (Greek or Latin).

But I stopped Latin for Chemistry and soon - and had no Greek* - but Jack and others like him bring the 'trace' as Weinberger (I am reading him just now!) calls it. I have a friend who studied classics at Oxford who swears by the subtlety of Horace's Latin - but my feeling is for Ovid ... Horace may indeed be cleverer - and Catullus was good, great - but...

And at a simpler level these are wonderful stories and the transformations parallel the creative process...I believe Shakespeare was influenced by Ovid - see e.g. Titus Andronicus (based on the rape of Philomel ('so rudely forced'), and perhaps some of the comedies etc

* So I can be berated by Ben Jonson!