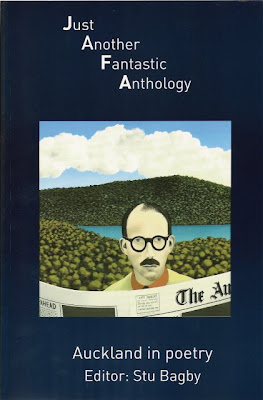 Earlier this year I had the good fortune to receive a copy of Stu Bagby's AUP anthology A Good Handful: Great New Zealand Poems about Sex for review in brief. Here's some of what I had to say there: 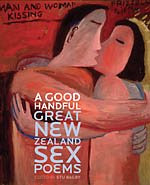 I confess that my heart sank when I heard about this project. The title, “A good handful” seemed just a bit too much of an obeisance to the nudge-nudge, wink-wink tendencies of Kiwi backroom culture, and the claim that 69 poems (or was it poets?) were to be included didn’t greatly reassure me either.

And yet – there really are an awful lot of poems about sex, or which touch upon it in some way. Let’s face it, it’s on our minds; and it certainly isn’t only male poets who go on about it.

That in itself doesn’t guarantee a good anthology, of course, but one thing about Stu Bagby is that when he takes up a subject he really thinks it through.

If you’re looking for a really sexy book, this isn’t it. There’s no real pornography here, though there are certainly some saucy poems. The more I read in it, though, the more impressed I was by the delicacy and tact with which Stu had negotiated these deep and perplexing waters.

“Sex had a lot to do with it,” the Smithyman quote with which he leads off his preface, does (as Stu says) remain “true of both poetry and life.” Before I read this book I wasn’t sure that such an anthology could be compiled without fatal compromises on some level or other. I admit it. I was wrong. This isn’t just a pillow-book for courting couples. I think anyone could read it with pleasure and profit.
- brief #36 (2008): 114-18.

A lot of what I had to say about that earlier anthology applies equally well to this one, Just Another Fantastic Anthology: Auckland in Poetry (ISBN 978-0-473-13767-0) available from a good bookshop near you, or - more directly - from Antediluvian Press for $29.00 plus postage.

The JAFA gag is a good one, I think. "Just Another Funloving Aucklander," as one of our former mayors put it. It's the choice of cover picture that really nails it for me, though - that marvellous Killeen image of a grim geeky-looking guy with receding hairline and barrier-like newspaper, sedulously ignoring the wild volcanic landscape proliferating behind him.

The theme of Stu's anthology turns out to be something very like Killeen's picture: the contrast between "The farting noise of the trucks that grind their way down Queen Street" and "the song of Tangaroa on a thousand beaches," as Baxter put it in his classic "Ode to Auckland" (pp.47-49). Has the latter really been "drowned forever," though, as Baxter claimed? Our poets seem to be divided over the question.

On the one hand there is Kendrick Smithyman, jolted out of the humdrum of his everyday by the apparition of twin yachts tacking below the bridge:

They were ballet. they were sculpture.
Most, they were poems, formalized speaking
to right order, shaping abstraction,
humanizing commerce
between man and man, man and water.

... on the other harbour,
the turbid one to the south,
the one that confounds sailors
with the teeth at its mouth.

... twenty years on from the confrontation,
and as far away from the truth.

"I have not set out to panegyrize the city," claims Stu in his Editor's Note. "Zig-zagging the isthmus from east to west, this is a 'fantastic' portage in the sene of some of the less commonly used meanings of that word."

That is indeed the strength of the book, I think, the fantastic, proliferating variety of its imaginative worlds, from Sam Hunt's flesh-coloured Castor Bay (p.10) to Karlo Mila's "iridescent / trickster / of a city" ("Octopus Auckland:" pp.96-99). Stu's gone to a lot of trouble to include as many as possible of the city's competing, polyphonous voices.

He himself acknowledges "the fact that I've travelled with the baggage of my gender, cultural background, experiences and age," but then of course the same proviso would apply to any other anthologist just as much. A more complete cross-section of approaches and styles might risk dissolving into cacophony. The strength of Stu's work is this sense of a coherent design behind it.

I'm left with the interesting fact that one of the poets I think significantly (though somewhat predictably) under-represented in this book is Stu Bagby himself. The two poems of his which he does include are among the very strongest in the collection. There doesn't seem any better way of summing up the charm and distinction of Stu's book than by quoting from the first of these, "Thorne Bay" (p.11):

... I look out across
the channel to Rangitoto and back
to the rocks which were once one

with that place. And the small
trajectory of time that is this morning
compels the stranger and me to speak,
and when we have done that

we say: "See you later,"
like saying hello to ourselves.

Whaddaya reckon? A good Chrissie prezzie for the out-of-town rellies? We jafas do tend to get kind of a bad press, after all ... 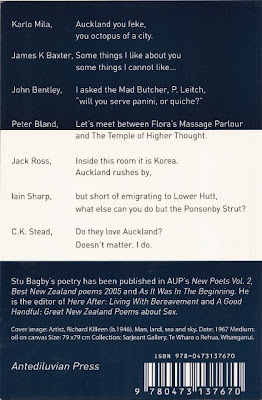 A while ago you wrote in your blog about Stella Benson, and you mentioned in it that Mrs. Benson was buried on a small island (Ile de charbon) in Ha Long Bay, Vietnam.

I would be curious to know where you got this information from?

Im a Westerner down in Asia, and I have started this hobby thing, sort of, trying to locate some historical graves around here, and Im about to try to locate Stella Bensons grave sometimes in the near future now.

Through old French maps I have been able to locate this particular island, but in fact, the only source I have got for this information about this particular island is your blog. The island has changed its name at least 4 times, but what puzzles me is that you use the word "small island", the one I have in my target is not particularly small.

Michael - Did you ever find the grave site or discover any further details about Stella Benson’s burial.
Regards,
Ian Blanden