If you're not doing anything else on Thursday 19th February, you might consider coming along to a poetry reading at the Grey Lynn library. Here's what's up about it on the Auckland Library Website:

Join us for a summer evening of poetry readings.
Thursday 19 February 2009
7.00pm - 8.30pm
Grey Lynn Library
Free event.
Light refreshments will be available after the readings.
For more information, phone (09) 374 1314.

Revive your personal relationship with poetry by coming along to hear four established, local poets at the forefront of what is happening in New Zealand poetry, reading their own original works as well as their favourite works ...
Short biographies of the featured poets (in alphabetical order):

Thérèse completed her MA in Creative Writing at Victoria University in 2006. She was awarded the Schaeffer Fellowship to attend the Iowa Writers’ Workshop in 2007-2008. Her work has appeared in Sport, Landfall and in the anthology New NZ Poets in Performance.

Lee grew up in New Jersey. He completed an MFA in Creative Writing at the Iowa Writers’ Workshop in 2008. He has since immigrated to New Zealand to be with his partner Therese and is now working at Grey Lynn Library. His favourite poets include Wallace Stevens, John Ashbery, and Robert Duncan. 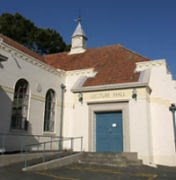 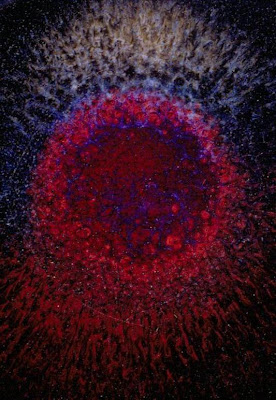 And while we're on the subject of poetry & poetry-related activity, you might also be interested to see the new travelling exhibition of Len Castle ceramics: Mountain to the Sea, curated by Tanya Wilkinson, which has just reached Lopdell House in Titirangi.

There'll be an opening on Thursday 12th February. Riemke and I have been asked to read some poems at the supper afterwards. You can find more details on the Lopdell House Website.

Curious to see my poem? All I can say is that it was inspired by the piece in the picture above and is entitled (somewhat predictably?) "Volcanic Glass":

That line on your thumb
white/ red
exuding blood

clean lines of break
the signs of
manufacture

an intervention
cutting
the subject

Interesting to note that your one was inspired by a particular work or image - were you immediately drawn to it, or did you write on several of them?

I wasn't inclined to zero in on any particular thing but found myself trying to talk about the entire exhibition.

(If I've already posted this comment please disregard this one. My interface with your blog is a bit shaky).

I looked through the whole CD of Len Castle's images, and chose a photo and a work that interested me, then sort of took it from there -- but the actual poem came along as the result of a class cut-&-paste exercise we were doing.

I was chopping up a piece of text about John Donne, which got me thinking about stones and cutting things up generally. I put up the John Donne poem as well a couple of months ago in my "Cats and/or Vases" post.

My sister (Gillian) had a small exhibition at Lopdell House last year.

Good to see you and Olivia with poems.

I am reading (again) your EMO - I was going to go through your other two novels of interest also...but I would have been massively diverted.

So be afraid - I will be soon asking questions!

EMO "grows on me" as I read it - but is one of those books one keeps making excuses not to read - NOTE this doesn't mean it's "bad"!

One request - next novel - a brilliant laugh-a-minute satire? No?

Years ago I read the first serialisation of ...forget title in full ... The New Eve in a Playboy (one of the few I read (or looked at) for or including the story!) ... which at the time I found fascinating ...eerie atmosphere ...I then later found it was by Angela Carter so I now had some of her short stories ['tales' she calls them] ...some remind me...obliquely of (the feeling engendered by) EMO (and differently of Alan Sondheim..who also often disturbs me ...) etc ...but here is a quote from her after word to Fireworks:

[She talks of the Gothic tale or the "fairy tale" of 1001 Nights or Grimm and of Poe etc And she is talking of these long "tales" - not short stories per se...and perhaps not her longer books or novels]

'The Gothic tradition...Its only humor is black humor. It retains a singular moral function-that of provoking unease.'

Your response to this enigmatic and (Rossian?) line?

Well, I'm certainly a huge admirer of Angela Carter, the novels (The Passion of New Eve and, especially, The Infernal Desire Machines of Dr Hoffmann. She and Kathy Acker are at the very top of my pantheon, in fact, along with Borges and Perec.

I guess black humour is the other side of excessive sentimentality -- and thus, yes, is intrinsic to the Gothic mode. E A Poe is the perfect example. He writes weird love elegies to dead and dying young women, suspense stories such as "The Pit and the Pendulum", and then equally effective send-ups of the whole horror genre in pieces like "How to write a Blackwoods Article." It's this flexibility and unpredictability that makes him a great writer, in fact -- not in the least one tone.

Is E M O funny? Well, parts of it might be. I think the second part certainly provoked a few snorts of merriment from me, though the other two are a bit more straight-laced.

Donne! The process of writing is something I've never really thought about before but it's interesting, like how other people dream, or think.

Hmmm, you know Jack, I think I might start spelling your name Jakk since after all this time I still can't persuade you to spell my name the way I do.

(Actually it sounds quite good, like a character from one of your novels or something - Herr Doktor Jakk!)

Hmmm x2 I also see a connection between the exhibition poem and The Passion of New Eve (there's an obsidian scalpel in it).

Jack I'm reading "Fireworks " by Angela Carter. Some of those tales are incredible. She is immense at her best.

Poe I'm not sure of - I have read quite a lot of his stuff - the poem about the raven appears in "Last Exit to Brooklyn" BTW - one of my favourite books.

Perec - yes - I still haven't finished his "Life, a User's Manual" (I love reading it when I do though) but that means nothing I have multiple book part read...I keep getting diverted by something in one book to another! Iwas reading 'Ulysses' again and I startered reading most of Ibsen's plays, then I read "She Stoops to Conquer", but Ibsen reminded me of Strindberg so I read a few of his plays, but then I re-read Madame Bovary (a great book) and started on the Temptation of St Antony after reading an essay on Joyce by Guy Davenport - also Three Tales! (as meanwhile I read Ellemann's huge bio of Joyce!) - a comment by you and somethng in EMO got me reading Henry James (I loved his stories) ... later I started to read Moby Dick, but I was interrupted by reading a bio and art book about Jeffrey Harris and his work while I read his first wife Joanna Paul's "Imogen"; somehow got about half way through Laura Riding's "Progress of Stories" (thought it was a book of poetry and got to this via reading Paul Auster's "The Red Notebook" (great but had to return the Riding ) - a book with CD;s of poets reading got me onto HD and (I want to read some more of May Swensen now - and others I was not so au fait with); and I am reading Balzac also (coffee!) then...there is about 100 Chess books... it goes on!

But I am definitely targeting EMO - trust me!

Certainly there is a tone you share with Carter - I haven't seen much of Acker though - but you EMO does disturb indeed.

I actually quite like Jakk -- sounds very SF. I was once written to as "Hack," which is not quite so flattering -- though quite a plausible mistake when pronounced by a Spanish speaker, as was the case on this occasion.

Jakk Raschetein - something of that ilk - get the thought hat on - everything is in a name.
[Jakk Rockell Jakk Conquest Jakk Stendar
Jakk Jakk Zoliofski Jakk Sven Rakkessen
Jakk "Bomber" Lufthausen etc Other... Jakk Krapposrki...]