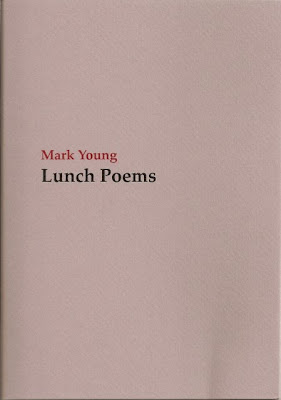 Title sound familiar? It certainly should. 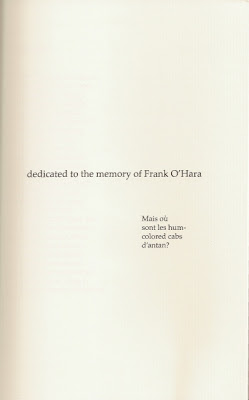 I guess a lot of others grew up on those beautiful City Lights Pocket Poets editions of Allen Ginsberg, Lawrence Ferlinghetti and - of course - Frank O'Hara. The latter's sublime Lunch Poems came out in 1964, two years before his death in a freak traffic accident on the beach at Fire Island.

There've been a lot of collected and selected editions since, but it's still arguably the best introduction to him and his hip, relaxed, laidback aesthetic - "Ave Maria," "The Day Lady Died" or "Lana Turner has collapsed!"

Mark Young's own slim volume is the seventh in Michael Steven's elegant series of chapbooks, issued through Soapbox Press. Here's the list to date:

Interestingly enough (to me, at any rate), the last time I was sent a book of Mark Young's to review was in 1999, when Alan Brunton's Bumper Books put out his first volume of verse after forty years of writing: The Right Foot of the Giant. 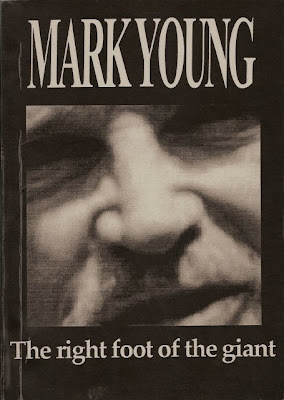 Here's what I had to say then (the review was commissioned by Mark Pirie for JAAM 13, but he ended up not including it in the magazine, I'm not quite sure why - I think he said at the time for reasons of space). I wish I could take some credit for prescience, but it was (at any rate) the best response I could come up with then to a wholly new name (for me) in the poetry firmament.

You see, I wasn't around in the NZ poetry scene in the sixties and seventies, so the Mark Young poete maudit legend was simply something I would eventually read about in the pages of Brunton, Leggott & Edmond's Big Smoke anthology of 2000. 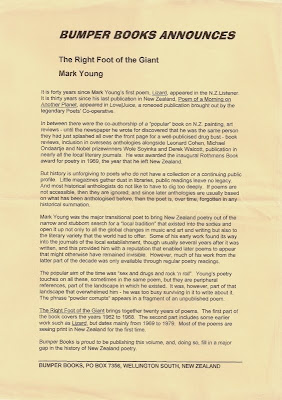 What would you call it? A conjuration of masks, perhaps? You know, the Venereal Game, those nouns of multitude: a pride of lions, an unkindness of ravens, etc. Mark Young certainly runs through a fair few masks in this, his first volume of poems – despite forty years in the writing game. Let’s take them one by one.

On the edge
of a condemned gully, we too await
the graders that will be our guillotines.

Until that night when you fucked me more
ferociously than usual, & I felt carnivore breath
on the back of my neck …
& as you came in me I called you ‘Lion.’

This sad flute was once the white bone
of your thigh, beloved …

Is such a multiplicity of personae a problem? Not if they are personae – but they seem to me, some of the time, rather too close to their originals.

Young’s publisher, Alan Brunton, regards him as a significant, but so far largely unrecognised player in the transition from the regional controversies of the forties and fifities to the more outward-looking poetics of the sixties. Certainly a poem like “Lizard” could easily be read in that way. I wasn’t born when it first came out in the NZ Listener in 1959, but I can see how intensely exciting it must have looked right then:

’Lijah Lizard, put your Woolworth glasses back on.

It’s intensely urban imagery (“I wanted to see the big city. / Still, there is an even bigger one / waiting for me now”), albeit filled with a sense of apocalyptic dread. The strange thing is that this was his “first poem attempted” – and has had perhaps the greatest success of any of his poems. It looks a little out of place here now, as if in inaugurating an era it left little space for the poet himself to manoeuvre, nowhere much for him to go.

I notice that Young makes no particular “important player” claims for himself, though. His engaging author’s note concentrates on the personal: an enthusiastic list of influences, authors, eras. “This book assuages my greatest regret, that I never had a collection of poetry published.” That, to be perfectly frank, would seem to me to be its principal function. I leave to better informed critics than myself the precise determination of Mark Young’s place in New Zealand literary history, but his importance to the average poetry reader is always going to depend on the merits of the individual poems.

Brunton also comments on the “sex and drugs and rock ‘n roll” ambience of so much of his work, but claims that they are “peripheral references, past of the landscape in which he existed … he was too busy surviving in it to write about it.” There’s something in that, I think. If you take away all the “period” details – invocations of all the people one might like to be (“Tristan Tzara, William Burroughs / Han-Shan The Rolling Stones”), jazz stuff, Beat stuff, French surrealism, and so on – there still has to be a distinctively personal voice left behind for us to continue to enjoy Young’s writing.

Is there? I think there is. Funnily enough, it’s a voice (fresh, fierce, frank) which would fit quite easily into the technically conservative, sixties-nostalgiac live poetry scene today. That’s not to say his work is unsubtle, but somehow unreflective, despite the breadth of reference - it's more Frank O'Hara than John Ashbery, if one wants to put it in those terms: more Beat than New York School. As he puts it in “I begin with Crazy Horse”:

Then it was easier. Your heroes
were alive, at least in mind.

“The shining images of youth” … those days of hope when internationalism, in the form of the Beats and the French New Wave, first came to rid the land of its demons. It’s nice to see that that the second part of this book, ‘A Bestiary for Borges’ (poems mainly 1969-79) is stronger (though, admittedly, less unified) than the first, which dates from 1962-68. I take that as a promising sign. With Mark Young, now that this history has finally seen the light of day, the best may yet be to come. 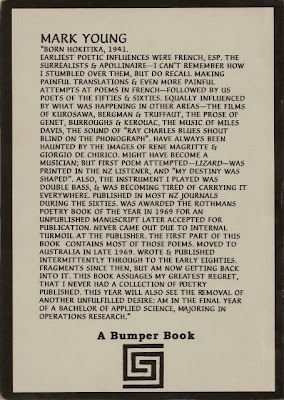 God, that sounds patronizing when I reread it now! I suppose that's the real reason Pirie wouldn't include it in his magazine.

There are a couple of good points hidden away in there, though, I think, if you strip away all the portentous bullshitting about Young's "place in NZ literature." First of all, the masks are certainly there, and clearly identifiable - I just didn't realise how much of a feature of his mature work they would become. There's a persistent tendency to duck and hide the moment a particular method or approach becomes identifiable in his poetry. Now I'd see that as a strength. I did then, too, I think, but was just a little doubtful about how many stances there'd actually been over that long haul between 1959 and 1999.

Second, my identification of the second part of the book, ‘A Bestiary for Borges’, as the stronger of the two, seems at any rate a little prescient. I'm not sure that anyone then could have foreseen the profusion of blogs, books, chapbooks, magazines and styles that Mark Young would go on to pioneer over the next decade, but at least I could see the best was yet to come.

If you want to see at least a preliminary bibliography, I recommend his author page at the nzepc as a good starting point.

Beyond that, what should I say about this particular book, the one Michael Steven has just put out? It's Mark Young. It's hip, streetwise, unaffected, urban & cool. It's a lovely tribute to its predecessor, Frank O'Hara's book, 45 years on from its first appearance.

I could go through the poems and talk about them individually, but what I like best about them is their sense of flow, their updated version of the O'Hara list poem ("I do this / I do that") in a new, electronic continuum.

Mark Young certainly is a poet for our times. I see now, as I couldn't really see ten years ago, that it's because of that long haul from 1959, not in spite of it, that his relentless trying-on of new hats has become a series of Borgesian avatars, not the set of exercises in the currently-prevailing fashionable styles I then thought it.

I would be interested in buying a copy of this book - looks interesting.

Jack - did you follow my explanation of the Chess conundrum on the cover of one of your Arabian Nights books?

No, I'm afraid the chess problem was a bit above my head, but it sounded pretty similar to what the book's author had to say about it inside, so I imagine you must have had it right.

Michael Steven's the man to go to for the Mark Young book ...

Jack - thanks for this. I've just been re-reading "The right foot of the giant" and will be getting Lunch poems

Jack - it was right -
but here is problem I couldn't solve - how many square are there on a chess board!??

I gave up on that. Someone on a
chess site I'm on gave the formula but when I protested that I had spent hours trying to work out the formula etc and still couldn't understand their formula - some wit said all you need to know are the 64 squares the pieces go on!

Chess maybe symbolises the infinite (altho von Neumann in his game theory said it wasn't a game as it could theoretically be solved - )and he was right - in fact he was about most things in maths) - the number of possible games is about that of the number of atomic particles in the Universe! (But it is still a finite number).


I saw a set of Arabian Nights in a book shop in town (s/hand) but one vol was missing!! It always is the case!); I forget the authors but the shop wanted $44 per volume. I think there were 12 vols or so.
I might read some of the children's ones I have for sale - were the Grimm's tales influenced by the 1001 Nights? - I have a complete Grimms - beautiful book for sale - I might second it...

Whe I was at Ron Riddell's shop he had a copy of Grimms (it may have been in German) and someone from the German Dept acme into the shop - now the book had been picked up in Scotland by Ron's (former) wife - who actually designed the cover of my book RED - now she knew German and picked it up - but University man (buying for the Goethe Society) was able to price the book for NZ$80 - I remonstrated with Ron that he hadn't done any checking - I said - as they had scoured the world looking do for the book -he could have named his price!! Ron was rueful...and of course the book wasn't his - to add insult to injury!

My asking price in he same situation? At least NZ$1000 - especially if I didn't know how many there were around and how rare and so on - or before I could get an estimate - but Ron just sold it thinking that $80 was lot to pay!!

The joys of books...