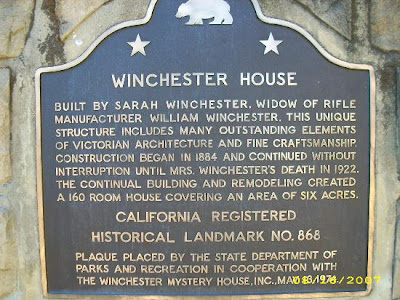 [The Winchester House]
"So what is it with you, exactly?" asked Bronwyn of me, last night. "Is it OCD? Why do you need to spend your time working on these blogs?"

She had me there. I'd just confided to her that I'd spent the day scanning the yellowing pages of my 1985 MA Thesis into the computer in preparation for putting them up online on yet another blogsite, so I guess there was some justice in her remarks.

The best that I could do on the spot was to say that I felt I was constructing a kind of textual labyrinth which people could enter at any point but which would then beguile them into following more and more strange corridors to unexpected destinations.

The Victorians used to talk about a thing they called "Stone Disease." Basically it's the obsession that rich and important people get with leaving a memorial behind them - preferably an architectural folly of some kind: constructed at their orders and built according to their plans. The Academic who mentioned it to us at a meeting recently went on to say that it was particularly noticeable in Vice Chancellors of Universities. They all want to leave behind a building, a campus, a complex - something physical to remind us of their tenure. We're pretty familiar with it in the mayors of major cities, too. What recent Auckland mayor has not suffered from Stone Disease?

Not marble, nor the gilded monuments
Of princes, shall outlive this powerful rhyme

Poets have it too, clearly. Ovid said his verses would outlast Augustus's marble, and - suprise, surprise! - it turned out that he was right. Shakespeare echoed him in Sonnet 55, but went on to add:

but you shall shine more bright in these contents
Than unswept stone, besmeared with sluttish time.

Even better than Stone Disease! Let's call it "banking on posterity" ("BOP" for short) syndrome: the assumption - or hope - that future generations will have more time for your ravings than your contemporaries do.

But then there's the strange story of the Winchester House: 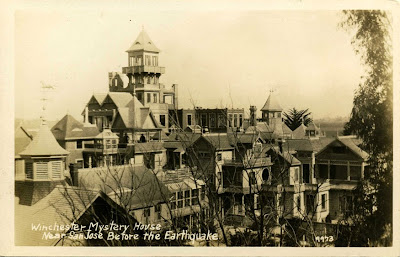 [The Winchester House (then)]

"The curious Winchester Mystery House in San José, California, might be described as a monument to death. Sarah Winchester, one of the most remarkable women in the history of the American West, spent nearly forty years alone in a house she never stopped enlarging.

The story goes that Sarah, who died quietly in her sleep (as far as is known) in 1922, believed that the spirits of all those killed by Winchester rifles had placed a curse on her, the last of the line, but that she might escape the curse by building a house, and as long as the building work continued she would avert ghostly vengeance.

The unhappy widow and mother, whose only child had died within a fortnight of being born, purchased an eight-room farmhouse and then proceeded to rebuild and extend it, work that continued every day for the remaining thirty-eight years of her life, including Sundays and national holidays.

She communed with the spirits each night and, in accordance with their wishes, built or added room after room, balcony after balcony, window after window, chimney after chimney, stairway after stairway, until there were upwards of 160 rooms connected by miles of twisting and turning corridors, indoor and outdoor balconies, steep and shallow staircases; not to mention the scores of trick doors, interconnecting or dead-end balconies, passageways and stairways.

The whole baffling labyrinth was devised by ghosts for ghosts, if we are to believe Sarah Winchester. Certainly, since her death ghostly happenings have been repeatedly rumoured (and reported): footsteps; whispering; the sound of rattling chains; cold spots, icy draughts; balls of red light; and phantom forms." 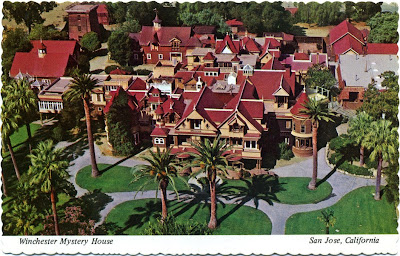 [The Winchester House (now)]
Is that Stone Disease? No, I think it's something stranger, deeper, more visceral than that - fear and guilt. Fear of oblivion, of nothingness. Guilt over misspent time and self-serving actions. Trying to set things right can hardly be seen as frivolous, however strange the manifestations it takes.

So, sure, it's important to live for right now (and any writers who don't have an eye on their present readers rather than some notional future ones is pretty misguided, it seems to me), but constructing a tower or a labyrinth can have a lot of symbolic meanings. Hopefully, even, it can serve a therapeutic purpose - and not just for yourself, either.

In other words, I shall be proceeding with the construction of my labyrinth, but I think I should probably tone down just how much time I spend doing it. It is (after all) by definition not the kind of project which can reach a definitive end - only temporary staging posts. 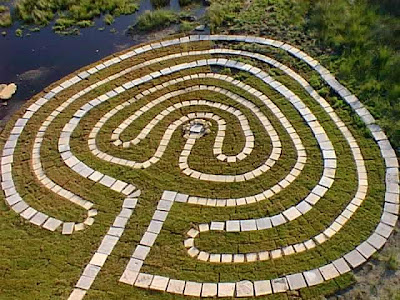 [Labyrinth (Barrier Island)]
Posted by Dr Jack Ross at 8:49 am

"So what is it with you, exactly?" asked Bronwyn of me, last night. "Is it OCD? Why do you need to spend your time working on these blogs?"

I enjoyed Carlin's confession, in 40 Years of Comedy, that he did what he did in large part so that people would go "ain't he cute? ain't he clever?" It has broad applicability, I think. But I had never heard of Stone disease, it's a lovely phrase.

Of course you could take a page out of Milton and tell Bronwyn that "blogs are not absolutely dead things, but do contain a potency of life in them to be as active as that soul was whose progeny they are; nay, they do preserve as in a vial the purest efficacy and extraction of that living intellect that bred them". Which is really an elaborate way of saying "ain't I cute? Ain't I clever?"

(Commenters are occasionally guilty of that too.)

It's true that she's a blogger, too, but there's bloggers and bloggers, if you see what I mean - those who still preserve some sense of proportion in their lives, and those who've let it get way out of hand.

I do like your alternative way of saying "Ain't I cute? Ain't I clever" though - has a real ring to it ...

Well, I admire your labyrinth very much, both for its insights and its accessibility. It is difficult to find blogs touching academic subjects that manage to be those two things so well.

Don't get me wrong - I hugely admire your labyrinth too - I just hope you don't get lost in it, or worse still, find an angry Minotaur at the centre who will eat you up!

Oh, sense of proprtion, schmsense of schmproportions. Having absolutely nothing riding on your blog/life balance, I for one am glad you go about this thing in the particular way that you do. And anonymous is right - you're both cute *and* clever.

Sorry for taking your name in vain, Bronwyn -- I was actually quoting you more because I'd begun to notice certain OCD-like elements in it myself than because I'm trying to defend my practise ...

Yeah, point taken Giovanni, but it's just when you notice evening falling on a task that you began at dawn's first light that you begin to wonder a little. You, I suspect, are every bit as driven as I am ... if not more. And I admire it in you, too.

This might be an easy argument for Bronwyn to debunk, but I'm partial to Daniel Pennac's idea that reading doesn't take time, it creates time, and that the same could be said of writing. I find that somewhat harder to live by as my next self-imposed stupid deadline draws near, but on the whole there's probably something in that.

Jack Jack Jack Jack Jack leviathine and labyrinthine art thou indeed - beware beware the endless stair, the Winchester lair - the stare, the snare - the Begin that ends within the winds of Where

That is a haunting story of the Winchester lady - it reminds me of something that could have been written by Joyce Carol Oates 'Bellfleur') - or possibly Saul Bellow...although we have the ghosts of [et al] Kafka or Borges of course to answer to...

But remember that stone is dead - life is for living.

Yes, I think he almost certainly did. No doubt he had Shirley Jackson's Hill House firmly in mind, too, though.

Gosh, Ross It's blogging of course that has led me to your labyrinthine blogsite, I've enjoyed reading this post because I know that I can come back and look for secret chambers!
I remember being pop psychology tested by a classmate in uni, and told to describe my house as I visualized it... it turned out that the house was representative of my personality, Winchester lady looks haunted alright like an unstoppable growth procedure of atticisms manifest, the clustered spirits all attached, perched on her head, maybe we all need a gargoyle or two, in our blogs... I think I'll add one to mine. :)

Yes, I think I can promise a few secret chambers hidden around the corridors of my labyrinth.

Your own roll-call of blogs looks even more impressive, though ...