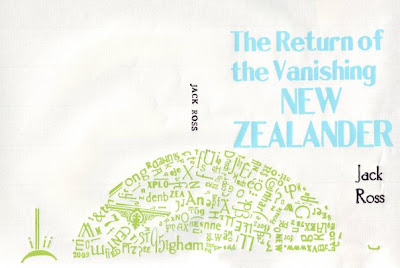 The Return of the Vanishing New Zealander.
Dunedin: Kilmog Press, 2009. 20 pp.
There's something distinctly satisfying about a chapbook. They're so bite-sized, so approachable. I think a lot of people who feel daunted by a full-length, buttoned-up slim volume of verse (let along a Collected - or even Selected - Poems) feel somehow reassured by the lack of fanfare accompanying a self-confessed poetry pamphlet.

Design, too. There's more of a sense of genuine collaboration about chapbooks - book-designers choosing a text more for their own purposes than to serve some author's plan for world domination.

Dean Havard at Kilmog Press has been making a name for himself for his robust sense of design and unflagging industry. I'm not sure just how many books he's brought out to date, but it must be quite a few. He's published poetry books by Jeanne Bernhardt, Peter Olds, Bob Orr, Mark Pirie, Michael Steven - in some cases more than one by the same author - but his list also includes art catalogues and even an edition of the (so-called) Lost Journal of Edward Jerningham Wakefield!

A website is coming soon, apparently, so we'll soon be able to see a list of all his publications to date (though I gather that many of them have sold out already, so you'll have to be in fast). In the meantime, there's also a blog that you can visit.

In the meantime, the books are available from Parsons in Wellesley Street, or directly from the publisher (Kilmog Press, PO Box 1562, Dunedin). They retail for $35.

Here's the sample poem from my own book which Dean put up on Facebook (which enables me to claim a lack of egotism in reproducing it). It comes from the poem "Journey to the West":

thanks for your comments Jack, please mention my blog which has some images of other publications:

Not sure what you mean by so called 'Lost Journal' because Philip Temple has written a few books on the subject and although aware of it's existence, was not able to find it? So for almost a hundred years the journal was not available for researchers or historians to look at - lost. Perhaps a little marketing there, but you should really read the introduction to this journal because it is really an interesting tale of how this journal re-sufaced or was re-discovered.

Oh, certainly nothing pejorative meant by the "so-called" - I guess it was just because it's such a romantic title for a book: lost journals and manuscripts are right down my alley, actually. I'd certainly like to take a look at it, but unfortunately it doesn't seem to have arrived in the Massey library yet.