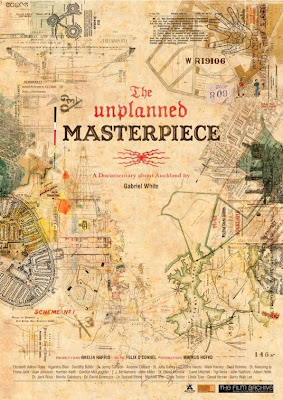 I suppose you could say I'm prejudiced. After all, I am in the film - albeit very briefly, as one of the more than thirty talking heads delivering views on various aspects of the city's history, life and culture - and of course Gabriel and I are old friends and collaborators. But you know, even despite all that, I was worried that he wouldn't be able to pull it off - that the film would come across as quirky or incoherent, or just insufficiently representative.

But it didn't (or didn't in my view, at any rate). I found the film continuously fascinating throughout. I'd actually thought I knew something about Auckland before watching it, but I have to say that there was a great deal there which was news to me. I find it hard to imagine the person who could say that they were already au fait with all the vital, strange pieces of information Gabriel's interlocutors unearth. Their very shrugs and gestures become laden with implication at times as they stare down helplessly at Spaghetti Junction, the Harbour Bridge, or the Ports of Auckland wasteland.

Gabriel allows his thirty-odd speakers to speak for themselves. At times one will supplement or contradict the one directly before them - it's not that the editing isn't artful; just that it doesn't seem intrusive. From the opening description of Auckland as a endlessly fought-over, contended-for space (Tamaki-desired-by-many) to the closing description of its curiously temporary (time-bound - literally) architectural spaces, what comes across most strongly is passion: love for a city which at times can seem anything but loveable.

Balzac's famous story Le chef-d'oeuvre inconnu, the unknown masterpiece, tells of a painter who so elaborated his work that it finally dissolved into incoherence, an immense blur with nothing discernible in it but a single foot. Gabriel's title subtly puns on that. If Auckland is a masterpiece, it must be because there was something at work there beyond the makers' intentions (as in the final passages of Waugh's Brideshead Revisited, where Charles Ryder concludes that the "fierce little human drama" he had participated in might have been justified simply by the fact that it left behind a consecrated chapel for his soldiers to use ...).

Like any city, it is - or should be - the sum of the aspirations of its inhabitants. That's an easy thing to say, but until you hear Gabriel's chosen speakers talk, it's easy to forget or overlook the richness and strange beauty of our own "wasp-waisted isthmus."

Gabriel comments in his work journal that "it was a little deflating to hear the film described by one member of the audience as 'left wing'", going on to say that "one political agenda of the film is to render such Jurassic categories obsolete." It's a punchy film, certainly - one designed (as he himself said at the launch) to get people talking and disputing - but I also think he's right that it eschews any particular rigid reading of the city's history in favour of a kaleidoscopic (but never incoherent) vision of promises broken and betrayed which ended up (perhaps), somehow, with some of them being kept after all.

So, in any case, the main purpose of this post is to advertise the fact that:
Free Screenings
of Gabriel White's new film about Auckland

are on in Auckland Art Gallery's Art Lounge
(on the corner of Lorne St & Wellesley St)
on Sunday 4th October
at 11 am & 2 pm.

It really is worth a look if you have the slightest curiosity about this city.

And if you haven't, and you live here, you should be ashamed of yourself.

[The Unplanned Masterpiece]
Posted by Dr Jack Ross at 8:12 am

Wish we could see it. We only lived in Auckland a couple of years but it was long enough to get curious about its make up.

Thanks for the book references also Jack - I since read the Balzac story.
I would like to have seen Gabriel's film. His short films on YouTube are brilliant.