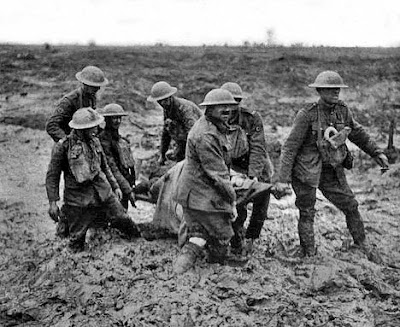 [Passchendaele (1917)]
It seems like ages since I last posted anything on this blog. What can I say? Summer intervened.

I feel like I spent most of it moling through stacks of books and typing up long lists of them for my bibliography blog (still, alas, a long way from completion - though sometimes I delude myself that the end might be in sight).

Bronwyn and I did have a nice little break by the banks of Lake Rotorua, though, during which I managed to read the whole of Anthony Beevor's horrifying account of the Battle of Stalingrad. I found it in the shelves of the friend's house we were staying in.

Which brings me to the subject of history books - more specifically books of military history. I seem to have read an awful lot of them lately. First there were the First World War books:

Some of them I found in my own shelves, others I borrowed from the library. After that I found myself moving on to the Second World War:

Now, however, it's back to the Napoleonic wars, and even further back in time - all the way to antiquity:

Why? You may well ask. I've always been a bit of a fan of such books, but I hope I'm not just one of those war junkies who spend their time prying into the more gruesome details of ancient battles because it gives them some kind of perverted thrill.

I do remember the sheer shock of seeing the Menin Gate and those immense fields of immaculately tended white crosses on the former Western Front when I went there with my parents as a teenager.

I guess my excuse, then, has to be relevance. The more of these books I read, the more applicable they seem to everyday life - my own, where I get to watch bureaucratic decision-making processes on a daily basis - but everyone else's, too, as we all experience the dreary parochial soap-opera of New Zealand politics. 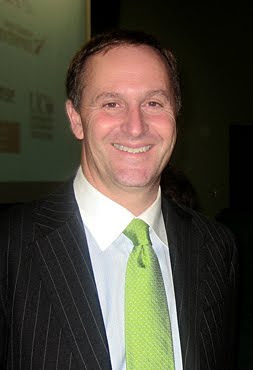 It was interesting the other day, in fact, listening to John Key's response to the news that unemployment was far, far higher than anyone had feared, giving the lie to all his optimistic statements around New Year. His comment was that the recession was very bad, the worst since the 1930s, so there was really nothing anyone could do. "It could be worse," he added with a toothy smile.

I guess an outsider might find it a bit odd to find the man in charge of the overall direction of the nation's finances saying, in effect, that there was nothing to be done and it was all in the lap of the gods. But it's not so surprising if you've recently had the experience of reading William Shirer's appalling, terrifying account of the breakdown of France in 1940 - the pusillanimous refusal to take responsibility for anything on the part of the generals; the active, gleeful desire on the part of so many politicians to grovel before a Dictator (preferably a senile one - like Petain - who would allow them to pull the strings); the instinctive preference of the middle classes for Hitler and his Germans over the opposition at home. It made perfect sense to them at the time, but the harvest was a bitter one.

Watching the way decisions actually get made in a big organisation inspired the following poem, in fact. How else it it really possible to understand why people sign up to a solution they know to be unworkable and wrong? It isn't cowardice, exactly - or even complacency. It's just that things tend to develop a momentum of their own, and it's very difficult for novel and creative ideas to be heard, even, in an atmosphere where wiseacre "realism" rules.

Luckily the consequences seldom entail the violent deaths of half a million men. Seeing Key's complacent, vacant face proclaiming his inability to think of anything to do to reduce unemployment in the slightest, though, made me it far easier for me to imagine him or his kind signing up to yet another pointless, bone-headed war. We've seen his sort before. They used to be called Chamberlain or Herbert Hoover (or G. W. Bush and his toady Blair, for that matter):


Everyone knew it wouldn’t work, but nobody
could think of a way not to go through
with it. Lloyd George knew
Douglas Haig was self-deluded,
believing every ‘intelligence report’
from crystal-gazing Colonel Charteris
– God (after all) was on his side.
Sir William Robertson (Chief
of the Imperial General Staff) knew
Haig was next door to an imbecile
but backed him – lacking better –
against any alternative. Haig knew
the Fifth Army Staff, Gough’s boys,
were capable of stuffing up
the most elegant and foolproof
plan. Everyone knew
it always rains in Flanders
in the Autumn. The result was
the ‘most indiscriminate slaughter
in the history of warfare.’
No-one could find
a good way to avoid it.

Without losing face, that is.

All in all, it's hard to feel that I've been entirely wasting my time with these books.
Posted by Dr Jack Ross at 7:46 am

Jack I've got that book on Stalingrad - I've seen two films on Stalingrad I think. And in the old days I even liked war films but I couldn't read that book. I try to avoid books about war now...or films. (Altho I am threatening to read "Good bye to all That" (or it keeps looking at me asking to be read...and as it isn't just about WW1... and I have read (a part of) a bio of Laura Riding and some of her strange poems and stories...hmm..

Now I need to read the rest of your post!!

When I had book stall at K Road I sold a lot of books about war (mostly the 2nd WW) to bloke who had been shot - not in war (an irate husband had tried to gun him down but he charged the gun and survived!!) - but I was amazed that he felt that war - to him was good thing - or something we needed (like competition or something).

We used to argue...he wasn't as bad as he sounds...the arguments would end with us laughing about it all...(I mean at ourselves not at the topic) he was studying sociology and also he had trauma (from being shot.) His rationales were strange but we are all different... I realise a person can be interested in war without condoning (or sometimes some people celebrate it!) it as such.

Jack - usually "political" or "committed" poems don't work for me, but this poem of your is great - I laughed at the first line:

"Everyone knew it wouldn’t work, but nobody
could think of a way not to go through with it...."

Yes!! And sometimes that is what happens. There is often no conspiracy for war whatever (sometimes there is some or a lot of shenanigans going on )BUT probably more frequently it is what is NOT done...

This poem gets closer to rivaling the best of the "witty" (but I think, if satirical, ultimately sad and caring) Auden ... writing say '1939', 'Spain' or his Tyrant poem or the poem about Yeats and so on (or the one about Caesar and so on all in one common box, jumbled up...